Accessibility links
Custom-Printed Cocktails On The Moon? 'Soonish' Shows Us How Zach and Kelly Weinersmith's accessible, occasionally goofy new book lays out futuristic fantasies (like matter-printed cocktails) and connects them to projects scientists are working on right now. 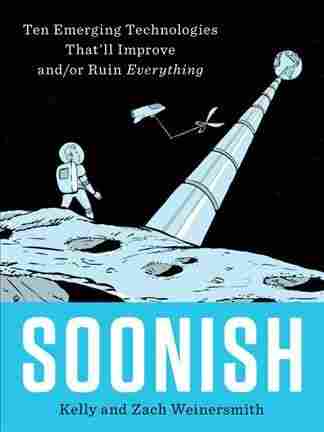 Ten Emerging Technologies That'll Improve and / or Ruin Everything

Here's hoping that within 50 years or so, Kelly and Zach Weinersmith's book Soonish becomes hopelessly obsolete. As we lounge in our self-adjusting hammocks on the moon, reading our daily reports about which asteroids our robots are mining, our matter-printer might produce another round of fancy cocktails. Meanwhile, helpful nanobots will install our new 3-D printed livers to make sure all that drinking doesn't mess with our metabolisms. And we'll smile at each other and say, "Remember that book from 2017 that predicted all this? Can you believe there was actually a time when we didn't have infinite fusion energy powering the space elevator that got us up here?"

Granted, none of this is likely within 50 years. But scientists are working on all of it right now. The Weinersmiths' Soonish: Ten Emerging Technologies That'll Improve and/or Ruin Everything lays out where these projects are right now, and what the upsides and downsides would be if they fully succeeded. From food printers that sound like the Star Trek replicators to fleets of tiny spider-robots, researchers are working to develop new programs and processes that seem like pure science fiction — just as technologies we take for granted today would look like science fiction to people 50 years ago.

Dr. Kelly Weinersmith is a bioscience researcher studying parasites at Rice University. Her husband Zach is the artist behind the web comic Saturday Morning Breakfast Cereal, a lively regular strip that finds immature humor in mathemetical concepts, mature humor in childhood stories, and random humor in topics from biology to art to politics to the sex lives of new parents. Their voices make a natural pairing in Soonish, which addresses heady scientific concepts in an accessible, readable way, with occasional dives into straight-faced, even grim absurdism. (On the legal issues of asteroid mining: "Once the technology comes along to make capturing these asteroids and extracting their resources easier, no doubt we'll end up with space-crime by space-criminals. As cool as this sounds, you might not feel great about it if you're the one with a space-knife in your space-back.")

Should You Leave Grandma With The Robot?

In spite of this mild goofery, and Zack's one-panel color comics adding frequent punchlines, Soonish is mostly serious and informative. The Weinersmiths examine emerging technologies from gene editing to brain interfaces, and talk to researchers and scientists to see what the most cutting-edge experiments in the field look like. Their explanations are full of useful factoids — for instance, one of the biggest barriers to building space structures is that the average cost of getting cargo into orbit is about $10,000 per pound. But Soonish doesn't rely on head-scratching trivia as bland entertainment. The authors expand and expound on this information at length, springboarding into how different engines and rockets work, and how reusable rocket stages, or a space elevator, might shift the balance. From there, they expand to consider how cheap space flight could affect everything from climate change to war.

'Soonish' feels like an inviting primer on current scientific technology. But it also feels like a slightly drunken lecture by a couple of enthusiastic professors.

The approach sounds programmatic, as they break down each technology under the headers "Where are we now?", "Concerns," and "How it would change the world." But the Weinersmiths indulge themselves in Soonish, wandering down any rabbit trails that engage them, from 3-D printed alcoholic Jell-o shots to elaborate metaphors about immense cat-spheres and nerd social habits. And they periodically make themselves and their marriage the butt of their jokes. Soonish feels like an inviting primer on current scientific technology. But it also feels like a slightly drunken lecture by a couple of enthusiastic professors who keep tripping over each other to bring up this super-weird study about students obeying broken robots in an emergency situation.

Soonish doesn't lean too far into utopianism. It's practical about the likelihood of any of these technologies actually working, and about humanity's high chances of messing everything up. But the book still suggests a bright, shining future. It may be shiny because we've all been replaced by murder-bots, or because we're all living in augmented reality. Soonish makes The Matrix seem surprisingly plausible, Keanu Reeves aside. But it leaves plenty of room for all sorts of outcomes. Part of the benefit of the book is that it doesn't promise we'll all be sipping printed cocktails on the moon in 2067. The Weinersmiths just lay out, clearly and with a wry sense of humor, exactly what it might take to get us there.

Tasha Robinson is the Film and TV Editor at The Verge, Vox Media's technology and culture site.