Accessibility links
Having Changed America, The League Of POW/MIA Families Fades Almost 50 years ago, a small group of families started a movement to demand an accounting of the nation's POW/MIAs. They changed the way America thinks about its servicemen and women lost at war. 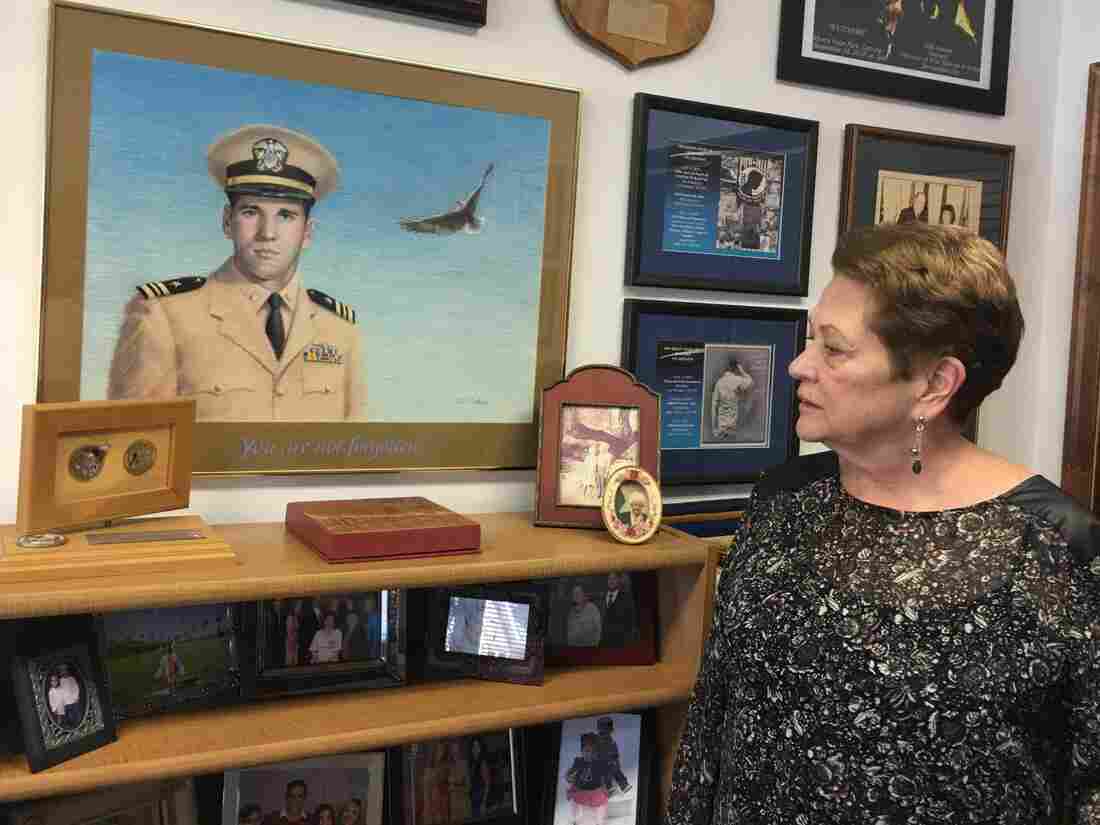 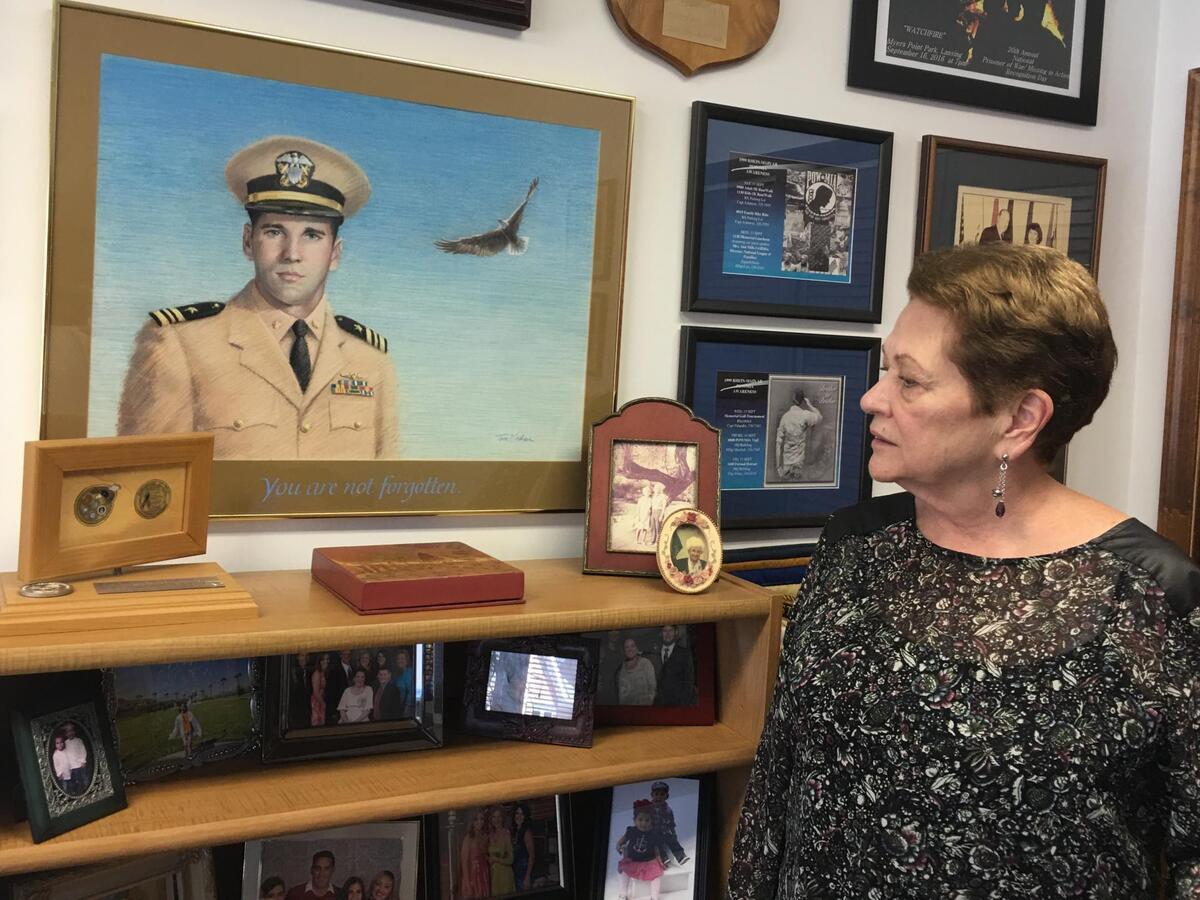 Ann Mills-Griffiths has spent almost 40 years leading the National League of POW/MIA Families. Her brother is a missing naval aviator.

In the late 1960s, the families of American aviators who had been shot down during the Vietnam War became alarmed at reports that U.S. prisoners of war were being mistreated. The way those families reacted changed the way Americans think about missing troops and the government's responsibility for them.

The POW/MIA movement isn't the cultural and political force that it once was, but it's still hard to ignore. The black and white POW/MIA flag with its slogan, "You are not forgotten," is seemingly everywhere. 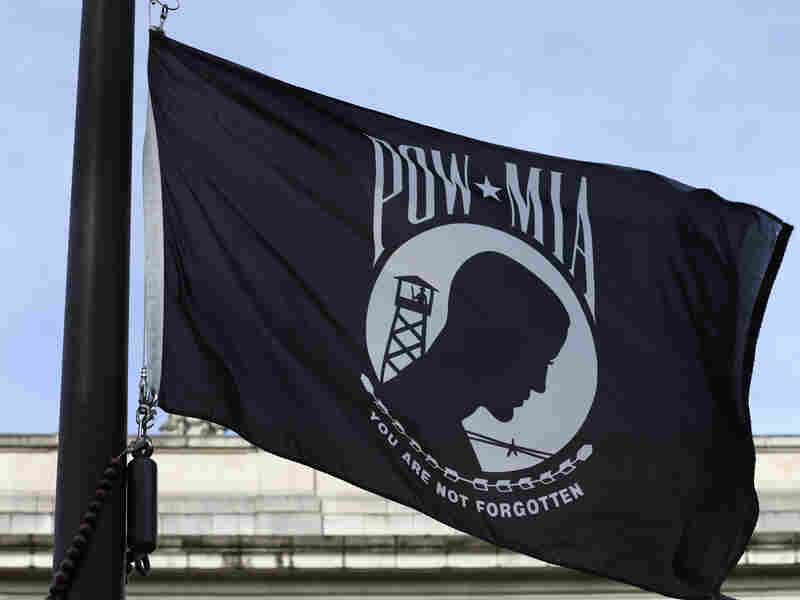 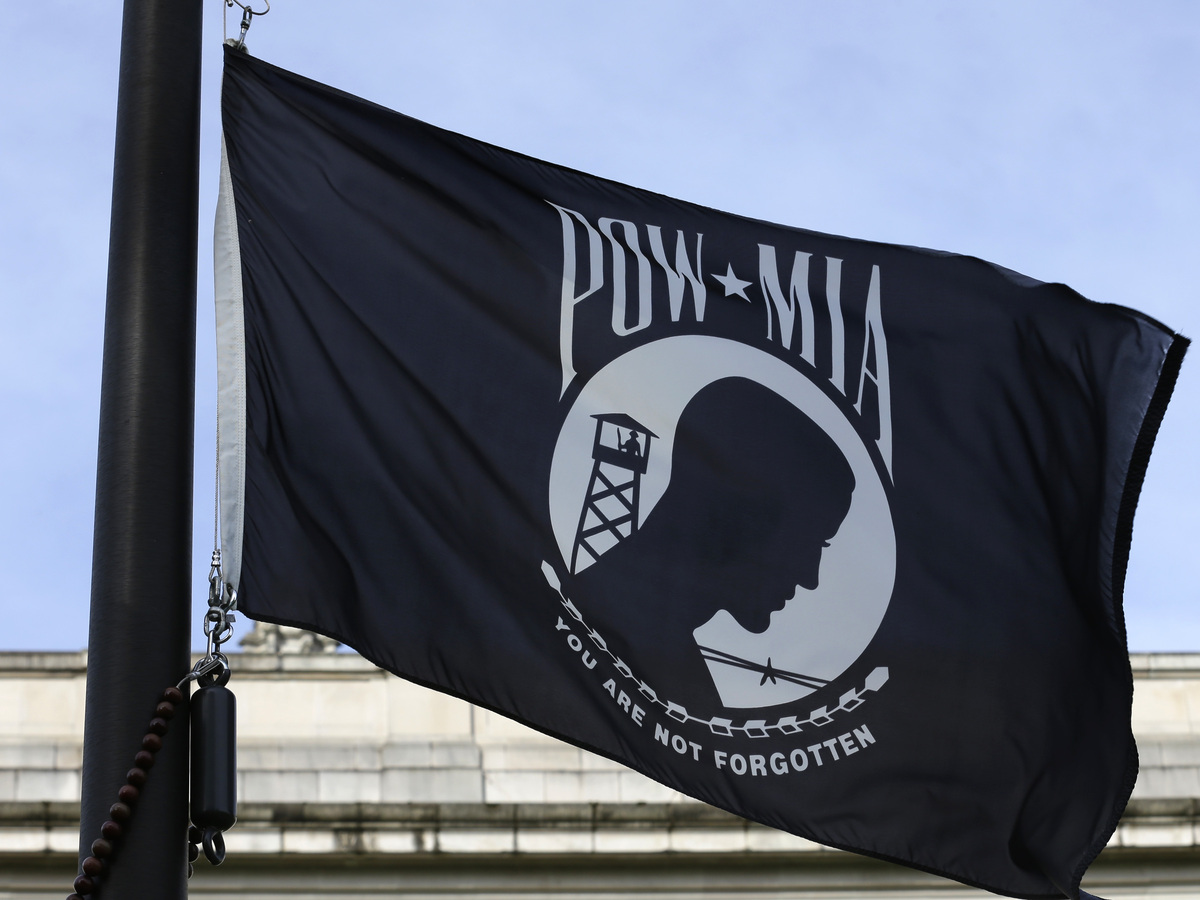 The flag flies at least once a year — and in some places every day — over state capitols. It's also regularly flown at the White House, the U.S. Capitol, the Pentagon, military bases, town squares, schools and homes. In Massachusetts, there's a decal of it on every state vehicle.

A group called "Rolling Thunder" holds motorcycle rallies and other events to try to keep POW/MIA issues in the public eye.

"I know if I died in a foreign land, I would like to know that my country would try to bring me back home so my family would have closure," said David Lynch, the president of a local chapter of the group in Jacksonville, N.C.

Lynch was at an elaborately staged ceremony his chapter holds yearly at a military memorial garden on POW/MIA Recognition Day. About 200 people attended.

"We had a lot of personnel over in World War I, World War II, Korea and Vietnam — not just Vietnam — who died in foreign lands, and the government made no attempt to bring them back," Lynch said. 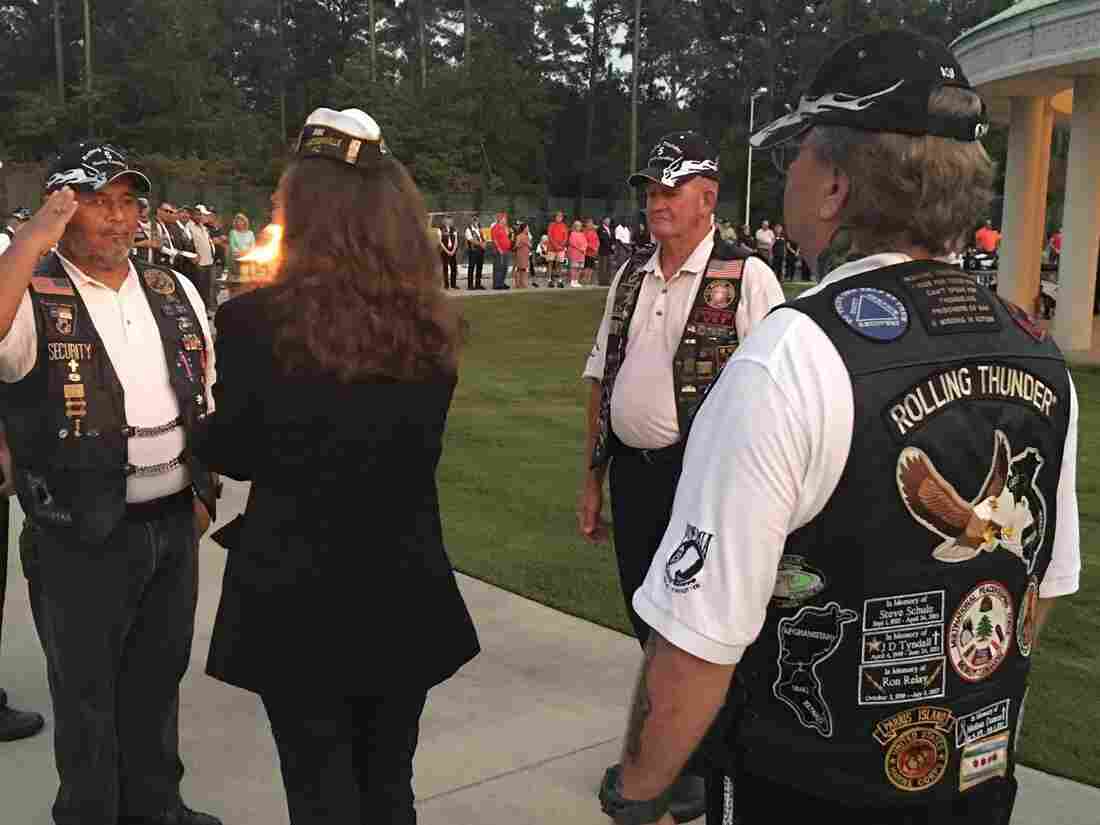 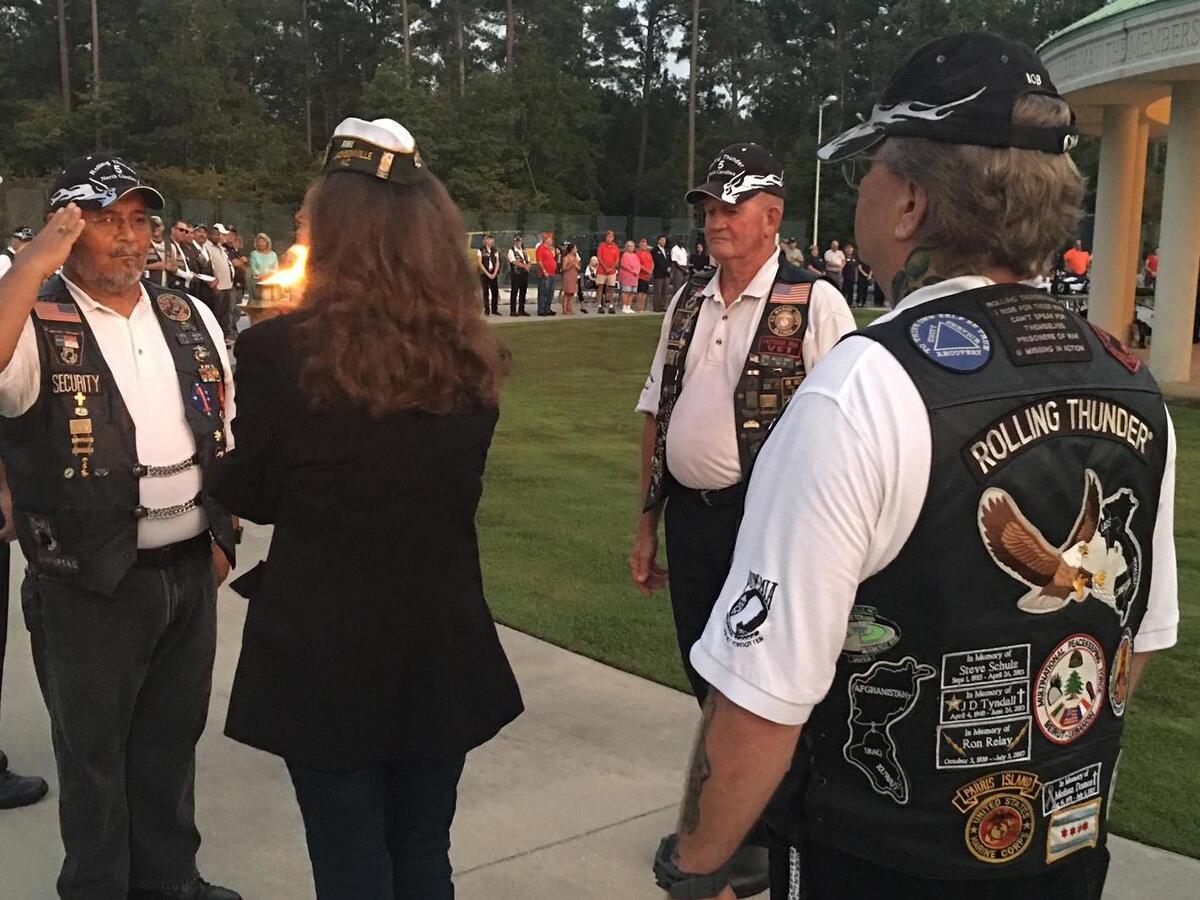 Members of the Jacksonville, N.C., Rolling Thunder chapter pass a flame during a ceremony honoring prisoners of war and troops missing in action.

He was referring to the situation half a century ago, before the POW-MIA movement began.

The pressure the movement created eventually made the government do more to find and identify missing troops, said Michael Allen, a Northwestern University history professor and author of Until the Last Man Comes Home: POWs, MIAs, and the Unending Vietnam War.

Allen said that prior to the Vietnam War, the effort to recover troops' remains was largely handled by the Army's Graves Registration Service.

"After a period of years — historically speaking, it was usually two or three or maybe five years, depending on the conflict — that work was done, and everyone who was still missing was just left missing," he said.

Memorials to "the unknown soldier" were once the nation's response, Allen said, to the thousands of troops missing in America's wars.

With Vietnam, that changed. In the late 1960s, families of missing flyers began to organize. Then, in 1970, they created the National League of POW/MIA Families, which grew and eventually pushed the issue onto the nation's front burner.

It hasn't been easy or simple, said Ann Mills-Griffiths, the CEO and chairman of its board: "It's a constant battle."

Mills-Griffiths is the sister of a missing naval aviator. For almost 40 years, she has been the driving force behind the league.

In the early years, the league struggled for visibility, resorting to things like picketing the White House and United Nations.

Allen makes the case in his book that President Richard Nixon worked to keep the activists supportive of the war, believing that if they demanded an end to the conflict to speed the return of their loved ones, it would turn public opinion even further against the war.

After Nixon, other presidential administrations offered varying degrees of support, but the peak of the league's political influence came after the 1980 election.

"Reagan came along, then gave it the priority and it built from there," Mills-Griffiths said. "Talk about a knight in shining armor."

As governor of California, Reagan had supported POW/MIA activists. As president, he made their issues a national priority.

Mills-Griffiths was the only nongovernmental member of a task force that helped shape national policy on POW/MIA issues, and she traveled to Southeast Asia repeatedly for negotiations. She even held a top-secret clearance. 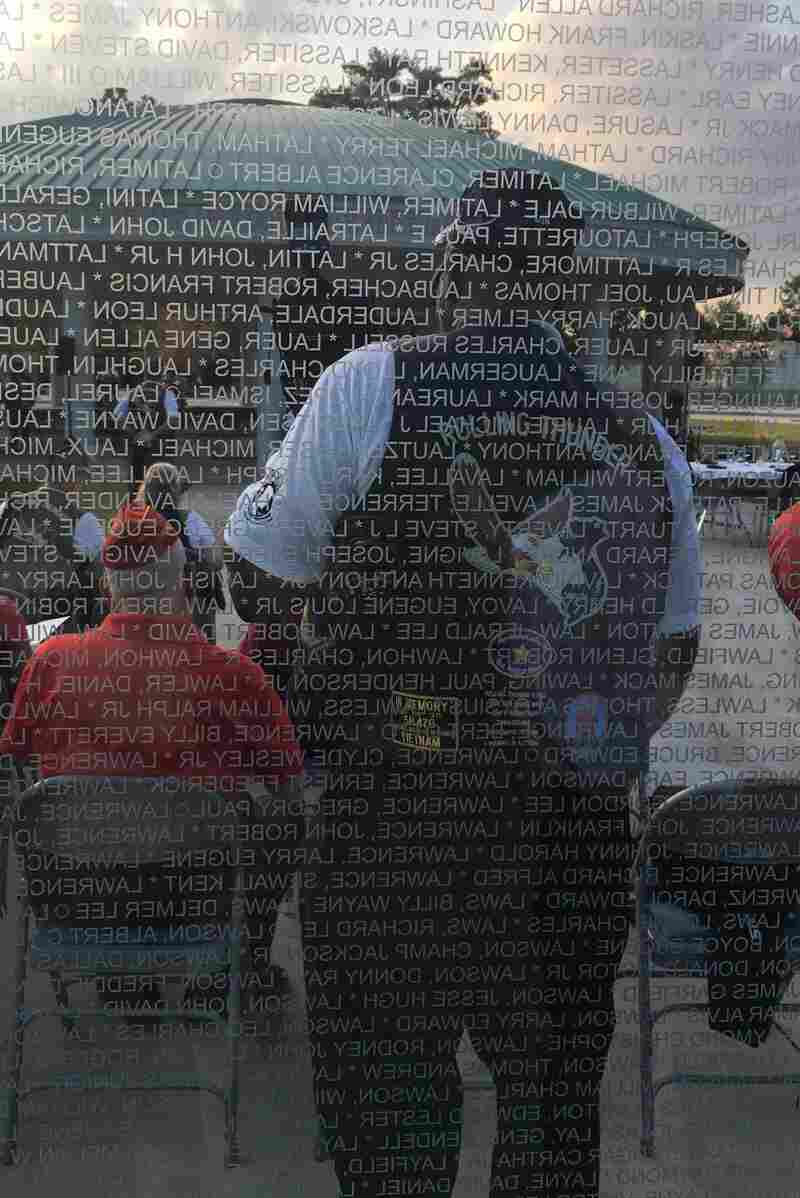 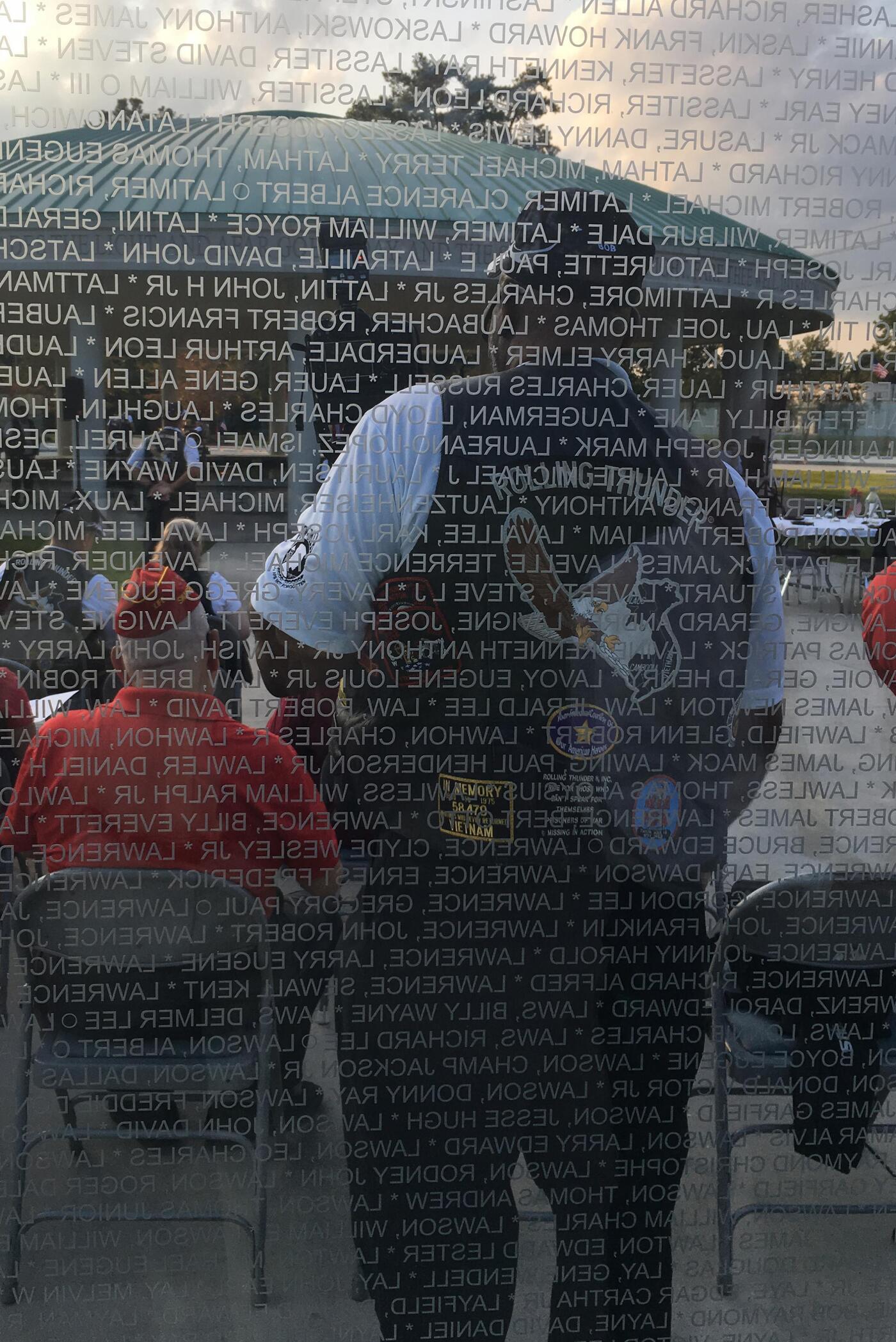 Participants in a "Rolling Thunder" POW/MIA ceremony are reflected in a Vietnam War memorial at Lejeune Memorial Gardens in Jacksonville, N.C.

Her role, Allen said, was unprecedented.

"Every official meeting between U.S. and Vietnamese officials that occurs throughout the Reagan administration involves Mills-Griffiths directly, and this is an extraordinary thing," Allen said.

Mills-Griffiths built relationships with officials in Vietnam, Laos and Cambodia that she still relies on. She became a famously skilled political operator in Washington. And she fought for resources to recover and identify lost troops. The Pentagon now spends more than $110 million a year on the effort.

As support for recovering the missing from the Vietnam War rose, families and veterans from earlier wars started asking for greater efforts to account for their missing.

"This results in renewed efforts to recover the missing from earlier conflicts, and that effort has over time become institutionalized, so that it's ongoing," said Allen, the Northwestern historian. "It's just part of the military bureaucracy."

In fact, most of the 150 or so identifications made each year nowadays are from the Korean War and World War II. Far more service members are missing from those conflicts than from Southeast Asia.

Mills-Griffiths said some cases from the earlier wars are important to resolve, but that Vietnam families are running out of time.

"We are losing the witnesses, and in Southeast Asia the soil is such that it's acidic, and it just eats remains," she said. "And literally the remains are disappearing, so sure, there's a greater urgency."

As a political force, the league seems to be fading, albeit slowly.

It's now housed in a small office park in a suburb of Washington, D.C., that's home to discount dentists and immigration attorneys.

Once, Mills-Griffiths had a staff of six. She now has just one, and Mills-Griffiths herself has been retired since 2011, though she still shows up for work every day. She's talking about writing a book about it all.

But the league's once impossible-seeming goal — the fullest possible accounting of missing service members from the Vietnam War, with an emphasis on "possible" — is now plausible.

"If I walked away today, I'm very proud of the legacy that the league will have left for the country," she said. "And the people that we were able to get back so far — 1,042 since the end of the war. That's quite a few."

Or, maybe just 999. A few years ago, Vietnamese fishermen snagged something.

It was the wreckage of a jet, the one in which Mills-Griffiths' brother, Lt. Cmdr. James B. Mills, disappeared.

His case was one that not even she listed among the "possible." His plane vanished on a night mission with no clues where it might be.

"It was a real disappearing act, a complete unknown," she said. "It was the actual true definition of missing in action."

Now some of that Pentagon machinery she helped put in place is sifting evidence recovered from the site, trying to erase the question mark beside one more name.