Accessibility links
How Steve Bannon's Time In Hollywood Changed Him Bannon, the man who helped steer and engineer President Trump's recent political success, underwent an evolution during his time in — of all places — Hollywood. 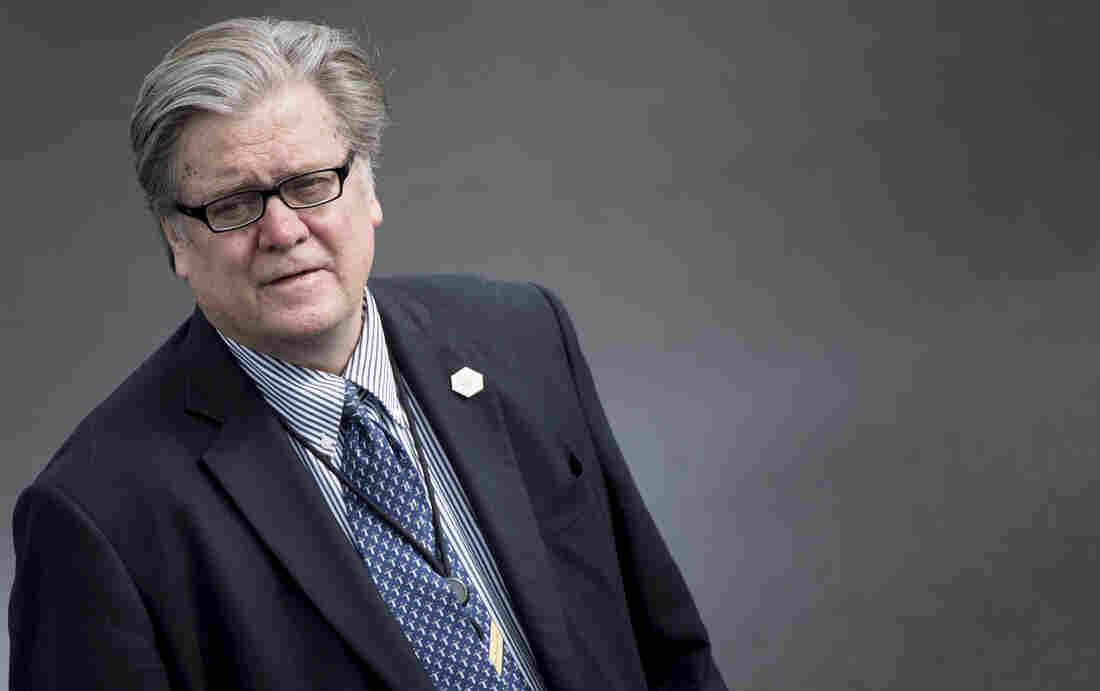 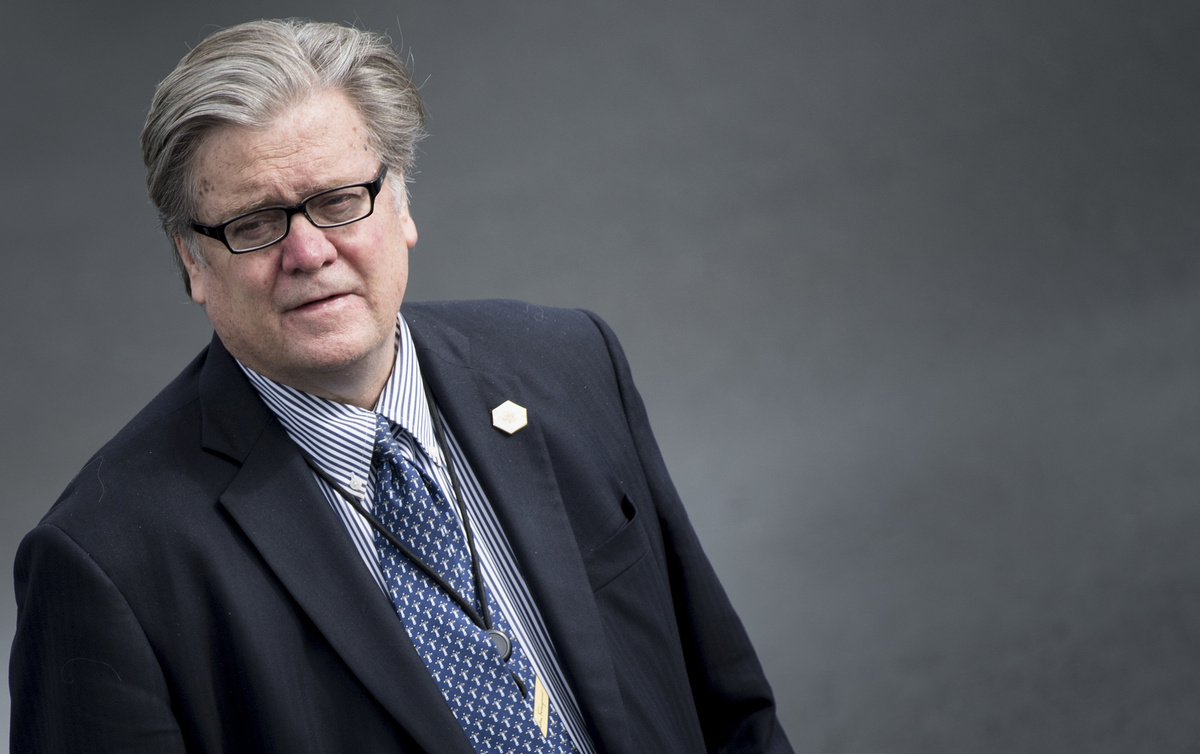 Steve Bannon, former chief strategist for President Trump, has reinvented himself multiple times throughout his career.

If there's one constant throughout Steve Bannon's career, it's his ability to reinvent himself. His resume includes time in the U.S. Navy plus jobs working with Goldman Sachs; Biosphere 2; a Florida maker of nasal sprays; and a Hong Kong company that employed real people to earn virtual gold in the online video game World Of Warcraft.

In August, Bannon returned to run Breitbart News after leaving his job as President Trump's chief strategist, and he is encouraging primary challenges against establishment-leaning Republicans around the country, including some vulnerable GOP incumbents in Senate seats the party needs to hold onto in 2018.

"Right now, it's a season of war against the GOP establishment," Bannon said at the recent Values Voter Summit, an annual gathering of Christian conservatives in Washington, D.C.

But this effort is just the latest chapter in Bannon's ever-changing career, which raises the question: How long has Bannon held his well-known populist and nationalist beliefs?

The NPR podcast Embedded has found new evidence that the man who helped engineer the Trump political juggernaut, underwent a major evolution during his time in, of all places, Hollywood.

Before politics, a search for the next Barney The Dinosaur

Exhibit A in Steve Bannon's evolution might be a 30-minute highlight reel featuring the comedic hijinks of the sports mascot the San Diego Chicken.

Bannon came to Los Angeles in the late 1980s, while he was working for Goldman Sachs. As The New Yorker reported, the investment bank wanted to "expand its presence in the entertainment business." Soon after, Bannon decided to start his own investment company, and got interested in producing films himself.

Around that time, Bannon created his own film company, called Bannon Film Industries, where he worked with his brother Christopher T. Bannon.

The film company, like Bannon himself, went on to focus on politics. Its most famous production is probably the anti-Hillary Clinton film Clinton Cash, based on a book released around the time Clinton launched her 2016 presidential campaign.

But that's not how it started.

In 1993, Christopher Bannon co-wrote The Chicken's Greatest Bits, a 37-minute tape, available by mail order, featuring highlights of some of Giannoulas' act.

"We have a lot of film products we're shopping around," Christopher Bannon told the newspaper, "but 'The Chicken's Greatest Bits' is the first one to carry the Bannon Film Industries banner." 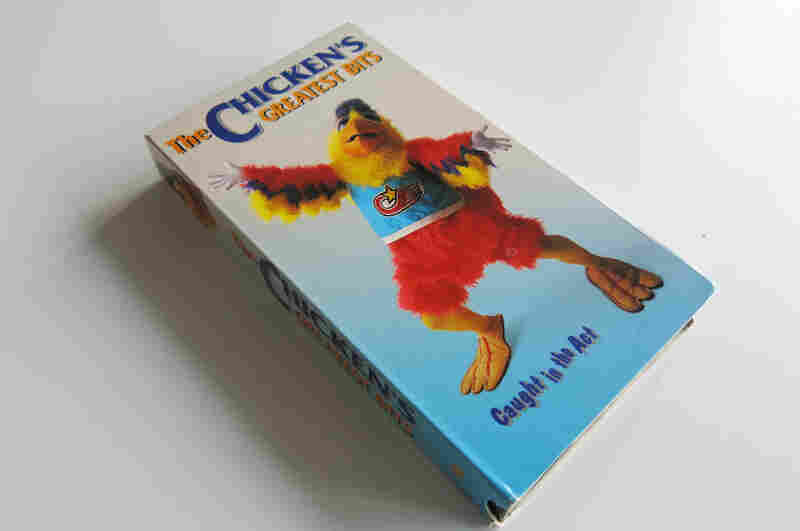 According to the paper, Bannon Film Industries had big plans for The Famous Chicken, including "a series of videos, a possible TV show, toys, games and maybe a low-budget movie along the lines of 'Ernest Goes to Camp.' "

"Ultimately our goal is to build a Barney-the-dinosaur-like industry," Christopher Bannon said. "This video is really just the gateway event into The Chicken industry, as silly as it sounds."

NPR was able to buy the used VHS tape from Amazon for $2.99.

It's unclear how much direct involvement Steve Bannon had with The Chicken's Greatest Bits.

Ted Giannoulas told NPR in an email, "Thanks for the interest, but I don't have anything to add to your story." And Christopher and Steve Bannon did not respond to multiple requests for comment.

But the fact that the film was the first to have the Bannon Film Industries banner suggests the company was not launched with politics in mind.

Mindy Affrime, a producer of independent films who describes herself as a "big lefty," met Bannon in the early 1990s. Affrime says she saw no hints of Bannon's ideology in those days. Instead, she says, he focused on projects with buzz or money attached.

"My opinion about Steve and why he did anything he did while he was in Hollywood was it was the lowest hanging fruit," says Affrime.

"Big thinkers" and Shakespeare in space

Another piece of evidence that Bannon's views evolved in Hollywood comes from Julia Jones, a screenwriter who worked on-and-off with Steve Bannon for more than a decade.

Jones, who is a Bernie Sanders supporter, met Bannon in the early 1990s, and says that she and Bannon planned dozens of projects that had little or nothing to do with politics.

"We adapted Titus Andronicus in outer space," Jones says. "It was a horrible script. Oh, so embarrassing. And we thought it was brilliant!"

Jones provided NPR with a document listing their planned projects as of March 2004, none of which are overtly partisan. This document has not previously been reported.

On that list was a TV show about ancient philosophers and "big thinkers" called "Those Who Knew." ("He was very into Plato, very into Marcus Aurelius," Jones says.)

There are multiple projects on the list featuring melodramatic storylines about naval officers, like "That Hamilton Woman" and "Navy Cross." (Bannon was himself a lieutenant in the Navy.)

There are some hints of Bannon's ideology in that list, like "Weedpatch," a documentary series that would tell the true stories of working-class struggle that inspired The Grapes Of Wrath.

None of these projects ever came to fruition.

Later in 2004, Bannon got involved with a project that actually got made.

It was a documentary about Ronald Reagan called In The Face Of Evil: Reagan's War In Word And Deed, and the film dramatically changed his trajectory.

The film casts Reagan's struggle against the Soviet Union as a war between good and evil. The film's narrator describes communism as just one more example of "the beast," a kind of recurrent evil force that gave the world Bolshevism, fascism and Nazism.

The film was not a major success. It has an 11% rating on the review aggregator Rotten Tomatoes, and the film only grossed $110,000, according to Box Office Mojo.

But then Bannon screened the film at a conservative film festival in Los Angeles, and according to Joshua Green, author of Devil's Bargain: Steve Bannon, Donald Trump, and the Storming of the Presidency, that's where Bannon met Andrew Breitbart. At the time, Breitbart had just co-written a book that excoriated Hollywood's culture of celebrity, and would soon start making plans for his own website.

Breitbart often described using the tools of Hollywood to take down what he saw as the liberal media and political elite. Bannon was attracted to that.

"Breitbart had this effect on a lot of people not just Steve Bannon," Joshua Green says, "the idea that he was this kind of pied piper, who was doing something very fun and exciting and important and doing it you know in the belly of the beast — in liberal Hollywood."

Around that same time, Bannon also met David Bossie, the head of the conservative group Citizens United, a key source of funding for conservative documentaries. Bannon and Bossie would both go on years later hold top positions in Donald Trump's 2016 presidential campaign.

And at that point, the list of projects from Steve Bannon and Julia Jones changes. Jones provided NPR with a second document from November 2004, which includes many overtly partisan projects.

The bottom of the document also includes this paragraph, "The key to the success of the conservative documentary lies in tying together compatible funding sources, e.g., the NRA, church and political groups, while leveraging off the media base of AM Talk Radio and Cable news."

At some point, Jones says, Bannon told her he wanted to be "the Leni Riefenstahl of the GOP."

Riefenstahl was an infamous and highly effective German propagandist, who made films for the Nazis. And it seems Bannon has embraced the association.

Jones says Bannon simply became too political for her, and the two eventually parted ways.

Subsequently, Bannon focused on political documentaries like District of Corruption, Generation Zero and Battle for America. And while obtaining funding for independent films proved difficult, Bannon found a steadier stream of funding for conservative films.

That strategy ended up propelling Bannon to Breitbart News and eventually his job as chief strategist at the White House.

Bannon learned from Andrew Breitbart how to use the tools of Hollywood against its elites. Now he's trying to take those lessons to blow up the Republican establishment and keep himself at the center of American politics.