Accessibility links
No One's Hands Are Clean In 'The Butchering Art' Lindsey Fitzharris' new book about the horrors of Victorian medicine and the introduction of antisepsis is a vital, effective history — but perhaps you shouldn't read it with a full stomach.

No One's Hands Are Clean In 'The Butchering Art'

No One's Hands Are Clean In 'The Butchering Art' 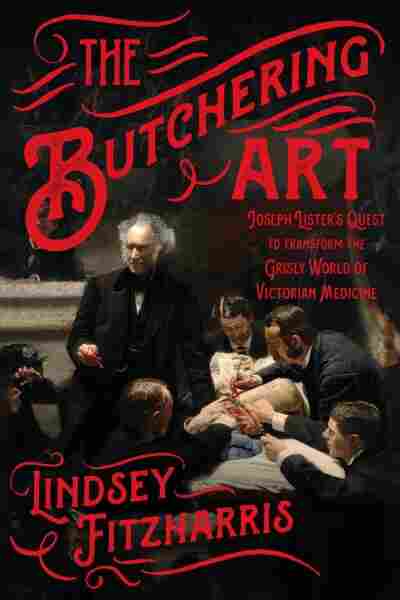 To read The Butchering Art, you should have a stronger stomach than mine.

The book makes no bones (pun unfortunately intended) about what you'll find inside — it's subtitled Joseph Lister's Quest to Transform the Grisly World of Victorian Medicine, so you're duly forewarned. And I thought I knew more or less what I was in for. I knew about the disgusting sanitary conditions in 19th-century hospitals; I knew about the much-too-slow development of anesthesia; I knew the chilling quote from Dr. Charles Meigs about the impossibility that a doctor could carry disease on his person between patients: "Doctors are gentlemen, and a gentleman's hands are clean." I still wasn't ready.

At heart, it's a slender but effective biography of Lister, the sort of comforting historical figure more interested in his work than his legacy. First as a student and then as a surgeon, he was obsessed with the postoperative infections that killed so many patients that many doctors wouldn't operate on the torso because of the likelihood of death from infection. (Gangrene, erysipelas and septicemia were so prevalent they were collectively called "hospitalism" — the disease you contracted after the doctors had taken care of what ailed you.)

The Butchering Art traces Lister's lifelong obsession with finding an antiseptic treatment, a quest balanced somewhere between serendipity and Sisyphus: His inventor father gifted him the sort of microscope that can see bacteria, and he spent decades trying to figure out what exactly he was looking for. He is a subtle figure, as biographies go — with the exception of his published medical papers, most reactions to his triumphs and failures in "this bloody and butchering department of the healing art" are pulled from private letters to family. His marriage is so uneventful it hardly exists, and nearly all third-party talk of him is about his skill as a doctor and his hunt for an antiseptic cure. He disappears into his work; we're left to be grateful for it.

And after the book sets forth the conditions in which Lister began his life's work, we definitely are. The details are almost unavoidably ghoulish. Lindsey Fitzharris tries to paint a vivid picture without unnecessary gore, but so much gore is necessary — not just descriptions of anesthetic-free amputations, but of patients turned away from hospitals because they were too poor to rent a bed or were incurable and therefore not worth treating. Some of it reads as the brutal relic of a vanished past; some of it reads as a brutal relic of the present. This is a book in which cancer is as immediate a character as any of the gentlemen fighting over corpses in the hopes of surgical immortality.

Lindsey Fitzharris tries to paint a vivid picture without unnecessary gore, but so much gore is necessary.

After Lister makes his great discovery, the book becomes a slightly more remote horror story: Lister trying to disprove those who stood against him as he pleaded for his methods. Fitzharris traces Lister's predecessors, mentors and detractors, all of whose work informed the whole; The Butchering Art is very careful to emphasize the many threads of scientific study that come together in a sea change like this one. And it's equally careful to quietly remind us that in every hospital that dismissed Lister's methods, hundreds died. (Since we already know all the gory details, it feels about as awful as it should.)

Equal parts a queasy outline of Victorian medicine and a quiet story of a life spent pushing for scientific progress, The Butchering Art sounds like something of a niche read. But in an era where science is as much a battleground as it was two centuries ago, there is something that feels vital in a book about horrors everyone accepted as the costs of doing business, and the importance of persistence in seeing results. Just ... maybe don't read it on a full stomach.