Accessibility links
In 'The Floating World,' Family Drama Against A Flooded Backdrop C. Morgan Babst's portrait of a troubled New Orleans family that fractures further during and after Hurricane Katrina is poetic and suspenseful — but the drama sometimes drowns in too much detail. 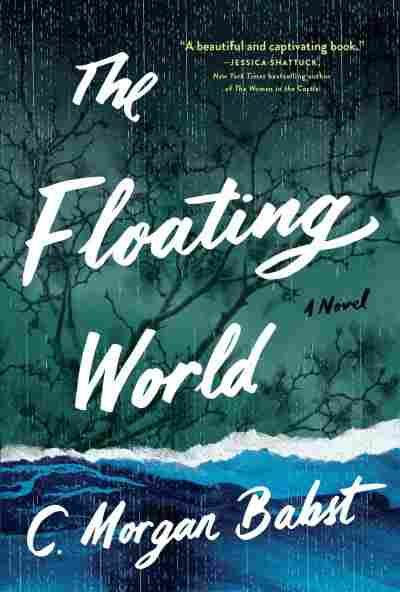 The Floating World is an ambitious novel set in Louisiana immediately before, during and after Hurricane Katrina in 2005 — a family drama unfolding in the wreckage of breached levees, storm surge and plain old wind and rain. Nearly all of humanity saw the calamity play out in wide focus on the news back then. No story was bigger, or smellier, or more unsanitary or frightening. But author C. Morgan Babst goes small — training her focus on a single New Orleans family and its limited cast of friends, lovers and acquaintances. The Floating World explores the Boisdoré clan in extreme closeup — as their relationships build, strain and tear among the ruins.

Of course, that's what water does. It cools what was already cooling, it upends what was never really fixed and it throws together people and objects that have more in common than anyone might think. In The Floating World, Babst takes on the Herculean feat of describing the interior lives of her characters against a jumbled panorama of destruction so vast that no single photograph could ever encompass it.

The language of the book conjures the days after the flood in knowing and often poetic detail:

You almost wanted the water to come back. On TV, the flood had simmered, glinting with sun as the news helicopters ruffled the surface. The water had hidden the mess, lifted everything up, given the city a sense of buoyancy.

And yet, the Boisdorés head into Katrina already askew. Joe and Tess Boisdoré —the parents of two grown daughters — are bickering. He's a black Creole artist whose French-speaking ancestors were artisans of color during Louisiana's colonial period. They and other black Creoles built much of old New Orleans — the French Quarter, the Faubourgs Marigny and Treme. Tess is a white, non-Creole psychiatrist who grew up in the city's tony Uptown set. Some of those families date back to the earliest generations of Americans who arrived in New Orleans following the Louisiana Purchase in 1803.

Babst takes on the Herculean feat of describing the interior lives of her characters against a jumbled panorama of destruction so vast that no single photograph could ever encompass it.

Babst makes plain that the Boisdorés' mixed-culture, mixed-race marriage is not a common pairing in New Orleans, although less formal unions between such families almost always have taken place. Perhaps more than the hurricane, race and culture drive the action of The Floating World. Each family member grapples with some thorny aspect of both, but rarely do the Boisdorés openly discuss the complexities of either. Instead, they appear to nurse their observations, slights, aspirations, victories and disappointments alone and in private. What's done is done could be the family motto. That is, until the flood — when the real screaming starts.

Fractures that existed in the marriage before the storm are exploited by the water, Joe's increasingly infirm father Vincent, and two high-maintenance daughters. The travails of Cora and Adelaide include more than one pressing mystery to be solved, and Babst is adept at building suspense. But at times she muffles the action with an accumulation of detail that appears forced: "a woman obsidian with summer," or "Alice smiled, pink lips gapping over whitened teeth," or "She'd thought her mother had given up Jung years ago." Add to that a dizzying array of flashbacks and dream sequences, and momentum flags.

What's more, Babst brings the reader so close to her characters that intimacy periodically comes at the expense of basic logistics. It's easier to remember Cora's hair, for instance, than where she lives in the city. Logistics are important to this story because in real life 80 percent of New Orleans flooded, and more than 1,500 residents died. The trouble with extreme close up here is self-evident — scale goes missing. The all-too-real population of a great American city must cede focus to a tiny subset of often inarticulate fictional characters.

The Floating World shines spectacularly, however, when Joe's father Vincent Boisdoré comes into view. Vincent is a retired artisan — a widower — whose mind and body are in decline. Babst does a masterful job bringing him to life. Vincent's story is the most simply told of all the characters in the book. He is at once an old man and a child — and in both instances he's happy with the small pleasures of life: Basil. Fried pies. A pony named Buttercup.

Sometimes Vincent mistakes Joe for his father, or a total stranger. He also mistakes his granddaughter Adelaide for the 19th century matriarch of the Boisdoré clan. He's all mixed up, and that's what makes him so relatable: The city is all mixed up too. And, like Vincent, people are trying hard (even now) to hold onto memories of better days.

"You lived through Betsy," Cora said to him. "Do you remember it? What was it like?"

"No, Papie. Betsy the hurricane."

When Vincent wanders off from the family home on Esplanade Avenue looking for a long defunct pie shop, it's impossible not to root for him and his fading faculties.

The Floating World boils down to a single question that plagues coastal dwellers everywhere — When is it time to go? In Babst's hands, the matter is logistical and existential. It's also increasingly universal. At the tail end of one of the most active hurricane seasons on record, more and more people are asking themselves that question every day.