Accessibility links
Democrats Eye A Rare Opportunity In Alabama Senate Race While Alabama hasn't sent a Democrat to the Senate in 25 years, Doug Jones, a former federal prosecutor, may have an opening because of the controversial record of his GOP opponent, Roy Moore. 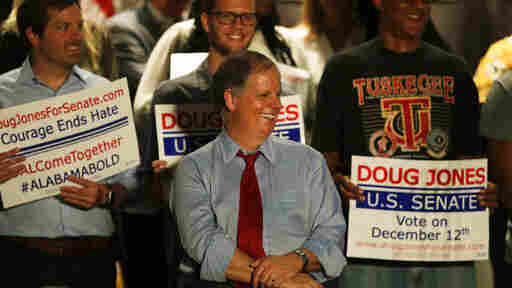 Democrat Doug Jones speaks at a campaign rally earlier this month in Birmingham, Ala. He is campaigning on what he calls "kitchen table" issues, including health care, jobs and education. Brynn Anderson/AP hide caption

It has been a quarter of a century since reliably red Alabama elected a Democrat to the U.S. Senate. But Democrats see an opening in the upcoming special election to fill Attorney General Jeff Sessions' old seat because of the controversial record of Republican candidate Roy Moore, which includes twice being removed from public office.

"We're giving people a reason to believe," said Democratic candidate Doug Jones to hundreds of supporters at a fish fry in Mobile, Ala., underneath sprawling oak trees on the banks of Dog River.

Pat Schwieterman told Jones that she is thrilled to have a viable Democrat on the ballot for a change.

"I feel so alone out here," she said of a state where Republicans hold every statewide office and last voted for a Democratic president when Jimmy Carter was on the ballot in 1976.

Jones, a former federal prosecutor, is in high spirits because in the past week, a new Fox News poll shows the race tied. Most others have Moore up but by single digits — not the advantage you would expect in a state that President Trump won with 63 percent of the vote.

The Dec. 12 special election could be "transformational" for the state, Jones said.

"I think we're going to win this race," said Jones in an interview with NPR.

In a speech, Jones told the crowd he is aware that the odds are against him in this Republican-dominated state.

"It's not the first time that I heard that something I wanted to do, something I was passionate about, was a long shot," Jones says. "When we prosecuted old Klansmen for the 1963 bombing of 16th Street Baptist Church, I was told, 'It's a long shot, Doug.' "

Jones, the former U.S. attorney in Birmingham, Ala., is best known for convicting the church bombers who killed four black girls, prosecuting the case decades after the civil rights era crime.

He is the son of a Birmingham steelworker and is campaigning on what he calls "kitchen table" issues, including health care, jobs and education.

And he is portraying Moore as an extremist. Jones says he won't embarrass the state.

"People are tired of the dysfunction." Jones said. "They don't want more chaos in Washington, D.C., which is what Roy Moore would be."

Moore's campaign disputes that notion, pointing out that he has the backing of Alabama's entire Republican congressional delegation, and endorsements from Sens. Rand Paul, R-Ky., and Mike Lee, R-Utah.

Moore came out swinging during his speech at the recent Values Voter Summit in Washington, D.C., an annual gathering of Christian conservatives. 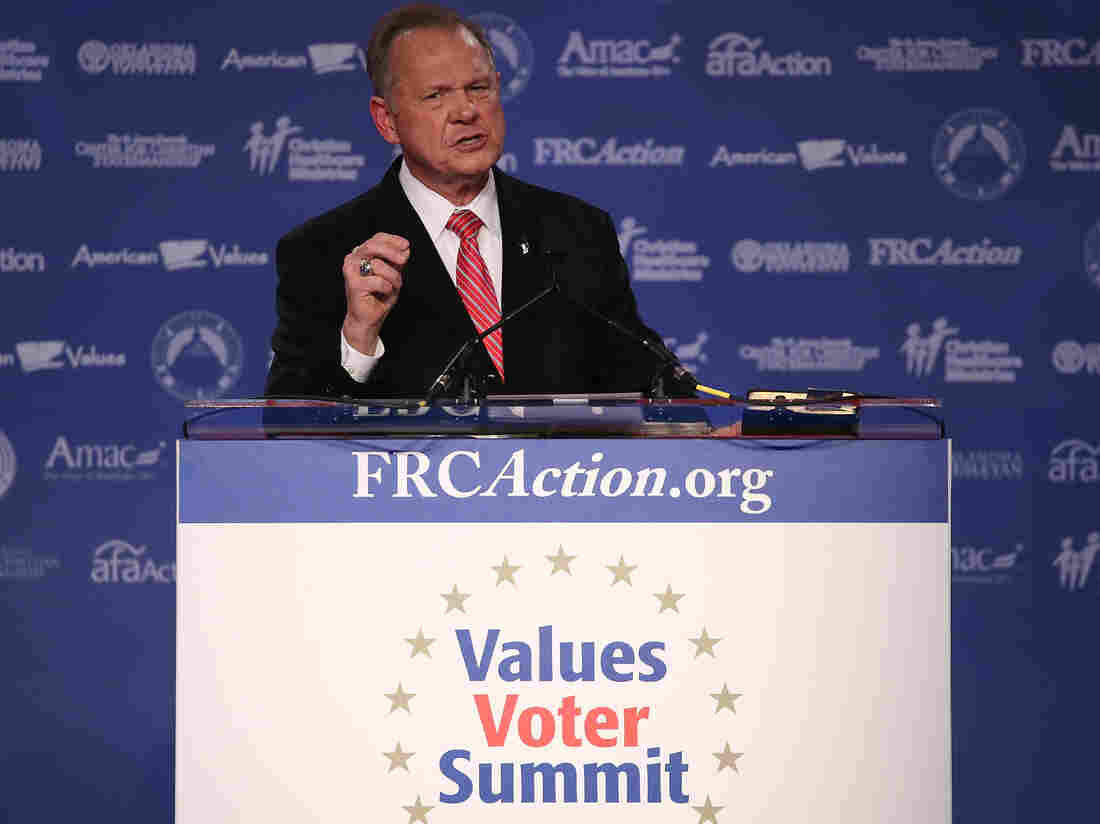 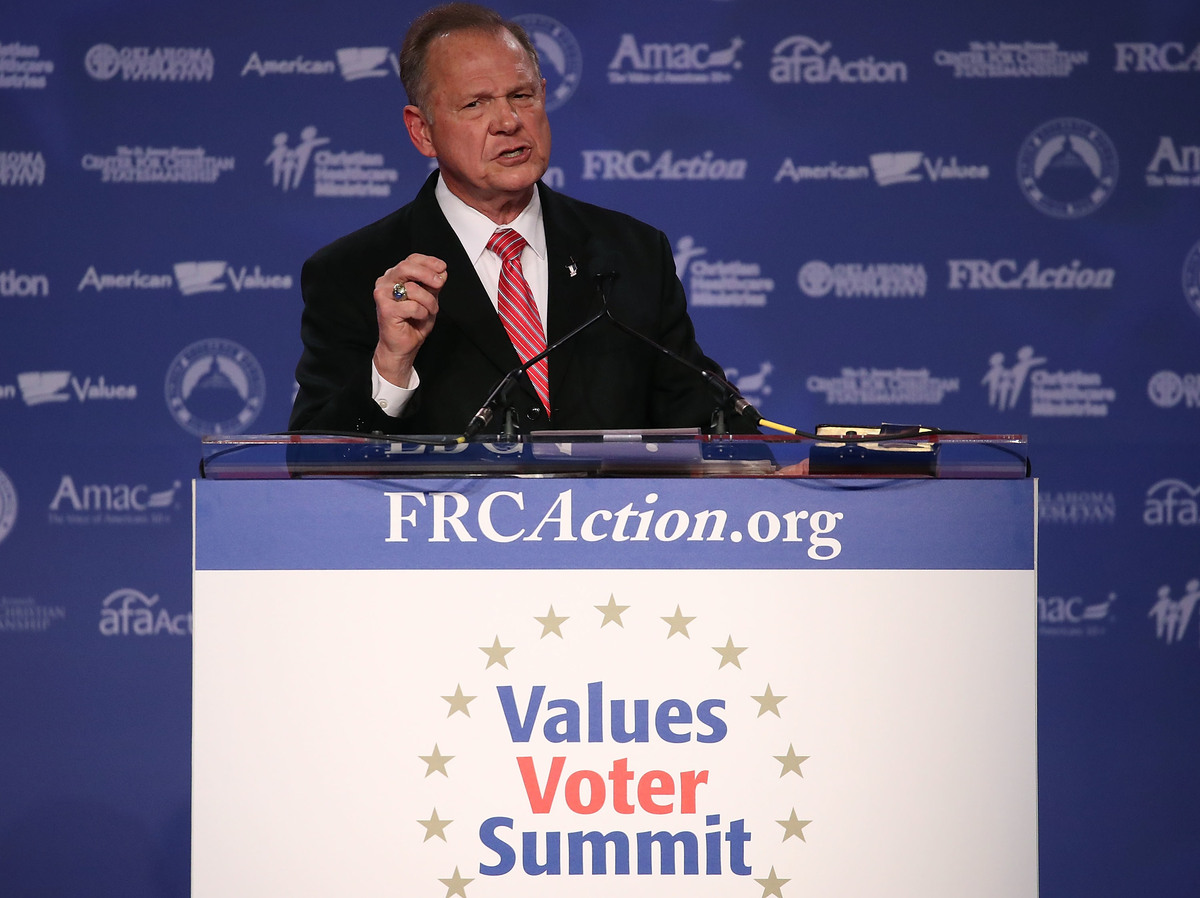 "It's not just a swamp, it's a quicksand," he said of Washington. "We don't have leadership, we have followership. And we've got to get back to understand what our Founding Fathers did and what they stood for," Moore said.

He also said the way to make America great again is to make it "good again."

"We return the knowledge of God to our land and God will heal our land," said Moore to rousing applause.

A darling of religious conservatives, Moore was removed as Alabama's chief justice twice for defying federal courts: once for refusing to take down a giant Ten Commandments monument from the state judicial building and, after being elected to the post a second time, for rejecting the U.S. Supreme Court's ruling that legalized same-sex marriage.

He has said that homosexual conduct should be illegal and that Rep. Keith Ellison, D-Minn., who is Muslim, should not be allowed to serve in Congress because of his religion. Moore and a nonprofit founded by his family — the Foundation for Moral Law — have come under scrutiny for more than $1 million he earned from the charity, now run by his wife.

A reporter recently asked Trump what made him comfortable with Moore serving in the Senate. The president deflected the question and said he was planning to talk with Moore this week.

"And we're going to talk to him about a lot of different things," Trump said. "He ran a very strong race. The people of Alabama, who I like very much and they like me very much, but they like Roy."

Bannon's 'War' With GOP Has Only Just Begun

The question is whether the president will come to Alabama to campaign for Moore before the December general election.

Back at the fish fry in Mobile, Schwieterman is asking similar questions about the Democratic National Committee.

"If nothing else, perhaps the DNC will realize that we're here," she says.