Accessibility links
Khizr Khan Says His Faith In America Is Stronger Than Ever The Gold Star father who made headlines last year after he spoke at the Democratic National Convention has a new memoir, An American Family, about growing up in Pakistan and coming to America. 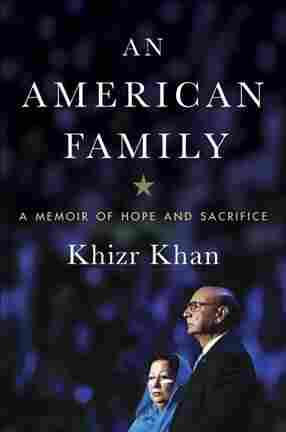 A Memoir of Hope and Sacrifice

Khizr Khan arrives at our studios in a suit, round-framed glasses and a pin on his lapel. His face is familiar: He appeared with his wife at the 2016 Democratic National Convention, challenging Donald Trump's call to ban Muslims from entering the U.S. — and offering to lend the Republican candidate his pocket copy of the Constitution.

Khan and his wife Ghazala became the center of political discussion when Trump questioned their motives and religion, even though they're Gold Star parents whose son, Captain Humayun Khan, was killed by a suicide bomber in Iraq in 2004.

Today, Donald Trump is president of the United States. Khizr Khan is now the author of a book, An American Family, and American is what he considers himself, first and foremost. Khan was born in Pakistan, but when I ask him where he's from, he says Charlottesville, Va., because "whenever anybody asks me, that is the first answer that comes to my mind."

Khan tells me he was the first in his family to go to college, and it was in college that he first encountered the U.S. Constitution and the Declaration of Independence. He says its line about the right to life, liberty, and the pursuit of happiness — those "self-evident truths" — was not self-evident where he lived.

On getting a job in Dubai and meeting his first American

Oh, I lose my composure if I think of him. Allen [Crowell] was my first boss that hired me, in Dubai. What a wonderful man. I had not slept properly for the past two nights, I go report to work, very first day, he looks at me, he picks up the phone and he calls his wife. Within 45 minutes, Lisa shows up, and then he says to me, "Khizr, we have a place for you to rest."

On his lapel pin

On how he felt about Trump's victory and his voters

I do respect their choices, I do respect their preferences and concerns. To some extent those concerns were misguided ... I went to London to participate in a debate, and by some very thoughtful people, I was reminded [of] three things. They said, Mr. Khan, when you go back, talk about these three issues: Nationalism, economic wellbeing, fear of immigrants. These three scripts have been used in Europe twice, First World War, Second World War. Same scripts are being used in the United States.

On how often he thinks of his son, Captain Khan

A similar question was asked of Ghazala, and this is what Ghazala said: "Why do these people ask me that? ... I see him every day. I hear him every day. He is here." Because of our handicap, because of our limitation, we may not be able to communicate directly with them, see them physically. But they are with us. We feel the presence of Captain Humayun Khan every moment, every day.

This story was edited for radio by Arezou Rezvani and Kelli Wessinger, and adapted for the web by Petra Mayer.