Accessibility links
'American Vandal': True Crime That's Fake, But No Less True The minor crime at the center of this Netflix series never happened, but it's less a mockumentary than a hilariously precise dissection of our cultural fascination with true crime narratives. 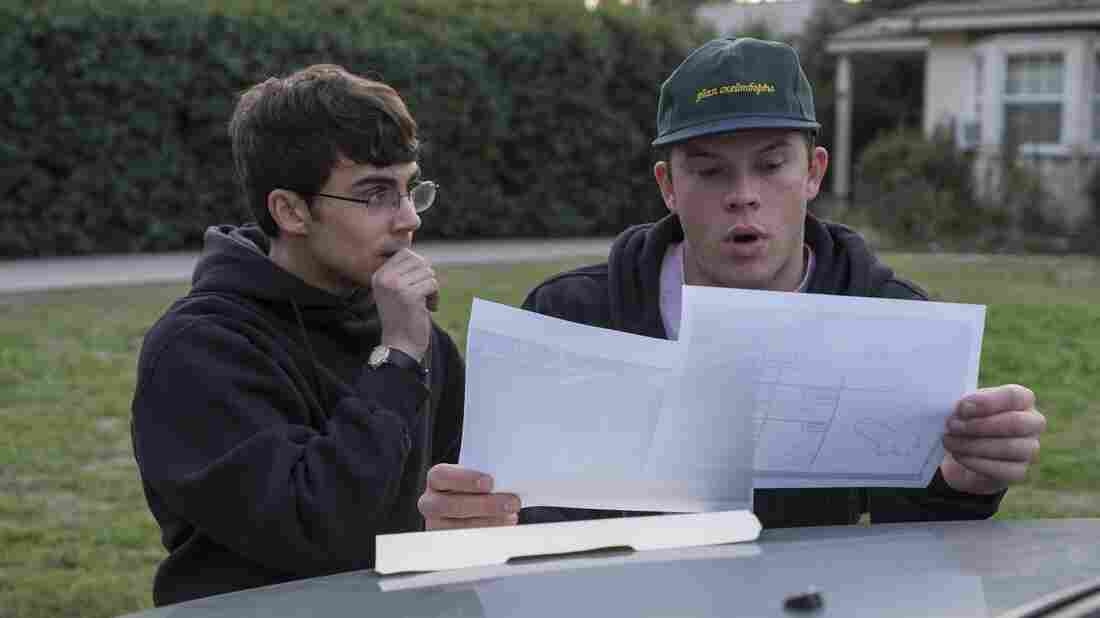 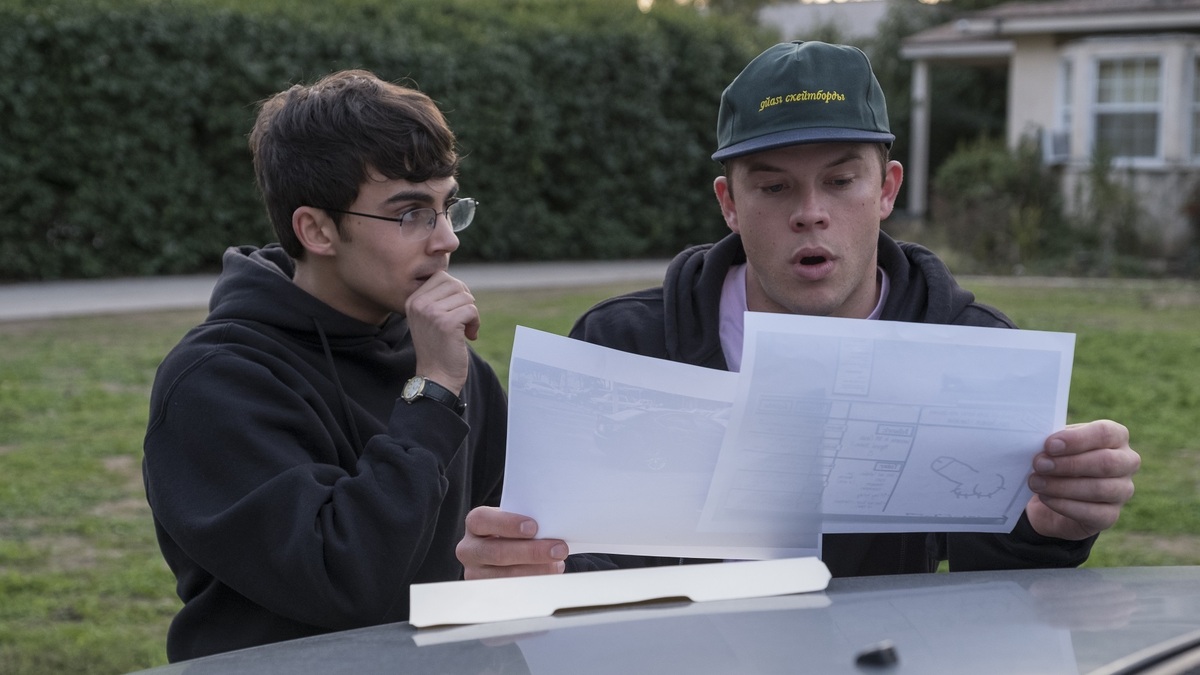 The Long and Short of It: Peter (Tyler Alvarez) and Dylan (Jimmy Tatro) discuss subtle artistic differences in anatomical drawing.

There is a moment about fifteen minutes into the premiere of the eight-episode Netflix series American Vandal when I knew it had its hooks in me.

It's a scene in which two student documentary filmmakers — Peter (Tyler Alvarez) and Sam (Griffin Gluck) — are examining evidence.

They're comparing photographs. One set of photos captures the 27 penises that were spray-painted on 27 cars in their high school's faculty parking lot (the crime that's the subject of their documentary). The other set of photos are examples of the penises that chief suspect Dylan (Jimmy Tatro, turning mouth-breathing into high art) is known for scrawling, every morning, on the whiteboard in the classroom of a hated teacher.

There is much discussion, assisted by a litany of narrative techniques we've seen in true crime documentaries like The Jinx and Making a Murderer — slow pans and zooms, animation, the spare and ominous plunking of low notes on some unseen Piano of Doom — about the stylistic and, um, anatomical differences between the car-graffiti penises and the school-whiteboard penises. Peter and Sam suggest that said differences may prove that Dylan is not the culprit.

"Okay well that's hardly exculpatory," I found myself thinking, "they're rendered in different media, on a different scale, and anyway it's been established that the spray-painter hit all the cars in only a few minutes, meaning that each penis was rushed, and that could easily account for such --"

That was it. That was when I knew.

The whole joke of the show, of course, is how deadpan, how gravid, how rigorously precise it remains as, episode by episode, it documents the investigation of an act of phallus-themed vandalism. That's the goof: All that effort, all that sober attention, all those technical resources that we've grown used to seeing employed to examine a heinous act of violence instead devoted to something so small, so dumb, so juvenile.

And it took mere minutes — minutes! — for me to manage to completely forget all that, and become entirely enmeshed, and stay up until 3:00 a.m. to finish all eight episodes. I desperately needed to find out the answer to the show's central mystery, which if there's any damn justice in the world, will join the ranks of such zeitgeist-defining questions as "Who Shot J.R.?," Where's the Beef?" and "Who Put the Bop In The Bop Shoo Bop?" namely:

The day after I'd glutted myself on the show, I recorded an episode of Pop Culture Happy Hour on which I recommended it to listeners, noting that it was a lot less broad than its premise — and its trailer — would suggest. I talked about its devotion to the familiar trappings of serialized long-form true crime narrative, and how that devotion — and the relative absence of clearly defined, This Is Spinal Tap-esque "gags," meant it didn't feel anything like what we've come to call a mockumentary.

I've since heard from several people who wondered just exactly what it was that I was smoking. How could I not see how hilarious it is? How brilliantly funny? How sharp its satire?

To them I say: It doesn't feel like satire, to me. It doesn't possess the kind of ruthless, lacerating, elbow-in-the-ribs sensibility that define the satiric impulse. Its humor isn't arch or crisp or brittle. And what it does to shows like Making a Murder isn't anything so simple as lampoon them — it reveres them.

Consider the sequence, in episode 2, in which a possible dockside tryst is recreated like it's CSI: Camp Miniwanka: Sight lines! Witness statements! A CGI mini wanka!

Or the scene in episode 5 that meticulously traces the movement of a can of red spray paint through a high school party, using images from camera phones and social media feeds.

I could have laughed at the absurdity of it all. Probably should have. Instead, I leaned closer to the television, frowning, attempting to piece together the narrative, weighing theories, evaluating suspects.

That's what American Vandal's producers know very well: How thoroughly we've internalized the way that true crime series are presented. The techniques they use with such reverence and restraint have become the way we do True Crime now: a messy life-event gets a narrative structure imposed over it which starts doling out the revelations slowly, steering us down dead-ends, doubling back to review, and re-review, and re-re-review, some piece of evidence whose inviolate truth we've taken for granted. It's the steady, implacable rhythm of this kind of storytelling that works on us.

Turns out? It doesn't matter if that infrastructure's built around the grisly extinguishing of a human life or a defaced Prius.

Of course, none of it would work if we didn't care about that central mystery, and the reason we do care is how meticulously they've built the high school setting. Imagine 10 Things I Hate About You directed by Errol Morris: beneath all the camera moves and moody music, the students and faculty seem familiar, believable, and rigorously real.

It can't be overstated how much of this is down to the performances. Playing "real people" of the kind we're used to seeing on reality television — or in true crime documentaries — is one of the toughest acting challenges there is. To work, it's got to vibrate at a different frequency than the one we're used to seeing; it's got to be stripped of the thin layer of artificiality we unthinkingly accept in scripted work. When you aim a camera at non-actors, the result is ... messy. Their self-consciousness colors how they hold themselves, how they talk. In American Vandal, actors who've been trained to dispense with self-consciousness have to remember what it feels like, and reintroduce it to their every move.

So we grow to care for these high school kids. We get drawn into their conflicts and secrets, we worry over their fates. Dylan's fate, in particular.

I went into American Vandal's premiere expecting to laugh; I didn't, much. But by the time I got to the sneaks-up-on-you-poignant closing scene of its finale, I was moved.