Accessibility links
Why The GOP Tax Plan May Not Generate A $4,000 'Raise' For American Families The White House's estimate of gains for the average American family rests on a lot of assumptions and is disputed by economists on the right and left alike. 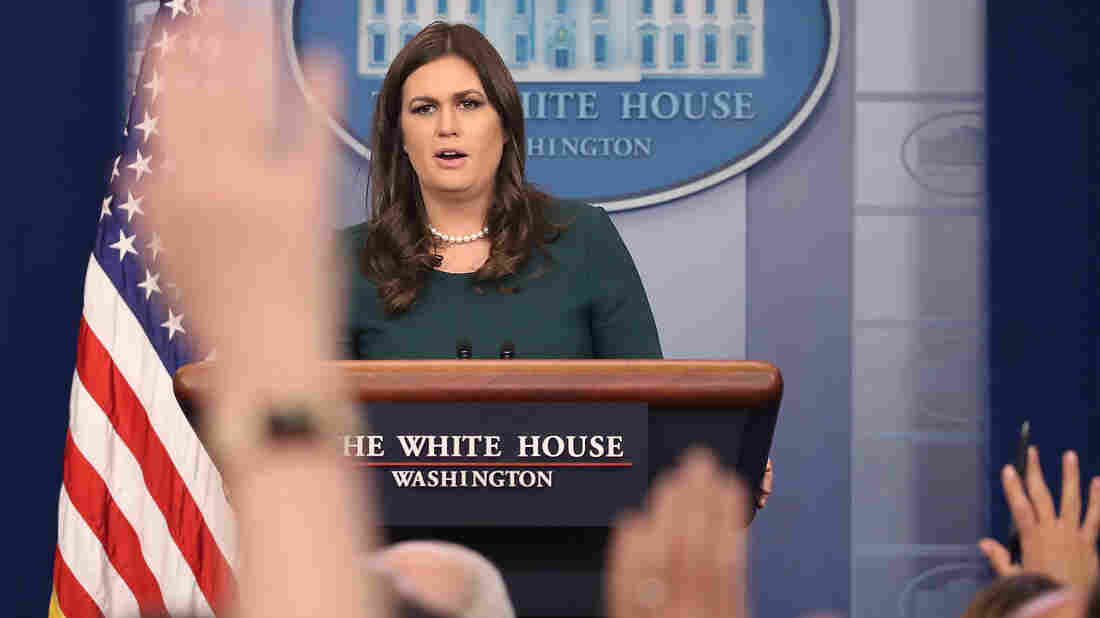 White House press secretary Sarah Huckabee Sanders has helped pitch the idea that the Republican tax overhaul plan would generate a "raise" for the average American family, though that is disputed. Mark Wilson/Getty Images hide caption 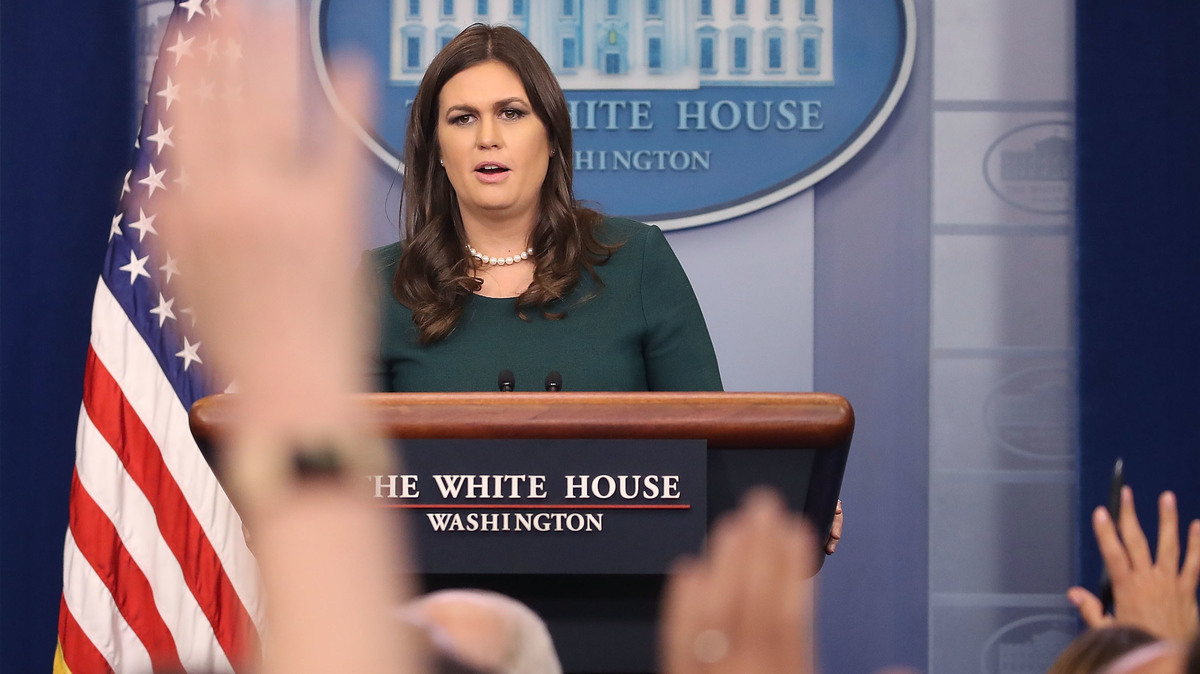 White House press secretary Sarah Huckabee Sanders has helped pitch the idea that the Republican tax overhaul plan would generate a "raise" for the average American family, though that is disputed.

This week, Sarah Huckabee Sanders promoted one of the White House's chief selling points about the Republican tax plan. The pitch: American households will get an additional $4,000 as a result of the tax overhaul proposed in September.

What would your family do w/ a $4,000 raise from the President’s tax cut plan? REPLY & I’ll share your family’s story in the press briefing

The number comes from an estimate produced by the Council of Economic Advisers earlier this month.

And while it's impossible to do a flat-out true-or-false fact check on an estimate, this figure is likely to be repeated as the White House pushes tax overhaul, and there is reason to doubt that your household will get $4,000 — or even anything close to it.

What the White House claims

To be clear, this isn't the White House claiming that the average household would get a $4,000 tax cut as a result of the tax plan altogether. Indeed, depending on a variety of things that are still not laid out — how brackets are shifted around, which deductions will be eliminated, a change in the standard deduction — a new tax package could affect different people in wildly different ways.

Rather, the White House is claiming that one part of the tax plan — the proposed corporate tax cut, from 35 to 20 percent — would trickle down to workers, as businesses bumped wages as a result of having smaller tax bills and also deciding to bring profits into the U.S. from overseas.

The Council of Economic Advisers made this argument in a recent, controversial report posted on the White House website.

In fact, that paper claims $4,000 is on the low end of its estimates. On the upper end, the average household could expect to get $9,000 back. The White House's method of getting to these numbers was simple — the CEA looked at estimates of how much corporate tax rates affect workers' wages, chose two estimates (one low and one high), and applied those to a 15-point corporate tax cut.

Plugging in those numbers, along with average household income (around $83,000 in 2016), the White House found that the tax cut would boost that average household's income by around $4,000 to $9,000. But some economists say that math rests upon a shaky foundation.

Already, with the word "average," there's reason for a taxpayer to doubt that she would receive $4,000 from this change in tax policy. After all, extremes make averages — the CEA report, for example, estimated the median household could get $3,000.

But the debate over this $4,000 figure goes much deeper than that. Well-regarded top economists — including some from the left (former President Barack Obama's Treasury Secretary Larry Summers and his CEA Chairman Jason Furman) and right (Harvard economist Greg Mankiw) soon piled on with their respective critiques and defenses of the CEA's report.

One big sticking point in this debate is those figures that the CEA used in its math to get the $4,000 to $9,000 range. Economist Mihir Desai, whose work informed that math, tweeted that the CEA report "misinterprets" his results and therefore came up with estimates that are unrealistic.

The CEA paper has also sparked fierce arguments over what share of the corporate tax burden workers bear. For one thing, the White House paper cited a variety of estimates for this, but it left out some that show labor's burden to be relatively small. For example, it cited a 2006 Congressional Budget Office report that said workers shoulder 70 percent of the corporate tax burden, but it did not cite a 2012 CBO report that said the figure was 25 percent.

Another paper the CEA did not cite was a report from the Obama-era Treasury Department that said workers end up paying 18 percent of corporate taxes. As the Wall Street Journal's Richard Rubin reported in September, that paper recently disappeared from the Treasury website (however, another document saying that labor bears only 19 percent of the corporate tax burden still lives on the Treasury's site).

And a September Congressional Research Service report criticized several of the papers that the CEA cites to support its conclusions (including Desai's).

All of which is to say that there are many reasons for American taxpayers not to expect $4,000 from this tax overhaul package (and that's if it passes). Yes, it's reasonable to imagine that a big cut in corporate taxes could lead to some sort of bump in wages. But the economics of exactly how corporate tax rates affect workers simply isn't settled, to put it mildly.

"No, it's not. It's way too high," said Joe Rosenberg, senior research associate at the Tax Policy Center, a D.C. tax policy think tank that has been critical of the Trump tax plan.

Even some on the right believe the White House is overshooting with its estimate.

"This estimate is considerably higher than I would expect," wrote Michael Strain, director of economic policy studies at the right-leaning American Enterprise Institute, for Bloomberg this week.

"We don't know the exact magnitude. Is it going to be $400 or $500, or is it going to be $4,000 to $9,000?" is how Aparna Mathur, resident scholar in economic studies at AEI, put it. She has co-authored papers with CEA Chairman Kevin Hassett about the relationship between corporate taxes and wages. She adds, "It does sound pretty high."

Mathur says the CEA's math was done correctly but that there is a problem in believing that math would work perfectly in the real world.

"The way I read it is, yeah, it takes an estimate from the literature, it applies the numbers directly and says it's likely you could get a $4,000 wage increase, but it has to be conditioned on everything else going so smoothly," she says.

For its part, the White House defends its estimates.

"The analysis that produced this estimate follows the standards of the economics profession," a spokesperson wrote in an email. "CEA remains happy to debate any methodological assumption, which some of the criticisms of the CEA study — including some that have been prominently covered in the media — have not done."

One problem with the estimates, in Mathur's mind, is that a corporate tax cut wouldn't happen in a vacuum. Rather, it would come alongside other potential effects from the tax plan — a big deficit hike, for example. Congress just cleared the way for a new tax plan to add $1.5 trillion to the deficit.

"You're not going to allow fiscal deficits to continue indefinitely," she says. "So then projecting these scenarios of $4,000, that starts sounding implausible."

Lawmakers might, for example, decide to raise taxes again in the future to try to close a fiscal hole. Or it's possible that a growing debt could eventually cause interest rates to rise, slowing the economy.

Criticisms from the left, meanwhile, have taken aim not so much at the deficit-ballooning aspect of the tax plan as at the trickle-down economics behind it. Economist Stephanie Kelton, who advised the 2016 Bernie Sanders campaign, pointed out that "sending a $4,000 check to every household in America raises average household incomes by $4,000."

Jacob Leibenluft, who worked for the Obama administration and currently is a senior adviser at the Center on Budget and Policy Priorities, likewise criticized the White House for trying to sell the benefits of a corporate tax cut to the middle class, instead of plotting out a middle-class tax cut.

It's possible that that plan will cut the middle class's tax burden. In a recent estimate of the tax plan's effects, the Tax Policy Center found that it would help the middle class (but help higher earners far, far more).

However, the tax plan as presented thus far has many holes in it — for example, it didn't specify what the income cutoff points would be for the new tax brackets. In addition, it left some promises of middle-class tax relief ("additional measures to meaningfully reduce the tax burden on the middle-class") decidedly fuzzy.

"It was strange to hear them to come out with such a specific estimate of what it would do to people's wages after saying it was completely implausible to think anybody could know anything about the effects of their plan," he says.