Accessibility links
Ahead of Trump's Tax Mission To Capitol Hill, Feud With Corker Explodes Lawmakers are eager to see the president embrace upcoming tax legislation. But ahead of a lunch meeting, the Tennessee Republican said Trump is responsible for a "debasement of our nation." 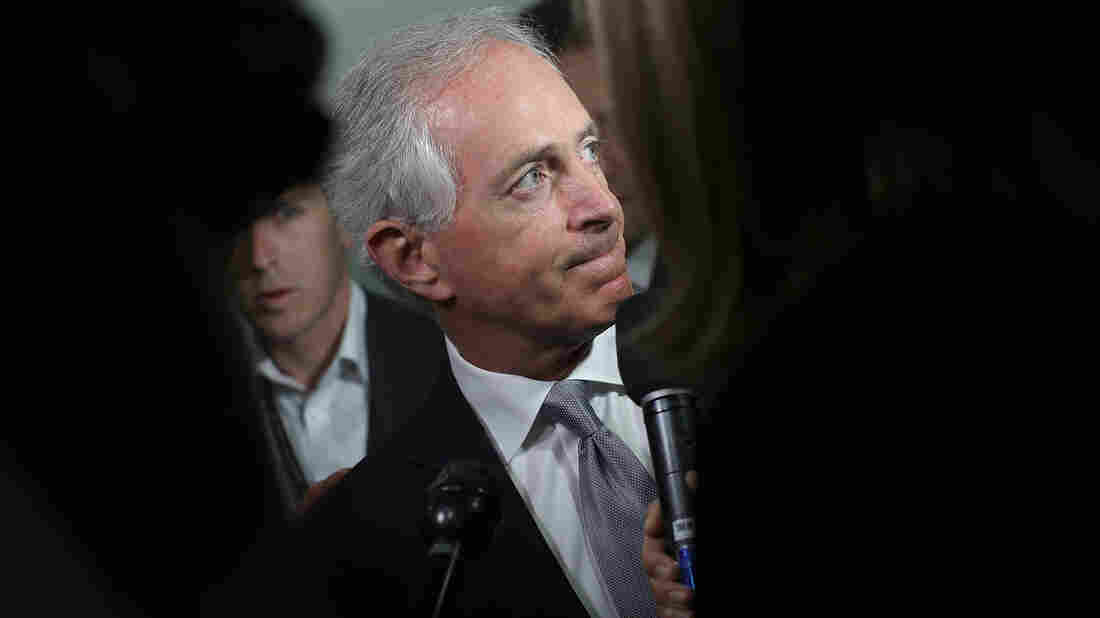 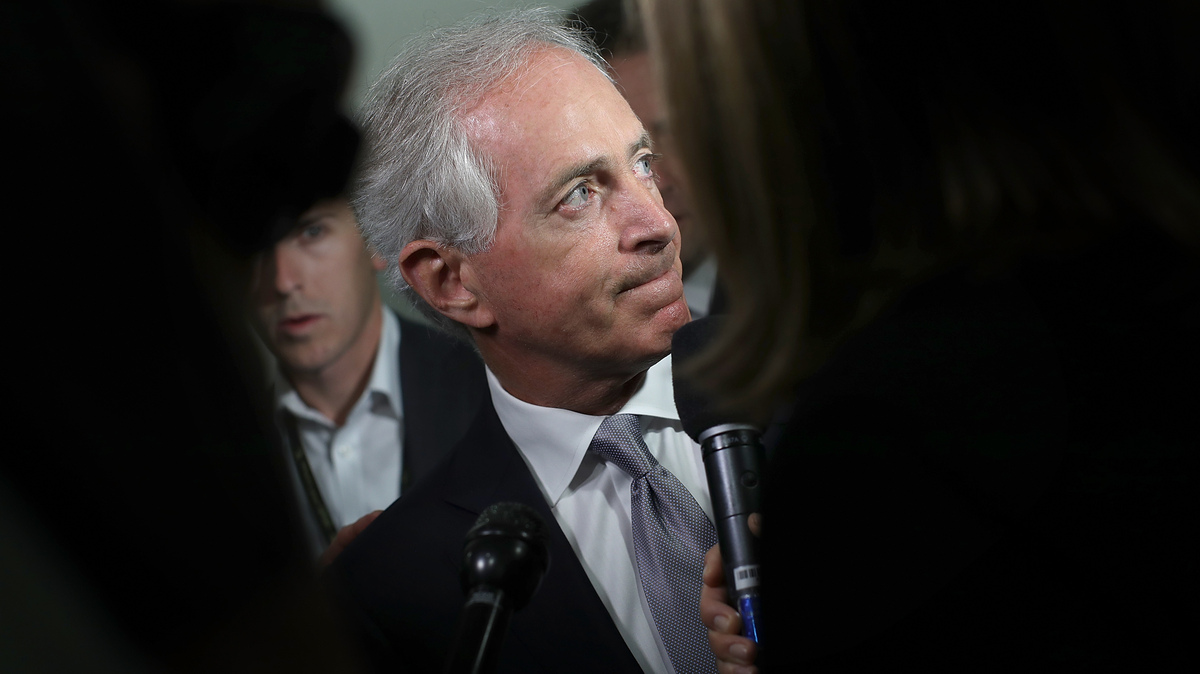 Sen. Bob Corker, R-Tenn., speaks to reporters on Capitol Hill about President Trump on Tuesday morning, ahead of Trump's visit with GOP senators.

Marching down Pennsylvania Avenue to send a message to Congress is a classic move in presidential political theater, and Tuesday is President Trump's inaugural performance. Trump makes his first visit to Capitol Hill to meet with Senate Republicans at their weekly meeting and the message is clear: Pass a tax cut.

On this issue — more than any other currently facing the GOP — the party is overwhelmingly unified. Lawmakers are eager to see the president embrace their upcoming tax legislation and to help the party make the case to the public for a plan that aims to cut taxes for American businesses and most individual taxpayers.

After that, it could get awkward.

The morning kicked off with another confrontation between the president and Senate Foreign Relations Chairman Bob Corker of Tennessee that resulted in the senator expressing regret for supporting Trump for president last year.

After Controversy Over Condolence Calls, Can Trump And The White House Refocus?

Appearing on NBC's Today, Corker dismissed Tuesday's visit as nothing more than a "photo op" and said the president could be most helpful on tax legislation by tweeting less and letting Congress work through the process.

Corker referenced a recent presidential tweet ruling out any changes to the way tax-deferred income can be contributed to 401(k) retirement plans. Taxing retirement savings isn't a particularly popular idea on Capitol Hill — and it's unclear whether it was ever in the bill — but Republicans fear the president's habit of tweeting policy positions at random could make it harder to pass a tax cut on a tight timeline.

Corker also reiterated previous criticism of Trump's leadership, suggesting that the president has "kneecapped" diplomatic efforts led by Secretary of State Rex Tillerson and that there are "people around [Trump] that work in an effort to contain him" including Tillerson, Defense Secretary Jim Mattis and chief of staff John Kelly.

In response, the president fired off a few tweets attacking Corker's record on Iran and taxes and suggesting the senator "couldn't get elected dog catcher in Tennessee."

...Corker dropped out of the race in Tennesse when I refused to endorse him, and now is only negative on anything Trump. Look at his record!

The tit for tat went on with Trump tweeting and Corker speaking further.

Corker gave CNN an interview on Capitol Hill in which he suggested Trump's presidency is not salvageable and regrets ever supporting him as a candidate. "Let me put it this way: I would not do that again," Corker said regarding his 2016 endorsement.

Trump's tweets continued after that.

Sen. Corker is the incompetent head of the Foreign Relations Committee, & look how poorly the U.S. has done. He doesn't have a clue as.....

...the entire World WAS laughing and taking advantage of us. People like liddle' Bob Corker have set the U.S. way back. Now we move forward!

Asked whether he was still planning to attend Tuesday's Senate GOP lunch with Trump, Corker responded: "Oh, definitely. It's my lunch."

It's a fresh reminder that Trump's Senate visit comes while he has been at odds on both policy and politics with an unusually high number of members of his own party.

Corker and John McCain of Arizona have been vocal critics of Trump's leadership skills. Corker, who is retiring, is also a key vote on tax legislation. He has vowed to oppose any bill he believes will add to the deficit. The United States' debt topped $20 trillion for the first time ever in September, and Corker has said he views the debt as the most significant threat to national security.

Republicans like McCain and Sen. Lindsey Graham, R-S.C., are eager for more information from the Trump administration on a recent military operation in Niger that killed four soldiers. McCain has suggested the Armed Services Committee will conduct oversight hearings to figure out what went wrong.

Sen. Lamar Alexander, R-Tenn., is trying to get the president on board for his bipartisan health care plan to bolster the individual insurance market. The bill, co-authored with Sen. Patty Murray, D-Wash., potentially has the support in the Senate to overcome a filibuster, but it doesn't stand a chance unless Trump gets on board. Senate Majority Leader Mitch McConnell, R-Ky., has said he will not bring it up for a vote unless the president is guaranteed to sign it. Alexander has warned that inaction could cost premiums to spike further.

Politically, there is also ongoing tension between Trump and senators up for re-election in 2018. The president is picking and choosing which senators he will support, breaking with political norms of backing incumbents. His former chief political strategist, Steve Bannon, is also threatening to recruit and fund primary challengers to senators who don't support the president's agenda. Trump has declined to endorse GOP Sen. Jeff Flake of Arizona, another Trump critic, but he has offered assurances to GOP Sens. Roger Wicker of Mississippi and Deb Fischer of Nebraska that he supports their re-election bids. 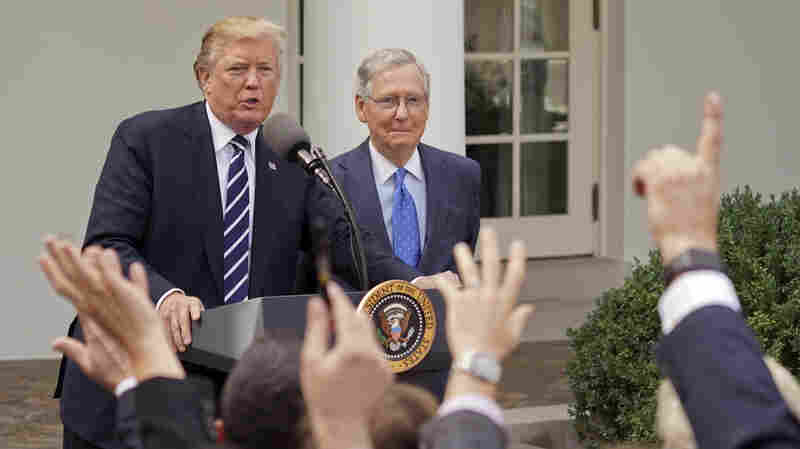 President Trump and Senate Majority Leader Mitch McConnell of Kentucky tried to tamp down rumors of a rift between them last week in a Rose Garden press conference at the White House. Pablo Martinez Monsivais/AP hide caption 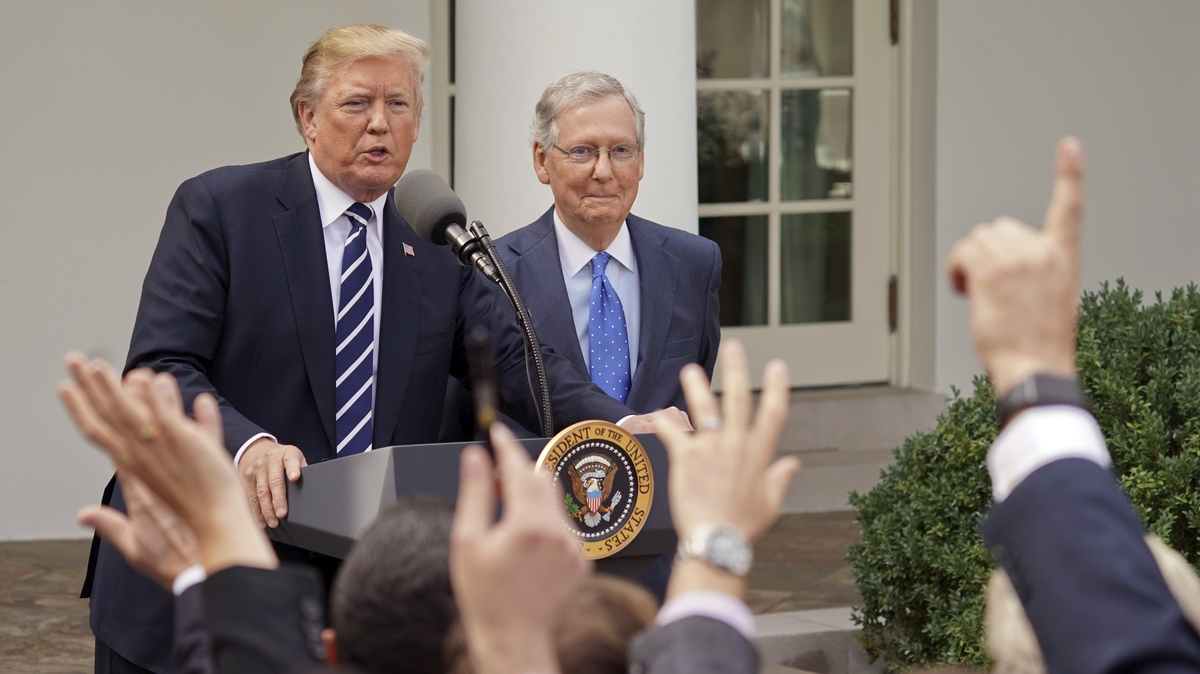 President Trump and Senate Majority Leader Mitch McConnell of Kentucky tried to tamp down rumors of a rift between them last week in a Rose Garden press conference at the White House.

McConnell has defended his members and pushed back on efforts to oust incumbents, noting that many insurgent primary candidates cost Republicans Senate victories in 2010 and 2012.

Trump has been a frequent critic of McConnell as well and has increasingly called on McConnell to blow up the Senate rules and eliminate the legislative filibuster to make it easier to get legislation passed. McConnell does not support that move, and he does not have the votes to do it.

The two met privately at the White House last week. Afterward, together they tamped down on talk of a rift. "I think what the president and I would both like to say to you today, contrary to what some of you may have reported, we are together totally on this agenda to move America forward," McConnell said.

The most important item on that agenda is enacting tax cuts by the end of the year. Following the party's failure to make good on its promises to dismantle the Affordable Care Act, Republicans fear a similar failure on tax cuts will endanger their congressional majorities in the 2018 midterm elections.

In other words: There's plenty to discuss over lunch.