Accessibility links
When Robert Guillaume Played Aaron Sorkin's First Unforgettable Leader Robert Guillaume, who died Tuesday at 89, played a great many roles on television and onstage. His work on the short-lived series Sports Night was one that led the way for other great characters. 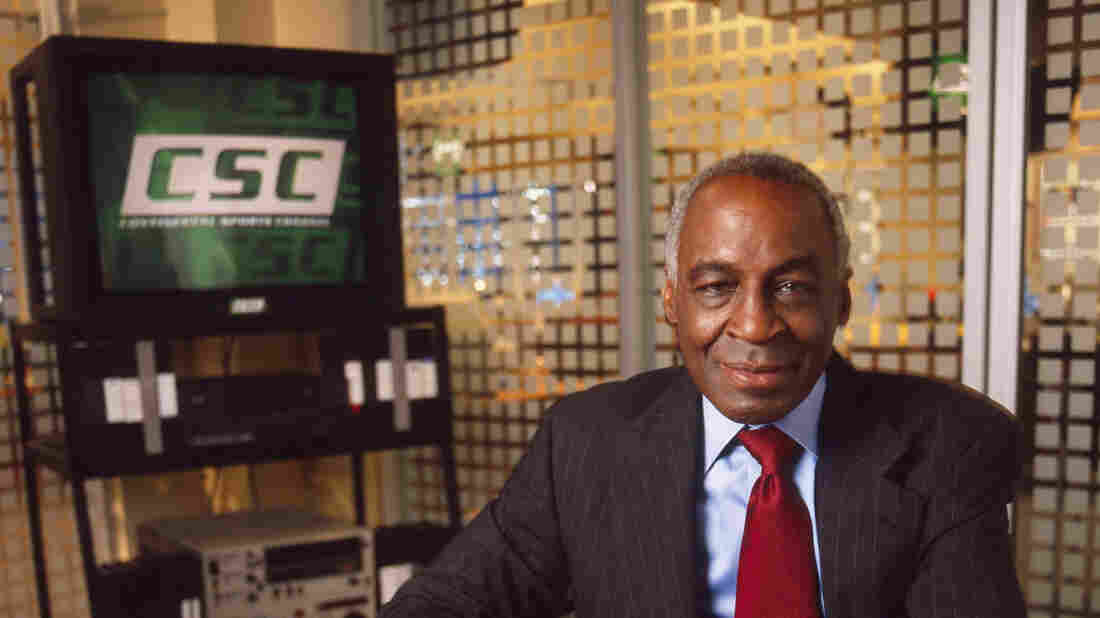 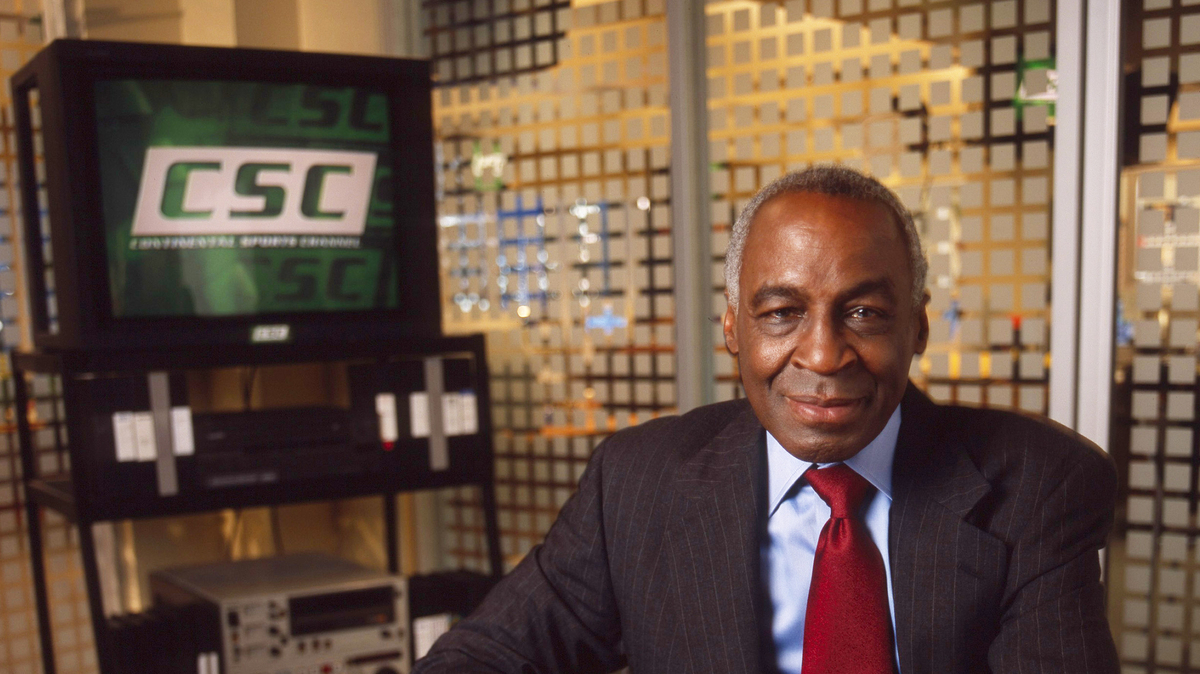 Robert Guillaume, who died Tuesday morning at 89, became familiar on TV largely via Soap and Benson. On both, he played Benson DuBois, who was the butler on Soap but rose on Benson from head of household affairs for a governor to his own political career as lieutenant governor. Guillaume won an Emmy for playing Benson back in 1979 when he was still on Soap and then an Emmy for outstanding lead actor in a comedy series in 1985 — the last black actor to win in the category before Donald Glover for Atlanta earlier this year. Guillaume also voiced Rafiki in The Lion King and appeared onstage in Porgy and Bess, The Phantom Of The Opera and Guys and Dolls (for which he was nominated for a Tony Award).

And from 1998 to 2000, he played Isaac Jaffe on ABC's Sports Night — Aaron Sorkin's first TV show. The one he launched a year before The West Wing. In some ways, Sports Night was a lighter, more grounded West Wing, and Isaac Jaffe was its Jed Bartlet.

Set behind the scenes at a sports news show indistinguishable from ESPN's SportsCenter, Sports Night featured two anchors, Dan and Casey (Josh Charles and Peter Krause), executive producer Dana (Felicity Huffman), producers Natalie and Jeremy (Sabrina Lloyd and Joshua Malina), and Isaac at the helm. Where much of Sorkin's other work has addressed itself to the patently lofty matters of politics and (in the case of The Newsroom) news about politics, Sports Night was about sports and the telling of sports stories. Its heft came from the seriousness with which its characters went about trying, in their own ways, to speak the truth with integrity, whether they were covering domestic violence committed by a football player or an impending trade.

It takes a lot to convince an audience that the business of covering sports matters; that it is different, in important ways, when done well than done badly. What Guillaume provided was unwavering, straight-talking decency — but decency without sanctimony. Decency made manifest through work, sometimes delivered with sharp flashes of humor and sometimes with such divinely steely seriousness that the dangers of crossing him seemed immense.

In the show's second episode, "The Apology," we learn that Dan said during an Esquire interview that he believes in a medical rather than criminal justice approach to drug addiction. The network the fictional show aired on, called CSC, reads this — in 1998 — as condoning drug use, and Dan is dragged into a meeting in Isaac's office with the brass. "Our sponsors expect us to project an image of good health and clean living," one suit says to him. "I'll think about that the next time I'm reporting on how the Miller Genuine Draft car did in the Winston Cup," Dan snaps back. Rather than let this drag on, Isaac cuts to the chase: "How do we fix this?" Dan is told that he should apologize. He pushes back. Eventually, Isaac tells him to just do it. Not because he should, but because "this is television, and this is how it's done." Dan, who is firmly right on this issue in the show's telling, mutters to Isaac, "Yeah, well, sitting in the back of the bus was how it was done till a 42-year-old lady moved upfront. I'm not very impressed with how things are done, Isaac." Isaac calmly tells Dan to do it anyway, and the suits leave.

"Danny?" Isaac says. "You know I love you, don't you?" Dan says yes. "And because I love you, I can say this: No rich young white guy has ever gotten anywhere with me comparing himself to Rosa Parks." There is a pause. "Got it?" Dan looks mortified, and he mutters, "Yes, sir."

This was the beautiful way that Isaac was written, not just on issues that involved race, but in general. He supported Dan in the meeting, because you support your people, but he could still tell Dan this was not the hill to die on, and he could deliver unto Dan a well-deserved dressing-down about the absurdity of comparing his situation, however right he might be on the merits of it, to that of Rosa Parks. What's critical if you're going to write good-hearted characters like Dan usually is, who say wonderful things as Dan usually did, is to allow even their impassioned speeches to be punctured. Even their moments of moral surety have to be subject to question, or they cease to be compelling. It was through Guillaume's complex and uncompromising performance that Sorkin was able — perhaps better than in any other project — to deflate his own heroes effectively. And, in fact, to question their heroism.

Guillaume moved through this role with such authority, but also with such love and humor toward the people who worked for him. He had some of the best line readings in the show's two seasons: One of my favorites is in "Intellectual Property," in which Dan is fined for having sung "Happy Birthday" to Casey on the air. He resolves to only sing public domain songs for people's birthdays in the future, and he stops Isaac to tell him what happened. The rights to the song belong, Dan reveals, to the estate of Mildred and Patty Hill. "It took two people to write that song?" Isaac asks. It's such a short line, sort of funny on the page, but it's sold by the depth of his disbelief — not only that "Happy Birthday" is copyrighted, but that Dan is talking to him about it — and that's all Guillaume.

Guillaume did not play a full-time sage giver of advice, though; Isaac had his own stories, his own fears and foibles and, in fact, his own moments of moral crisis. As the show progressed, it was more and more about the responsibilities of a captain of a ship as the ship takes on more and more people who own it and may sink it. When to fight and when to bend, and how to be strong for your team when you cannot do everything for them that you wish you could — these are fundamental stories, not only about media and work but about leadership and, indeed, parenting. And in the episode "The Six Southern Gentlemen Of Tennessee Tech," Isaac delivered a blistering critique of the flying of the Confederate flag over college football games nearly two decades before a lot of real sportscasters paid much attention to it.

Isaac's story took a turn part of the way through the first season when Guillaume had a stroke and was out of work for a while — so Isaac had a stroke also. He returned in the last moments of the last episode of the season. Dan and Casey, his loving surrogate sons, came over and welcomed him back in the only way they knew how: they teased him. He'd been out too long. A stroke? Pfft. And out for six weeks? He was a "cheese Danish." A "crumb cake." Isaac grinned. "Let me look at you both." He paused. He really looked at them. "You look good, boys," he finally said. "So do you, sir," Dan told him, and hugs were exchanged.

Sorkin is rightly lauded for his ability to imbue patriarchs with great wisdom that rumbles from their bellies. But his work with Guillaume on Sports Night was more earthbound, more emotionally tactile. Isaac's wisdom was generally delivered without the swelling music or the podiums or the flags that accompany presidents, and without the life-or-death consequences of covering wars. His was the wisdom of real bosses and real parents, leaning through doorways to give advice, and doing their best when they sometimes cannot protect you. Jed Bartlet was president, larger than life, able to send bombers. Isaac Jaffe was fighting budget cuts and rumormongering a good part of the time; not saving the world, but trying to build good people, develop their talent, and make a good show. It's impossible to imagine anyone but Guillaume giving the character such mischief and temper and — we cannot avoid the word indefinitely — gravitas, or making him so unforgettable.

An earlier version of this piece identified Benson as the butler to the governor of California. In fact, the state was never specified.