Accessibility links
'Adèle Bedeau' Is A Delightfully Macabre Mix Of Text And Subtext Graeme Macrae Burnet's stylish, atmospheric mystery can be read just as a dark little detective story — but it's worth paying attention to the novel's playful found-manuscript framing device.

'Adèle Bedeau' Is A Delightfully Macabre Mix Of Text And Subtext

'Adèle Bedeau' Is A Delightfully Macabre Mix Of Text And Subtext 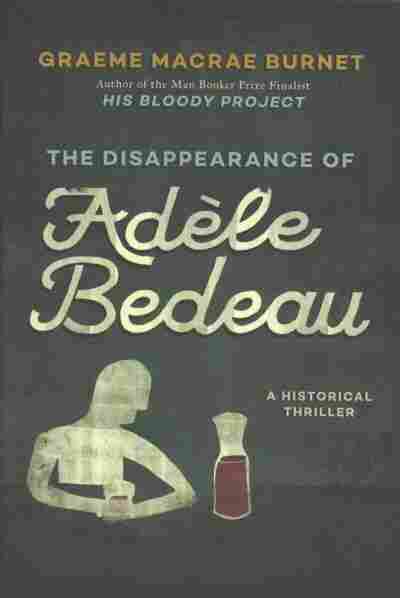 The Disappearance of Adele Bedeau

If you're looking for a stylish, atmospheric mystery with a startling twist, look no further: The Disappearance of Adèle Bedeau by Graeme Macrae Burnet will be your cup of strong Continental coffee. Set in a very sleepy Alsatian town on the Gallic side of the Rhine, this novel titillates with its homage to Georges Simenon, that master of French suspense who never met a detail he didn't like.

Manfred Baumann is a loner of decided tastes and a precise routine. Despite his lack of a university degree, he's become the director of a local bank with the help of his cold, well-connected grand-père, M. Paliard. Manfred, ever-downtrodden due to his Swiss father's name and humble café roots, continues to take his lunch daily in that café, the Restaurant de la Cloche, and prides himself on having been invited to stand as a fourth in a regular bridge game.

But on one of his regular weekdays (with its regular menu of French onion soup, pot au feu, and crème brulée), he idly — and somewhat crudely — eyes the only waitress, Adèle: "She was a dark, heavy-set girl with a wide behind and large, weighty breasts." When she reappears that night as he's playing cards, she's ready for an evening out: "... [she] had changed into black tights and high heels, and was now wearing a denim jacket over a tight black top. She had applied mascara and lipstick." That minx! Manfred follows her, sees her meet an unknown man — and the next day, the stalwart Adèle does not show up for work. Has she met with foul play?

... this novel titillates with its homage to Georges Simenon, that master of French suspense who never met a detail he didn't like.

What unspools from this point resembles a classic provincial cozy. Manfred decides to find out what happened to Adèle, in the process showing us the "nondescript" city of Saint-Louis, where the brighter young people "leave for college, most likely never to return." When Manfred himself fails to earn his baccalauréat, his powerful grandfather arranges his future, but it turns out fairly well. He has a secretary, a daily routine, a tidy apartment. The only thing he lacks is a romantic partner, and in the course of his inquiries into Adèle's whereabouts, he meets a lovely woman named Alice. Manfred will solve the mystery and get the girl!

Not so fast, dear reader. Macrae Burnet has a trick or three up his manche. We should probably delve into his biography a bit; The Disappearance of Adèle Bedeau is actually the first of his three published novels, released in 2013, and we're reading it now in the U.S. because his second, His Bloody Project, was a huge success and a finalist for the Man Booker Prize. Subtitled "Documents in the case relating to Roderick Macrae," is supposedly an 1869 memoir written by a 17-year-old Scottish tenant farmer awaiting trial for three murders, "discovered" by Graeme Macrae Burnet while he researched his own Highland roots. Thriller, true crime, detective story — it's all there, and it continues the process Macrae Burnet began in Adèle Bedeau.

By which I mean Macrae Burnet presents this French provincial mystery as his translation of a book by one "Raymond Brunet," and even provides a substantial afterword in which he creates a history entire for Brunet and his tiny oeuvre. "In France, the novel has been almost continuously in print since its publication in 1982, and since Claude Chabrol's screen version in 1989, it has achieved the status of a cult classic." We learn Brunet's history, which eerily mimics Manfred Baumann's. We hear about the novel's publishing trail and its succès fou adaptation. It's absolutely worth reading the afterword first, or last, or reading it and then re-reading the entire book again, because Macrae's macabre playfulness improves with each layering of text and subtext.

However, if you'd prefer to simply enjoy a dark little detective story, the author delivers on that as well. There's a twist, but it's not obvious, nor is it manipulative; it builds out of a quiet police inspector's deep intuition and knowledge of where he lives and what kind of people surround him. His careful investigation into Adèle Bedeau's disappearance satisfies like Simenon and surprises like Ruth Rendell. I can't give it any higher praise.