Accessibility links
How Coven Pioneered Occult Rock With 'Witchcraft Destroy Minds & Reaps Souls' The album — released, perhaps, ahead of its time — fused occult themes with rock music. Often described as a cult record, its influence has spread too far and too deep to be so easily cornered off. 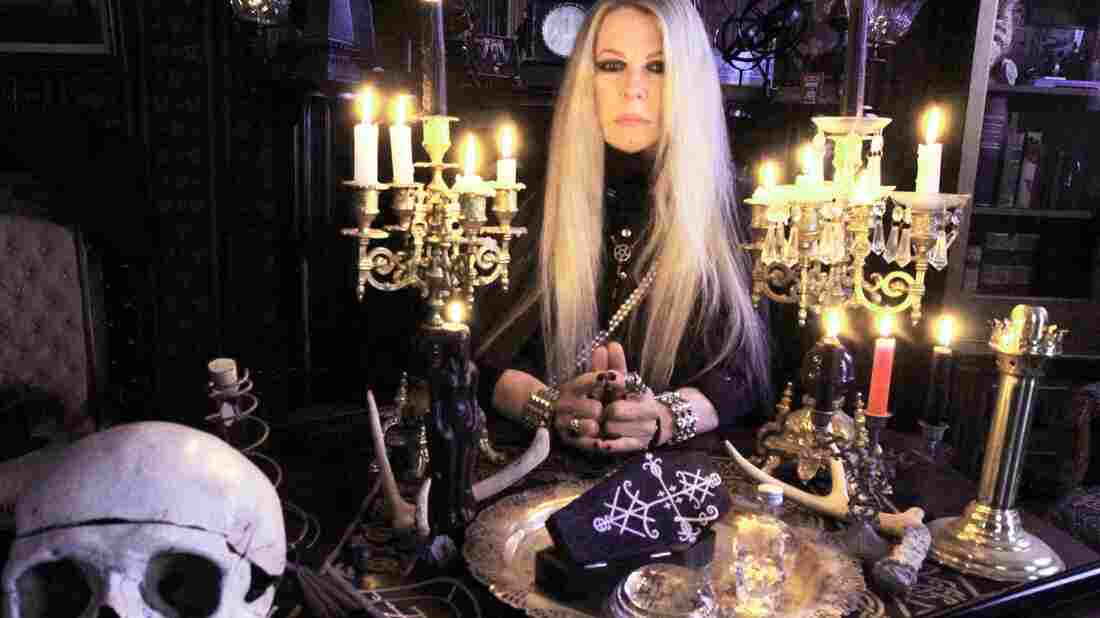 Coven, led by singer Jinx Dawson, released Witchcraft Destroys Minds & Reaps Souls in 1969, and its influence is still being felt today — especially in the new wave of occult rock and metal bands. gregthemayor /Courtesy of the artist hide caption 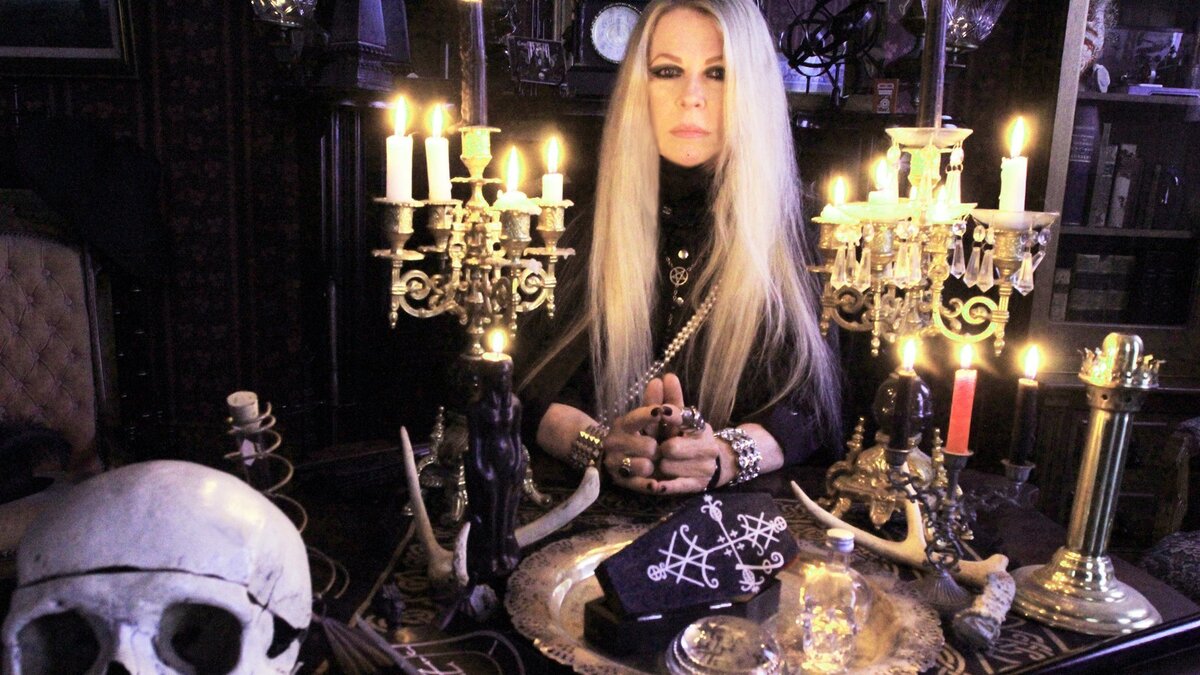 Coven, led by singer Jinx Dawson, released Witchcraft Destroys Minds & Reaps Souls in 1969, and its influence is still being felt today — especially in the new wave of occult rock and metal bands.

gregthemayor /Courtesy of the artist

During a 1986 interview between MTV VJ Martha Quinn and Black Sabbath's Tony Iommi, the television personality caught the legendary guitarist off guard. "Speaking of the early days of Black Sabbath, I found — I swear — the wildest thing," she says. As he looks on apprehensively, Quinn pulls something out from behind her chair: a copy of Coven's 1969 debut album, Witchcraft Destroys Minds & Reaps Souls.

"Have you ever seen this record before? Coven?"

Quinn turns the album around to show that a member of the band is credited as Oz Osbourne and its opening track is titled "Black Sabbath." Conveniently cropped out of the frame is the album's gatefold art that featured a naked, skull-adorned woman splayed across a ritualistic altar. Iommi continues to deny knowledge of the band, laughing uncomfortably, "1969? We were there first."

Not to discount the metal icons or any of the mind-blowing contributions they've made to the last half-century of music, but let's give credit where credit's due: The distinction of being "the first" band to fuse occult and Satanic themes with rock music belongs to Coven. And while it's possible that Iommi wasn't aware of Coven during Sabbath's earliest days, it certainly wasn't the first time he'd heard its name; the two bands reportedly played a show together in 1970 and at the time had affiliated record labels — Vertigo/Fontana and Mercury, respectively. Writing for Rolling Stone that same year, Lester Bangs even dubbed Sabbath, "England's answer to Coven."

Formed by then-teenaged vocalist Jinx Dawson, bassist Greg "Oz" Osborne and drummer Steve Ross in the mid-1960s, Coven began stunning audiences with its psychedelic, bluesy rock laced. Its lyrics celebrated personal liberation, sex and Satan at a time when such a combination was not just risqué — it was unheard of. These days, Witchcraft is often described as a cult record, but its influence has spread too far and too deep to be so easily cornered off.

Dawson was born in Indiana to a wealthy family that could trace its history back to the Mayflower Compact. Multiple generations of her relatives had been followers of the occult traditions of the Left Hand Path and involved with various secret societies. They passed their knowledge on to Dawson, who has remained committed to those principles throughout her life.

A gifted singer and pianist, Dawson was awarded a scholarship to study opera at age 13, around the same time she developed a taste for rock music. She spent a couple of years playing with a local rock 'n' roll band, where she first met Osbourne and Ross. When the three regrouped as Coven, she had a chance to bring all her interests together.

Performing with artists such as Alice Cooper, MC5 and the Yardbirds, Coven made an impression with its dark grooves and stage elements including a Black Mass and a roadie hanging on a cross that was inverted by the end of the set. During each performance, Dawson raised her fist in the air with forefinger and pinkie extended in a sign of the horns — introducing the music world to a gesture that would come to be as associated with hard rock and metal as black t-shirts and loud guitars. (When Gene Simmons tried to trademark the gesture earlier this year, Dawson threatened to sue on behalf of music fans everywhere, stating "it was meant for all to do, tho it is legally 'grandfathered in' to me for use in music by all the history," and noting the Kiss bassist didn't even do it correctly.)

Coven's considerable talents and jaw-dropping shows captivated Chicago producer Bill Traut, who brought the band to the studio to record Witchcraft, and hired songwriter and musician Jim Donlinger (aka James Vincent) to help fine tune the sonic visions of its debut album. Despite outside contributions, the soul of the album lies with the band's performances, especially Dawson's dynamic vocals that scale complex arrangements with apparent ease and shapeshift between drops of honey and spine-chilling snarls on a dime. While some of the tracks are certainly steeped in the sounds of the era, standouts like the piano-based "The White Witch of Rose Hall" and the album's signature, the scathing, hard-burning rocker "Wicked Woman" seem to grow even darker and more powerful with time. The record closes out with an extended version of a Black Mass. Penned by Traut, it's noted on the album sleeve as the only complete studio recording of its kind and has become part of the record's enduring mystique.

Many albums are released before their time, but Witchcraft also had the misfortune of being released during a period of heightened public anxiety toward anything related to the occult or Satan, due in large part to the shocking Manson Family murders. After a photograph surfaced of Charles Manson holding a copy of Witchcraft outside of a Los Angeles record store, Coven became falsely connected with the cult leader, even though the band had never met Manson in person. Shows were cancelled, albums were returned and the label withdrew support. Following a 1971 one-off single "One Tin Soldier" (recorded by Dawson for the movie Billy Jack), and two less overtly-occult albums, Coven went on hiatus in 1976. But while the band may have drifted into obscurity by mainstream standards, it left an enormous hellfire in its wake.

Over the next two decades, occult and Satanic themes became inextricably linked with hard rock and heavy metal culture. Bands such as Sabbath, Venom, Mercyful Fate and others were both lauded and hated for forging those connections, all while Coven's contributions went overlooked. In a 2017 interview with Decibel's Justin Norton, Dawson said, "The bands that came after us, in the '70s and '80s, never recognized us at all. That was how the business was. You never said where you got things. The music might not have been quite the same but the occult situations were there, as well as the photographs and lyrics."

The truth might not be as simple as sheer business: With all the bravado, hypermasculinity and aggression that became associated with heavy and occult music, is it any wonder that even those in the know would sidestep the fact that a young woman from the Midwest spawned many of the genre's most enduring sources of inspiration, imagery and sexual energy? Or perhaps it was due to the fact that, unlike the many bands who came after them (Sabbath included), Coven's interests in the occult were genuine and steeped in tradition, rather than adopted for pure shock value or fashion. In fact, Dawson has even characterized Witchcraft as a "scholarly work."

Since the early 2000s, a new wave of occult rock and metal bands has emerged — perhaps most famously, Ghost, who took home a Grammy Award for Best Metal Performance in 2016 — and many are forthright in citing Coven as an influence, even paying homage in their sounds, wardrobes and lyrical themes. Notably, woman-fronted occult rock bands such as The Devil's Blood, Jex Thoth, Sabbath Assembly and Blood Ceremony share the some of Dawson's powerful energy and dark sensuality, and are in turn inspiring the next generations of musicians of all genders.

This renewed spirit wasn't lost on Coven; the band briefly reformed in the late 2000s and released a compilation of unreleased material in 2008. In 2013, Coven released Jinx, its first album of new material since 1974's Blood on the Snow. In 2017, Coven officially returned to the stage with a new lineup to play its first-ever headlining date in European date at the esteemed Roadburn Festival in Tilburg, Netherlands. The band has appeared at a number of festivals across Europe and the U.S. throughout this year, with more to come. Though it's been over 45 years since Coven released Witchcraft Destroys Minds & Reaps Souls, its influence continues to permeate music culture — and these days, no one is denying its impact.