Accessibility links
As Trump Proposes Tax Cuts, Kansas Deals With Aftermath Of Experiment In 2012, the Kansas government passed massive tax cuts, which Republican Gov. Sam Brownback promised would deliver "a shot of adrenaline" to the economy. But the experiment did the exact opposite. 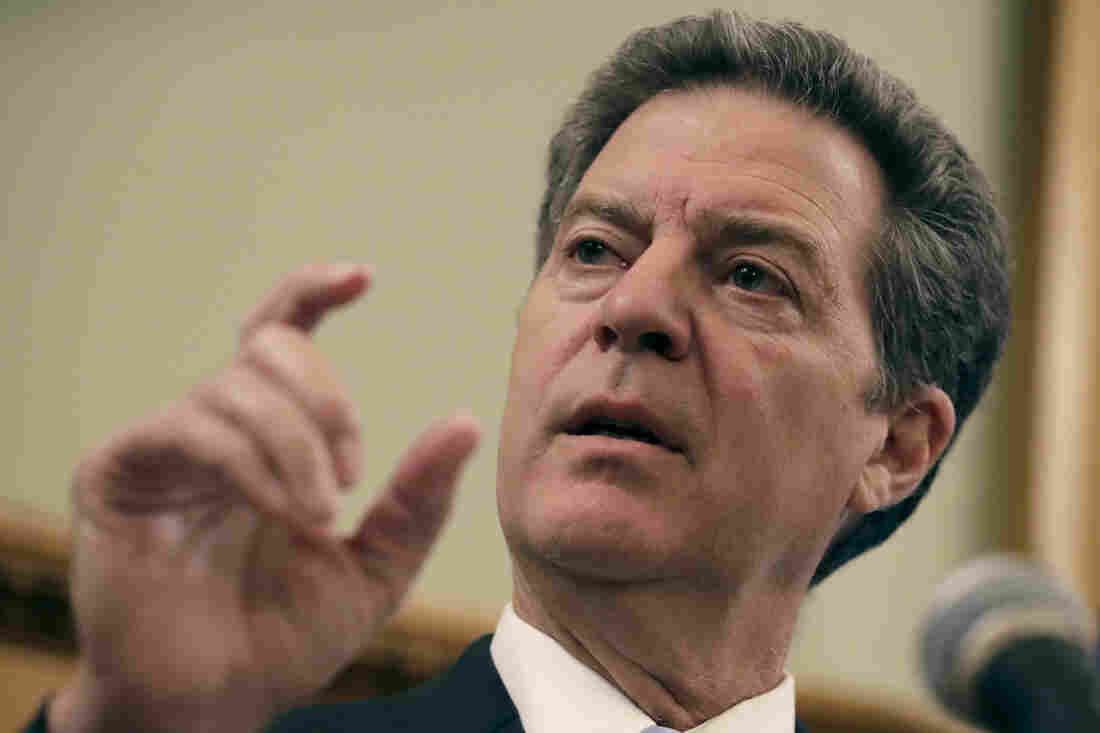 In 2012, Republican Gov. Sam Brownback of Kansas pushed reforms through the Legislature that included across-the-board income tax reductions. But rather than boosting the economy, the cuts caused revenues to plummet. Lawmakers now seek to close a $900 million budget gap over the next two years. Charlie Riedel/AP hide caption In 2012, Republican Gov. Sam Brownback of Kansas pushed reforms through the Legislature that included across-the-board income tax reductions. But rather than boosting the economy, the cuts caused revenues to plummet. Lawmakers now seek to close a $900 million budget gap over the next two years.

Kansas Gov. Sam Brownback is notorious for what is known as the Kansas experiment, a bold effort to assert the power of limited government.

In 2012, the Republican governor pushed reforms through the state Legislature that dramatically cut income taxes across the board. Brownback boasted the plan would deliver a "shot of adrenaline" to the Kansas economy.

But the opposite happened.

Revenues shrank, and the economy grew more slowly than in neighboring states and the country as a whole. Kansas' bond rating plummeted, and the state cut funding to education and infrastructure.

Last year, the Republican-controlled state Legislature voted to roll back the tax cuts, but Kansas is still dealing with the aftermath of this bold experiment. State lawmakers are now seeking to close a $900 million budget gap over the next two years.

Burdett Loomis, a political scientist at the University of Kansas, says the experiment was as much a political play as it was about governing.

"My personal thought here is that Brownback came back to Kansas from the [U.S.] Senate to demonstrate that Kansas could be this small government heaven on Earth, that would help him honestly run for president in 2012," Loomis says.

When Brownback was elected in 2010, Kansas, like many other states, was still struggling to rebound after the Great Recession.

"Well, Kansas for years had been thought of as being somewhat behind other states in the region in terms of growth," says Kenneth Kriz, a professor of public finance at Wichita State University. "There was a push starting really with the first years of the Brownback administration to do something with tax policy to help turn the tide and to make Kansas more attractive as a place to live and do business."

Brownback promised the tax cuts would lead to an extra 22,000 jobs over the next five years. It also reduced the number of tax brackets for individual income from three to two.

A key part of the plan slashed to zero the tax rate pass-through businesses pay. Small businesses — such as sole proprietorships, partnerships and S corporations — pay taxes through the individual income tax code, not the corporate one. Under the Kansas plan, the pass-through tax rate was reduced from 7 percent to zero.

"There were a lot of really big companies that were actually [limited liability] like big law firms in this state, oil exploration companies then," he says.

Others supposedly lied on their tax forms.

"Most famously, a couple of basketball coaches allegedly — although nobody can ever prove this — were alleged to have retitled themselves as independent contractors in order to be able to take advantage of it for their multimillion-dollar incomes," Kriz says.

The theory of the plan — supply-side or trickle-down economics — is a divisive one. For decades, Republicans have touted the economic theory, which seeks to create growth through lowering taxes and decreasing regulation.

"Any serious model tells you that economic growth always leads to increases in revenues, not reductions in revenue," says Arthur Laffer, an economist who advised President Ronald Reagan and the Trump campaign, among others. He helped create the Kansas tax plan and is considered by many to be the father of supply-side economics.

But when the tax cuts went into effect in 2014, their failure was seen almost instantly. State revenues plummeted by almost $700 million, Kriz says.

"To put it in context, the state general fund budget is about $6 billion, and so that's 10 percent revenue loss in one year," he says. "That's a lot for any government to have to make [up]."

State lawmakers tried to balance the budget by tapping into reserves and the highway fund. They put construction projects on hold; pension contributions dropped; and Medicaid was cut.

The state also refashioned the school funding formula and closed and consolidated several school districts. School funding consumes about half of Kansas' budget.

Loomis says the Kansas experiment occurred after a shift in the state Legislature.

Since the 1970s, the state government had been moderately conservative and "pretty much reflected the nature of Kansans," he says. Then during the Tea Party wave in 2010 — when hundreds of congressional and state government seats were won by Republicans — the Kansas Legislature moved further right. Brownback, who had served 14 years in the U.S. Senate, was also elected as governor.

Because of the state's deficit problems, Brownback did not run for president in 2012, and he barely won re-election in 2014. Republicans in the Legislature voted to overturn his tax cuts with the support of Democrats, who helped override the governor's veto.

"So you had moderate Republicans who made a resurgence in 2016," he says. "You had Democrats who did well in 2016, but the last few votes in both the Senate and House were really quite conservative Republicans who just sucked that up and said, 'We really need to have revenues or this state is going to be in huge, huge difficulties.' "

Despite the $1.2 billion tax increase that passed last year, the budget mess is far from over. Brownback has been nominated to serve in the Trump administration, and once he is confirmed, Lt. Gov. Jeff Colyer will finish his term.

While many experts regard the Kansas tax cuts as a failure, Trump's proposed tax plan echoes Brownback's policy, and many Republicans still embrace the ideology behind it.

"There's lots of economic data that lower taxes mean a much better economic growth," Colyer tells Here & Now's Jeremy Hobson. "I worked for President Ronald Reagan. I saw it firsthand. You know, we see those things on the national level."

The Trump tax overhaul aims to spur revenue by cutting taxes for American businesses and earners, including the wealthiest Americans. The Senate voted last week to further a budget bill needed to advance the plan.

The corporate tax cuts proposed — the plan would drop rates from 35 to 20 percent — would increase the typical household income by $3,000 to $7,000 a year, according to a report by the Council of Economic Advisers.

But as Washington considers a plan similar to Kansas, Kriz is unconvinced.

"Studies have shown that tax cuts tend to pay anywhere between 10 percent and 30 percent of their costs," he says. "So if we cut taxes by a trillion dollars, we're going to probably get an extra hundred billion back ... in extra revenues from economic growth. But that still leaves $700 [billion] to $900 billion in cuts that will have to be made. Those cuts also have an economic effect in drawing down the economy."