Accessibility links
An Interview With Big Thief's James Krivchenia The drummer shares why his bandmates kneel when Adrianne Lenker plays solo, the importance of respecting your bandmates, and what it's like to have such a devoted fanbase. 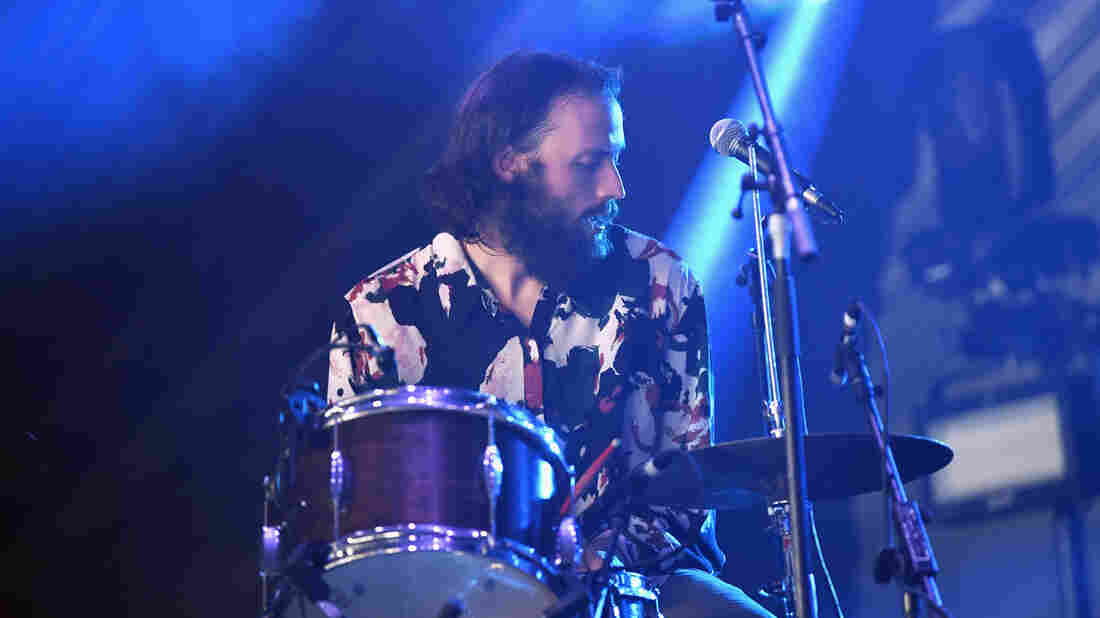 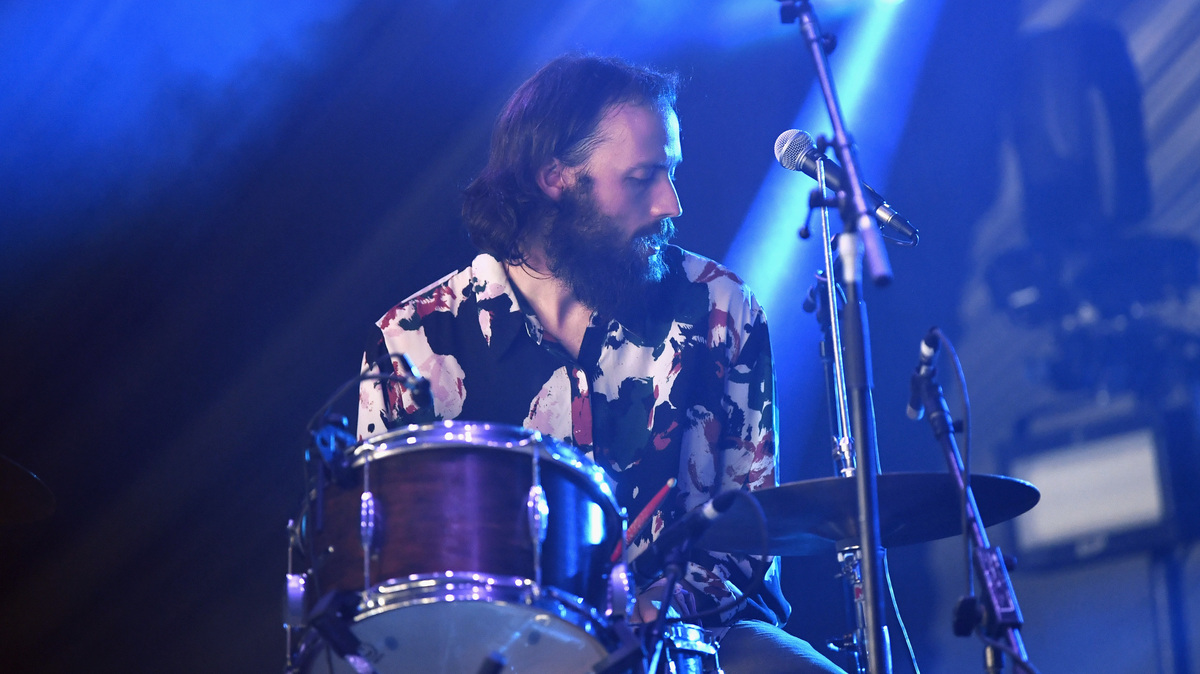 Half a minute into the first track of Big Thief's second album, Capacity, I thought of a lyric by Jenn Wasner from her solo project Flock of Dimes: "It is the quiet voice that says it best." The further I ventured into Capacity, the more that lyric became a mantra.

It is impossible to imagine any other voice but Adrianne Lenker's driving ship on this intimate and earnest album. It is a voice that is quiet, yes, but never mild. It is as bold as it is timid, as thunderous as it is subtle. And what's said best are sincere if not solemn stories about family, relationships, nostalgia and pain — and the inevitable complications when all come into play.

It is a (beautifully) tricky voice to pen, but for drummer James Krivchenia and his bandmates, one that is not difficult to follow. Over the phone on his way to a show in San Francisco, Krivchenia shared this with me, but, he needn't have. Even upon first listen, it's obvious that these artists respect not just the voice pouring into the mic, but the soul that stands behind it.

Tours bring late nights, stressful schedules and the absence of a home mailing address. That can be a beating — and even a demise — for any artist or band. But when it comes to Big Thief, I have no worries. Besides the obvious raw talent, respect will carry this band far — much farther, perhaps, than even they know themselves. That quiet voice will be echoing through our headphones, our concert halls, our cities for many years to come.

Lauren Menking: First and foremost, congratulations on Capacity. It's a beautiful album, and the follow-up to the band's debut album, Masterpiece, in 2016. Two records. Two tours. Two years. That's no easy feat — I mean, how are you? Are you exhausted?

James Krivchenia: Yeah, we are exhausted. But, we're good though. Like, I feel energized when we're playing the shows. And we have some time off in the winter. We are pretty tired, but it's happening, it's OK.

I'm sure from an artistic standpoint you're never not making music, but a lot of work goes into heading off to record an album. How did all the puzzle pieces fall into place right after Masterpiece?

It was just sort of serendipitous. A friend of ours who has a studio in upstate New York called Outlier, he was a fan of our music, and he had invited us up there to record for a few days just to, like, check it out before the making of Capacity, in the summer — kind of around when we were making Masterpiece, just to hang. While we there he was like, "Wow, you guys are awesome." He knew I was a recording engineer and he trusted our producer, [Andrew] Sarlo, who is also a recording engineer and he was like, "Hey, I'm going to be gone for a couple months in the winter if you guys want to take the studio for a month, I'll give you a really good deal for it." And we basically had it for free, just had to pay for electricity and all that stuff. So it just sort of happened where we had this time and it was a really great opportunity. And Adrianne [Lenker] always has a lot of songs and she had a lot of songs then, so we made the record. It just felt natural.

What was that like, living together and making music together? It seems like y'all do really well in close proximity to each other.

Yeah! It was good. It was intense — it was the wintertime, so there weren't a lot of opportunities to be outside. We were very, like, in the studio the whole time, or in the house next to the studio where we were living. So, it was intense, but it was intense in a good way. I feel like it's always going to be intense for us when we focus that hard on making music.

I was born in Minneapolis and grew up in Chicago.

So you're no stranger to the snow then.

So you weren't the drummer on Masterpiece, but you did engineer the album. What did you first think when you heard Big Thief's music?

I loved it. I've been a fan of Adrianne. I knew of her solo stuff and had seen her play around New York and we had mutual friends. I had seen her and Buck [Meek] play together a lot. So, I was a casual fan of their music. I was engineering and working a lot in studios in New York and also playing in other bands, and this opportunity came up through mutual friends of ours, and we had a little talk and it just clicked, like, "Oh, yeah, we'd like James to come engineer." And I was good friends with Andrew Sarlo who produced the record, and he was really trying to get me to do it and I was just like, "Yeah, I'd love to."

Did you also engineer Capacity, or just Masterpiece?

Just Masterpiece, technically. Sarlo did most of the engineering on Capacity. I mean, it's a collaborative thing always when you're working, especially with people who are engineers themselves. I didn't want to have my head in both worlds of, like, worrying about sound. I mean I was really worried about sound, but I didn't want to be in microphone land. I wanted to be in the "Am I going to give the best performance I can give right now?" kind of head space, and not pushing out mics all the time and stuff like that.

Your bandmate, Adrianne, has such a unique voice — it's gritty yet smooth, it growls yet soothes. I'm curious, as a drummer, how do you approach complementing that powerful voice when you guys are making music?

Yeah, she's really dynamic. And she can be so, so soft. It's mostly just being really sensitive to the dynamic energy of where she's at when she's performing. Sometimes she'll be in a really quiet space and her energy will dictate sort of where we follow her to. And sometimes that means being really relaxed, being really quiet, playing under certain songs that are really lyric heavy so those can come out. But it also means, you know, when it gets loud and wild, pushing that forward and pushing it more and more. It's a back-and-forth. I follow her a lot and her energy that she's putting into a specific performance.

I love that. It sounds like y'all have really profound respect for each other as artists and as people.

Is it true you kneel when she plays solo, or was that a one-time thing?

Oh, yeah, Max [Oleartchik] often does that. Max likes to sit down or get on the ground. Max and Buck will do that often. I usually just sit back, but I like being present even when it's, like, a solo thing because I think it's powerful to have people on stage choosing not to play their instruments and that being part of the performance. Like, it's not an ego thing to have to get my drumming in on this song. It's like, "Oh, this song is awesome without me, and my performance is my choice not to play right now."

Well, speaking of Adrianne, I love this comment she made to the Chicago Tribune once. She said, when you guys make a record, it's reflective of "a time and a place and a state that [you're] in" and it doesn't necessarily grow with you, but rather it captures a moment in time. I'm curious — what did this album, Capacity, capture for you guys?

Yeah, you know, I think it captured a moment of — well, we're always still figuring it out — but then it was very specifically just after our first two or three months of touring together and actually playing together as a band a lot, and we were still figuring out a lot of stuff. And the way we recorded it just was Adrianne would show us a song — and we had heard them because she had sent us demos and voice memos — but we'd learn them together and it was the beginning of that chemistry between the four of us creating songs together, creating arrangements together. So, yeah, it was special. It felt like a first step in a lot of ways. We've definitely grown a lot since then. We were definitely giving our all into that process at that time, for sure.

From the get-go, critics and fans have been prophesying your band's "big, bright future"and the positive direction you're headed in. Has that at any point been intimidating or overwhelming, or do you just tune that stuff out?

I guess I can only speak for myself, but I really don't read press stuff that much. I will read some here and there, and of course it gets to us that there's good press and things like that. But, we sort of made it a point to purposefully tune that out because it's very easy to not tune it out and lean on that. But the press stuff doesn't excite me that much. I am excited about the future and the stuff we're going to make. I have a lot of ambition about the music we're going to make.

You guys have cultivated a really tight-knit, devoted fan base. I think, in large part, what they respond to in your music is the vulnerability and the humanness you bring to the table. Are you able to connect with fans face-to-face while you're touring?

Sometimes yes and sometimes no. It's sort of a night-to-night energy thing. It's kind of a new realm we're navigating right now — just the overwhelming-ness of that many people at a show. It's become impossible to have any real connections, to go out and actually have a meaningful connection with 30 people is impossible. And trying to do that is, in a way, dishonest with yourself and the people you're talking to. It's much more crazy for Adrianne than it is for the rest of the band. You have to put up certain walls of space, but we do talk to fans all the time. It's great to look out and you can see it in people's faces that it means a lot to them.