Accessibility links
'Suburbicon': Two Storylines, Separate But Unequal This film, directed and co-written by George Clooney, "is a solid 95-minute noir caper artlessly bolted to a 10-minute social drama, and a shockingly tone-deaf one at that." 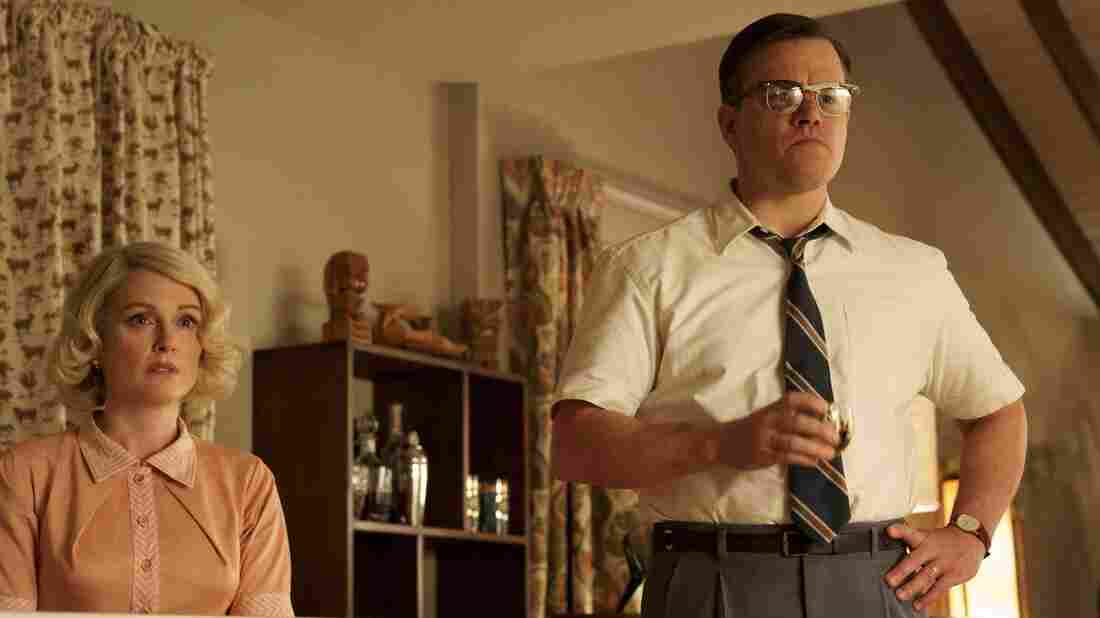 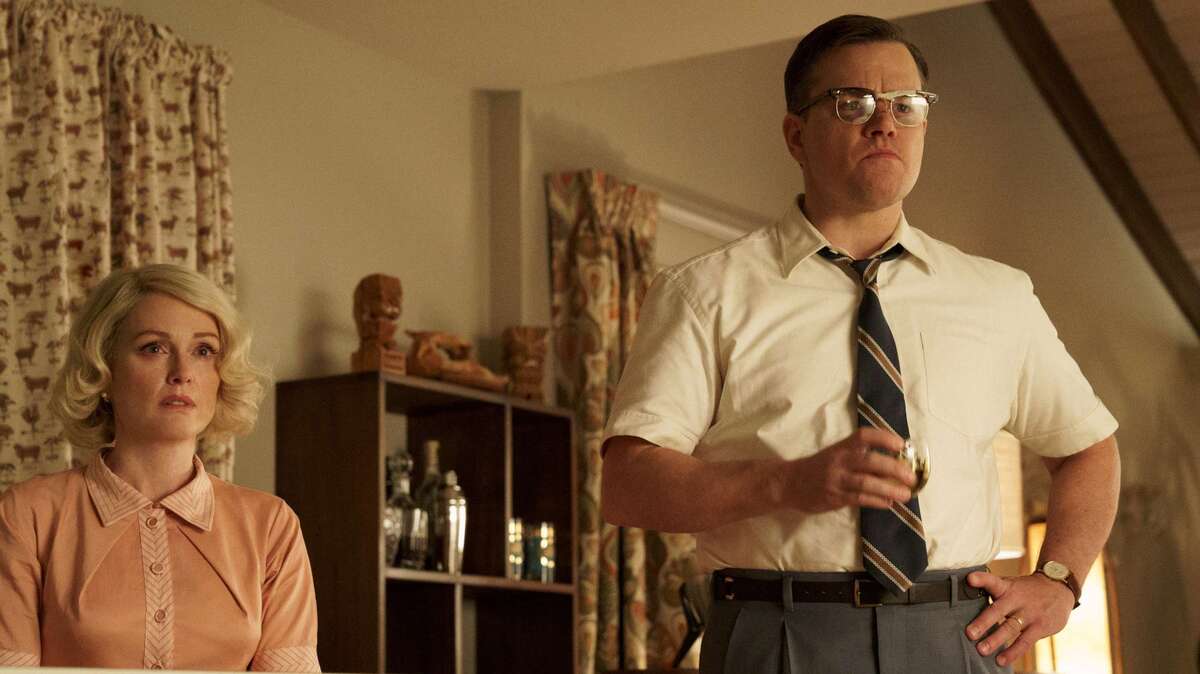 Well, at least George Clooney can still claim to be the handsomest screenwriter/producer/director in Hollywood.

But 15 years and a half-dozen features into his career behind the camera, it's increasingly apparent that learning through osmosis — even when you make a habit of working frequently with top-flight filmmakers like Steven Soderbergh and Joel and Ethan Coen — can carry you only so far. Suburbicon, Clooney's latest as co-writer, producer and director, is a solid 95-minute noir caper artlessly bolted to a 10-minute social drama, and a shockingly tone-deaf one at that. You can't fault the guy for not having the delicate touch the Coens have brought to proto-noirs like Blood Simple and Fargo and The Man Who Wasn't There. You absolutely can fault him for wrongheadedness in making a movie that condemns racism (and specifically segregation in the postwar housing boom), albeit in the most broad, perfunctory, awareness-ribbon-wearing way while barely allowing its black characters to speak. Suburbicon might be the biggest embarrassment to pious Hollywood liberalism since Crash won best picture in 2006.

The Coens aren't a mere influence here. They actually wrote the first draft of the script in the '80s and then approached Clooney about it in the late '90s, when movies like Out of Sight and Three Kings were proving him to be an actor of deeper capacity and more discerning taste than he had shown previously. But it was Clooney and his usual writing-and-producing partner Grant Heslov who, many years later, thawed out the presumably homily-free Double Indemnity-type crime script the Coens had written and combined it with a project of their own about William and Daisy Myers, the first black couple to buy a house in all-white Levittown, Pa., in 1957. The Myerses' white neighbors welcomed them with harassment, intimidation and violence, surrounding their home for an all-night white pride rally that turned into a riot.

Surely that terrible true story could sustain a feature on its own, but Clooney and Heslov's rewrite fictionalizes the Myerses with a subtle name change (Karima Westbook and Leith M. Burke play a couple called the Mayers, though she has only two scenes and he doesn't even get a line) and proceeds to treat them as mere scenery for the story they're actually interested in telling. That would be the one about the Lodges, the white family whose backyard adjoins the Mayerses'. They're played by Matt Damon and Julianne Moore (in a dual role as twin sisters, briefly, that includes a nod to Kim Novak's character from Vertigo). Early in the film they're the victims of a violent crime. It doesn't take us long to discern that the home of the upstanding Lodges is in fact a nest of vipers, while the Mayerses' place is ... well, we infer virtue, from the way Westbrook's Mrs. Mayers maintains her dignity when the manager of the local grocery store makes it very clear her family's business is unwelcome. But it's virtue of the generic, abstract sort that Sidney Poitier used to complain about — he got tired of playing saints after a while. We never learn anything else about Daisy or her silent husband.

It's Andy Mayers (Tony Espinosa), the couple's preteen son, who does most of the talking for his mom and dad: He befriends young Nicky Lodge (Noah Jupe), and when the little white kid and the little black kid are taking a stroll down the sidewalk to the baseball diamond together, Clooney pans over to a bunch of pasty, burly, crew-cut Biff Tannen types to make sure we know this is going to spell trouble.

As clumsy as that is, the movie is at its best when it makes us experience its terrors through the eyes of those two kids. Jupe's performance in particular has none of the weaknesses that so often afflict child actors; he doesn't look like he has a publicist. He is completely believable as a terrified little boy.

Ironically, Suburbicon would be less of a disappointment if so much of it weren't so good. Damon gives another one of his strong weasel performances, as in The Talented Mr. Ripley or The Departed. Moore is even better as a conspirator with bottomless avarice but a limited playbook. There are, as is customary in Coens-penned crime movies, a pair of bumbling but still frightening heavies, and Glenn Fleshler and Alex Hassell are well-matched in these roles. And the great cinematographer Robert Elswit, who shot all of Paul Thomas Anderson's movies along with Clooney's, gives the whole thing a glossy period look that emphasizes the artifice of the environment. Best of all is Oscar Isaac, who shows up for a few scenes as an insurance dick who smells a rat and instantly supplies the comic dexterity we've been missing. When he runs away screaming, he steals the movie with him.

Clooney says that the Coens originally offered him the role he cast Isaac in, back when they were going to direct Suburbicon themselves. That version might've amounted to one of their lesser efforts. But it's hard to imagine that it would've been as queasy to sit through as this one.