Accessibility links
Stream Shamir's New Album, 'Revelations' Shamir Bailey's stripped-down, self-produced songs are brimming with self-assurance and confidence, even in the midst of anxiety and heartache. 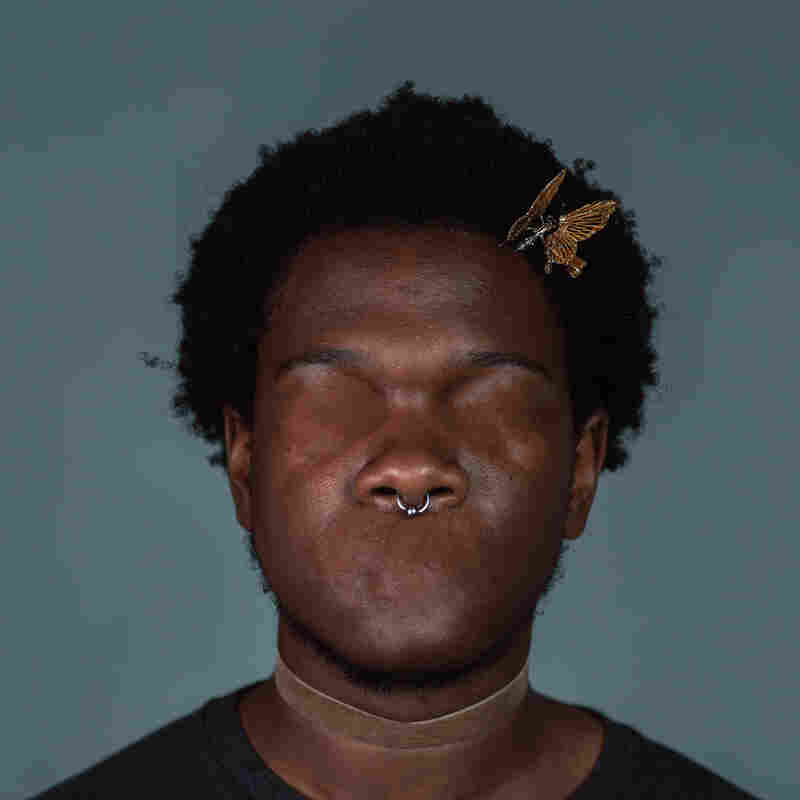 You can sense from his album art alone that Shamir Bailey — who writes and performs melodic outsider pop under his first name — reveals and obfuscates himself in equally cautious measure. In the years since his neutral, warm smile graced the cover of 2014's Northtown EP, the 22-year-old Las Vegas native's depictions have been anything direct. On Shamir's debut LP, Ratchet, he was transformed into a neon line drawing; on the cover of his unannounced sophomore album, Hope, his hands covered his face in an expression of joy or grief (or perhaps both).

The cover of Revelations (out Nov. 3 on Father/Daughter Records) finds Shamir more distant than ever, featuring a downright creepy photo of the artist in which his eyes and mouth have been edited to blend seamlessly into his skin. The photo appears to allude to something Shamir has faced throughout his short career: attempts to silence his voice. He was dropped from XL Recordings after Ratchet's release; he then considered quitting music altogether and dealt with hospitalizations due to mental health struggles. He's also had to contend with the confounding social pressures and expectations placed on him as a queer black artist (not to mention the way his androgyny became the center of nearly all media attention on him).

And yet, Revelations feels like Shamir's most vulnerable and sure-footed work; its stripped-down, self-produced songs are brimming with self-assurance and confidence, even in the midst of anxiety and heartache. "We gotta learn to love ourselves," he sings on "Cloudy." On "Blooming," he announces: "I'm too strong to just lay down and die." And he confronts the forces that sought to silence him directly and indirectly on the album: "Games" explores frustration over the commercialization of art ("I don't have much to offer you / But my soul, my heart, and everything I've been through / But you just see the green"); "Straight Boy," Shamir explained to NPR Music, came out of frustrations with "whitewashing and queer baiting in media."

The disco-infused dance sound of Ratchet that built Shamir's early reputation — and which mostly disappeared on Hope — is absent from Revelations, replaced by strummed electric guitar and a smattering of electronic production. But abandoning the sound that made him famous doesn't feel like a step back — it's more of a step inward. Shamir's musical roots actually rest in country and rock; he grew up listening to country music, skipped high school prom to see Paramore and said that, while working on Ratchet, electronic music was something "completely new" to him. He hardly touched any production on Ratchet; since then, he's taken all aspects of creating his music into his own hands. The resulting fuzzed-out lo-fi pop feels deeply intimate, yet just as communal and inviting as his club-ready dance music.

The more minimal instrumentation on Revelations serve to highlight what has always been Shamir's strength: his knack for earworm melodies; his expressive, youthful countertenor; his lyrics that read like common sense poetry, like entries from your best friend's diary if your best friend was overloaded with teenage sensitivity and snarky wit. Songs like "90's Kids" and "Straight Boy" switch masterfully between bitter quips and painful honesty; on the former, for example, he describes the shortcomings millennials are accused of (vocal fry, being vain) and what we're actually concerned about (crushing student debt and self-hatred). The song, like much of the album, is as much a rallying cry among friends as an honest, witty invitation into Shamir's interior world that reveals the artist — finally himself, fully in control — to his listeners.