Accessibility links
Women Are Speaking Up About Harassment And Abuse, But Why Now? Harvey Weinstein, Bill Cosby, Roger Ailes, Bill O'Reilly. More and more women are calling out their alleged sexual harassers and abusers. But why is it all happening now? And is this a turning point? 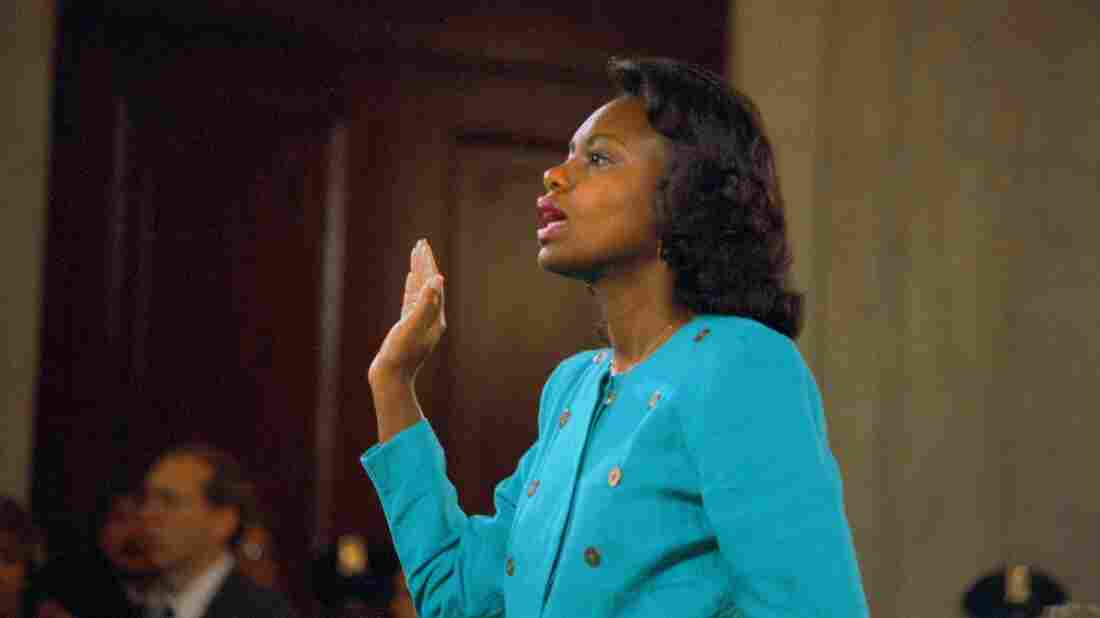 Anita Hill is sworn in before testifying during Senate hearings on the confirmation of Clarence Thomas to the Supreme Court in 1991. Bettmann Archive/Getty Images hide caption 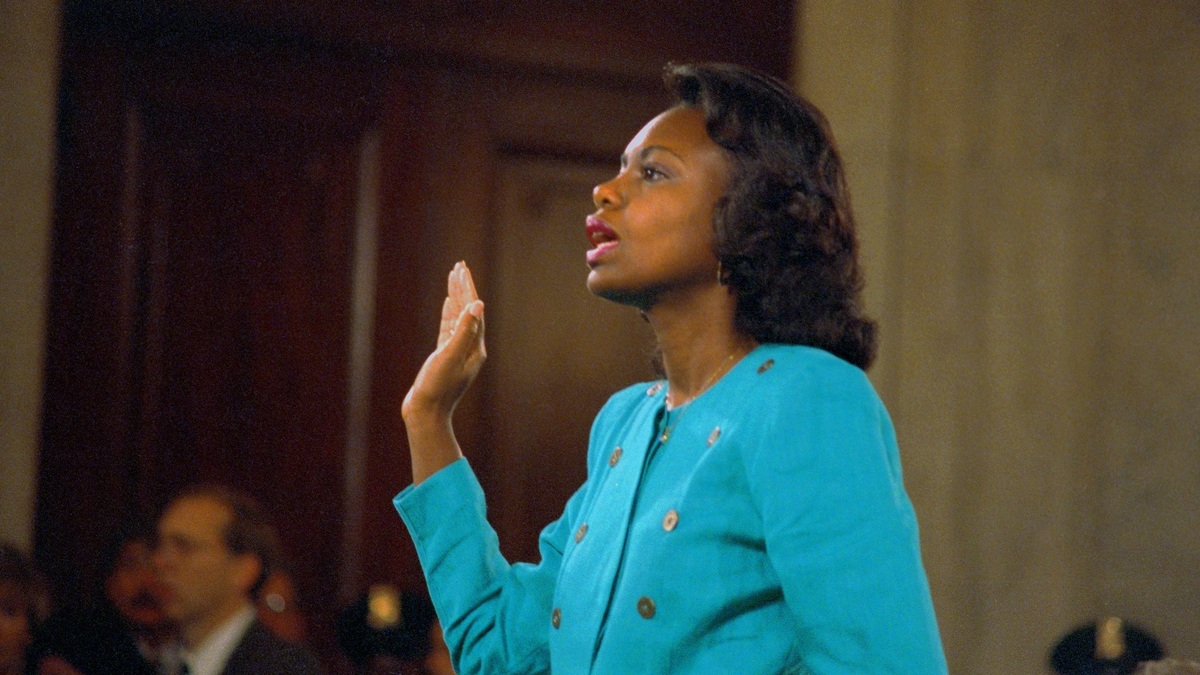 Anita Hill is sworn in before testifying during Senate hearings on the confirmation of Clarence Thomas to the Supreme Court in 1991.

For decades, women generally kept quiet about being sexually harassed — or even assaulted — at work. But that may be starting to change. The recent New York Times and New Yorker exposés on Harvey Weinstein helped open the flood gates for women who allege they too have been victims. The #MeToo campaign lead to more stories. So we wondered — why now?

Let's start by taking a look at what happened to a woman who came forward at a time when we didn't talk about this stuff. In October, 1991, all eyes were on a Senate hearing in Washington: Anita Hill — an African-American law professor — went before an all-male panel to testify that then-Supreme Court nominee Clarence Thomas had sexually harassed her. "His conversations were very vivid," she told them. "He spoke about acts that he had seen, and pornographic films involving such matters as women having sex with animals, and films showing group sex or rape scenes."

It was a very, very trying day ... They were exhibiting the exact kind of behavior that keeps people from coming forward.

In response, the senators grilled her. "Why in God's name would you ever speak to a man like that the rest of your life?" asked Wyoming Republican Alan Simpson. "How could you allow this kind of reprehensible conduct to go on right in the headquarters without doing something about it?" thundered Pennsylvania's Arlen Specter. And of course this, from Alabama Democrat Howell Heflin: "Are you a scorned woman?"

Anita Hill kept her cool. "It was a very, very trying day," she says. Today, Hill teaches law, social policy and gender studies at Brandeis University. She says that by asking questions like '"why didn't you speak up?" the senators were providing their own answers. "They were exhibiting the exact kind of behavior that keeps people from coming forward."

"That could never happen now," says Niobe Way. "The one good thing I have to say about the culture right now is, literally, that could never happen now." Way teaches developmental psychology at New York University. She remembers watching the Anita Hill hearing. "Looking back on it, it sort of embarrasses me that I didn't see it as the larger issue that it was. I saw it as an issue true to that context, and that Anita Hill was speaking her truth. But I didn't see it as a larger pattern."

And while many people discredited Hill, her testimony opened the window. Sexual harassment claims to the Equal Opportunity Employment Office doubled. Over time, awareness and coverage of sexual misconduct became part of the culture. "Since 1991, we have been raising children — daughters in particular — with the understanding that sexual harassment is illegal, shouldn't be tolerated, and that it's wrong," Hill says.

The more women speak out, the more other women want to speak out.

And more and more we have scenes like the recent press conference given by attorney Gloria Allred, in which she introduced two more women accusing Bill Cosby of sexual assault. Allred represents many alleged victims of such high profile figures as Cosby and Weinstein, and her work covers sexual misconduct cases in entertainment, the military, sports and other fields. "I like women to have access to justice," she says.

Allred thinks the reason so many women are coming forward now is a kind of domino effect. "The more women speak out, the more other women want to speak out," she says. "And those who have, in their view, perpetrated wrongs against them now are facing accountability in the court of public opinion. The wrongdoers — or the alleged wrongdoers — have faced severe consequences themselves."

Cosby. Bill O'Reilly. The late Roger Ailes. Harvey Weinstein. Mighty figures continue to fall, daily. Did their accusers speak out because of the reasons we've talked about — strength in numbers? Greater awareness? Consequences for perpetrators? Reporter Ronan Farrow, who covered Weinstein for The New Yorker, told NPR earlier this month that there's another reason women are coming forward. "A factor in their decision was that he was less able to hurt them, was one exact quote that was used by one," Farrow said. "And look, you've seen that in a number of cases about high-profile men recently, that allegations only emerged when their grip on power and success slips."

... you've seen that in a number of cases about high-profile men recently, that allegations only emerged when their grip on power and success slips.

But most everyone I interviewed for this story says the real catalyst has to do with the infamous Access Hollywood video released by The Washington Post last year, in which Donald Trump brags about grabbing women. That tape rankled a lot of women — and then, during the presidential campaign there were also allegations of sexual misconduct against Trump.

"Trump has reinvigorated feminism and the women's movement in a way that nothing has done for decades," says journalist Jodi Enda. She points to the Women's March on Washington the day after President Trump's inauguration. The march drew one of the largest crowds ever to the nation's capital. Enda covered it for CNN. "That was sort of the first inkling that we had that this was really something," she says. "That women were upset, and — like the old movie — they weren't gonna take it anymore."

But, clearly, not every woman feels the same way — 42 percent voted for President Trump. It's also true that there are plenty of women who don't feel safe speaking up about sexual harassment and assault. So does the fact that so many are coming forward now mean we've reached a true turning point? Niobe Way says no. "We don't address the problem. The deeper, deeper problem — not the superficial problem, but the deeper problem."

We essentially raise boys in a culture that asks them to disconnect from their core humanity, which is their desire for relationships and all sorts of things the boys articulate that they want.

That problem is the way boys are raised, says Way. She's been looking at this for more than two decades — her book is called Deep Secrets: Boys' Friendships and the Crisis of Connection. "We essentially raise boys in a culture that asks them to disconnect from their core humanity, which is their desire for relationships and all sorts of things the boys articulate that they want," she says. "Not only disconnect from it, but say 'if you are that way, emotional, relational et cetera, you're not a man.'" Way says that leads to a culture that accepts lonely and aggressive boys, and ultimately puts them in positions of power.

I ran this idea by some students at American University. Men and women alike nodded in agreement. "The first thing that came to my mind is the whole 'boys will be boys' thing," says Jean Thompson. She and fellow student Matt Goldan point to movies and TV shows that depict the old stereotypes: Superman. Romantic comedies.

"In the culture, you have a sense of toxic masculinity, where men are kind of expected to have bravado, to be a little bit more aggressive in talking to women," he says. "Pay for dinner," Thompson interjects. "Pay for dinner, yeah, absolutely," Goldan says. "So right off the bat you have a sense of very very different roles. And I think it makes it easier for that whole messaging to get distorted in a way that could be conducive to sexual assault.

And not just sexual assault, says Niobe Way, but all kinds of violence. She says our culture continues to divide these problems as if their roots are different. "We look at mass violence and we're all writing articles about mass violence. Then we have a rapist and we're all writing articles about rape. The we have an article about police violence and we're focused on police violence, without understanding there's a common root across these problems. If you raise boys to go against their nature, some of them will grow up and act crazy."

Meantime allegations of sexual misconduct — and consequences for the many of the accused — continue to rise.

This story was edited for radio by Rose Friedman and adapted for the web by Petra Mayer.