Accessibility links
After 'Choosing Donald Trump,' Is The Evangelical Church In Crisis? In his new book about the president and faith, author Stephen Mansfield argues evangelical witness has been hurt by the church's support for Trump. 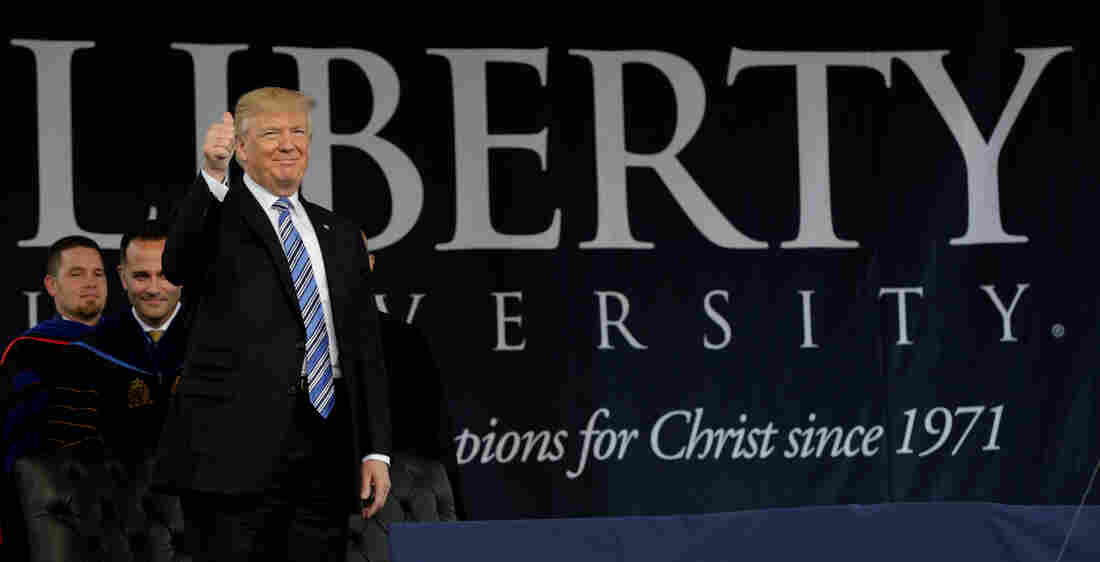 President Trump addresses the crowd before delivering the keynote address at Liberty University's commencement in Lynchburg, Va., on May 13. Yuri Gripas/Reuters hide caption 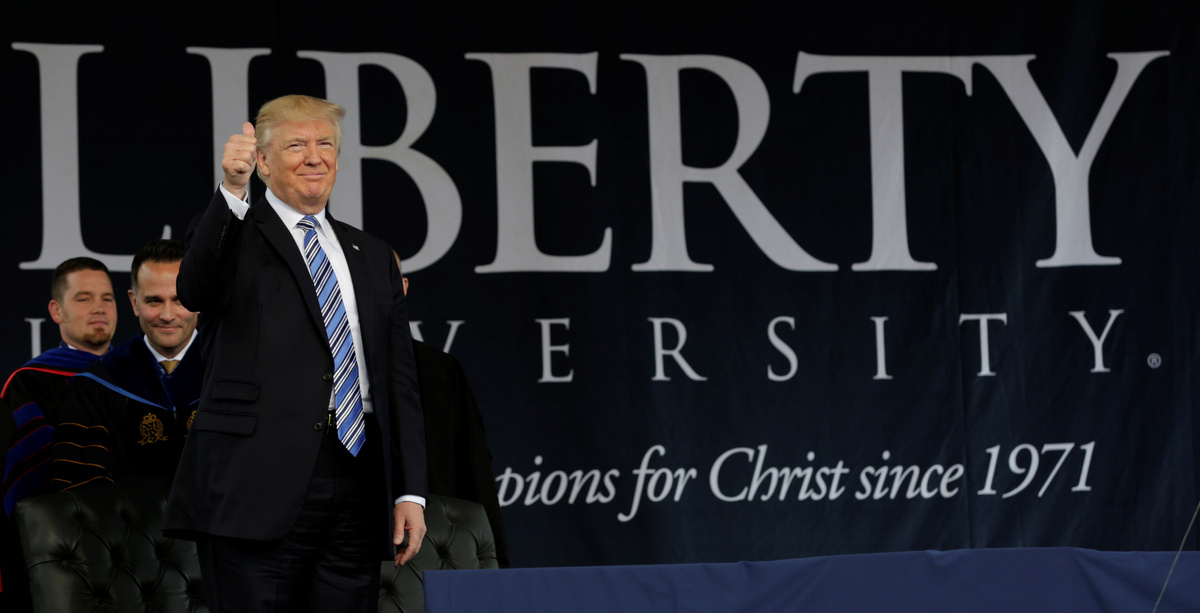 President Trump addresses the crowd before delivering the keynote address at Liberty University's commencement in Lynchburg, Va., on May 13.

When Donald Trump announced he would be running for president, he didn't seem like the obvious candidate for evangelical voters, given his multiple divorces, use of crass language and one-time admission that he had never asked God for forgiveness.

Nonetheless, he did manage to coalesce 81 percent of white evangelical voters behind him in November.

Almost a year since Election Day, President Trump's unlikely marriage with the religious right seems to have only strengthened, as seen at the Values Voter Summit earlier this month. Trump administration officials peppered the speaker list, and attendees praised the president as having been chosen by God to lead the country at this time. 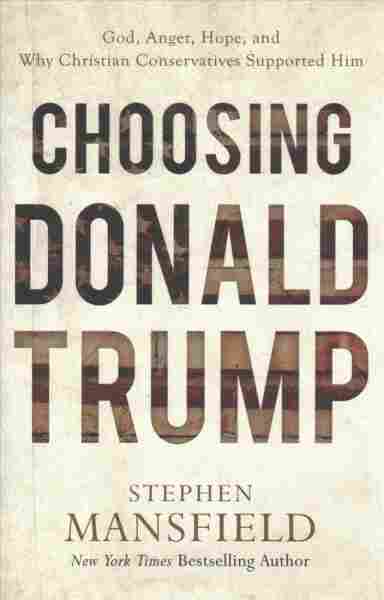 God, Anger, Hope, and Why Christian Conservatives Supported Him

As author Stephen Mansfield details in his new book, Choosing Donald Trump: God, Anger, Hope, and Why Christian Conservatives Supported Him, Trump was able to tap into resentment within the parts of the evangelical community that boiled over during former President Barack Obama's tenure. They feared that religious freedom was under assault as a result of actions like the administration's birth control mandate and protections for LGBT people.

"Fear, anger — both of those played a huge role," Mansfield told NPR. "And Donald Trump definitely seemed to be the champion of those two dynamics, those two emotions."

According to Mansfield — who has written about the faith of former Presidents George W. Bush and Barack Obama — Trump spoke evangelicals' language on many issues. Trump promised to repeal the Johnson Amendment, which regulates political speech from the pulpit, and pledged to nominate a conservative Supreme Court justice to the bench, which he did in Neil Gorsuch. And many prominent faith leaders — including Liberty University's Jerry Falwell Jr. and First Baptist Dallas' Robert Jeffress — didn't just endorse Trump, they gave him their most full-throated blessing and defense.

But that fervent support from evangelicals may have come at a cost, Mansfield argues, as they overlooked actions that could be taken as antithetical to their faith, including comments about women and race. There have been growing racial and generational divisions within the church, Mansfield says, and Trump's election seems to have brought some of those simmering tensions to the surface, putting evangelicalism at a potential crossroads.

True Believer? Why Donald Trump Is The Choice Of The Religious Right

Yet a younger, more diverse generation of evangelicals appears skeptical.

Mansfield recently talked to NPR about his book, Trump's history with religion, lessons learned from the 2016 election and what Trump's presidency has meant for evangelicals. The interview excerpts below have been edited for length and clarity.

Do you think that the number of evangelicals and evangelical leaders that have backed Trump has done harm to their witness?

I think it has, yes. I think that they are especially going to lose influence amongst millennials, who are strongly social justice-oriented, and the surveys indicate that the vast majority of them are very suspicious of Donald Trump.

You've got an unusual situation here where the leaders of the religious right are not only having to account to a watching world for why they compromised their religious message to support Donald Trump, but you also are going to have some blowback from the very people that the religious right is trying to reach. The very people these pastors are trying to reach — the young, people of color, etc. — I think they may have lost them and, in some cases, permanently.

We saw a stark difference between how white and black evangelicals voted. How much do you think Trump's selection widened the racial chasm in the church and made racial reconciliation even even harder?

I think it has exacerbated the problem tremendously. One of the points I make in the book is that a pastor or religious leader can endorse Donald Trump but not have to, as we say in our crass phrase, get in bed with him or become part of his PR team.

But a lot of those public leaders were very outspoken for him. Never did we hear anyone say publicly, "Sir, you're making racist statements, sir, when you say that a Mexican judge can't rule justly in a case involving you, you know, you've crossed the line." Never did we hear those religious conservatives who supported him speak out about these race issues. We didn't see them marching in Ferguson; we didn't see them meeting with the leaders of Black Lives Matter.

So there they did exacerbate a racial chasm, whether they intended to or not. I think we're going to be paying for that for quite some time.

Has this election exposed a generational divide among Christians?

It has. In the end, the word that is used most often when I talk to the young is "hypocrisy." They sat in their churches, and they heard certain conduct described as wrong. Yet when Donald Trump did it, or when it was reported on a video, we heard kind of a "boys will be boys" sort of response even from very, very prominent religious leaders. They began to wonder if the message they had been hearing all those years in church was consistent with the people they had respected.

In the end the word that is used most often when I talk to the young is 'hypocrisy.'

It's really thrown a lot of them into real turmoil, and I think as a result we're going to see the number of "religious nones" increase, because many of them will continue to be religious, continue to be believers in God. But they are losing confidence in the church they were once part of, and in some cases, that's a direct result of what happened in that election.

You explore the Johnson Amendment and the history of it in the book and why Trump seized upon promising to abolish it. Why do you think that was what was so effective?

I think it was effective because it was almost like code language in a sense. I'm not really frankly sure that the average pastor, a religiously conservative pastor, thinks daily about the Johnson Amendment and can't wait until it's abolished.

But I think those listening sessions that [televangelist] Paula White scripted for Donald Trump, Donald Trump did hear about the Johnson Amendment, it was something he could do. And so as he began talking about it, he realized that it echoed with a lot of religious conservatives and at least said, "I'm concerned about your issues. I want to try to liberate your pulpit. I want to allow you to speak in spiritual terms about politics." This was something that they had heard the opposite of from the Obama administration, and so it signaled more than it was really worth in political capital.

You write a lot about the influence that Trump's pastor Norman Vincent Peale had on him and Peale's book, The Power of Positive Thinking, which was quite controversial at the time. Peale seems to have almost been a precursor to the prosperity gospel, which Trump seems to have aligned himself with the most, along with people like Paula White.

Norman Vincent Peale himself said, "I believe personally in the 'born again gospel,' but I talk about that in my church. Publicly, though, and in meetings around the country around the world, I talk more of a motivational kind of message." And that's, I believe, the message that Donald Trump really drank from. I think that's the one that really shaped him. For example, not only "the power of positive thinking" was one of Norman Vincent Peale's phrases, but he also would go around saying, "Attitude is more important than facts."

Well, if there's anything that we see with Donald Trump, it's that he believes that attitude, bravado. This is straight from Norman Vincent Peale. So I don't think he absorbed the message of transformation through Christ that Norman Vincent Peale believed but didn't proclaim very publicly.

It seems like the conclusion that you draw in the book is that evangelical Christianity is in a state of crisis right now. Has that been exacerbated by Trump, and where can they go from there?

Yeah, it has been exacerbated, and they are in crisis. And I think there's a lot of healing that that needs to happen. I mean, I know of large families that have met for Thanksgiving dinner and didn't meet this last Thanksgiving, and the dividing issue that brought strife was the Trump presidency. I know churches where there have been splits. I know of tension on church staffs.

There's a great deal of turmoil, and evangelicalism as a whole is in flux, and a lot of it has to do with politics. I know many people who are saying, "I'm not sure I'm staying in the church that I've been attending because it's become so political." I have heard that phrase probably two dozen times.

It's a tragedy. In fact, if you say the word evangelical to those outside of evangelicalism, they assume it's a political movement, and that's part of the problem. They don't know that it's more because that hasn't been the public face of evangelicalism.