Sakdiyah Ma'ruf grew up watching bootleg videos of Roseanne Barr and Jerry Seinfeld. Now she is breaking ground as a stand-up comedian who wears a hijab while openly mocking religious fundamentalists. 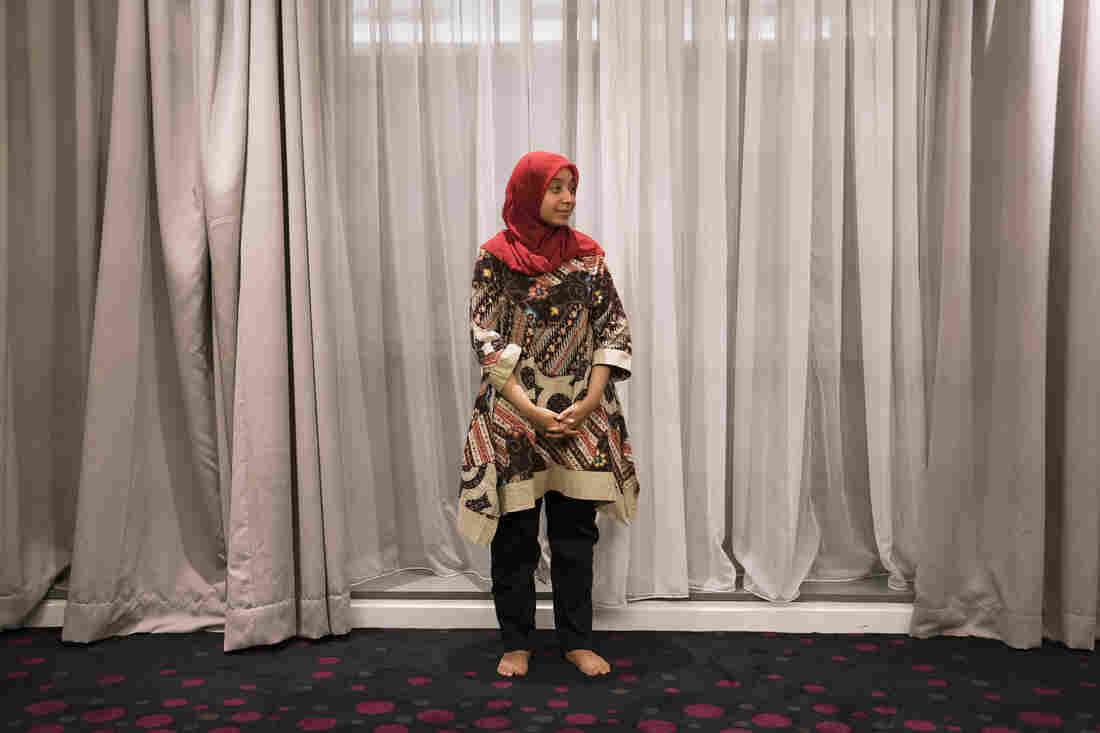 Sakdiyah Ma'ruf is a comedian in Indonesia. Now she is breaking ground as a stand-up comedian who wears a hijab while openly mocking religious fundamentalists. Claire Harbage/NPR hide caption 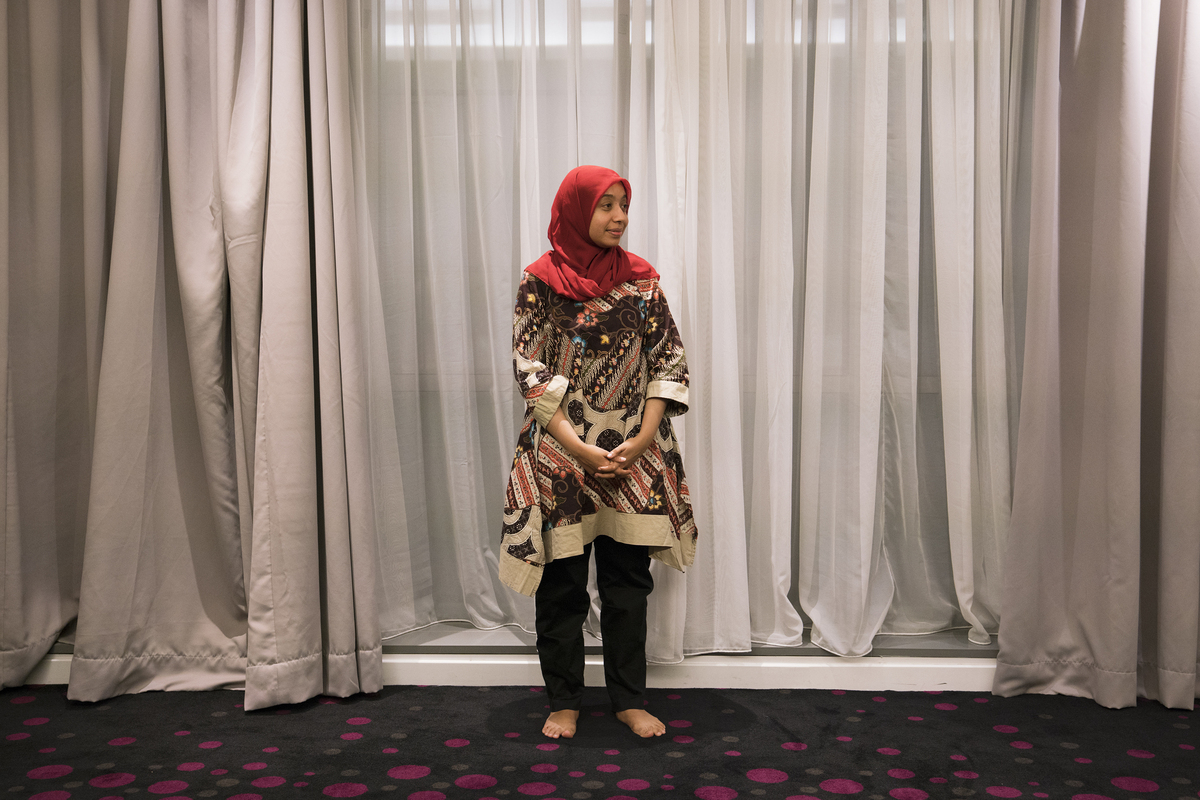 Sakdiyah Ma'ruf is a comedian in Indonesia. Now she is breaking ground as a stand-up comedian who wears a hijab while openly mocking religious fundamentalists.

So how about a news quiz now? What is the world's third-largest democracy, the fourth-most-populous country in the world, a country with more Muslims than the entire Arab world combined? We are talking about Indonesia. And yet, what happens in Indonesia rarely makes headlines here in the U.S. That's one reason my colleague Ari Shapiro, host of All Things Considered on weekdays, recently spent some time reporting in Indonesia. His stories will air all this week. Today, Ari brings us a chat with a standup comedian who lives in Jakarta. Her name is Sakdiyah Ma'ruf.

ARI SHAPIRO, BYLINE: She was raised in a conservative Muslim family. She wears a headscarf. And she told me that she became interested in standup comedy by watching bootleg DVDs of, like, Roseanne Barr, Jerry Seinfeld, Bob Saget. And like so many of those comedians, her jokes are often about her own life.

SAKDIYAH MA'RUF: And now, I'm 34 - way past expiration date for men in my community. So I guess I'm stuck with continuing my education and having a career.

SHAPIRO: This is very unusual for Indonesia, and so I wanted to know how she found a career as a standup comedian. Here's our conversation.

MA'RUF: I discovered standup comedy, like, for real in 2009.

MA'RUF: I discovered this "Robin Williams: Live On Broadway" DVD. When I watched him do this live, it started to make sense.

SHAPIRO: And when you started to do it yourself, was there anyone in your life who said, this is not Halal, this is not appropriate?

MA'RUF: Well, you know, it's not that direct, but there are concerns. Many members of my extended family sort of state their concerns.

SHAPIRO: How do they express it?

MA'RUF: They said something like, are you speaking in public? And that's not appropriate. Isn't that a path that should not be taken by a Muslim woman? And my parents, of course, worry about the content.

MA'RUF: I'm very fortunate that my parents supported my education with so many condition that I wish I had a lawyer to help me negotiate.

MA'RUF: Most importantly, I am not supposed to know anyone from the opposite sex, let alone date them. In the past, I thought, wow, I didn't that my dad was such a great supporter of lesbianism.

SHAPIRO: What's your process for coming up with and trying out new material and seeing if it works?

MA'RUF: I do not have a luxury to go out every night at open mics events and testing materials. I'm struggling with curfew, of course. And, yes, I have to hide the fact that I appear on national television.

SHAPIRO: How did you hide from them the fact that you were on national TV?

SHAPIRO: And how did you hide that from parents?

MA'RUF: Well, basically, buying all of the newspaper in the neighborhood.

SHAPIRO: You just, like, went from newsstand to newsstand buying every copy of the Sunday papers?

SHAPIRO: Did you eventually show your parents?

MA'RUF: Well, I took advantage because it's an English newspaper. And so I took advantage of just - what did it say? And then, I can say whatever it is that I'm feeling to say - something that is...

SHAPIRO: Just make it up.

MA'RUF: The wait is finally over. Nike will launch Nike pro-hijab, proven to be super comfortable for Muslim female athletes and those running away from oppressive regime and/or husband.

SHAPIRO: Do you think there's anybody in your mother's or your grandmother's generation who sees what you're doing and says, I wish I could have done that?

MA'RUF: Well, my mom used to be an actress before she got married to my dad. And I'm feeling very fortunate to be able to reconnect this missing link in the family - something that my mom would have done better or more professionally if context, culture, situations allowed. But something that she stopped doing, and I somehow got the opportunity to pick it up, connecting the missing links of this artistic talent and passion and this spirit to speak up in my family.

SHAPIRO: Well, Sakdiyah, it's been great talking with you. Thank you so much for joining us.

MA'RUF: Thank you so much.

SHAPIRO: That was my colleague Ari Shapiro, host of All Things Considered weekdays, interviewing comedian Sakdiyah Ma'ruf, a standup comedian who lives in Jakarta.

(SOUNDBITE OF LYN TAITT AND ROLAND ALPHONSO'S "STREAM OF LIFE")