Accessibility links
The Russia Investigations: Countdown To The Big Show; Republicans Strike Back D.C. laces up for a social media marathon in Congress, and an explosive Washington Post story helps the White House and GOP go on offense against Hillary Clinton. 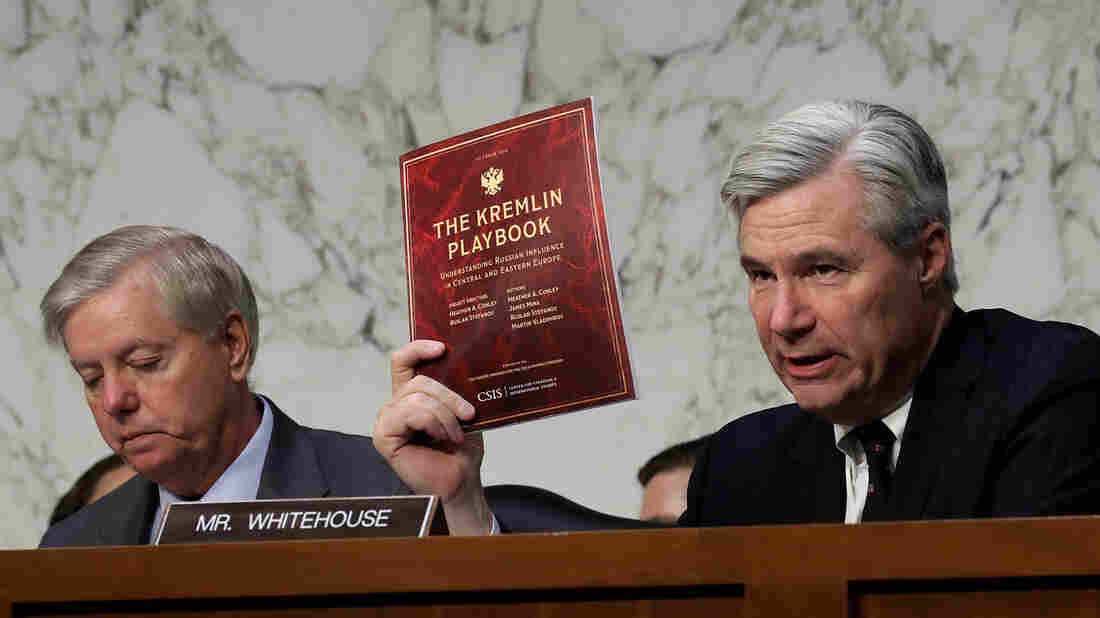 Senate Judiciary Committee member Sheldon Whitehouse, D-R.I., holds up a copy of The Kremlin Playbook while delivering remarks with Sen. Lindsey Graham, R-S.C., at the conclusion of a May 8 subcommittee hearing on Russian interference in the 2016 election. Chip Somodevilla/Getty Images hide caption 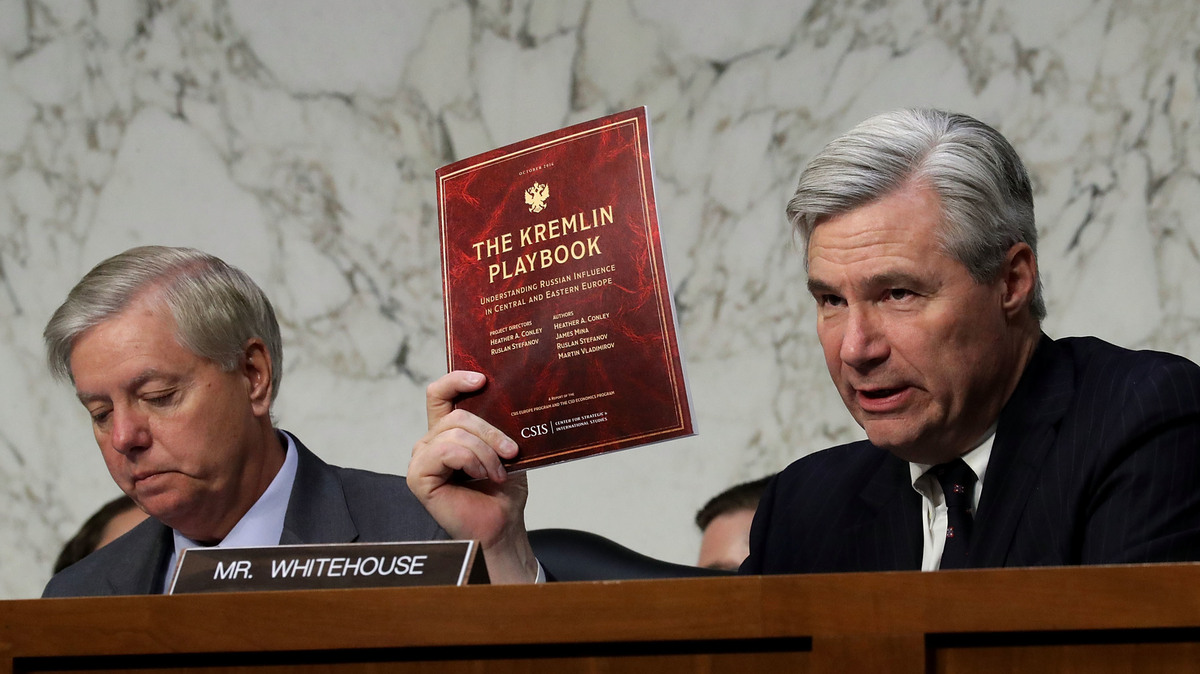 Senate Judiciary Committee member Sheldon Whitehouse, D-R.I., holds up a copy of The Kremlin Playbook while delivering remarks with Sen. Lindsey Graham, R-S.C., at the conclusion of a May 8 subcommittee hearing on Russian interference in the 2016 election.

Last week in the Russia investigations: Washington, D.C., gears up for the big show; Trump campaign data firm's guru tried to link up with WikiLeaks; and Clinton, DNC helped pay for infamous dossier on Trump.

Get Ready For The Big Show

After weeks of buildups, letdowns, surprises, scoops and headlines, this is it: Three central players in the world of Big Tech are set to face off across the witness table this week from members of Congress.

The circus comes to town on Tuesday afternoon with a late-addition, thunder-stealing session scheduled by a subcommittee of the Senate Judiciary Committee. The chairman, Lindsey Graham, R-S.C., jumped ahead of two long-scheduled hearings on Wednesday in the Senate and then House Intelligence committees.

(This isn't the first time these panels have tangled over the Russia imbroglio. The ostensibly more prestigious, senior Senate Judiciary Committee resents the comparative upstart Senate Intelligence Committee — but lacks the intelligence panel's direct oversight of spy agencies and its access to superprimo national security secrets.)

Anyway, lawmakers — especially Senate Intelligence Committee Vice Chairman Mark Warner, D-Va. — have been talking this up for a long time. But don't expect the hearings to match the spectacle offered in June by former FBI Director James Comey.

Instead, the representatives of Google, Facebook and Twitter — men whose faces you don't recognize, with names you don't know — are expected to try as hard as they can to be boring.

They don't want histrionics. They don't want to be ensnared into soundbites. They want to comply with their invitations to appear, restate their earnest commitment to playing ball and then get safely back over the battlements into Silicon Valley.

What Is To Be Done

That Russian influencemongers used Facebook, Google, Twitter and other online platforms in the overt part of their attack on the 2016 U.S. election is not in dispute.

Each company has acknowledged selling ads to Russian-linked buyers or, in the case of Facebook and Twitter, the presence of fake or automated accounts that wreaked all kinds of interference within the U.S. What is in dispute is what action to take now.

Warner, Sen. Amy Klobuchar, D-Minn., and Sen. John McCain, R-Ariz., have a bill that would mandate disclosure about online political ads. But Facebook and Twitter say they're already planning to take industry-leading new steps on transparency.

The hearing on Wednesday could provide new indications about how strongly each side of this — Congress on the one and Big Tech on the other — feels about the cards it is holding.

Lawyer Conferred With Kremlin Ahead of Trump Tower Meet

One of the Russians who met with Donald Trump Jr. and other campaign bigwigs in Trump Tower last year conferred beforehand with Russia's top federal prosecutor, Sharon LaFraniere and Andrew E. Kramer report in The New York Times.

You haven't heard Natalia Veselnitskaya's name for a while, but she was part of a delegation that visited New York after Trump Jr. received an email that described an offer of help from the Russian prosecutor, Yuri Chaika. And, in fact, Veselnitskaya consulted with Chaika, the Times confirms:

"The coordination between the Trump Tower visitor and the Russian prosecutor general undercuts Ms. Veselnitskaya's account that she was a purely independent actor when she sat down with Donald Trump Jr., Jared Kushner, the president's son-in-law, and Paul J. Manafort, then the Trump campaign chairman.

It also suggests that emails from an intermediary to the younger Mr. Trump promising that Ms. Veselnitskaya would arrive with information from Russian prosecutors were rooted at least partly in fact — not mere 'puffery,' as the president's son later said."

The boss of a data analytics shop used by the Trump campaign last year emailed WikiLeaks founder Julian Assange to ask him to collaborate on releasing the emails Hillary Clinton deleted from her private server, Betsy Woodruff reports in The Daily Beast.

Alexander Nix, who runs the analytics company that helped with the Trump campaign's pioneering digital operation, pinged Assange to ask how Nix could somehow help WikiLeaks release the Clinton emails.

Assange later confirmed the contact took place but said they did not work together. 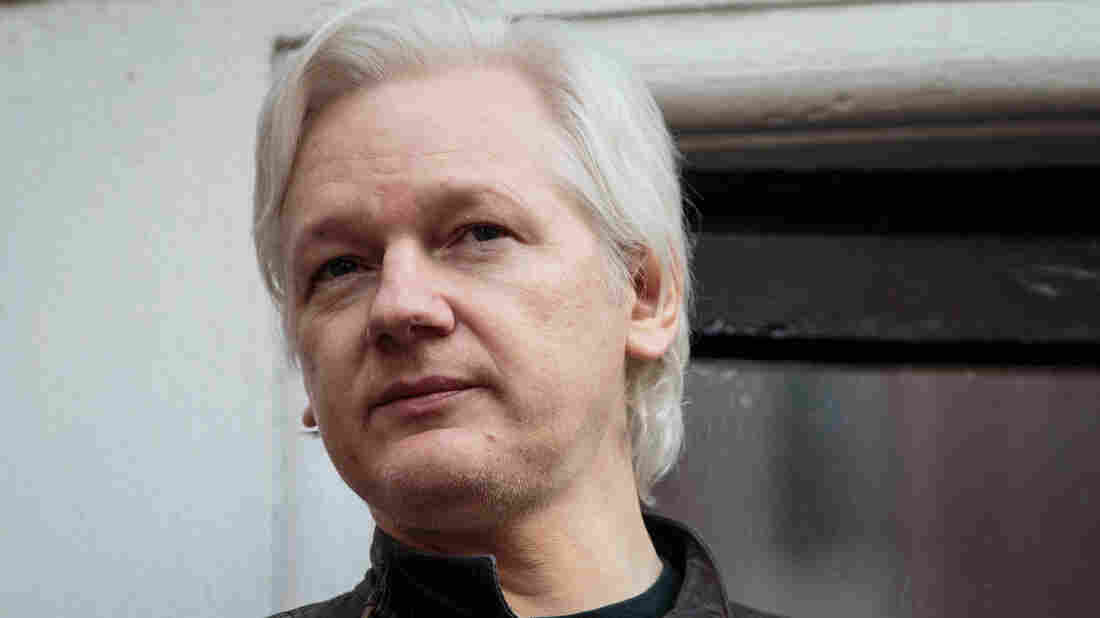 WikiLeaks founder Julian Assange speaks to the media from the balcony of the Embassy Of Ecuador in London on May 19. Jack Taylor/Getty Images hide caption 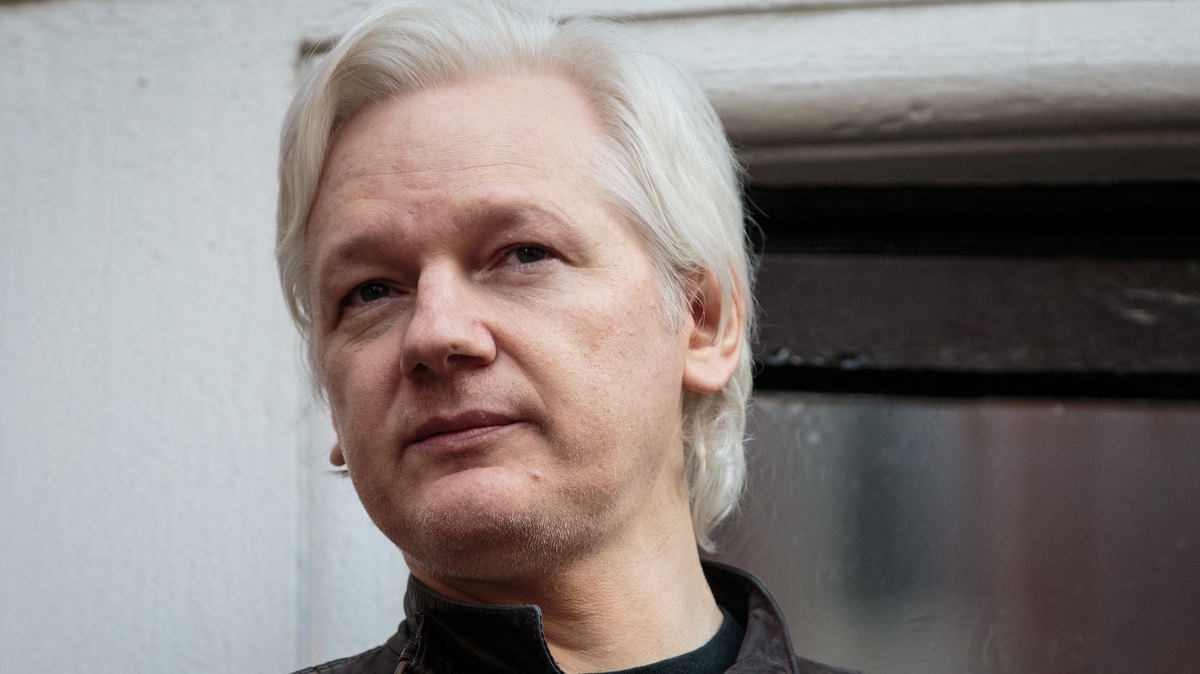 WikiLeaks founder Julian Assange speaks to the media from the balcony of the Embassy Of Ecuador in London on May 19.

The story is significant because it confirms direct contact between people in the Trump orbit and WikiLeaks. Trump adviser Roger Stone says he talked with Assange via an "intermediary," whom he won't identify. And it's at least the second example of people working behind the scenes on projects involving the elusive Clinton emails.

Earlier, the Wall Street Journal reported that a Republican operative contacted a British cyber expert to ask him for help in verifying an offer of the Clinton emails from "the Dark Web." The emails have never emerged, but the latest developments revive the question about whether they might, in fact, be out there somewhere, in the hands of Russia's GRU intelligence agency or elsewhere.

The U.S. intelligence community loathes WikiLeaks; CIA Director Mike Pompeo has said it amounts to a hostile foreign intelligence service. Trump, as a candidate, said he loved WikiLeaks because it had released so many embarrassing secrets about Hillary Clinton, her campaign chairman John Podesta, the Democratic National Committee and other Trump foes.

That material was pilfered by Russian government hackers and then fenced through WikiLeaks and other websites as part of the clandestine side of the Russian influence campaign against the United States in the last presidential election cycle. Amid all the ongoing talk about the overt side involving social networks, it's important not to lose sight of both sides of the coin.

Everybody knew in general terms that Democrats had paid for the infamous, unverified Trump-Russia dossier after taking it over from a Republican primary challenger to Donald Trump. Now, however, Adam Entous, Devlin Barrett and Rosalind S. Helderman of The Washington Post have filled in some of the details — and their story has flipped the politics of the Russia imbroglio upside down.

The Post correspondents confirmed the details of payments for the dossier by Clinton's campaign, and, in so doing, have created a potent new weapon for the White House and Republicans. This whole thing is an outrageous political hatchet job, says the president and his allies, they can argue. If this is supposed to be the case that Trump colluded with Russia in 2016 — there is no case!

The dossier, which NPR has not detailed because it remains unverified, was not the basis for the intelligence community's report about Russia's attack on the 2016 election, nor is it connected with the in-person meetings between people in Trump world and Russians, etc. There is much more to the Russia imbroglio.

The Post's report enticed Trump and allies to take the offense, and it landed at a propitious time for Republicans. Also last week, the leaders of the House Judiciary, Oversight and Intelligence committees said they were launching new investigations into Clinton and the practices of former President Barack Obama's administration, as NPR's Miles Parks reports.

As the week ended, the Washington Free Beacon, a conservative website, disclosed that it had retained the firm that produced the dossier. But it added that none of the work product it received appears in the dossier. The New York Times reported that "The Free Beacon told the firm to stop doing research on Mr. Trump in May 2016" and the Clinton campaign and the Democratic National Committee "had begun paying Fusion GPS in April for research that eventually became the basis for the dossier."