Accessibility links
Baltimore Police Overhaul Challenged By Murder Crisis Baltimore's stubbornly high murder rate is causing some residents to lose faith in efforts to change policing in the city. They say it has become an excuse for police inaction. 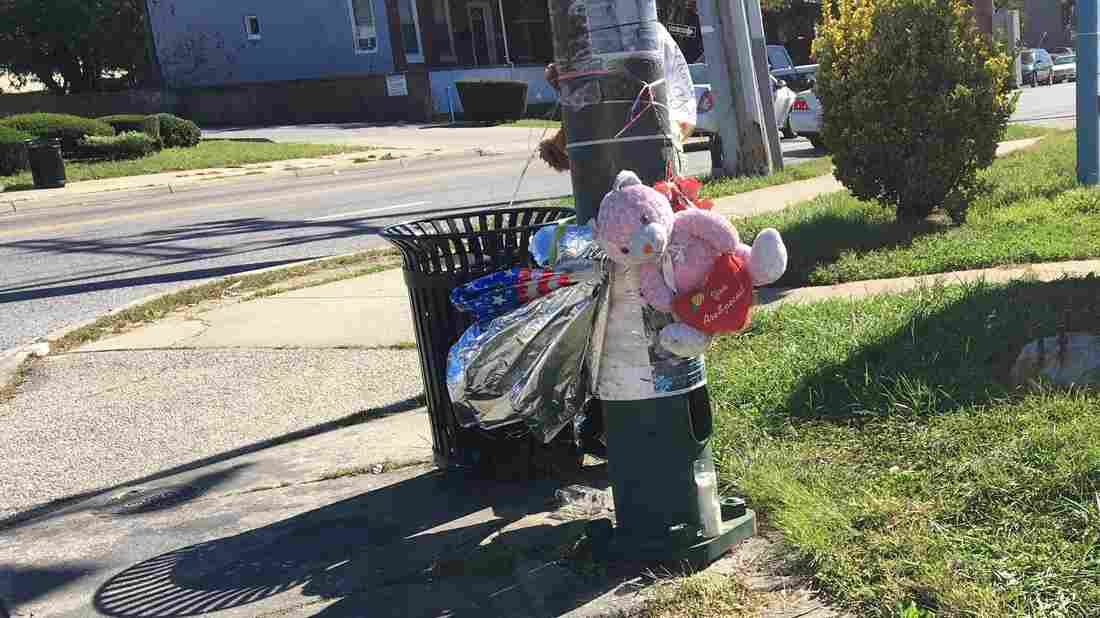 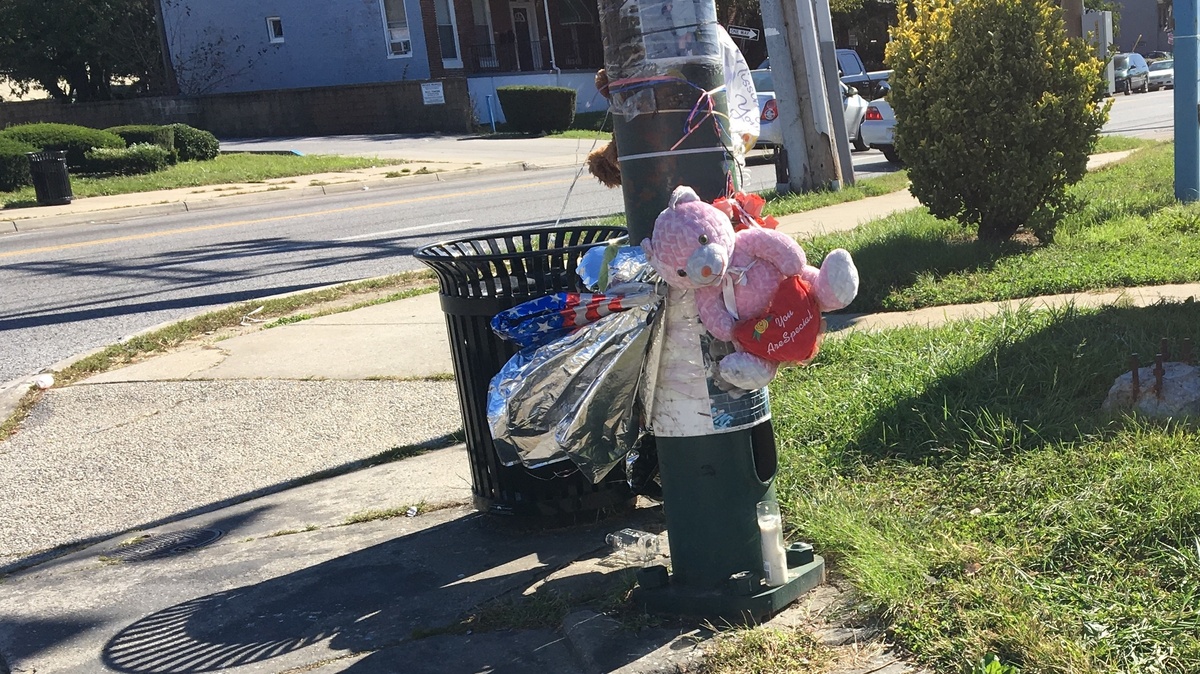 Memorials for murder victims have become common sights in some parts of Baltimore.

Baltimore is again closing in on 300 murders, a grim milestone that it's passed every year since the Freddie Gray riots in early 2015. The relentless carnage has the city on edge, and has undermined public confidence in the promise of a police overhaul.

"People are less concerned about police reform right now than they are about their own public safety," says Kinji Scott, a minister, community activist and opponent of current city leadership. Scott lives in Baltimore's northwestern district, and has seen multiple murders in his neighborhood, some within steps of the local police headquarters.

"It pisses me off when people keep talking about reform," he says. "We're talking about our safety and being able to walk out of our houses without being shot."

Scott is African-American, and believes in the broad goal of making policing more respectful and constitutional. But he objects to what he sees as the term "reform" being used an excuse for overly-cautious policing.

One example is the new reluctance by Baltimore police to "clear corners," that is, to disperse crowds from known trouble spots. After the Freddie Gray riots, an investigation by the Justice Department under President Obama found the practice to be one of several that potentially violated residents' civil rights.

Community activist Kinji Scott expresses frustration over what he sees as reform advocates' obsession with the death of Freddie Gray, and the ensuing riots in 2015. Note: This clip contains strong language.

Scott has made common cause on this issue with a former police officer, Anthony Barksdale, who was a deputy commissioner in charge of operations in the decade before the Freddie Gray incident. It was an era of falling crime rates, and Barksdale credits the more aggressive policing tactics of that time, including the clearing of corners. Now, when he drives around Baltimore, he seethes with frustration over what he perceives as police inaction.

"Look over there!" he says, pointing out a cluster of about 20 men on a street corner. "You got people who are selling drugs, and the cop is sitting right there — and they're sitting on the damned police car!"

Barksdale, who's also African-American, uses a term that's more often heard from conservative critics of the Black Lives Matter movement: "That's de-policing. This is what you're seeing — this is de-policing!" 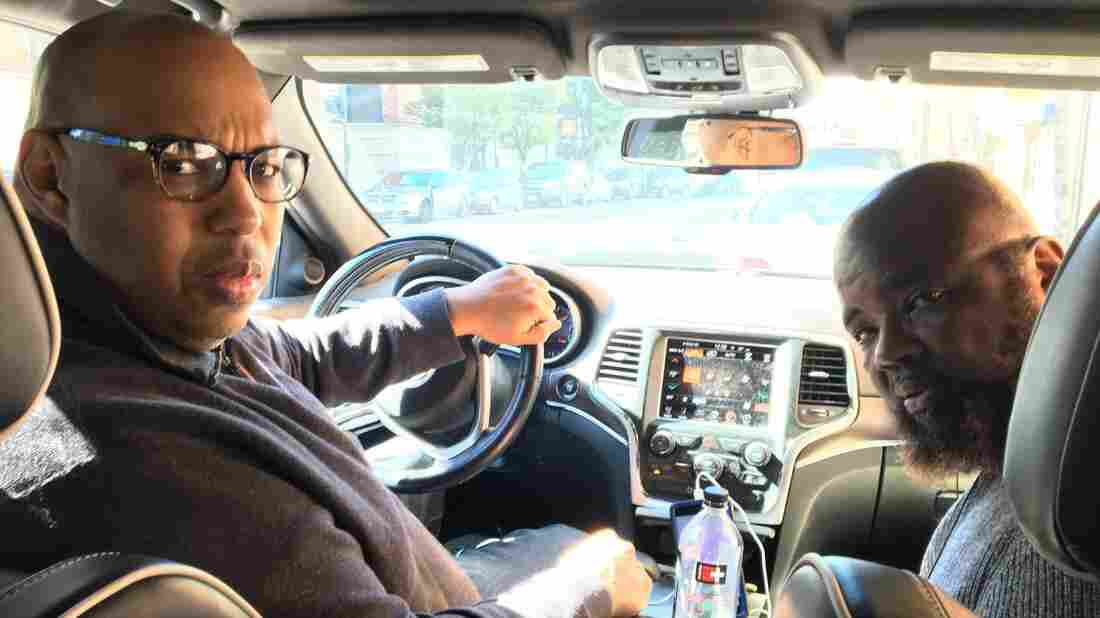 Anthony Barksdale, left, and Kinji Scott say the police department is discouraging police from using tactics that have been effective in the past, opening the door for the last three years' surge in murders. Martin Kaste/NPR hide caption 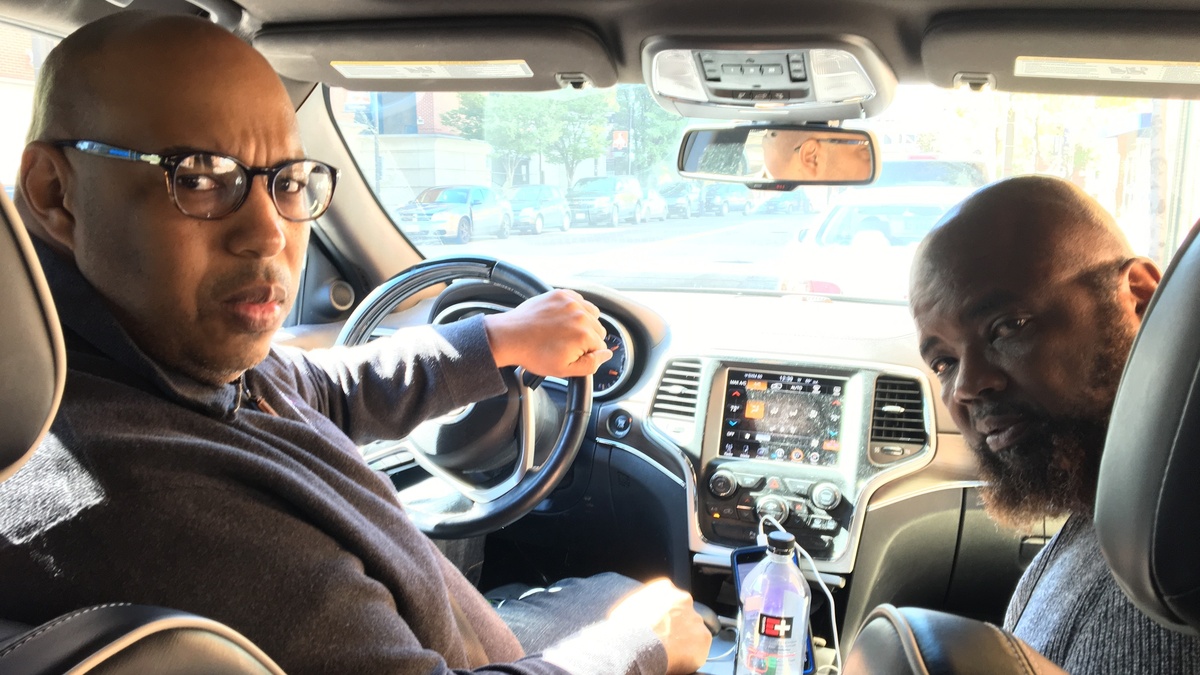 Anthony Barksdale, left, and Kinji Scott say the police department is discouraging police from using tactics that have been effective in the past, opening the door for the last three years' surge in murders.

"I've heard those sentiments out there, particularly from the peanut galleries of the world," Davis says.

Davis, who is white, was hired after the Freddie Gray riots and is now charged with implementing a federal consent decree, which the city negotiated with the Justice Department in the last days of the Obama administration. He says the department is now committed to a new, "holistic" style of policing.

"This profession can no longer occupy geographies with cops and stop everyone who moves in hopes of catching a few bad guys," Davis says.

It's a challenging time for a project like this. The Baltimore city police department is already dealing with continuing resentment from rank-and-file cops, who suspect political motives were behind the failed prosecution of six officers linked to Freddie Gray's in-custody death in 2015. Davis has also had to cope with the repercussions from a scandal involving members of a police task force who've been charged with stealing overtime pay and even robbing civilians.

Of all the challenges facing Davis's effort to revamp his department, the continuing high murder rate may be the most serious. He says he knows big-city police departments are judged by the murder rate, but he says there are other aspects to good policing.

As signs of progress, he points to the lower number of shootings by police, and the decrease in complaints about excessive force. 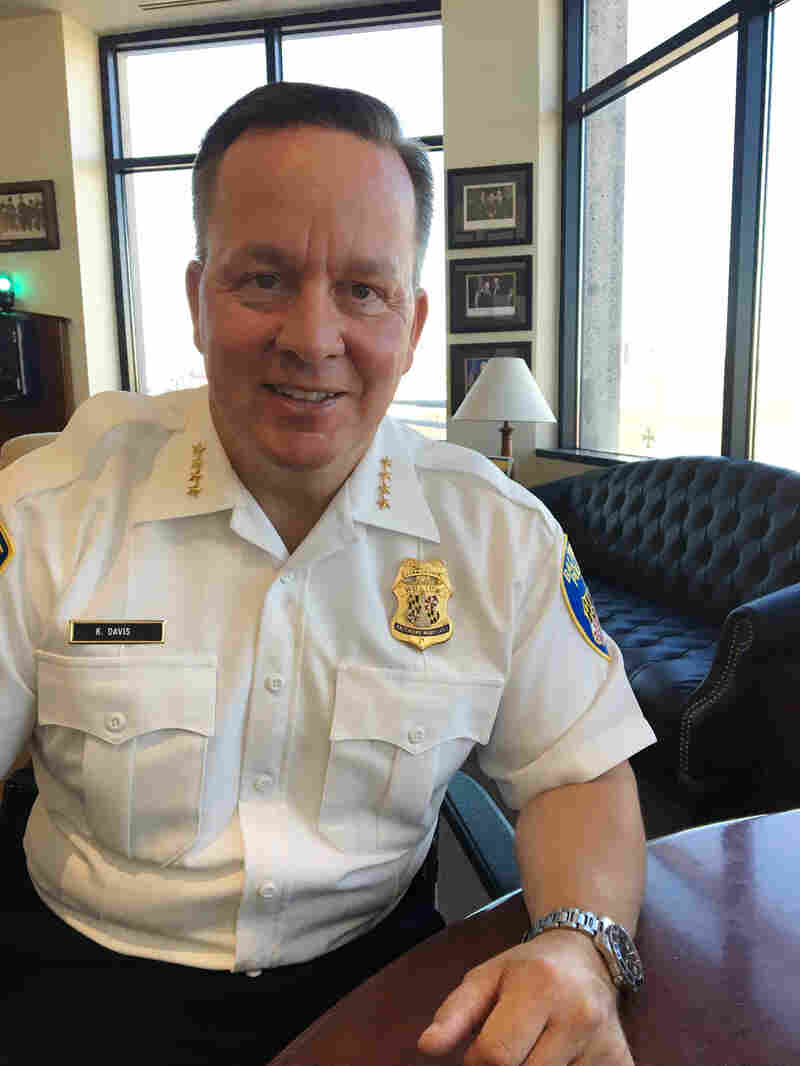 Baltimore City Police Commissioner Kevin Davis says he knows big-city police departments are judged by the murder rate, but there are other aspects to good policing. Martin Kaste/NPR hide caption 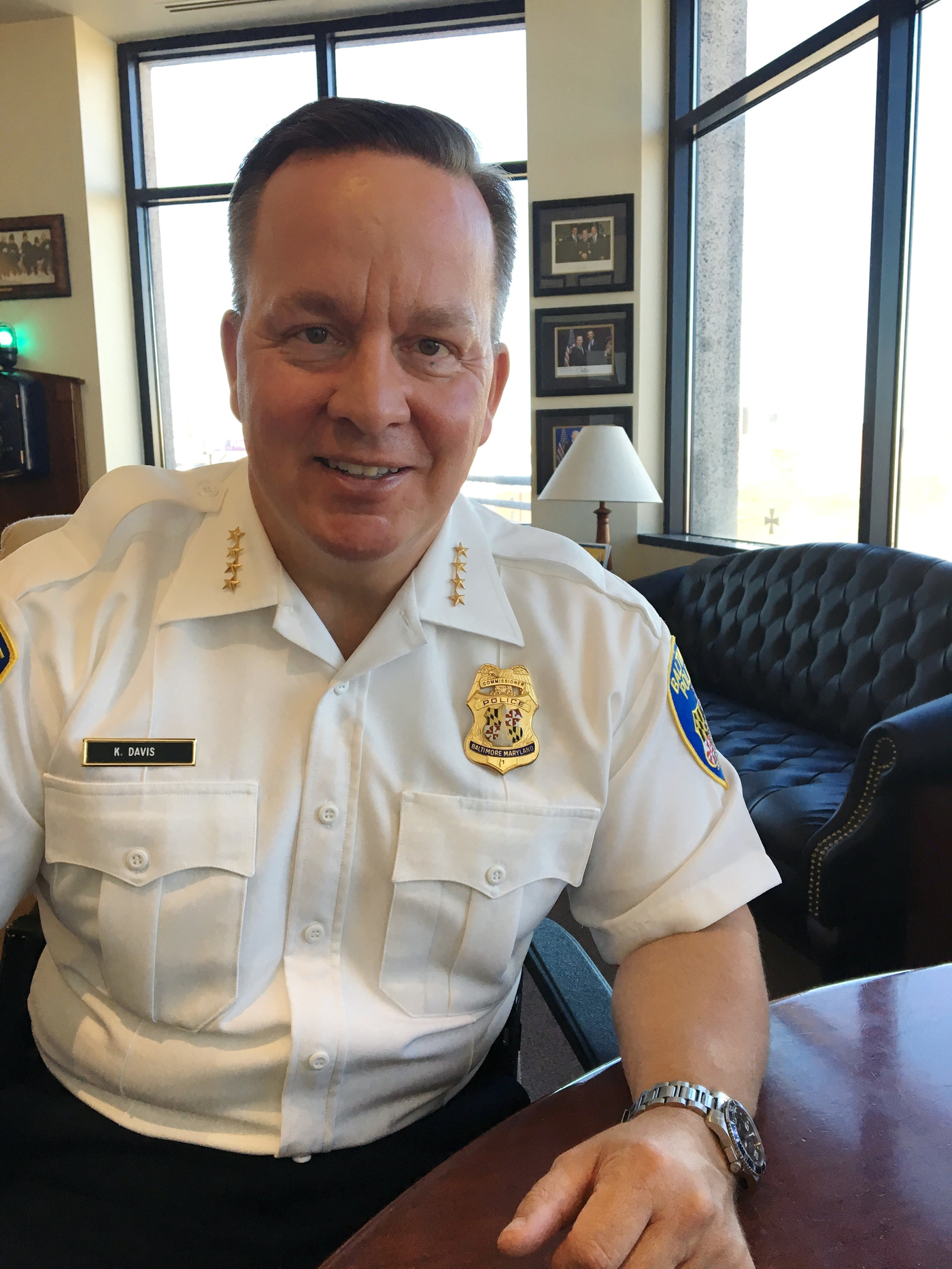 Baltimore City Police Commissioner Kevin Davis says he knows big-city police departments are judged by the murder rate, but there are other aspects to good policing.

Ali says police reform remains a priority for his majority-black district, but pressure is growing.

"I think a lot of people are tense," Ali says. "We have a community that has been traumatized. If you go through our city, you probably can't go five blocks without seeing balloons that are attached to a light pole. And they're not for celebrations — they're there because someone lost his life."

But Ali still supports the police department's move away from what some have called the "zero tolerance" policies that pushed down violence rates in the years before the Freddie Gray incident.

"I think [my constituents] want constitutional policing," Ali says. "Don't go outside of the law, and target and profile people. A lot of those people may be on the corner because that's their neighborhood!"

But when you talk to people who live in or near the city's murder hot-spots, you also hear a certain nostalgia for old-fashioned corner-clearing. Sean Shuler, also in the nortwestern district, says crowds used to disperse as soon as a cop rolled up.

"When they saw the police it was just, OK it's time to leave. You know, when he pulled up, you know, he shook his head, you already know, you had to leave," Shuler says. "Now, it's like, they pull up and you still got 20 people sitting there."

And what does he think of that change?

"It's bad! Because if you're letting all these guys stand around that means more things is gonna happen. As soon as the officer's gonna pull off, there's gonna be a shooting."

The debate over police reform and "de-policing" often comes down to arguments over specific tactics in specific places. Most people in law enforcement agree on the long-term goals: policing should be respectful and constitutional. The question, says Peter Moskos of the John Jay College of Criminal Justice, is the short-term.

"We have this problem right now that in certain neighborhoods of Baltimore, like the western district, at current levels of violence, 20 percent of men will be murdered in their lifetime," Moskos says.

"In the short-term... if an intelligent, and more pro-active, and somewhat more aggressive — legal and constitutionally aggressive — form of policing can cut violence in half, we need to put that option on the table."