Accessibility links
Christian Writer Banned From Liberty University Campus After Criticizing Trump Ally The Christian university says it welcomes "peaceful debate" and that Jonathan Martin was removed because officials believed he intended to hold an unauthorized event on campus. 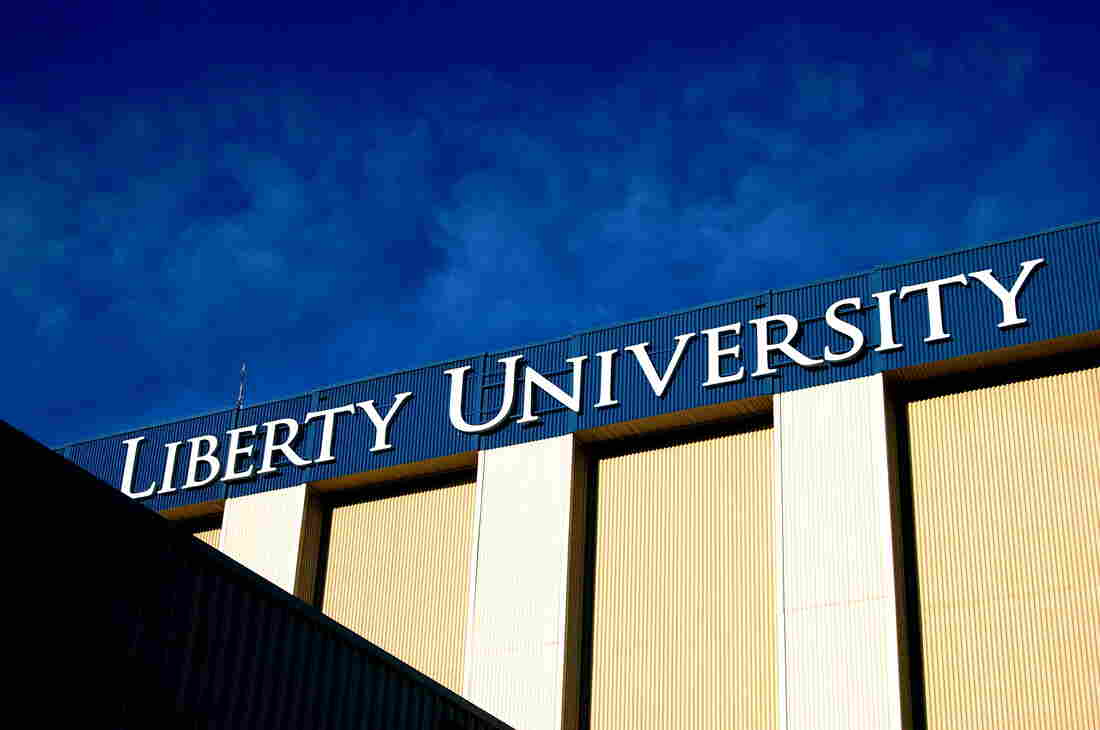 The writer, Jonathan Martin, said in a Twitter thread that he was on the campus of Liberty, a private Christian college in Lynchburg, Va., Monday night for a concert by the duo Johnnyswim when he was escorted away by armed campus police.

Tonight after the @JOHNNYSWIM show, 3 armed @LibertyU police officers (& I think 2 not in uniform)came & escorted me out of their green room pic.twitter.com/eigyE1LjaG

Martin said he was photographed and told by Liberty police that he'd be "immediately arrested if I ever stepped foot on @LibertyU property again." On Twitter and his blog, Martin has been a frequent critic of Falwell and Trump, particularly Falwell's "alignment" with Steve Bannon and the movement known as the alt-right, which includes white nationalist and white supremacist groups.

In a lengthy statement, Liberty University said the university welcomes "peaceful debate," and that Martin was removed because officials believed he intended to hold an unauthorized event on campus. The statement said he did not follow protocols for campus events, that such events require advance notice and authorization and that he was seeking publicity.

Earlier Monday evening, Martin had announced his intention to hold a prayer meeting the next morning on the Liberty campus.

This was evidently in response to my strong criticism of @JerryFallwellJr's alignment not only with the darkest contours of Trumpism, but

That statement followed multiple previous tweets in recent days, where Martin had talked about holding a "peaceful action" on campus to respond to Falwell. He said he had been "overwhelmed" by the interest.

expressly with Steve Bannon & the alt-right he represents. I came to the show tonight as guests of @JOHNNYSWIM & @amandasuramirez.

The statement from Liberty also expressed concerns about campus safety:

"Members of the Liberty University community are always welcome to engage in peaceful debate, intellectual inquiry and protest, but for public safety reasons, organized events by outside groups require advance notice and participating in the appropriate application process. Liberty University learned via social media of an attempt by Jonathan Martin to schedule an event on its private campus without any prior authorization or consultation. Mr. Martin is not a student, faculty member or employee of Liberty University. There are facility use protocols for those who are not members of the University community to schedule events on the campus. Those protocols take into account safety and security, as well as schedule conflicts and costs. Absent such pre-planning and authorization, an event promoted to the general public on social media has the potential to be a security risk. Given the late hour of the notice, the only effective way to prevent the unauthorized event from happening this morning was to issue a trespass warning to its organizer, Mr. Martin, last evening. This was done in a professional and matter of fact manner by Liberty University Police Department.

It may be possible that Jonathan Martin knew his unauthorized event would ultimately not be permitted to occur on the private property of Liberty University but he simply hoped to garner more attention to his cause by having his efforts stopped. So be it. The judgment was made that it was safer to stop the event before it started than to attempt to turn away an unknown number of people who traveled to Liberty's campus. Either option likely gives Mr. Martin's cause the publicity he apparently seeks. The University cannot be concerned with whether its actions provide additional oxygen to either side of a debate but rather must be concerned about safety and security of its campus."

In an interview with NPR, Martin said he sees his removal from campus as a response to his criticism of Falwell. Martin said he met off campus with about 20 students on Tuesday morning, and is making plans to host an off-campus demonstration in the coming months.

"If the desire of the Falwell administration was to somehow quash me and my involvement with the students, this just backfired in a severe way," Martin said. "Because to me it only underscores how urgent this work is, and how long-term it's gonna be."

Martin, who describes himself as an evangelical, said he believes Falwell is "uniquely complicit" in aligning evangelical Christianity with ideologies like white nationalism through his support for Trump and Bannon. He said he was particularly distressed by Trump's equivocal response to the recent violence in Charlottesville, Va., during a neo-Nazi rally.

"It often feels to me like a whole new religion," he said. "... It seems like with Falwell there's no boundaries."

Falwell was one of the first prominent evangelical leaders to support Trump's candidacy during the 2016 Republican primary. He's urged evangelicals to look beyond Trump's history of multiple marriages and vulgar language – including a 2005 recording where he brags about touching women's genitals without consent. In an interview with NPR in May, Falwell said no leader is without flaws.

"Because the ones that you think are so perfect and sinless, it's just you don't know about it," Falwell said. "They're all just as bad. We all are, and that's the bottom line."

Some Liberty students and alumni have followed Falwell's lead; but others have complained about the university's association with Trump, who has campaigned on campus and who delivered his first commencement speech as president there in 2017.

Falwell has said repeatedly that he supports Trump as an individual, and not on behalf of the university which his father founded and he now leads. But dissent can come at a cost; a prominent member of the university board of trustees, Mark DeMoss, resigned from the board last year after publicly disagreeing with Falwell's endorsement.

In August, a group of Liberty alumni – including a former Student Government Association president – announced an effort to return diplomas to the institution in protest of Falwell's continued support for Trump. In an interview with Fox News, Falwell dismissed the effort as "grandstanding." The university released a statement expressing support for former students' right to protest, adding, "let's also remember that those same diplomas are quite helpful in helping these graduates secure well-paying jobs."