Accessibility links
Female Inmates In Indiana Pitch Plan To Rehab Empty Houses — And Their Lives To curb recidivism, a small group of female prisoners in Indiana crafted their own re-entry plan: Rebuild abandoned houses in the city and create future homes for themselves in the process. 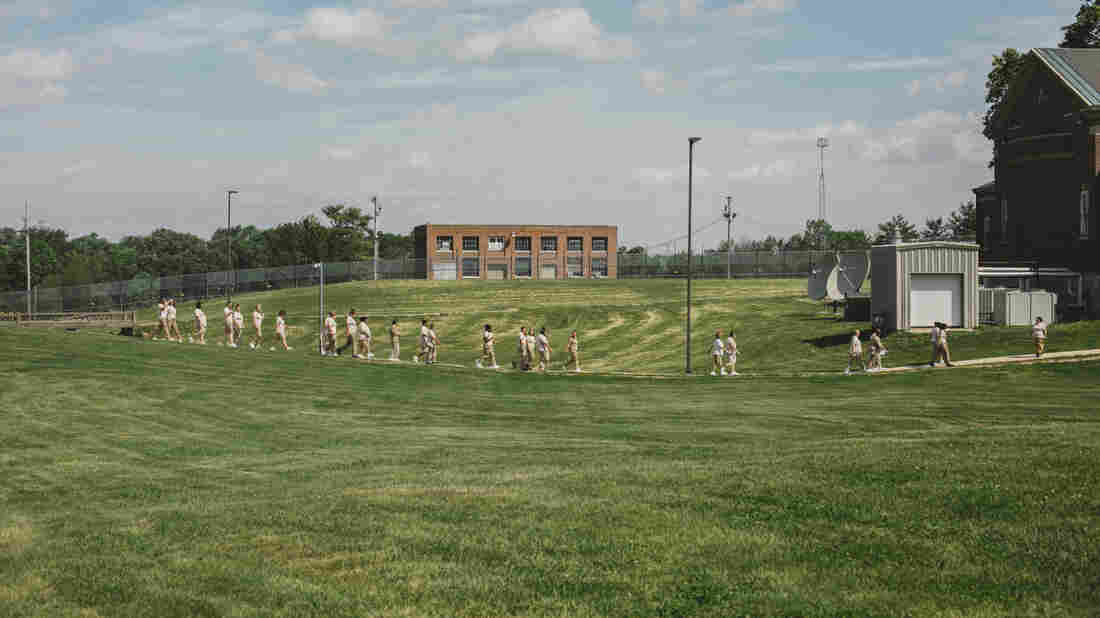 Women walk through the courtyard to lunch at the Indiana Women's Prison in Indianapolis on May 17. Andrew Spear for The Marshall Project hide caption 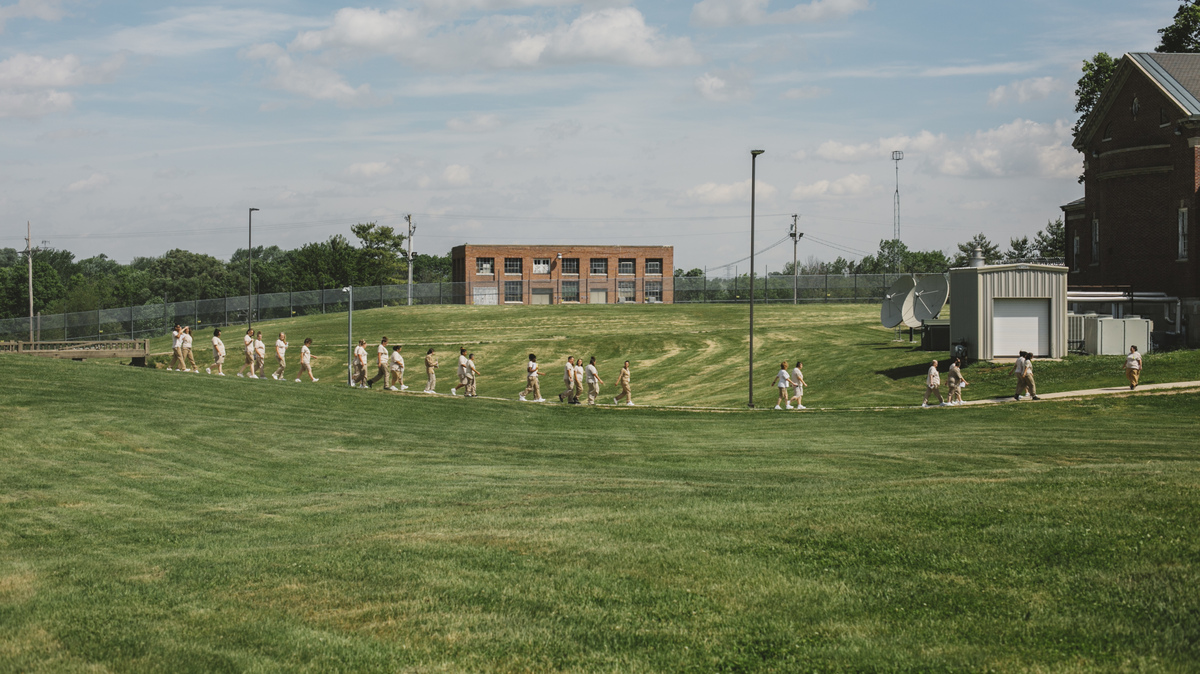 Women walk through the courtyard to lunch at the Indiana Women's Prison in Indianapolis on May 17.

This story was reported and published in partnership between WFYI and The Marshall Project, a nonprofit news organization covering the U.S. criminal justice system.

At the oldest prison in the U.S., on the west side of Indianapolis, Vanessa Thompson sat on a bunk in her cell, watching television. It was early 2015, the 17th year of her incarceration.

On TV, then-mayoral candidate Joe Hogsett was talking about a stubborn Indianapolis problem: 10,000 abandoned houses and lots, a remnant of factory closures and the mortgage crisis. Suddenly, Thompson had an idea, a way to redeem all those valueless homes while opening a door for prisoners just like her.

Born in Georgia and raised in Louisiana in what she said was a sexually abusive household, Thompson quit school at age 13 and was placed in foster care the same year. She began running away and became addicted to drugs for the next decade, she said. In 1998, she was implicated along with two others in the murder of a 16-year-old in a crack cocaine-related dispute; she was convicted two years later. She has maintained her innocence, arguing in appeals that prosecutors withheld evidence and witness testimony was tainted.

During her first several years at Indiana Women's Prison, Thompson piled up more than two dozen misconduct tickets for disrupting the prisoner count, arguing with staff, selling her psych meds, and abusing Benadryl and cough syrup from the commissary. Underneath all that chaos, she felt a deep shame for letting down her two children, one of whom ended up in prison himself.

But as she matured and teachers recognized her strengths, Thompson steadied herself. By 2012, she was enrolled in the prison's higher education program, taking a special interest in one of the most popular courses offered: public policy.

The class of about a dozen women studied civic literacy — how to write policy proposals, contact elected representatives and talk to the media. Every session, they pored over the fine print of bills then under consideration by the Indiana state Legislature, especially those related to incarceration, drug addiction, domestic violence and sexual assault — the issues they knew best. They held mock committee meetings and looked for clauses they thought could be amended. 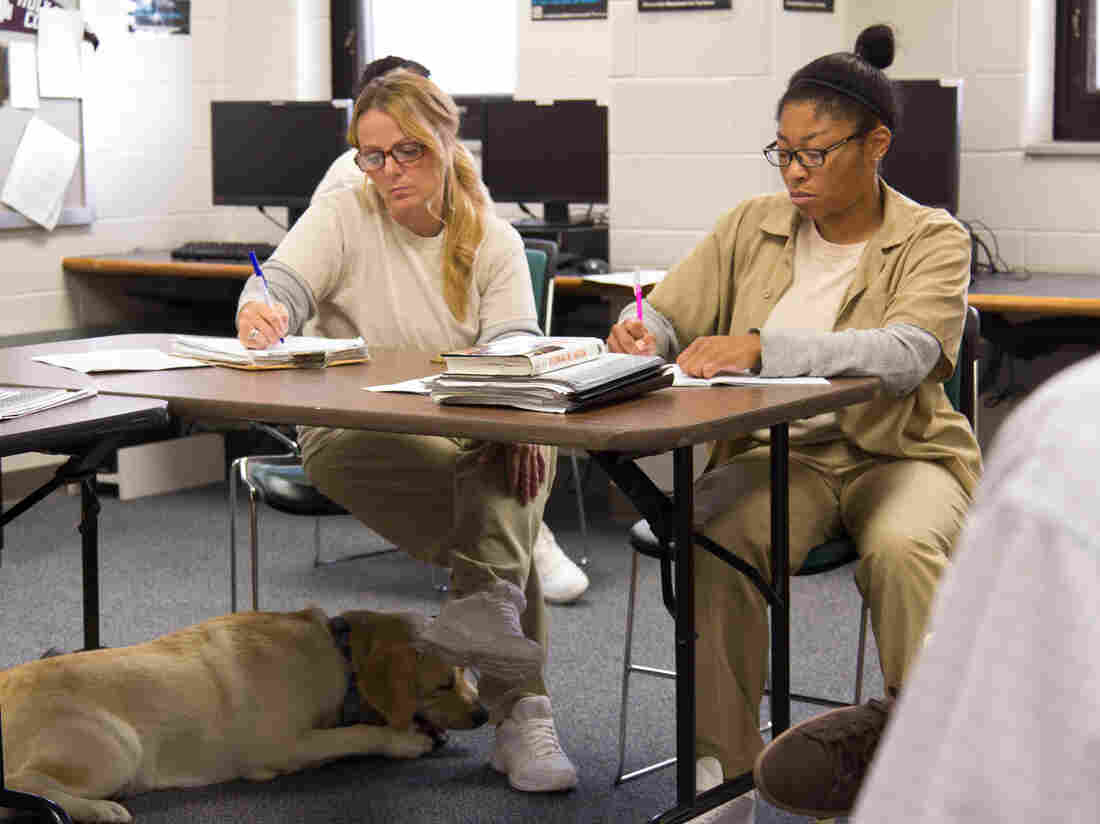 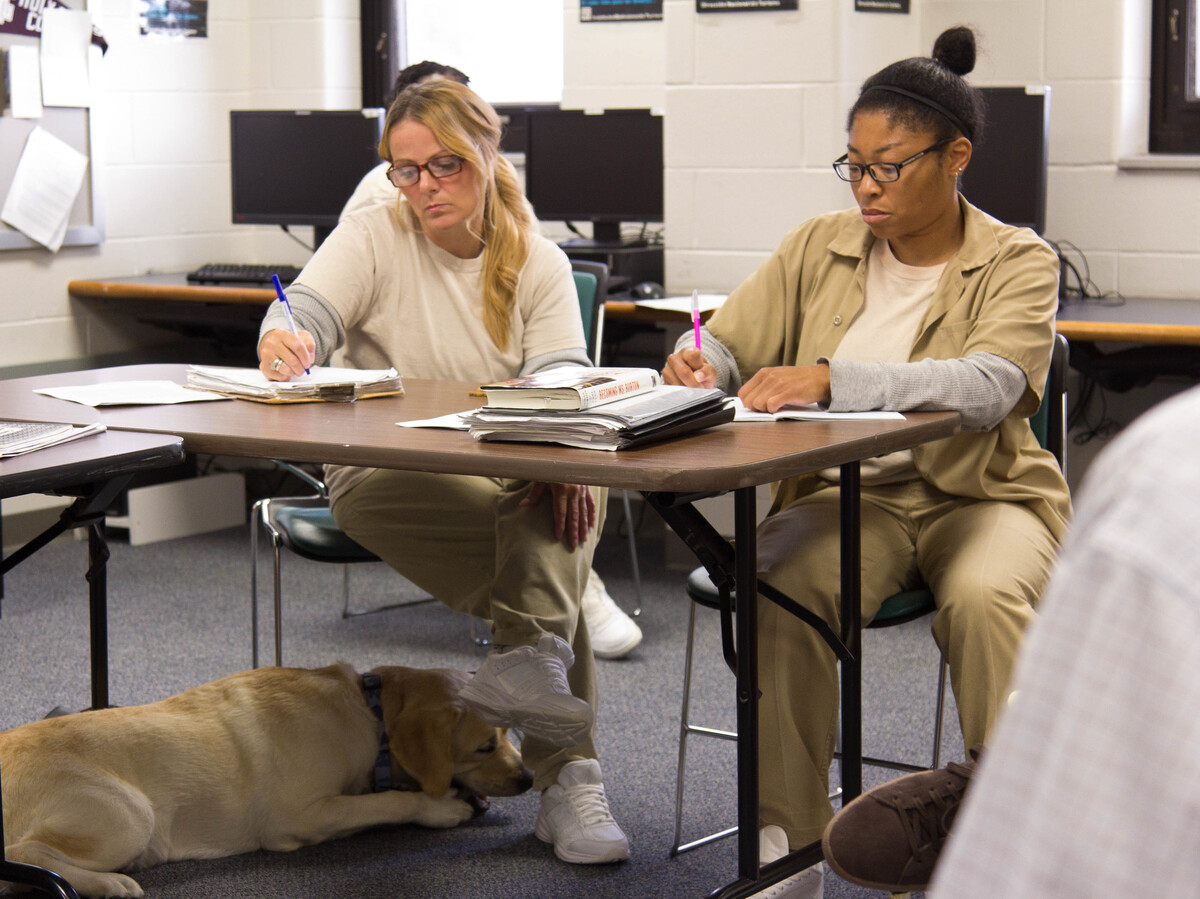 Vanessa Thompson (left) came up with an idea for rehabbing Indiana's abandoned homes that would also help felons re-entering society rebuild their lives.

Thompson began to see potential for reform all around her. In everything and everyone, there were possibilities for renovation, restoration and renewal.

So in 2015, when Hogsett — a Democrat who is now mayor — promised he would address the abandoned housing crisis in East Indianapolis, where many of her fellow inmates were from, Thompson was primed for her eureka moment.

What if, she thought, people re-entering society from prison helped rebuild those homes, and then, after putting in several thousand hours of construction work, got to live in one? This would also help solve a second intractable social problem: the lack of housing for ex-offenders, which had helped send so many women she knew back to jail.

"It's a double restoration — not just of the house but of the person," Thompson, now 44, said in a recent interview. "What does Indianapolis need? A solution to this housing crisis. What do women in prison need, more than anything? Ownership. Of our minds, of our bodies, and of our physical homes."

Thompson wrote up the proposal and brought it to class. The women dug into it earnestly.

It's a double restoration — not just of the house but of the person.

They found a textbook on low-income housing policy and divided up the chapters. They met or held video chats with Habitat for Humanity, YouthBuild, Yale Law School and local community development corporations to learn about sweat equity. At the chow hall, they joked about getting some pink hard hats to wear and debated what their prisoner-re-entry program would be called, settling on "Constructing Our Future."

A supporter set up a GoFundMe page, and the women wrote grant proposals to raise $200,000 for tools and equipment and to pay the salaries of a small program staff. They also recruited a complete executive board, including a state legislator and a top staffer at the Indianapolis mayor's office. They brought on an executive director, Andrew Falk, who formerly worked at the Indiana Attorney General's Office defending the state against prisoner appeals and now is a senior fellow at the Sagamore Institute, a public policy think tank.

In early April this year, four of the women — wearing their state-issue khaki uniforms, with their offender name tags around their necks and their nerves taut — presented videotaped testimony to the state legislature, describing their project. It was a rare, perhaps even unprecedented moment: prisoners advocating directly to lawmakers, and in a chamber recently deemed the most conservative in the nation.

In a unanimous resolution, the assembly approved the Constructing Our Future proposal. Thompson broke down after the announcement.

"I've been in prison for two decades," she said. "And I always thought, when's it gonna be they take me seriously?"

After Pell Grants for prisoners were slashed as part of the 1994 crime bill, Indiana was one of few states that continued to fund higher education in its correctional facilities. That continued until 2011, when the legislature cut financial aid for inmates altogether.

In Florida, Felons Want Voting Rights Back As Soon As They Complete Their Sentences

Since then, college-behind-bars programs in the state have relied on small, often for-profit schools to provide funding and accreditation, as is true around the country. But since those institutions struggle to generate revenue from incarcerated people, they often pull out from facilities entirely just when students have earned nearly enough credits for a degree, forcing many to start over from scratch.

Enter Kelsey Kauffman, a former volunteer teacher at the Indiana Women's Prison who in 2012 single-handedly created the program for Thompson and the others. "If it wasn't for her unbelievable personal will, it would not exist," said John Nally, director of education for the Indiana Department of Correction. The prison is the only maximum-security facility for women in the state.

Kauffman, 70 and a new grandmother, calls herself a "prison gadfly." She was one of the first women to graduate from Yale University — before promptly becoming a corrections officer. She said she became fascinated by incarceration after the 1971 revolt at Attica Correctional Facility in New York.

She has also written a book about the toll prison takes on the humanity of guards and inmates alike, and she became a national expert on white supremacist influences among corrections officers. Kauffman describes herself as politically radical but is highly practical in negotiating with prison officials and navigating byzantine rules to garner support. She has a fierce belief in the women's capacity to create, regardless of their crimes. 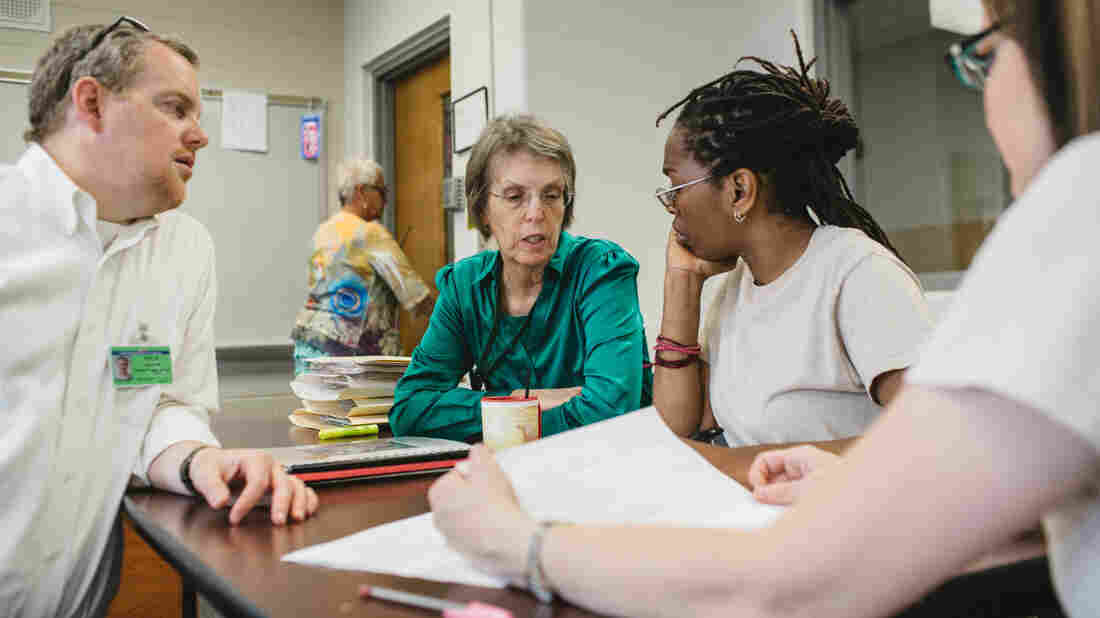 Andrew Falk (from left) works with former volunteer Kelsey Kauffman, Michelle Jones and Natalie Medley in the housing policy class at Indiana Women's Prison in Indianapolis on May 17. Andrew Spear for The Marshall Project hide caption 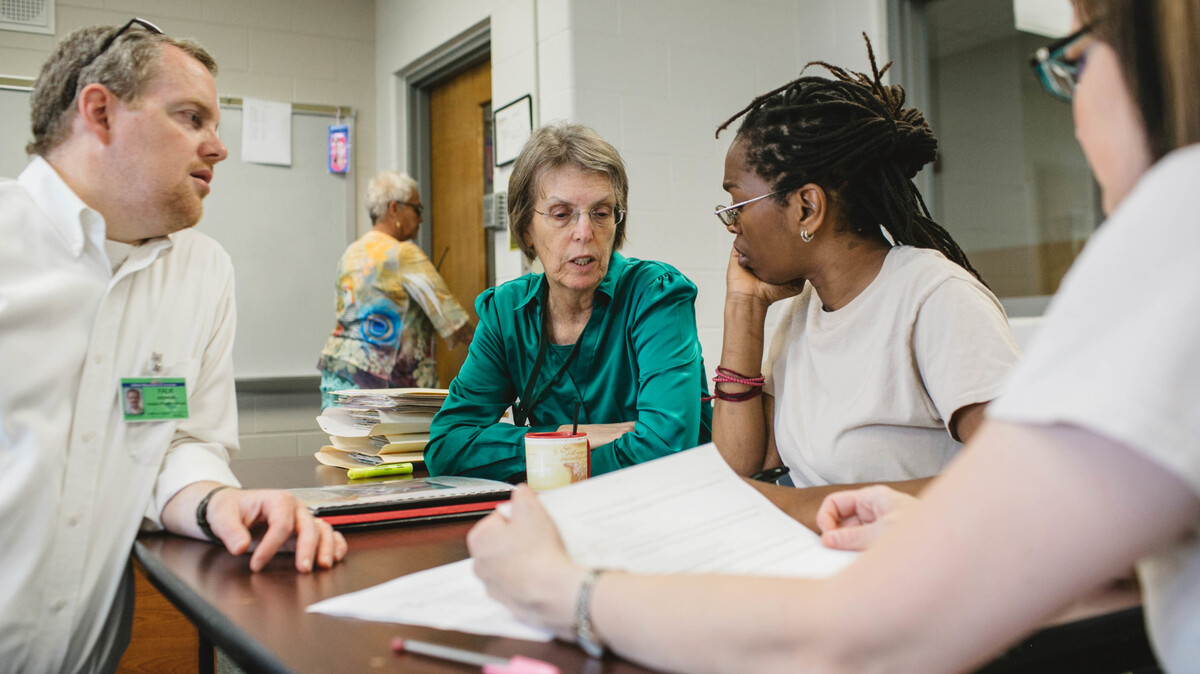 Andrew Falk (from left) works with former volunteer Kelsey Kauffman, Michelle Jones and Natalie Medley in the housing policy class at Indiana Women's Prison in Indianapolis on May 17.

"Women in prison aren't thought of as public policy experts," she said. "But who knows more than they do about key issues like domestic violence, inner-city 'food deserts,' and what it takes for a mother to survive with her children on the streets of Indianapolis after she is released from prison?"

As is often true of women in prison, nearly all of the Indiana Women's Prison students have been victims of sexual assault or domestic violence.

Because those crimes invite judgment, Kauffman preached the importance of appearance and speaking in slang-free English before the legislature. When looking for issues to bring to lawmakers' attention, she taught the students to "leave to the ACLU" more controversial topics such as solitary confinement, which could make them seem like self-interested activists rather than policy experts.

"I never would have known my power as a citizen... if I hadn't become a prisoner. Imagine that," said Kristina Byers-Escobedo, 39, who is serving a 30-year sentence on a child neglect conviction.

At a time when the incarceration of women, relative to men, is on the rise — and with about 75 percent of state prisoners getting rearrested within five years of their release — Thompson and the women at Indiana Women's Prison hope their new re-entry program can be a concrete and inexpensive national model for providing ex-offenders with both housing and a marketable skill.

But nothing is certain. Kauffman recently moved to California to be with her daughter, who is raising a new baby, but hopes the education program has been established long enough to carry on without her.

For Constructing Our Future to work, participants must first be allowed out on road crews and trained in construction skills in their final year of incarceration, which the Correction Department must fund and coordinate.

After the legislature's unanimous resolution this spring, Correction Commissioner Robert Carter wrote to the students and to Macer, the state representative, congratulating them for "thinking outside the four walls of the facility." But he noted that he could not guarantee their idea would be fully implemented as they proposed it.

The women are concerned that officials will implement it for the state's male inmates.

"Our labor is often discounted as women; if they give us vocational programs at all, it's always something like cosmetology instead of auto repair or forklift driving," said Toni Burns, 44, who is serving a 30-year sentence on an attempted murder conviction. "This may not be for us personally, but it has to be for women."

Meanwhile, they still need to find a home base for the program, envisioning a large apartment complex in East Indianapolis where participants would stay after being released from prison while completing their 5,000 hours of sweat equity. Their dream is for the state to hand over the old women's prison facility, recently shuttered.

"Most of us in here have low self-esteem, co-dependency issues, and struggle with being persistent and dependable," Thompson said, noting that she and others in the class may not benefit directly from the program because they are not due to be released for many years. "Half of our families have passed away while we've been inside... All the women [who] come here and live off of the state just go out and continue to do that."

But she hopes the program's strict admissions process and promise of a safe, affordable home for ex-offenders and their children will offer the chance of a better future.

"All the politicians are so concerned about what happens when us prisoners go home," said Thompson, whose own 18-year-old daughter was so moved by what her mom has accomplished that she plans to visit the prison in the coming months; when they last saw each other, she was 3. "Well, our question was: What's home? Let's try to answer that."