Accessibility links
'Full Frontal' Writer Ashley Nicole Black On Comedy's Cultural Divides Black was four years into a Ph.D. program when she decided to pursue a career in comedy. She's now a writer and correspondent on Full Frontal with Samantha Bee. 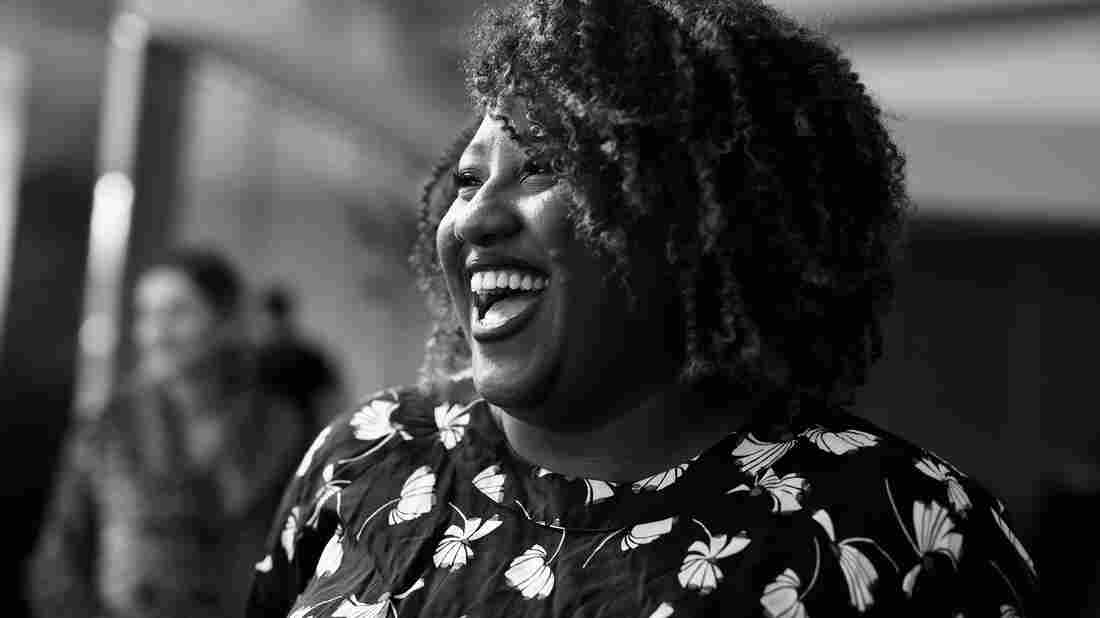 Ashley Nicole Black (pictured here in Los Angeles in May) is a writer and correspondent on TBS' Full Frontal with Samantha Bee. Emma McIntyre/Getty Images for TBS hide caption Ashley Nicole Black (pictured here in Los Angeles in May) is a writer and correspondent on TBS' Full Frontal with Samantha Bee.

Ashley Nicole Black was four years into a Ph.D. program at Northwestern University when she decided to drop everything and pursue a career in comedy. It was a risk, but it ended up paying off. She's now a writer and correspondent on TBS' Full Frontal with Samantha Bee.

Black honed her comedy skills in Chicago, but she tells NPR's It's Been A Minute that making it as a comic — let alone a comic of color — was tough in the Midwest. "It's like the best of times, worst of times kind of thing," she says.

She was hired as a writer on Full Frontal in 2016, after years of doing gigs and applying to jobs. Samantha Bee also made Black a correspondent on the show, which means she stars in the segments that she writes.

Earlier this year, the Full Frontal writing team won an Emmy for their special, Full Frontal With Samantha Bee Presents Not The White House Correspondents' Dinner. Black says the Emmy changed everything — for one week.

"I think most comedians join me in being anxious and having very low self-esteem. And so I learned that an Emmy buys you a week of self-esteem, and then your brain is like, 'We're done. You're garbage again!' "

I had started to do improv at that time, so I was, like, trying to live this crazy double life where I would do comedy shows at night and teach and do research during the day. But I just didn't enjoy it.

And I was doing sketch and I sort of found my voice in sketch, and realized that the same topics I was wrestling with in these super-academic papers that I was writing, I could write a five-minute sketch and people would actually want to hear it because it was fun and funny.

Samantha Bee On Trump's Win: 'I Could Feel This Seismic Shift'

On the ups and downs of learning comedy in Chicago

On the one hand, Chicago is the best place in the world to learn comedy. It is amazing because, one, when you're in Chicago, you're in this little bubble in the Midwest. So whatever mistakes you make — the accidental racist joke or whatever — there isn't like a casting director sitting in the audience when you do that. You know what I mean? You get to have your time to fail and grow as an artist kind of tucked away.

And the entire city is doing comedy. Like, you'd be on the bus or on the train and people are talking about their comedy class or trying to figure out the second turning point to their scene. So it's the best — it is the absolute best place to grow as a comedian. ...

And it is such a hard place to be a person of color. I mean, and also, I had moved from Los Angeles, so moving from Los Angeles to the Midwest was like going back in time a little bit. It's just like the thing where you pitch a scene, and the person you're pitching has no idea what you're talking about.

On the cultural divide she experienced as a comic in Chicago

If I have to start by telling you what the No. 3 show on television is, we have a culture divide.

Everybody watches Scandal. Scandal is huge. I once pitched a scene where the women watched too much Scandal and they start acting like Olivia Pope at the PTA meeting or whatever. And the first question was, "So, what's Scandal?" Like, when you turn in a scene, we're talking jokes, we're talking scene structure, we're talking budget, whatever. If I have to start by telling you what the No. 3 show on television is, we have a culture divide.

This is the only TV show I've worked on, so I can't compare it to another show, but it's amazing. It's so great to, like, have all your references get gotten. Or, if people don't get your references, they have the trust in you that they're like, "OK, I believe you that this is funny. I don't know what it is but it's structurally sound and I'll take your word for it."

The Internet has made us so sure that we know everything about a person, and so quick to insult or ridicule. And when people see me ... at the [political] convention — I'm obviously a young black woman, I have pink hair — they're like, "Oh, I know you. You're gonna make fun of me" or "You're gonna say this mean thing to me" or "You think I'm this kind of person." And just approaching them with, "I wanna know what kind of person you are. I don't assume. Tell me," I think allows people to open up.

And then still being challenging. Like, people will say things and you can tell it's something they heard on TV before. And asking that question, "Do you really think that?" or "What about this?" or "Have you really thought about what that would mean three steps down the line?" And getting people to the point where they're actively thinking and engaging and questioning instead of just repeating a thing is so interesting.