Accessibility links
Clinton Campaign Had Additional Signed Agreement With DNC In 2015 NPR has learned that Hillary Clinton's campaign had an agreement, separate from one also signed by Bernie Sanders' campaign, providing control over party decisions in exchange for relieving DNC debt. 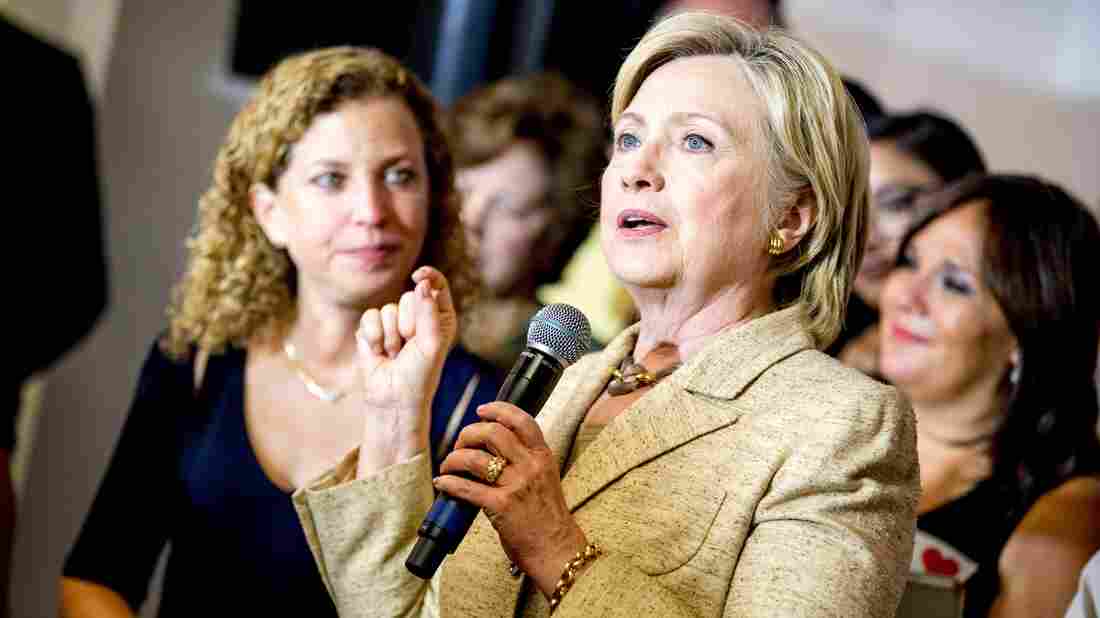 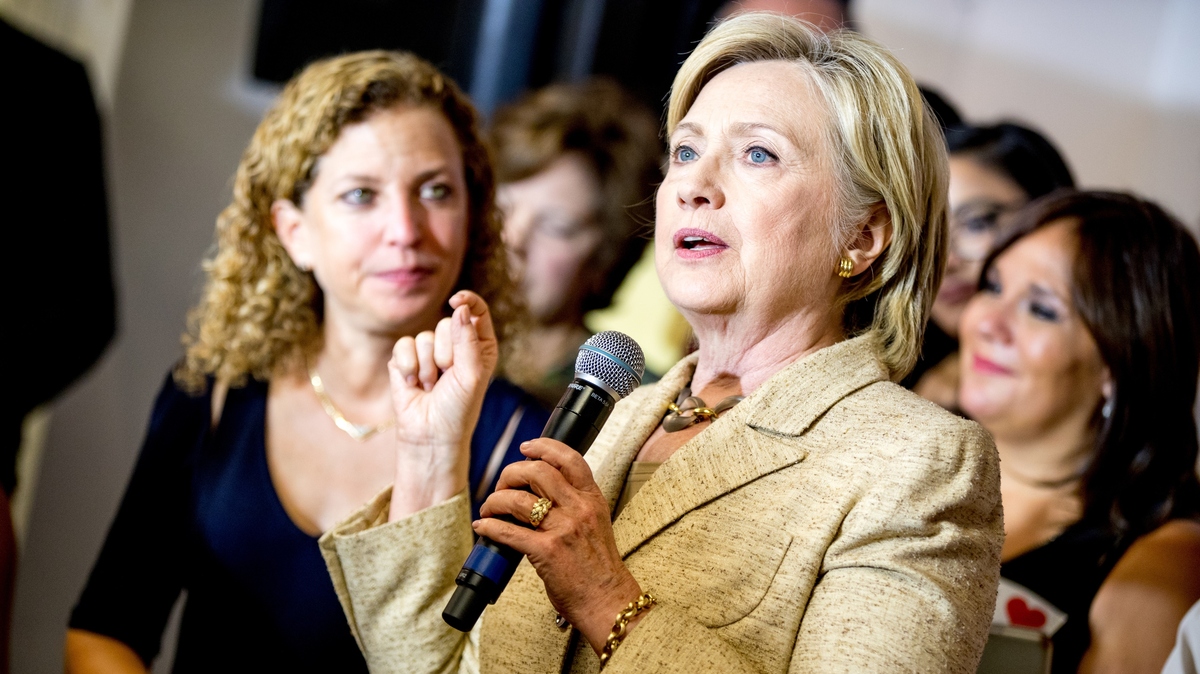 Updated at 11:56 p.m. ET: NPR has obtained the full memo from a Democratic source. Read it at the bottom of this story.

What, exactly, did the Democratic National Committee and Hillary Clinton's presidential campaign agree to in 2015, before any votes had been cast in the Democratic primary?

The question has roiled Democratic politics since Thursday morning, when Politico published an excerpt of Donna Brazile's upcoming book about the 2016 presidential race.

Brazile took over the DNC as interim chair following Debbie Wasserman Schultz's sudden resignation during the Democratic National Convention. Once she was at the party's helm, Brazile wrote that she discovered an agreement that "specified that in exchange for raising money and investing in the DNC, Hillary would control the party's finances, strategy, and all the money raised. Her campaign had the right of refusal of who would be the party communications director, and it would make final decisions on all the other staff."

This agreement has been seized on by everyone from President Trump to Massachusetts Sen. Elizabeth Warren as proof that the DNC "rigged" the 2016 primary for Clinton.

The DNC and former Clinton staffers pushed back on Brazile's claim but never outright denied it.

That may be true — but two Democratic officials tell NPR that Brazile and Perez are referring to two different things. In addition to that joint fundraising agreement the DNC reached with both campaigns, the party and the Clinton campaign struck that separate memorandum of understanding giving the campaign staffing and policy oversight.

That document was signed on Aug. 26, 2015 — before, among other things, Vice President Joe Biden ruled out a run for president.

The DNC has not denied this characterization or timeline.

A Democratic official who has reviewed the document pointed out that in addition to the Clinton signoffs Brazile characterized, it included language stating that "nothing in this agreement shall be construed to violate the DNC's obligation of impartiality and neutrality through the Nominating process" and that "all activities performed under this agreement will be focused exclusively on preparations for the General Election and not the Democratic Primary."

The agreement also noted that the DNC "may enter into similar agreements with other candidates." (Read the full memo below.)

Still, Sanders' 2016 campaign manager, Jeff Weaver, said the agreement was the latest evidence the DNC tried to tip the scales against his candidate. He and other Sanders backers have regularly pointed to the party's scheduling of debates on weekend nights as one example of how DNC officials tried to aid Clinton's campaign.

"I think the DNC should apologize to the millions and millions of people who put their heart and souls into the campaign on both sides, frankly," Weaver told MSNBC Friday. "There are many people who campaigned for Hillary believing it was a fair process. It was not a fair process. And those people are the people who the Democratic Party has to re-establish faith with — the people, the rank and file of this party — allied, independents and other people." (Weaver did not respond to multiple requests for comment from NPR.)

Clinton campaign manager Robby Mook appeared on CNN Friday night and called "laughable" assertions that the agreement rigged the primary against Sanders. Among other things, he pointed to the fact that the memo states that joint efforts were to be focused on the general election.

"The DNC came to our campaign and said, 'We need help. We're not prepared for the general election,'" Mook said. Regarding the fact that the memo gave the Clinton campaign a role in communications hiring, Mook added, "The purpose of the DNC while a primary is going on is to hold Republican candidates accountable, and nobody was filling that post." He also insisted that the Sanders campaign had the ability to enter into a similar arrangement with the party.

Sanders and his supporters have long alleged that the DNC tipped the scales in the 2016 primary. A frequent piece of evidence cited for this was the decision to hold debates on weekends when viewership would be lower. Emails released by WikiLeaks on the eve of the 2016 Democratic National Convention showed that some DNC staffers favored Clinton and were vocal about it. U.S. intelligence believes those leaked emails originated with Russia's efforts to disrupt the 2016 campaign.

Brazile herself was eventually at the center of that controversy. Emails hacked from Clinton campaign chairman John Podesta and released by Wikileaks showed that Brazile, a former CNN commentator, passed along details about questions Clinton would receive at a primary debate and a candidate forum hosted by the network. Following those revelations, CNN ended its relationship with Brazile.

Current chairman Tom Perez was not at the DNC during 2016, but the contested primary and its lingering aftermath have loomed over the former labor secretary as he has tried to rebuild the party.

"Even a perception of impropriety — whether real or not — is detrimental to the DNC as an institution," he wrote in the letter to DNC members. "You have my commitment that 2020 will be a transparent process. That is why I want to make sure that the primary debate schedule is decided well ahead of the presidential primary process and why I stand by the essential work of the Unity Reform Commission."

That commission is charged with recommending changes to the Democratic primary process. On MSNBC, Weaver said its final conclusions — and whether or not they're adopted — will be a key indicator of whether the DNC stands behind its promise to be more welcoming to Sanders and his supporters.

Read the full memo, obtained by NPR from a Democratic source:

"This Memorandum is intended to memorialize our agreement regarding the creation and operation of Hillary Victory Fund (Victory Fund), a joint fundraising committee of Hillary for America (HFA) and the Democratic National Committee (DNC).

"HFA is prepared to raise and invest funds into the DNC via the Victory. In return for this financial support, HFA requires the appropriate influence over the financial, strategic, and operational use of these JFA-raised funds.

"Commencing on September 1, 2015 HFA agrees to raise funds for the Victory Fund sufficient to fund the DNC's data, technology, analytics, research, and communications operations. Specifically, HFA will agree to raise and to instruct the Victory Fund Treasurer, Beth Jones (who is employed by HFA) to transfer from the Victory Fund a minimum of one million and two hundred thousand dollars ($1,200,000.00) to the DNC from its share of the net proceeds under the allocation formula on the first day of every month (beginning October 1, 2015) for these activities (the "Base Amount"). In the event that the Victory Fund is not in possession of adequate net proceeds allocable to the DNC on the first of the month to make such transfer, it shall make the required transfer as soon as adequate funds are available.

"HFA's obligations under this agreement, and the release of the Base Amounts each month are conditioned on the following:

"Once HFA has raised the first $1,200,000 and it has been distributed to the DNC, HFA will be granted complete and seamless access to all research work product and tools (not including any research or tracking the DNC may engage in relating to other Democratic candidates).

"The parties also agree that they will enter into an agreed upon voter file licensing agreement. As consideration for that agreement, HFA will raise an additional $250,000 into the Victory Fund that will be distributed to the DNC no later than March 31, 2016.

"In addition, HFA will also raise funds for the Victory Fund that will distributed to the DNC in excess of the $1,200,000 monthly base amount (Excess Amount). The Excess Amount raised by HFA that is distributed to the DNC will be spent on the DNC's data, technology, analytics, research, and communications operations as directed by HFA (Special Projects). Although the DNC will remain responsible for the day to day execution of those Special Projects, HFA will determine (in consultation with the DNC) the Special Project's scope, strategy, staffing, budget, and manner of execution.

"Finally, HFA agrees that on a monthly basis the Victory Fund will provide the DNC a list of receipts and disbursements from the Victory Fund. The DNC agrees to provide monthly financial reports to HFA as it relates to the use of the funds distributed by the Victory Fund to the DNC.

"In the event that there is a disagreement in the operation of this agreement or the use of the Base Amount, the DNC department head and their HFA counterpart will meet and confer to resolve the matter. If that fails to resolve the disagreement, then you and I will resolve it. If there is still no resolution the DNC Chair and the HFA Chair will resolve.

"Nothing in this agreement shall be construed to violate the DNC's obligation of impartiality and neutrality through the Nominating process. All activities performed under this agreement will be focused exclusively on preparations for the General Election and not the Democratic Primary. Further we understand you may enter into similar agreements with other candidates.

"The attached Joint Fundraising Agreement will be entered into by HFA and the DNC (as well as by State Parties).

"This agreement will be reviewed on March 31, 2016 and either party may terminate any prospective obligation at that time.

"If this memorandum correctly summarizes our agreement, please reply by email with the text – 'Agreed by DNC'."

A previous headline incorrectly dated the agreement to 2016. It was 2015.