Accessibility links
'Beasts Made Of Night' Is The Beginning Of A Great Saga Fantastic worldbuilding sets the stage in Tochi Onyebuchi's new novel, set in a bustling market city inspired by his Nigerian heritage. While the storytelling can be indecisive, the setting triumphs.

'Beasts Made Of Night' Is The Beginning Of A Great Saga

'Beasts Made Of Night' Is The Beginning Of A Great Saga 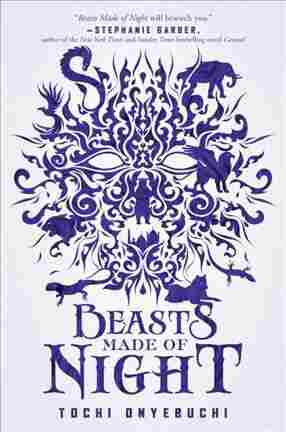 Beasts Made of Night

Fantastic worldbuilding sets the stage in this debut novel, as Tochi Onyebuchi conjures up a busy market city inspired by his Nigerian heritage and populates it with a group of outcast kids who shoulder the sins of the rich and powerful.

In Kos, all nobles – especially the royal family – are free from sin and its accompanying guilt. This purity allows them to rule, but it comes at a price. Whenever one of them commits a sin, they send for a Mage and a sin-eater, or aki. The Mage draws out the sin, forcing it to materialize in the form of a monstrous beast. The aki fights the beast, killing the sin and absorbing it, until the only remaining sign of its presence is a tattoo of the beast and a lingering sense of culpability. Aki eke out a meager living fighting sins, but eventually, the guilt consumes them, leaving behind empty, lifeless shells.

At 17, Taj has already become legendary among the other aki, who call him Lightbringer and Sky-Fist. He's killed and absorbed more beasts than the rest, and while for most aki, the tattoos usually fade with time, Taj is completely covered in the ink of other people's sins. It sets him apart and makes him even more feared and reviled than the other aki.

When one royal sin gets out of hand, Taj is called in to dispatch it. But, much to everyone's amazement, Taj discovers that he has the ability to command the sin beast and bend it to his will. This marks the end of the life Taj has built for himself among the aki, and throws him into a whirlpool of political intrigue. Soon everyone from the princess to different sects of Mages are pulling him in different directions, trying to convince him that only they have his beloved city's best interest at heart. As he is buffeted from one scheme to the next, Taj must come to terms with the truth of his power and changes it could bring to his world.

The city of Kos is always at the center of Taj's heart, and the same is true of the book. Vivid descriptions bring the alleys, shops, and palaces to life, and the lovingly imagined food and complex layers of society are so evocative and so different from the usual trappings, it creates a world that is truly a pleasure to explore.

Also notable is the inclusion of many characters who are women of color. All too often in fantasy novels, the default for side characters is white guy. Here we see women at all levels of society, from Taj's fellow aki to nerdy Mages to bodyguards, and even the princess proves to be more than just a pretty face. This feels like a deliberate and joyful choice, and Onyebuchi's dedication to real-life social justice carries seamlessly into his imagined world.

This is definitely a book to read for its world and concepts, as the narrative jumps indecisively from one incident to the next, carrying Taj along with it, never arching so much as falling into what happens next. As is so often the case in the story of a Chosen One, Taj doesn't have a lot of agency, and his acceptance of his fate makes it hard to sympathize with him at times. As affable and charming as he is, it often feels as if half of the conflict would simply evaporate around him if he only took a moment to figure out his own desires and make his own choices.

This is not the first fantasy book to take more interest in the world than the story – it certainly worked for Tolkien.

It's only as we reach the final chapters of the book that Taj begins to gain some clarity into his own purpose, just as the story finally takes on the epic scope it hinted at all along. In some ways, the real narrative is only just beginning as the book draws to a close, making Beasts Made of Night a long introduction for a more exciting story — which we presumably will get in the sequel.

This is not the first fantasy book to take more interest in the world than the story – it certainly worked for Tolkien, and Beasts Made of Night could do much worse than to follow in those footsteps. Onyebuchi has created a world that will no doubt inspire many in turn.