Accessibility links
The Property Brothers Flip A Page On Their TV Triumphs If you've ever watched HGTV, you've probably come across Drew and Jonathan Scott — the twins from Canada who are the darlings of home improvement. Their new book is called It Takes Two. 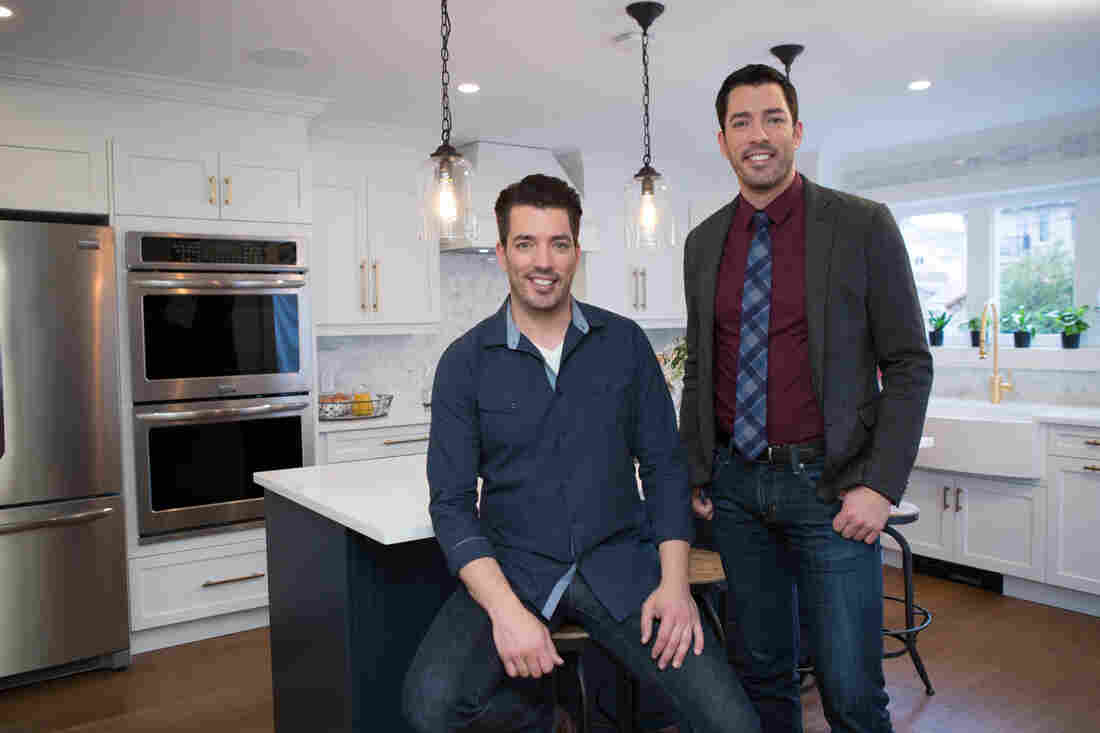 The Property Brothers, Drew and Jonathan Scott, have a new memoir called It Takes Two. Courtesy of HGTV hide caption 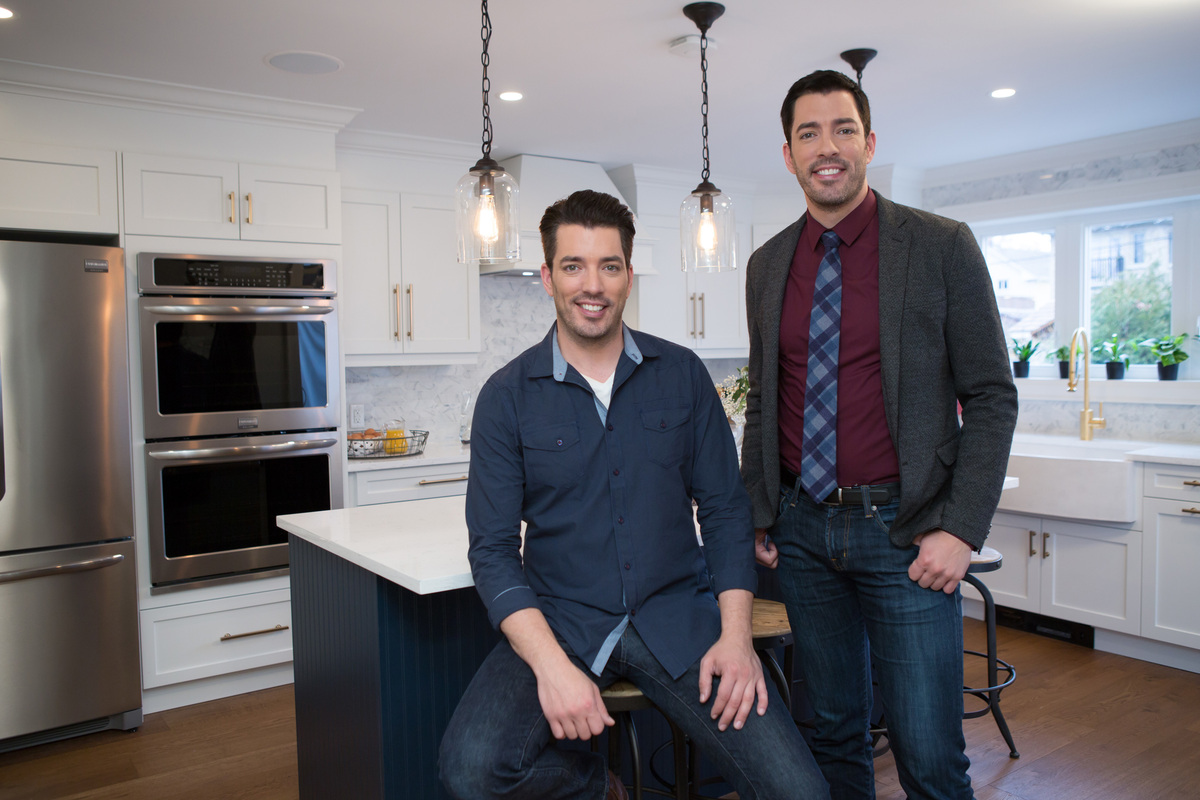 The Property Brothers, Drew and Jonathan Scott, have a new memoir called It Takes Two. 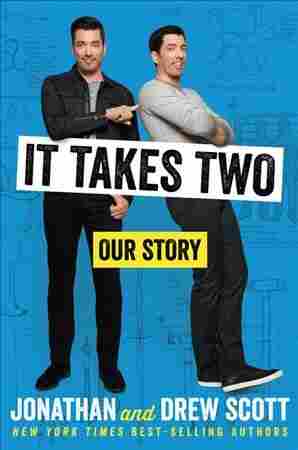 by Jonathan Scott and Drew Scott

Drew and Jonathan Scott struggled for years to break into the entertainment industry. So the twin brothers decided to open a real estate services company to pay the bills as they continued trying to become stars.

Then, they got an idea — why not combine their two pursuits? And thus, the Property Brothers were born.

Drew and Jonathan now host the smash-hit home renovation show Property Brothers (and its spinoffs) on HGTV, where they do about 50 actual renovations a year for television cameras. Their journey is documented in their new memoir It Takes Two: Our Story.

On the start of Property Brothers

Drew Scott: So way back, Jonathan and I were – we were entertainers as kids. We were actors; we did theater, musicals; we ended up getting into commercials and some TV spots. Actually, one of our jobs, we were clowns. We had all this energy, so our parents figured, 'Go be clowns, and get rid of the energy, so by the time you come home you're calmed down a bit.' ... You cannot take yourself too seriously. And don't get the greasepaint in your eyes, because damn, that hurts.

Jonathan Scott: Oh that hurts. Hard to get out.

Drew: So, anyway, we were entertainers as kids, and we wanted — we had these aspirations. Jonathan wanted to do more magic, and I wanted to do more acting and directing for scripted. But we didn't want to be struggling artists, so we actually got into real estate as a way to fund our creative endeavors right out of high school, back in the mid '90s. And I started getting more host auditions as a real estate expert instead of acting auditions, and that's where it all started—

Jonathan: His very first role that he landed as a host, he calls me up, he's like, 'Hey Jonathan, I landed a show!" And I'm like, 'Oh my gosh, that's amazing, what's the show?' He's like, 'It's called Realtor Idol. It's like American Idol for realtors.' ... And I was like, 'That's the dumbest thing I've ever heard.'

Drew: I'm glad that didn't take off, and then the next show—

Lulu Garcia-Navarro: What was that even — show — about? Like, would people stand up on stage, and like, what, show you pictures of homes?

Drew: Who doesn't like a singing realtor? I mean, come on. So I told that production company—

Jonathan: How do you grade and give scores to an amortization table?

On the 'open concept' design that has become a signature

Drew: So a lot of our design, when Jonathan and I work with clients, we're being realistic for their lifestyle and what they're looking for.

Lulu: I work in an open plan office, so I am against it!

Jonathan: Keep in mind, open concept is just supposed to be between the kitchen, dining room and living room. Those are the entertaining areas, where it's nice to have sight lines, you don't want to feel like you're stuck in the—

Drew: No toilet in the middle of the room.

Jonathan: But yea, if you have a family, there should be another area where there's kids' toys, and you can close off that noise and mess. You know, open concept bathrooms are not the greatest.

Jonathan: We've heard it all — the positive, the negative — and when you are dealing with the largest asset in most peoples' lives, obviously emotions can get involved. The one thing I would say, you know, there are some shows out there that are not too realistic, or there have been shows over the years that have said, you know, they're fake, and they just make it pretty to look at for camera, but in reality the work is terrible. Well, we've been lucky enough and fortunate enough that we have a high standard with everything that we do, and we've never really had that flak.

The only thing that people say is the prices. They say, 'How can you renovate an entire house for $50,000?' Well, we don't. On Property Brothers, for example, we're only – for the show, we're doing three to four rooms. So the budgets and timelines you see are for the three to four rooms. Which, we actually say it on the show, but sometimes people, you know, they'll miss that.

Drew: It's also the same thing too – there was a story I read one time that some shows, at the end of it, they back the truck up and take all the furniture stuff away. I'm like, 'That's the biggest slap in the face.' Like, I could have been so--

Drew: [beeping truck reversal noises] So, no. We really become close with the families. And that's the thing, too. I know it's a stressful experience, 'cause you're taking what would normally be months and months and months of renovation, and you're cramming it into an eight-week timeline, and a 45-minute show. So it's hard to discuss all the complexities of a construction project in 42 minutes, but we try to make it as authentic as we can.

Eric McDaniel, Oliver Dearden and Ed McNulty produced and edited the audio of this interview. Patrick Jarenwattananon adapted it for the web.