Accessibility links
'Twin Peaks: The Final Dossier' Does What 'The Return' Didn't Twin Peaks co-creator Mark Frost reveals the final fates of several characters and ties up the show's narrative threads in a way that is as satisfying as The Return was mystifying.

'Twin Peaks: The Final Dossier' Does What 'The Return' Didn't

'Twin Peaks: The Final Dossier' Does What 'The Return' Didn't 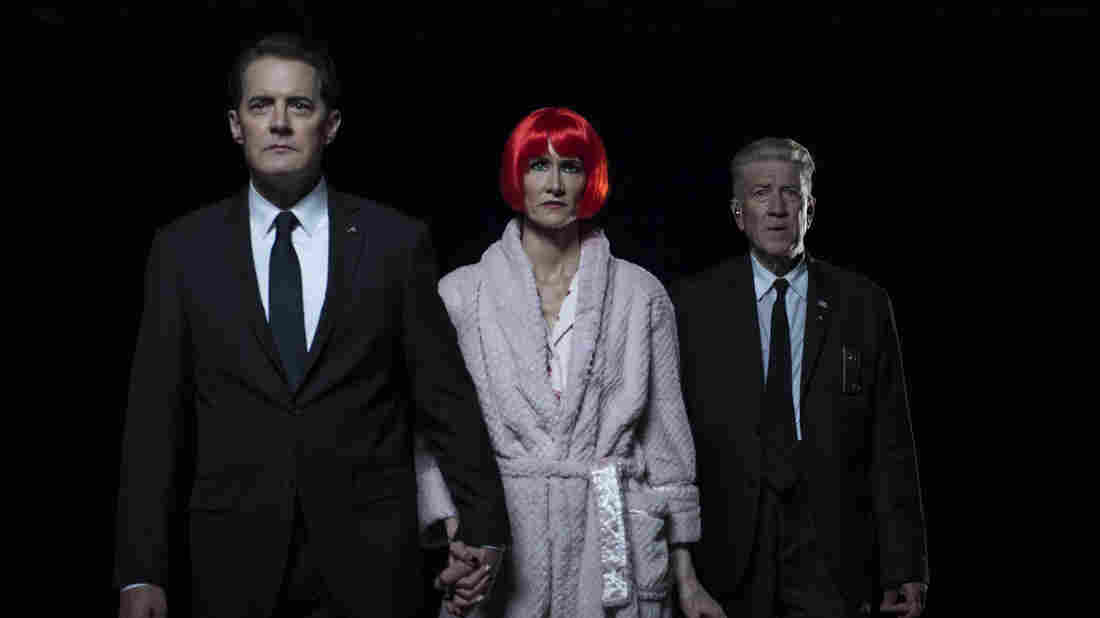 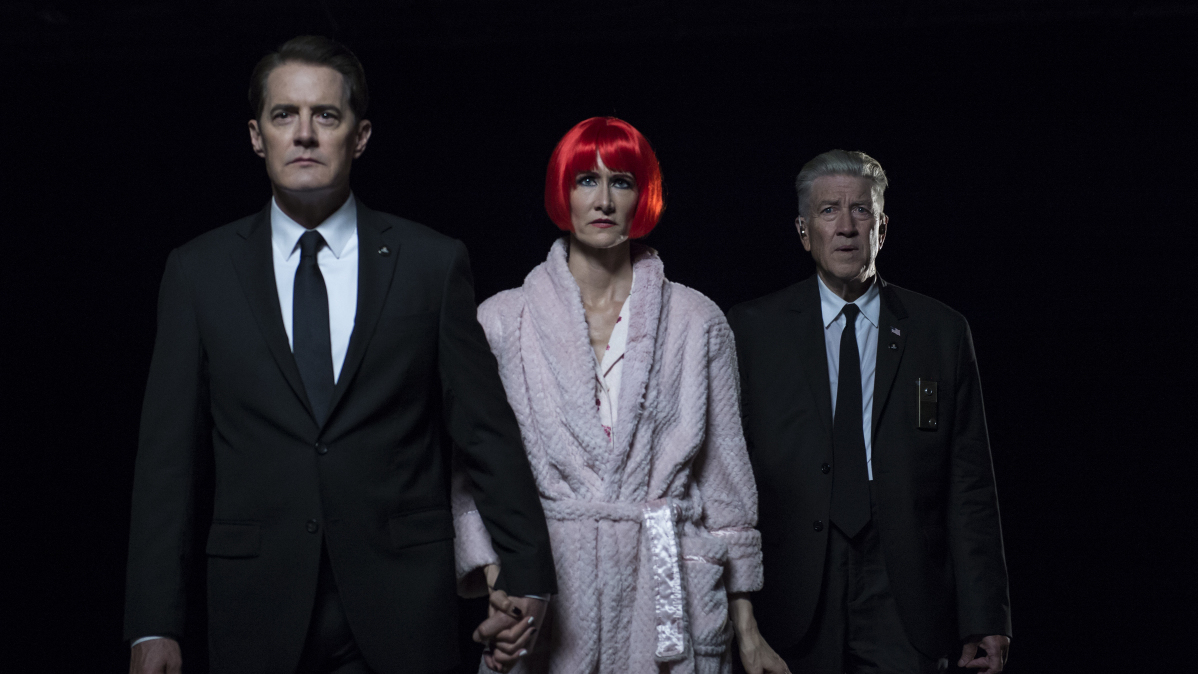 It's Dead ... Wrapped (Up) in Hardcover: A new book provides the narrative closure that this summer's Twin Peaks: The Return (starring Kyle MacLachlan, Laura Dern and David Lynch) eschewed.

This article discusses several plot elements of the original Twin Peaks television series, the 2016 book The Secret History of Twin Peaks, as well as this summer's Showtime mini-series, Twin Peaks: The Return.

Twin Peaks — the show and the cultural phenomenon around it — began life as the co-creation of two starkly different men: filmmaker David Lynch and writer Mark Frost. 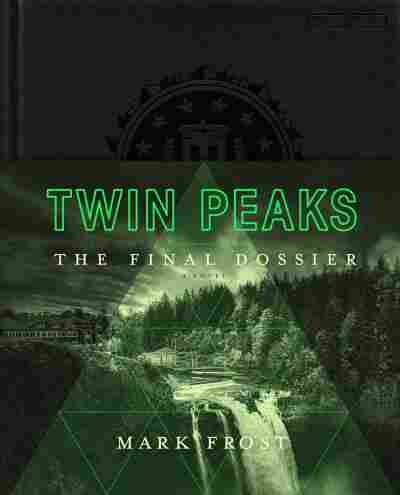 Let's begin with a sweeping, simplistic and grossly unfair generalization: David Lynch is an artist. Mark Frost is a storyteller.

Certainly there is story in Lynch's art and art in Frost's storytelling. But their essential difference is one of kind, not quality.

Lynch delights in combining arresting, often absurd visuals (a giant teapot communicating via steam numerals and symbols!) and uncanny soundscapes (the low, electric crackle of ozone). He is a director in such close touch with his subconscious that it bleeds into every shot; he often lets it guide where and how he places his camera, and what his actors say. It's that openness to happenstance, as much as his gleeful willingness to expose the darkest and most violent patches of the human soul, that makes Lynch Lynch. His films keep working on us long after the credits roll — they live in our memory as a series of discrete images matched to intense emotions, just as we remember our dreams.

Frost, on the other hand, has written for television and film for years. He made his bones on shows like The Equalizer, Hill Street Blues and The Six Million Dollar Man. He has written novels dealing with occult conspiracies as well as nonfiction about baseball and golf, for pity's sake. The thing that connects them is the clarity of his storytelling. He outfits his characters — fictional and not — with defined, detailed and recognizable motivations. We know what they're thinking before they tell us. In his novels, weird and even occasionally downright Lynchian things happens, but they're built into a familiar narrative infrastructure. Something happens, people react. Consequences dependably ensue and determine characters' next steps. Because that is how stories, and lives, work.

The two men complement one another. To make Twin Peaks — a demented mix of serialized narrative and dark surrealism — you need them both. They're a two-stroke engine: Lynch is id, emotion, dream logic; Frost is superego, intellect, story logic.

Forget yin and yang — Lynch is Ernie; Frost is Bert.

This summer's Twin Peaks: The Return, on Showtime, was by turns brilliant and baffling. Which is to say: It felt like Twin Peaks. But with Lynch directing every episode, his was the presence more keenly felt. Given the elbow room of 18 episodes, he delighted in indulging his fetish for ... indulgence. The pacing was tectonically slow: Scenes and storylines didn't so much unfold as ooze. He widened the canvas, with subplots set in Las Vegas, Philadelphia, South Dakota and Texas. But even when characters moved from one place to another, they seemed fixed in place. Stasis emerged as a major theme, as characters struggled to free themselves from causality loops (Sarah Palmer), marriages (Nadine and Ed Hurley) and alternate realities (Dale Cooper and ... Audrey Horne, probably?).

Which only makes sense, in a show that was meant, at least in part, as a riff on the soap opera, which churns through plot but keeps characters cycling forever, denying them growth, change and the one thing that gives a story — and a life — a definable, narratively satisfying shape: an ending.

Lynch and Frost wanted us to notice how little had changed in the town of Twin Peaks — how its rhythms had kept constant, all these years, even as the characters we knew had grown older, or died.

The Secret History of Twin Peaks

In 2016 — before The Return began airing — Mark Frost published a massive, mixed-media novel, The Secret History of Twin Peaks, a deep dive into the show's grounding mythology. Frost wove the tale of the town — and its occult underbelly — into various eras of American history, from the Lewis and Clark expedition to the modern day. The conceit of the novel was that it was a cache of documents hidden by a mysterious someone (their identity would be revealed, in the end) pertaining to the mysterious forces in and around the town. In footnotes and marginalia, we are introduced to another mysterious someone — an FBI agent tasked with reviewing the documents — who would later turn up in The Return.

The book was Frost, through and through — painstakingly detailed, comprehensive and constructed in such a way as to appear to be a random collection of information compiled from different sources. In actuality, of course, Frost ruthlessly engineered it to provide a satisfyingly rich reading experience that delivered its own delights while setting the stage for The Return.

Well, The Return returned, with moments of heart-stopping genius (Episode 8) and frustrating lassitude (Dougie-as-Idiot-Odysseus). We re-met several characters — many only glancingly — and delved deeper into the high weirdness of the show — and, especially, of the film Twin Peaks: Fire Walk With Me. As mentioned, it was high-dose, black-tar Lynch, who famously prefers to let his images speak for themselves, eschewing anything as tidy as exposition. Or character motivation. Or logic.

Thus, the series' conclusion was many things — challenging, off-kilter, counterintuitive, seriously banana pants — but what it was not, except in the most abstract sense, was satisfying.

Now comes Twin Peaks: The Final Dossier, a new novel from Mark Frost. Both Lynch and Frost have made some noises about producing more episodes of Twin Peaks, but given the logistics (and The Return's anemic ratings), that isn't likely to happen. This book, then, is probably the last glimpse of Twin Peaks we're going to get.

And because it's Mark Frost — whose bailiwick includes things like characterization and causation and consequences — it's a hugely satisfying one.

The structure of the thing helps a lot: It's FBI Agent Tamara Preston's final, post-events-of-The-Return report to her supervisor, Gordon Cole, and it takes the form of a series of files — 18 in total — most of which focus on individual residents of Twin Peaks.

Because so many of the events of The Return just sort of ... happened, with Lynch simply asserting them (stylistically! entertainingly!) in series, they floated before our eyeballs devoid of any real context or connective tissue — more art than story.

The Final Dossier is all story — in fact, it reads like the "story bible" television showrunners create to build a show's narrative universe, filled with all the good, grounding stuff The Return never bothered with.

Granted, some of it feels more dutiful than anything else. I devoured much of the critical and fan commentary touched off by The Return, and I certainly don't recall anyone clamoring for more of Dr. Jacoby's back story, but here it is anyway.

Instead, much of that commentary — in think pieces, on podcasts — revolved around theories. Lynch wasn't interested in supplying narrative connective tissue, and in its absence, fans and critics conjectured about things like what had happened to certain missing characters, and — surprisingly often — just what the hell they had just seen, anyway.

Those are the answers Frost happily supplies here — though it must be said, the answers themselves are often unhappy ones. We learn the final fates of Donna Hayward, Annie Blackburn, and, yes, Audrey Horne. We peruse Leo Johnson's autopsy report. And as the chapters progress, we start to leave the mundane world of Twin Peaks and — in chapters devoted to Windom Earle, Major Briggs, Phillip Jeffries and, thrillingly for fans, "Judy" — enter the world of the Black Lodge. Frost provides the connective tissue, walking us through The Return's cascade of images, turning them into a clear, easy-to-follow chain of events, strung together by cause and effect.

It's particularly satisfying, in those later chapters, to read Frost essentially confirming several popular fan theories about various mystifying aspects of the show's mythology. It's also fun to see him take meta-potshots at some of the original series' wrong turns and dead ends. In a section devoted to (bored sigh) James Hurley, Agent Preston writes, "... after being taken in by a predatory older woman outside Portland, Oregon, James stumbled into the role of hapless patsy in a murder scheme straight out of noted noir novelist James M. Cain. (I won't bore you with the details.)" Oh, don't we wish.

But Frost is doing more than filling in blanks and checking boxes here. The chapters on The Log Lady and — surprisingly, perhaps — Sheriff Harry S. Truman are deft, gentle and moving. And the final chapter does something so quietly transformative to the show's entire infrastructure that it takes a while to digest.

Quibbles? Sure. The voice of Agent Tamara Preston here is wry, and knowing, and quite mordant when called for, as it was in the marginalia of The Secret History of Twin Peaks. She is a clearly defined, rounded character who in no way resembles the blank-faced, anodyne shrinking violet of The Return.

Also, The Final Dossier is quite slim, especially compared with the considerable heft of The Secret History. Granted, Frost packs a lot of information into its 150-odd pages, but when saying this final, satisfying goodbye to a world as rich and strange as Twin Peaks, you probably won't want to do it in a single sitting.