Accessibility links
'Spineless' Dives Deep Into The World Of Jellyfish Part memoir, part travelogue, part science tome, Juli Berwald's book is thoroughly entertaining, and makes the case for the jellyfish as both fascinating animal and a bellwether for climate change.

'Spineless' Dives Deep Into The World Of Jellyfish

'Spineless' Dives Deep Into The World Of Jellyfish 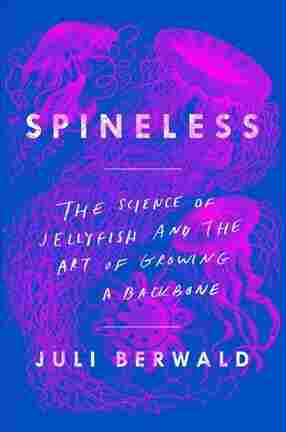 The Science of Jellyfish and the Art of Growing a Backbone

So much writing about climate change concerns winners and losers, the few who will benefit and what will be lost in our planet's altered future. These pronouncements tend to be sweeping — every shoreline will flood, billions of the world's poor will suffer — in keeping with the global scope of the challenge.

But in Spineless, a thoroughly delightful and entertaining new book on jellyfish, author Juli Berwald takes a different tack. Berwald, a science writer for National Geographic, focuses on this single animal, and shows again how climate change science is more complicated than headlines.

The ocean is already 30 percent more acidic than it was a hundred years ago, prompting Berwald to ask: Will this acid bath be good or bad for jellyfish? It's a deceptively simple question that spurs a whole book, revealing how little we still know about our planet; Berwald can't even get scientists to agree on whether global jellyfish populations are going up or down.

This is important, as jellyfish do more than sting vacationers. If the numbers are high, they need to be managed, as jellyfish can clog power plant intakes and ruin fisheries. But if they are low, they need to be protected, so they can filter oil spills and maintain their spot in the ecosystem. And scientists don't have any quick answers. "Understanding jellyfish means recognizing the oceans in their complexity rather than homogenizing their problems," Berwald writes. In other words, this book is no satisfying-but-wrong pop science video.

Spineless is part travelogue, part memoir, part deep-dive (literally) into the world of jellyfish, and Berwald brings a genuine sense of wonder to the topic. She is a former science textbook writer, but don't be alarmed. Berwald puts that experience to the best possible use, deploying a range of analogies to explain complex marine science for the rest of us. Breaking down the ecosystem of open-ocean jellyfish, she writes how they attract food and predators, filling a niche like "trees in a prairie."

One of the joys of a single-subject book like this is the fascinating marginalia. That there is a Jellyfish Act of 1966. That a man is murdered via jellyfish in a Sherlock Holmes mystery. That NASA bred jellyfish in space to understand our inner-ear sense of balance, and produced jellies with permanent vertigo. That we humans have similar pacemakers to jellyfish, which is why they look like a beating heart when they swim.

Jellyfish are ancient, one of the few survivors of a mass extinction 555 million years ago. In an odd quirk, they are older than their primary food today, which evolved after them. Berwald wonders if this antiquity is one reason for her fascination; she calls them "a ghost from our true garden of Eden."

The most vivid parts of the book concern Berwald's trips to rural Japanese fishing villages to find giant jellyfish that weight hundreds of pounds. The travel is exhausting, tedious, nauseating, and uncertain, since jellyfish blooms come and go with little warning. But when finally, out on a fishing vessel, they bring in one with a net, Berwald's enthusiasm is tempered. "There was no victory in reaching this goal. Instead, there was a real emptiness to the moment-born, I think, of the realization that the massive animal would die before me."

'Spineless' can serve as inspiration for any of us to reclaim a creative space in the midst of family life.

The book's subtitle is "The Science of Jellyfish and the Art of Growing a Backbone." The spine in question is, obviously, the author's. Berwald writes that she found jellyfish just as she emerged from "the haze of sleepless nights" associated with caring for young children; she was one of many female scientists who don't complete their post-docs or pursue university appointments, falling out of academia as the demands of a spouse or children take over. Spineless can serve as inspiration for any of us to reclaim a creative space in the midst of family life.

And in fact, for Berwald, jellyfish become a family project: Vacations veer off into research trips, and she even buys a tank and three jellyfish and her kids name them Peanut, Butter, and Jelly. (Unfortunately, they last about as long as goldfish from the county fair.)

With Spineless, Berwald isn't writing a lean-in manifesto. Instead, she's doing something more universal, yet subtle. This is the story of looking back from a certain age and a certain place and assessing how you got there, how your life turned out the way it did, and finding peace in that — but also motivation to return to the passions of youth.