Accessibility links
President Trump Was Elected One Year Ago — And Americans Are Feeling Aggrieved Cultural grievances were a big part of what drove Trump's election, but Americans across the racial spectrum say their group faces discrimination. 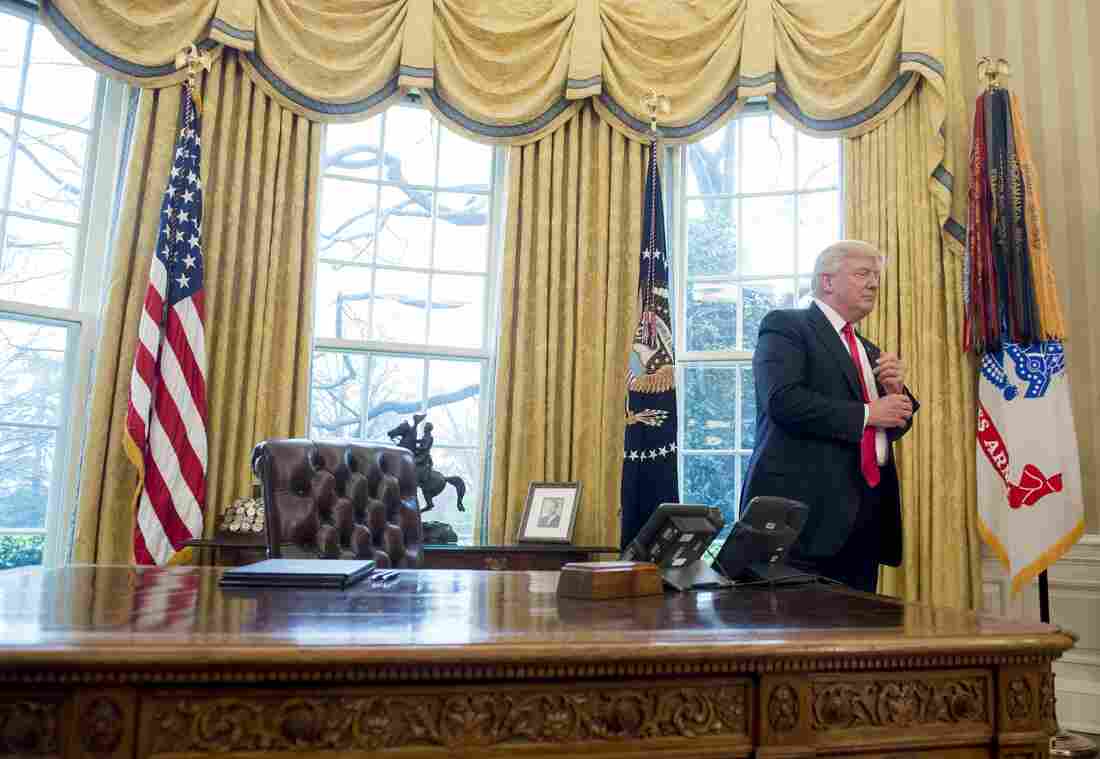 When his back is against the wall, President Trump goes back to where he derives energy — his base. That includes a large percentage of whites without a college degree. Saul Loeb/AFP/Getty Images hide caption 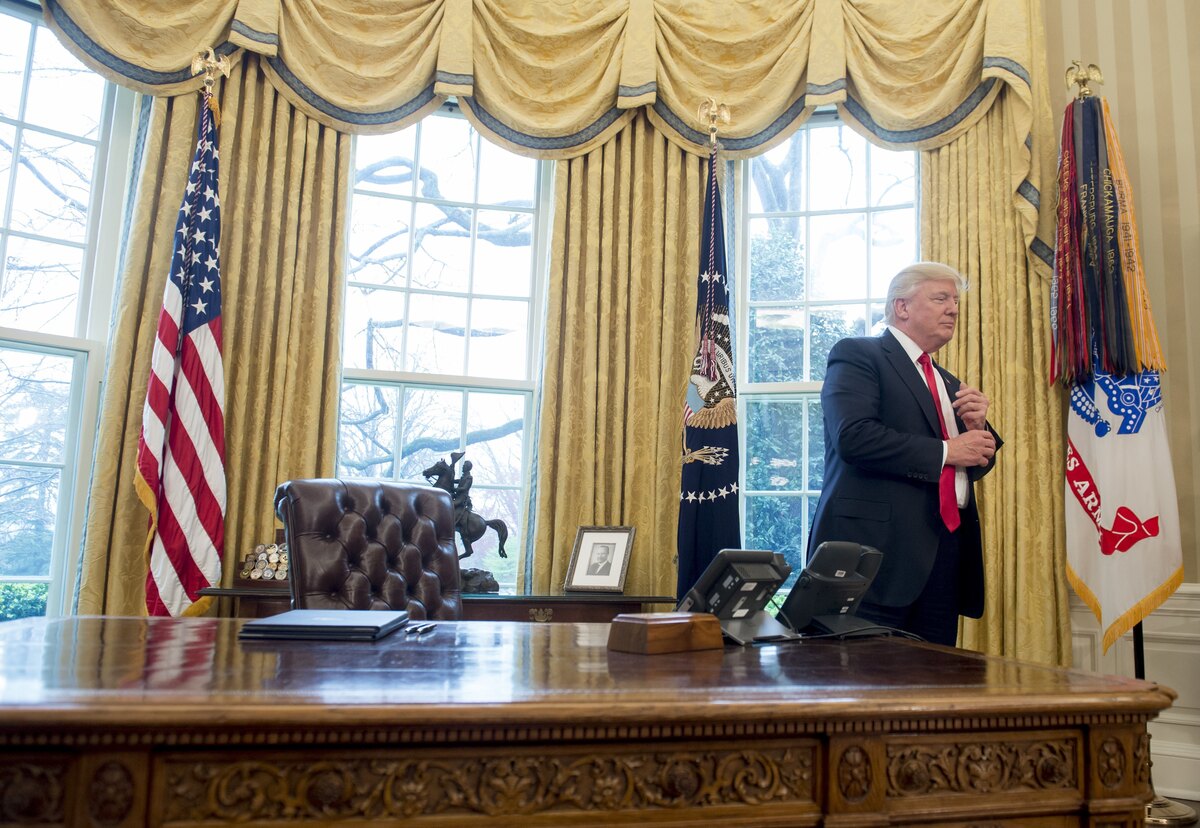 When his back is against the wall, President Trump goes back to where he derives energy — his base. That includes a large percentage of whites without a college degree.

Donald Trump won the votes of whites without a college degree by a bigger margin than any Republican presidential candidate since 1980. And there is reason for that. He gave voice to a group of people who have felt left behind.

"Every single American will have the opportunity to realize his or her fullest potential," Trump said in his election night victory speech, one year ago this week. "The forgotten men and women of our country will be forgotten no longer."

At nearly every rally and campaign event, populated largely by whites, Trump spoke to their cultural grievances — and he has continued to do so as president.

But what has also been clear is that nonwhites, many of whom have felt like targets of Trump's nationalist and protectionist tendencies, are also aggrieved. A survey by NPR, the Robert Wood Johnson Foundation and the Harvard T.H. Chan School of Public Health found that majorities across racial lines, including whites, said discrimination exists against their group.

It does seem that in America today, it is something of a golden age of grievance.

It may be hard to believe, but this week marks one year since Trump was elected president of the United States. And it hasn't been the easiest go of it for the 45th president.

As a candidate, Trump had the lowest favorability ratings of anyone ever elected since polling began. And since his ascendancy to the presidency, he has continued along a similar pattern — with the lowest job-approval rating of any president in modern polling.

According to an average of the polls, Trump stands around 39 percent. That is about where he has been throughout his first 10 months in office. He peaked around 46 percent in early February, just after his inauguration, and he has never dipped below 37 percent, which he hit in mid-August.

That was right around the time Trump faced widespread criticism for his response to racial violence and protests in Charlottesville, Va.

All about that base

It has been clear that when his back is against the wall, Trump goes back to where he derives energy — his base.

"We have to get much tougher," he said after the New York attack, echoing a line from the campaign trail. "We're so politically correct that we're afraid to do anything."

His base is holding mostly firm. There is some evidence of a softening of support but not enough that shows his people abandoning him.

Art of the deal?

Rhetorically, Trump certainly hasn't abandoned his base, but what about on policy?

The next lines of that election night speech, after noting the forgotten men and women were these:

"We are going to fix our inner cities and rebuild our highways, bridges, tunnels, airports, schools, hospitals," Trump said. "We're going to rebuild our infrastructure, which will become, by the way, second to none. And we will put millions of our people to work as we rebuild it."

Despite that promise, an infrastructure bill hasn't even been introduced — or pushed by the White House, for that matter.

What's more, Trump has so far gotten no major legislation through Congress — not a repeal and replace of the Affordable Care Act, not a tax overhaul.

But he appears to have a long leash with his base, which is willing to blame others — Democrats, Republican leaders — but not the man they voted for for president who is trying to, in their view, "drain the swamp."

Part of that long leash could be because cultural grievance was more important to his victory than economic issues.

The Atlantic, citing data from the Public Religion Research Institute, reached that conclusion in May:

"In the wake of Trump's surprise win, some journalists, scholars, and political strategists argued that economic anxiety drove these Americans to Trump. But new analysis of post-election survey data conducted by the Public Religion Research Institute and The Atlantic found something different: Evidence suggests financially troubled voters in the white working class were more likely to prefer Clinton over Trump. Besides partisan affiliation, it was cultural anxiety — feeling like a stranger in America, supporting the deportation of immigrants, and hesitating about educational investment — that best predicted support for Trump.

"This data adds to the public's mosaic-like understanding of the 2016 election. It suggests Trump's most powerful message, at least among some Americans, was about defending the country's putative culture."

Why cultural grievance is so salient

Look no further than the NPR poll — 55 percent of whites said they believe discrimination exists against whites, generally.

That is even though just 19 percent said they have personally experienced discrimination in applying for jobs.

Even fewer whites said they have personally experienced discrimination when it comes to promotions, college acceptance, interactions with the police, or housing.

There are major political divisions among whites.

Three-quarters (74 percent) of white Republicans said discrimination exists against whites. But when it comes to Democrats, it's less than a third (28 percent).

That is an almost 50-point gap.

There are also big splits when it comes to how well-off financially a white person is.

The more money a white person makes, the less he or she thinks discrimination against whites exists generally. In some cases, they are also less likely to say that they've personally experienced discrimination or that it happens often in their neighborhoods.

Roughly two-thirds of whites without a college degree and whites who live in rural areas, however, believe discrimination against whites exists. And those whites are also more likely to say they've experienced that discrimination personally.

And those are exactly the kind of people who are in Trump's base.

That is very different from nonwhites

Nonwhites believe discrimination exists against their groups by even wider margins than whites. (Of course, many would argue that nonwhites face real rather than perceived racism — as the numbers bear out.)

Here is what nonwhites said about whether discrimination exists against their group:

And much higher percentages of nonwhites say they have personally experienced discrimination.

For example, a third of Latinos say they have experienced discrimination when it comes to applying for jobs, getting paid equally or looking for housing.

The gap between whites and African-Americans is even larger.

Half or more African-Americans said they have been discriminated against personally when applying for jobs, getting paid fairly and in interacting with police.