Accessibility links
Dutch Artists Painted Their Patriotism With Pearls And ... Parrots? In the 1600s, after decades of war, the Netherlands was thriving. Artists like Johannes Vermeer celebrated the nation's wealth with images of fine clothing, glimmering pearls and imported parrots. 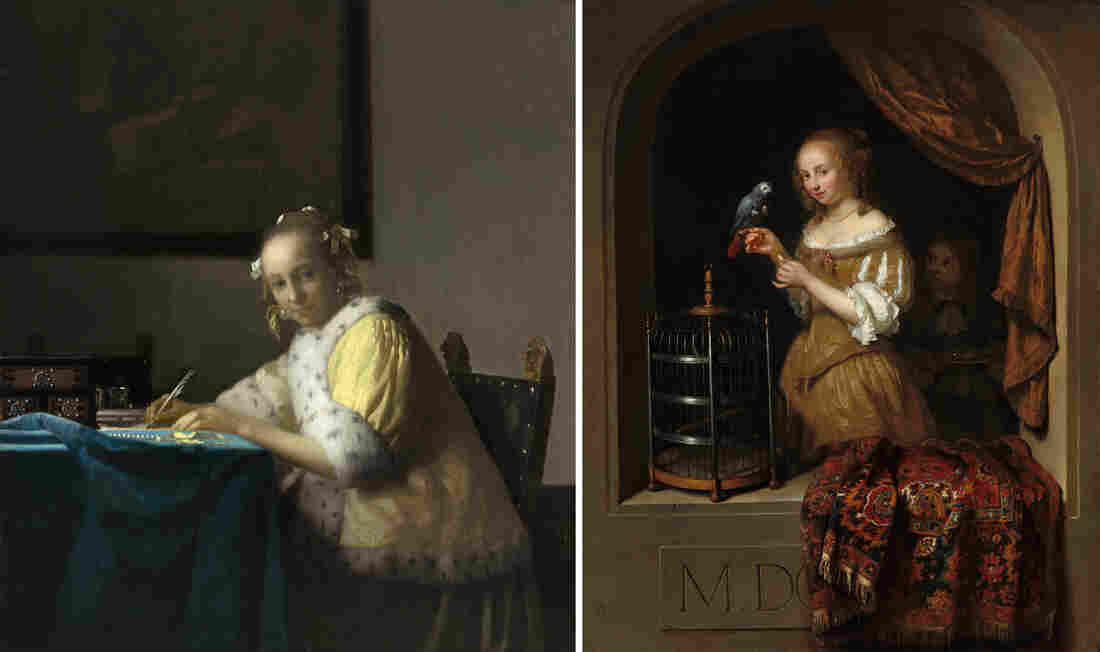 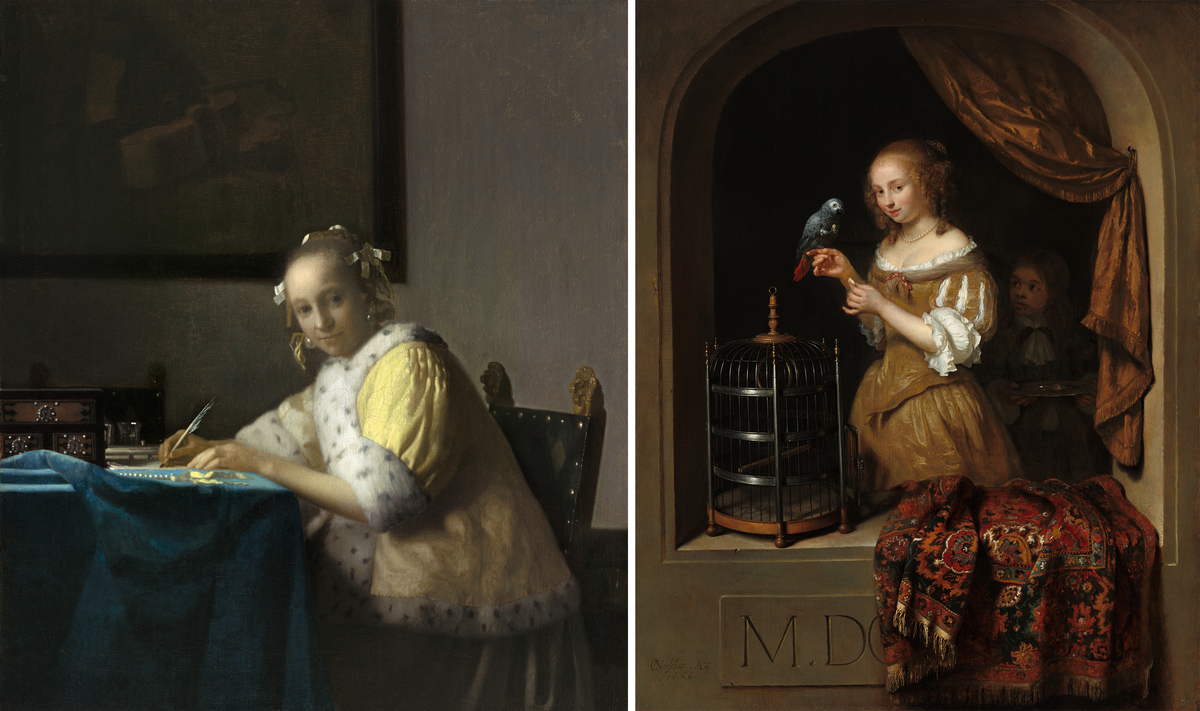 Johannes Vermeer's Young Woman Seated at a Virginal doesn't quite look like a Vermeer painting. The titular young woman is klutzy at her keyboard, and graceless. She's also sitting in a dark room — none of that ethereal, luminous light Vermeer normally shines on his subjects.

Vermeer created the painting in 1675, when he was in his early 40s and broke. It was the last year of his short life. National Gallery curator Arthur Wheelock says, "We know that he dies suddenly and may be ill, so I don't know what effect that might have on this [painting]." 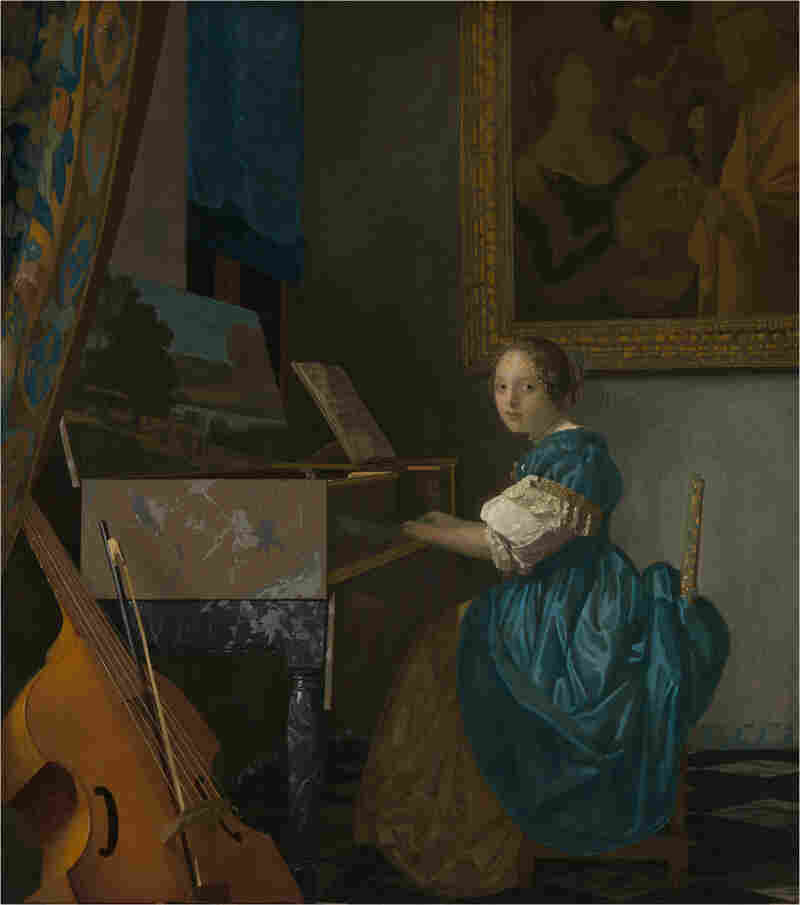 Johannes Vermeer's Young Woman Seated at a Virginal (1675) is much darker than the paintings most people associate with the Dutch artist. The National Gallery, London hide caption 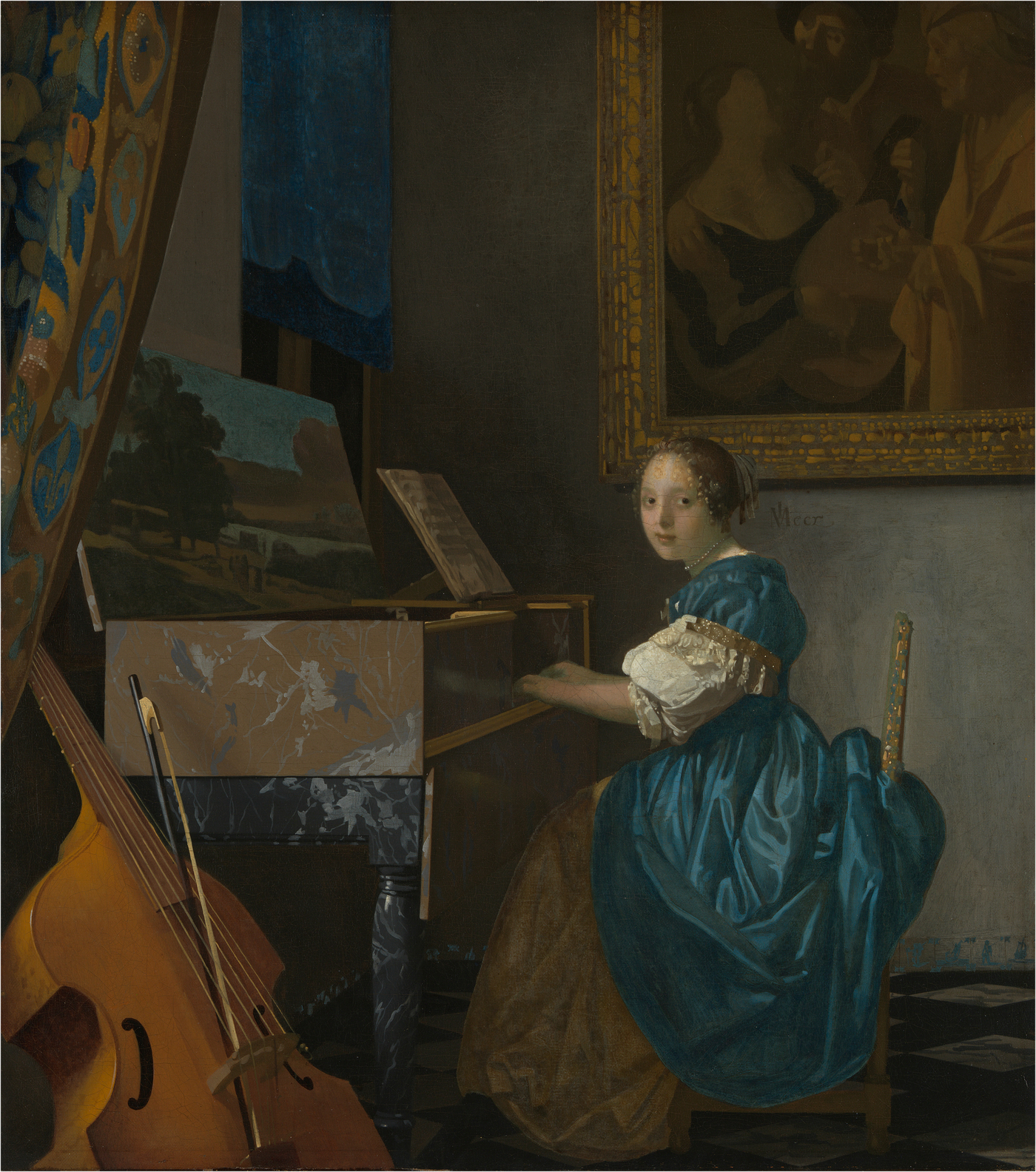 Johannes Vermeer's Young Woman Seated at a Virginal (1675) is much darker than the paintings most people associate with the Dutch artist.

So little is known about Vermeer. There are only 35 or 36 paintings of his left in the world, and right now the National Gallery is showing 10 of them — domestic scenes, many with glorious, gentle light. In Lady Writing (1665), lemony sunshine pours onto a woman's ermine-trimmed yellow jacket as light strokes her quill pen. That's the Vermeer most people know.

The National Gallery exhibition, "Vermeer and the Masters of Genre Painting," has lots of letter-writing ladies. "The letter writing is a big theme," Wheelock says, "and it demonstrates one thing: the literacy, the level of literacy in the Dutch republic, and the importance of education."

Women were educated (in fact, people at all levels of society were writing letters), and women also played musical instruments, as portrayed in Young Woman Seated at a Virginal and also in paintings by Gerrit Dou and Aert van der Neer. Dou and van der Neer may not be familiar names, but they were masters of genre painting. Their dazzling scenes of domestic life reflected the pride and prosperity of the nation: The Netherlands had just gained independence from Spain after 80 years of war, and peacetime brought stability and wealth.

Vermeer's 'Woman In Blue' Returns To D.C., Hoping For Better Luck This Time

"There was a great sense of pride of who they were," Wheelock says, "and that feeling of pride is evident in every single painting in this [exhibition]. ... A great sense of, 'We are a small country but look at what we have done.' "

The paintings show gorgeous fabrics, Oriental rugs, glimmering pearls and pets. Parrots shipped in from Africa and Asia are patted and fed by sweet ladies. The woman in Caspar Netscher's Woman Feeding a Parrot, with a Page (1666) is pretty and plump.

"She looks out at you very directly in a sort of come hither look," Wheelock says. "And the way she's holding the little biscuit for the parrot makes you wonder if there's something sexual underlying that gesture. We don't really know, but it is certainly possible."

Most of the painted women look as virginal as the keyboards they play, but there is one exception. In Brothel Scene (1659), Frans van Mieris (who's right up there with Vermeer in his mastery of light) painted a smiling maiden tipping her pewter pitcher toward a red-cloaked soldier. 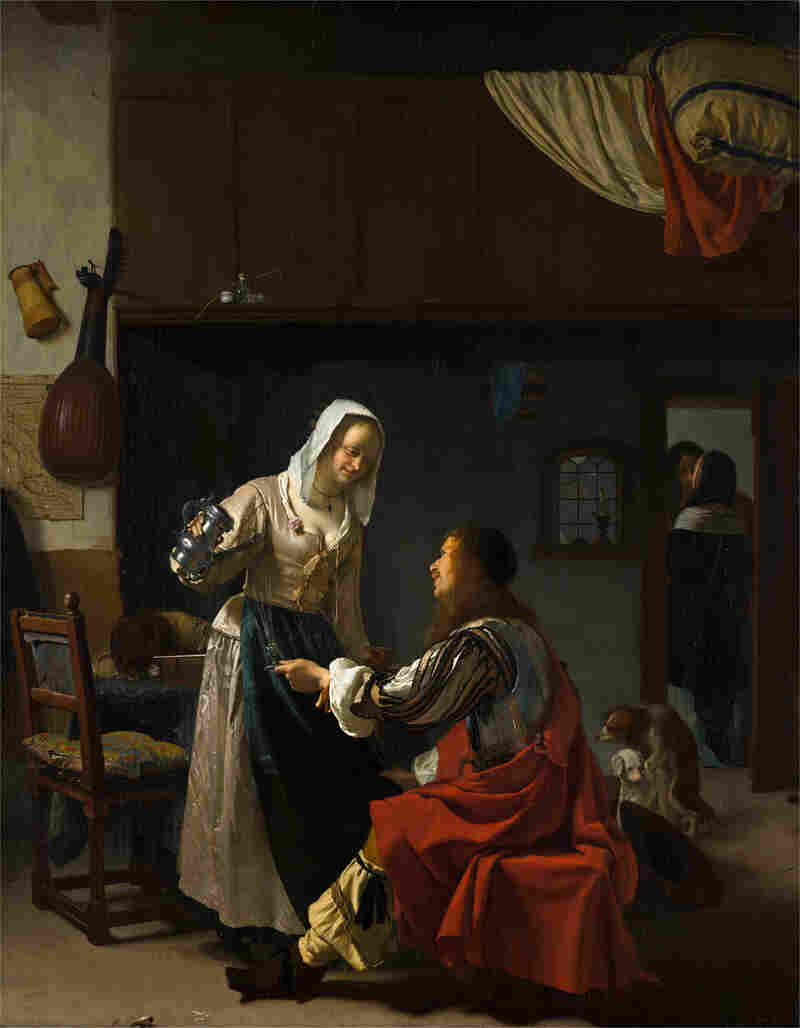 Even the dogs in Frans van Mieris' Brothel Scene (1659) are on message. Mauritshuis, The Hague hide caption 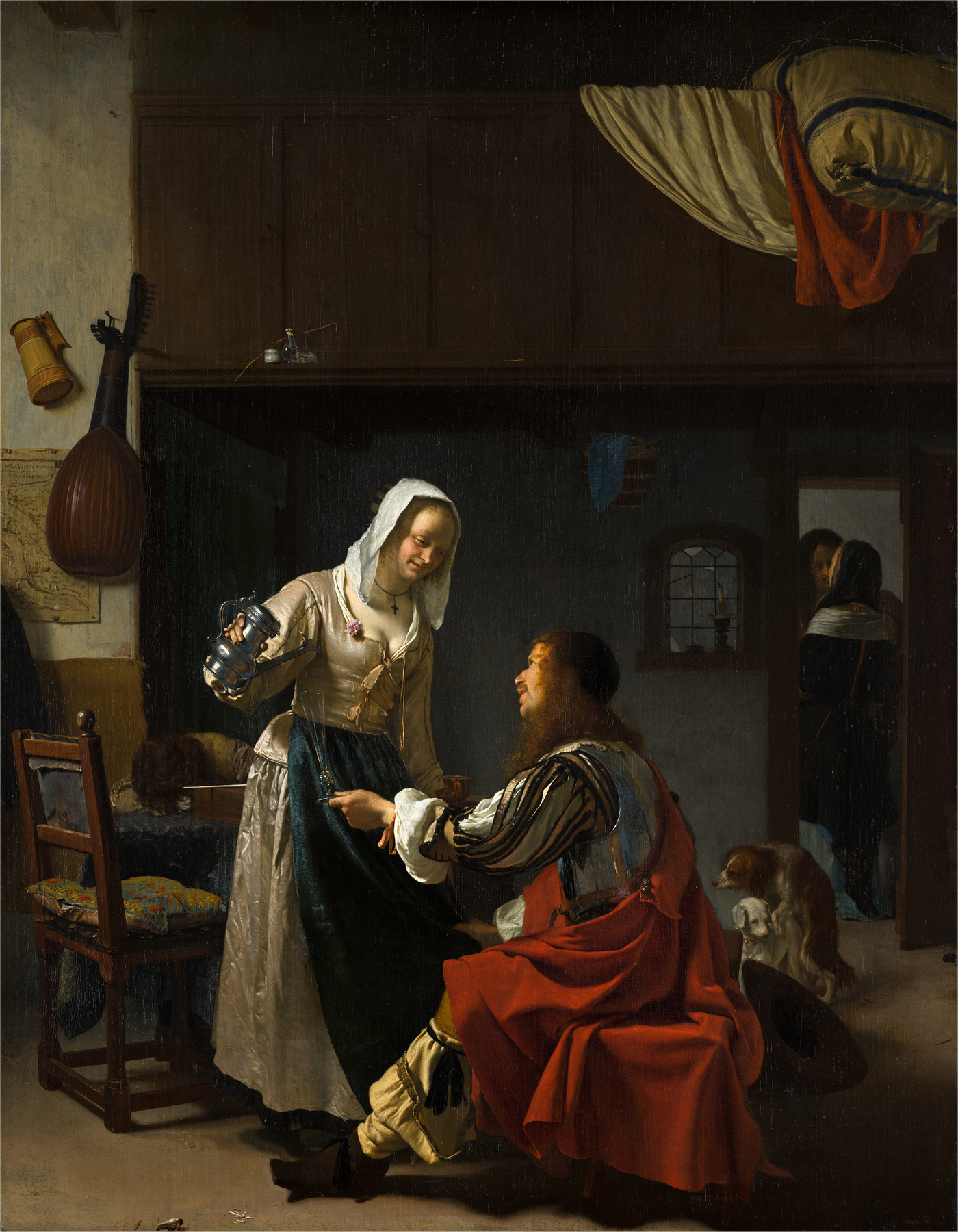 Even the dogs in Frans van Mieris' Brothel Scene (1659) are on message.

"He's grabbing her apron to pull her towards him," Wheelock says. "She's pouring a glass of wine. There [is] bedding up above, there's a couple in the back room and there are a couple dogs that really make sure that you understand what kind of scene this is. ... They're at it."

Dogs appear in plenty of these paintings (usually less passionately) and so do rugs and ermine-trimmed jackets. You wonder if carriages loaded up with these props were schlepped from Leiden to The Hague to Amsterdam to Delft and various painter's studios. Arthur Wheelock says some of the artists knew one another as teacher/student or drinking buddies, and they certainly knew one another's work.

"They were familiar," he says. "... There are very clear relationships."

The National Gallery exhibition shows just how many artists were at work in the Netherlands at that time. Among them all, Vermeer looms largest for his precision, the secrets in the faces he painted and the sheer beauty of his canvases.

"There's something that keeps these works so alive, because you come back to them," Wheelock says. "And every time you see them, they're somehow different."

Nicole Cohen adapted this story for the Web.