Accessibility links
Genetically Altered Skin Saves A Boy Dying Of A Rare Disease : Shots - Health News An inherited disease called epidermolysis bullosa destroyed the 7-year-old's skin. Scientists grew new skin in the lab without the genetic flaw, and replaced 80 percent of his skin. He is thriving. 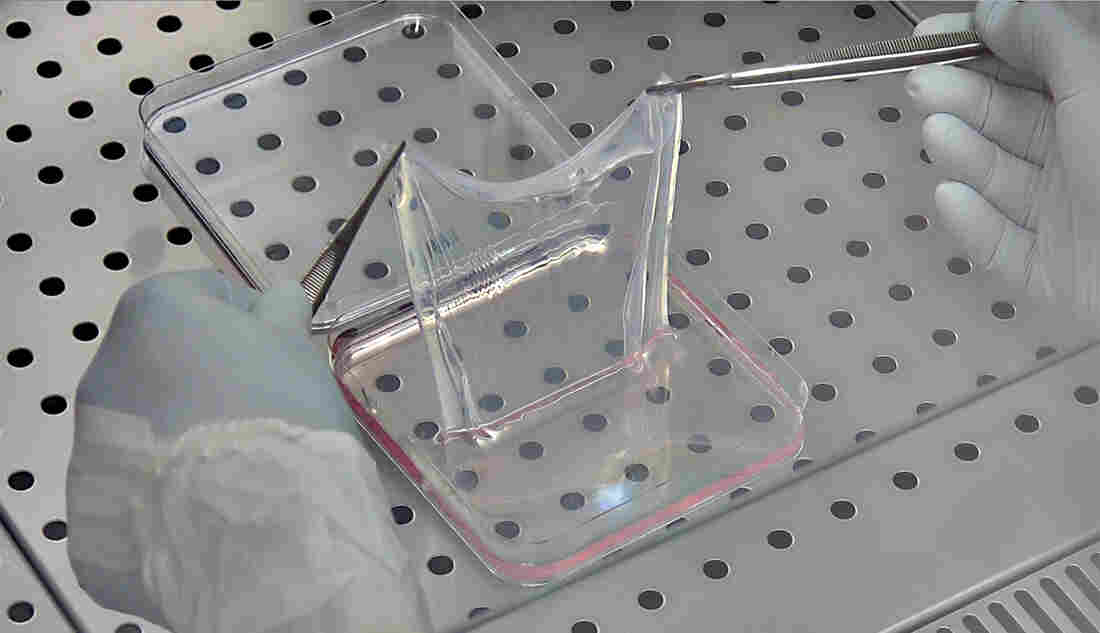 Researchers grew sheets of genetically altered skin cells in the lab and used them to treat a boy with life-threatening epidermolysis bullosa. CMR Unimore/Nature hide caption 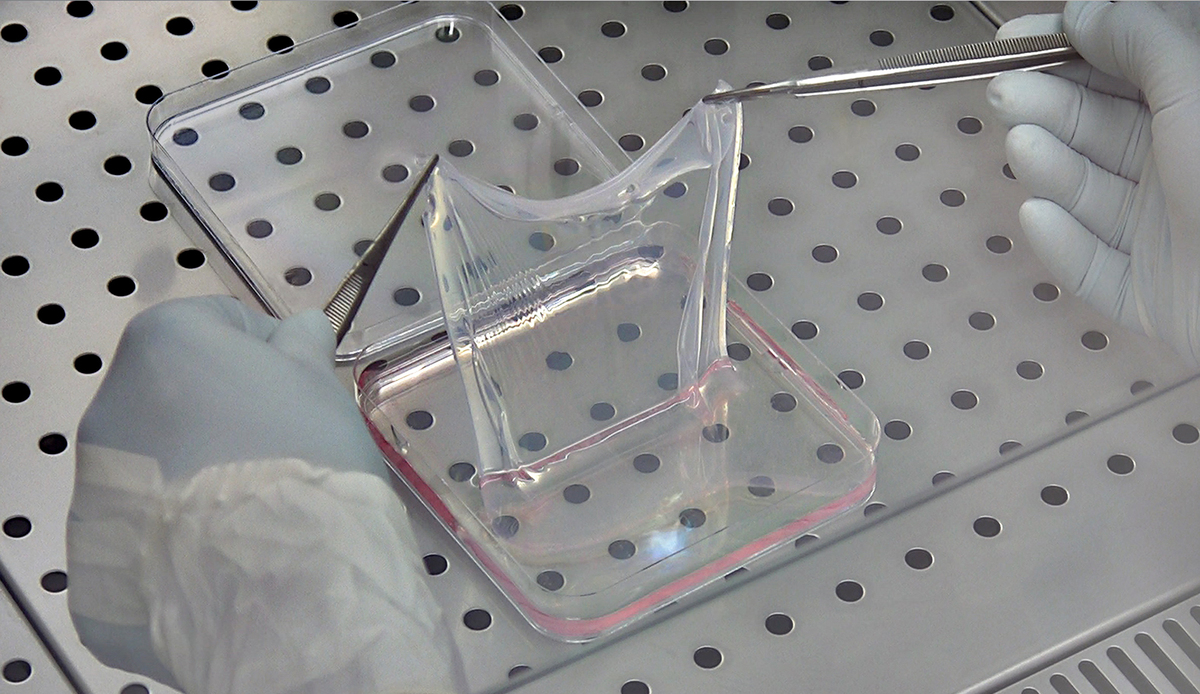 Researchers grew sheets of genetically altered skin cells in the lab and used them to treat a boy with life-threatening epidermolysis bullosa.

A child who was on the verge of death from a rare inherited disease has been treated with genetically engineered skin cells that replaced most of the skin on his body.

The treatment represents a notable success for the field of gene therapy, which has suffered many setbacks. And it's potentially good news for children suffering from a painful and often deadly skin condition called epidermolysis bullosa.

In this disease, children are born with a flawed gene that prevents the outer layer of the skin, the epidermis, from binding to the inner layer. This can cause excruciating blisters to form all over these children's bodies.

In the case in Europe, a 7-year old boy ended up in the hospital back in 2015 after 60 percent of his epidermis had sloughed off. Tobias Rothoeft, a surgeon at a burn unit at Ruhr University in Bochum, Germany, says he and his colleagues tried everything — including a skin transplant from the boy's father — to no avail.

"After nearly two months we were absolutely sure there was nothing we could do for this kid and that he would die," Rothoeft said in a telephone news conference hosted by Nature, which published the study online Wednesday.

Rothoeft and his colleagues took one last look around the medical literature and learned of researchers in Italy who were experimenting with a new treatment for this disease. Michele De Luca and colleagues at the University of Modena and Reggio Emilia were genetically engineering skin cells to repair the inborn flaw.

De Luca used a virus to insert a healthy gene into cells taken from the boy's skin. Some of those cells, stem cells, multiply indefinitely. So De Luca was able to grow entire sheets of engineered epidermis, which were shipped to the hospital in Germany.

De Luca had used this procedure successfully in 2006 to replace a relatively small patch of skin on another patient. But this boy needed to have 80 percent of his skin replaced with grafts of this genetically modified material. It took two operations, both in the fall of 2015.

"In the first one, we grafted all four limbs," De Luca told reporters in the press call. "In the second operation we grafted the remaining part of the body, mainly the back."

After eight months in the intensive care unit, the boy was well enough to go home. And, two years later, he is in school, even playing soccer.

"The kid is doing quite well," Rothoeft said. "The skin is of good quality, it doesn't need any ointments or stuff like that. It's perfectly smooth and it is quite stable. And if he gets any bruises, they just heal like bruises in every other kid."

One lingering question is the concern that gene therapies like this, involving viruses, can increase the risk of cancer. That's because the viruses insert the new gene randomly into human DNA. An attempt at using gene therapy to treat severe combined immuneodeficiency (SCID) in 2002 ended up triggering cancer in some patients.

That bad result set back the field of gene therapy, though there have since been successes treating SCID, and most recently, cancer.

"Certainly it is a potential problem," De Luca said. But he generated hundreds of millions of cells during this procedure and didn't see anything of concern. And in this case, clearly the benefits of treating the boy outweighed the risks.

News of this is just starting to trickle out to advocates who have children with epidermolysis bullosa.

"I think it's groundbreaking," says Brett Kopelan, who heads a U.S. organization focused on this disease, known by its acronym, debra. "I think it's incredibly exciting."

His 10-year-old daughter Rafi has a severe case. 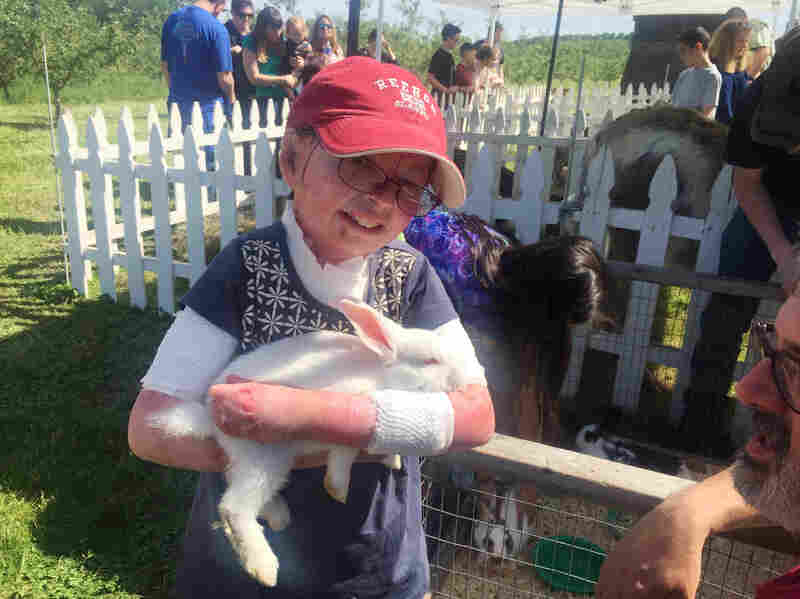 Rafi Kopelan, 10, has epidermolysis bullosa, which causes painful blisters of the skin and mucous membranes. Her father, Brett, is at right. Courtesy of Brett Kopelan hide caption 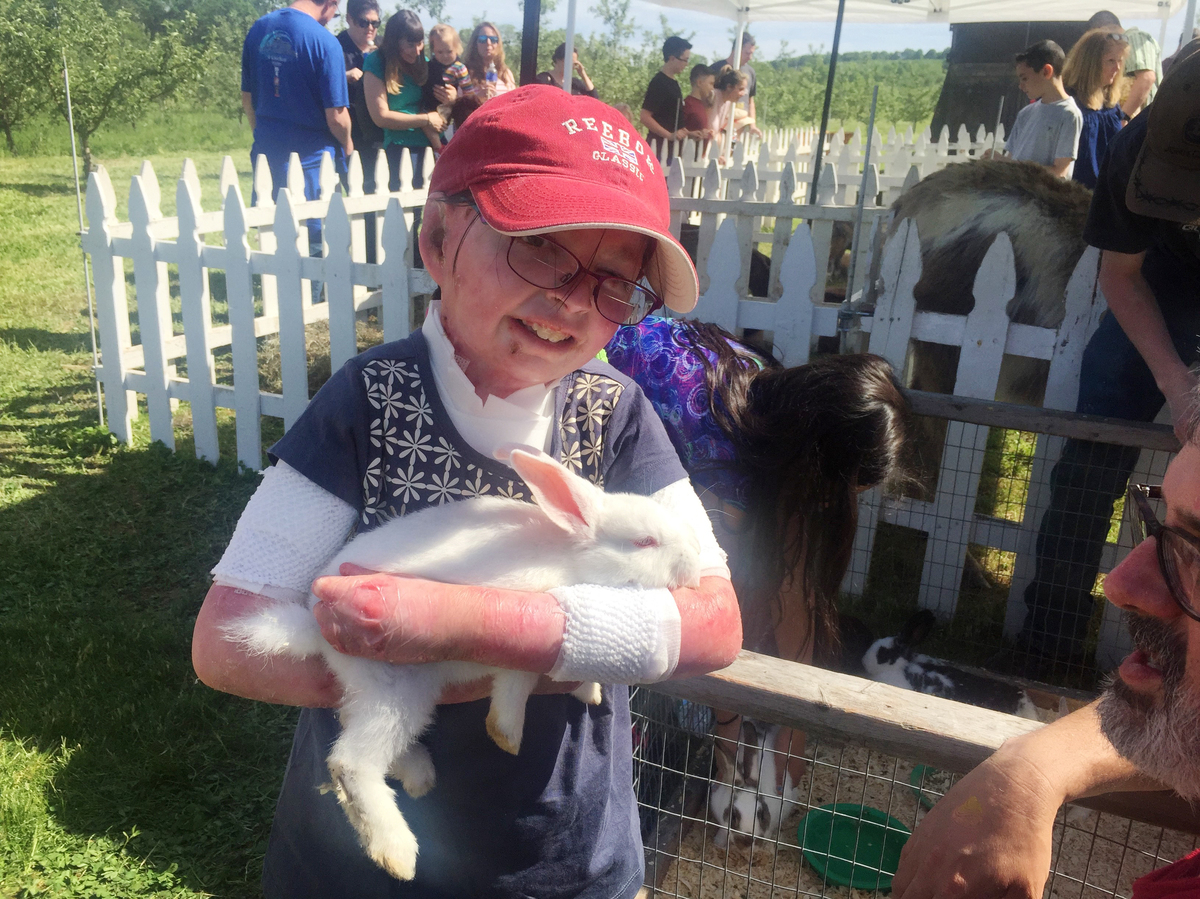 Rafi Kopelan, 10, has epidermolysis bullosa, which causes painful blisters of the skin and mucous membranes. Her father, Brett, is at right.

"Imagine the last time you had a paper cut and you put some Purell on it and it stung, right?" Kopelan says. "Now imagine that being 60 percent of your body.

"When you have to do a bath and bandage change every day, you are subjected to severe torture. It's incredibly painful, and it can take up to 3 to 4 hours a day," he says. "As a parent, there's not a day that goes by that a little bit of my heart doesn't break.

"Yet Rafi, knowing that it's going to be an incredibly painful couple of hours, walks into the bath and bandage room ... so that we can clean her wounds to make sure they don't get infected and to prevent a potentially life-threatening situation.

"She's the bravest person I know."

In addition to the painful blisters, Rafi needs frequent throat surgeries, because her condition also affects mucous membranes. She often uses a wheelchair because it's so painful to walk.

"My daughter would love to be able to not have to wear bandages on a daily basis, she'd love to jump in a pool without worrying about it hurting, or taking a shower — or even wearing shoes."

The skin therapy described in the Nature paper wouldn't cure her — in fact, it targets a different genetic defect that causes the same condition. But a similar approach could reduce the agony of daily living. And Kopelan says medical interest in this disease is now growing rapidly.

"We've gone from zero biotechnology and pharmaceutical [companies] to like 12 companies, so we're really at an inflection point right now," he says.

Experimental treatments are getting under way in the United States and Asia, as well as in Europe. Peter Marinkovich, Jean Tang and colleagues at the Stanford University School of Medicine are using the same approach as De Luca, and they have treated seven children using smaller patches of skin.

Marinkovich tells Shots that their long-term goal is to treat a child's entire body, and the research is gradually laying the groundwork to do that. The severely injured child in Germany offered a unique opportunity to try that, and the encouraging results are generating more enthusiasm. "I was super impressed when I saw [the] results," Marinkovich says.