Accessibility links
'This Mortal Coil' Will Get You All Twisted Up Emily Suvada's debut novel — a high-tech young adult dystopia — is bursting with ideas (and exploding viruses). And while it might seem like a conventional thriller, it's got a twist to reckon with. 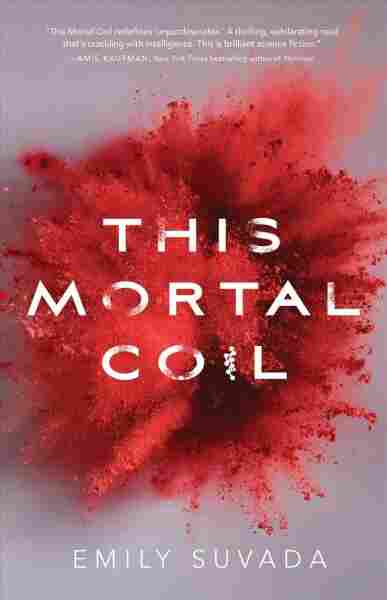 Emily Suvada's debut — a high-stakes, high-tech, near future dystopian young adult thriller complete with first-person present-tense, enemies-turned-friends, love triangle, and a cliffhanger every chapter — is that kind of book. Everything I knew about This Mortal Coil's fascinating premise led me to believe it wouldn't hew to genre conventions, staples and clichés — which meant I was disappointed when it seemed to, and then thoroughly blown away (as it were) when it ultimately didn't.

In the not-so-distant future, gene technology — gentech — allows people to program and hack their bodies, downloading vaccines, cures, hormones as easily as we download phone apps. But in the face of humanity's increased medical prowess, viruses have evolved to compete.

The resulting fine pink mist gets airborne and infects anyone within a mile radius — unless they've first immunized themselves by eating the flesh of the infected. In a neat reversal of the usual zombie-virus trope, the healthy have to eat the sick in order to stay alive — and keep eating them, because the immunity wears off after a few weeks.

But the virus is mutating: People are exploding more quickly and powerfully than ever, and the clock is ticking on the possibility of a vaccine. An organization called Cartaxus — "not the military, and not a corporation, but a massive international amalgam of technology and violence" — has ushered most of the world's uninfected population into underground bunkers, at the cost of any "nonstandard tech," meaning any open source apps that make up an individual's identity.

Better (?) Living Through Chemistry In 'Afterparty'

Enter Catarina Agatta, daughter of Lachlan Agatta, a brilliant geneticist who's been working on a vaccine. Forced to cooperate with Cartaxus at gunpoint, Lachlan tells Catarina to hide aboveground and never let Cartaxus take her. But Catarina's a brilliant geneticist too — albeit one hobbled by her body's inability to run the tech most other people can — and has been surviving on the surface for two years on her own, evading Cartaxus and reluctantly keeping herself immune to Hydra clouds.

That is, until a Cartaxus soldier named Cole turns up with a message from her father, telling them that they need to work together to unlock the vaccine while keeping it a secret from Cartaxus.

This Mortal Coil is a book bursting — as it were — with ideas, and Catarina's voice and perspective are compelling. I enjoyed reading gentech as a high-tech skin laid over a magic system, with snatches of code standing in for spells. But I often felt frustrated by the book's refusal to explore those ideas in favor of escalating the plot, which keeps a very tight, narrow focus on Catarina, who conveniently can't hack her body in the way most people can.

I was thrilled; I was shocked; I have so many questions. I want to know what happens next.

I kept wanting evidence of the philosophical and social implications of gentech — and a sense of who had to stay on the surface and who had to go into the bunkers. What happens to race, sex, and gender issues when people can change their bodies so thoroughly and so easily? There's a description of genehackers early on that says "they wanted to be ten feet tall, with prehensile tails and retractable claws" — what happens to society when people can turn themselves into weapons with a few lines of code? There's something fascinating about a world that raises questions about our shared humanity — only to decide that what makes us human is our vulnerability to a virus that turns us into bombs.

But this book didn't seem interested in any of that — until page 365 of 415, at which point I sat up and shouted at it for rewriting its own DNA, for twisting its helix so thoroughly that the first half felt like a false memory.

I'm left pretty staggered and uncertain how to feel about the whole thing — about a revelation that explodes my frustration with YA cliché as thoroughly as the Hydra virus explodes bodies. But this is only the first part of a trilogy, one that's upended its premise almost as completely as The Good Place did at the end of its first season. I can't help but want to know where Suvada goes from here — which is ultimately the only metric that really matters with a thriller. I was thrilled; I was shocked; I have so many questions. I want to know what happens next.