Accessibility links
Victims Of Sexual Assault, Harassment And Misconduct Speak Up From Hollywood to the media world, more people have decided to publicly name their alleged perpetrators, effectively turning the tables for victims who say they endured shame in silence. 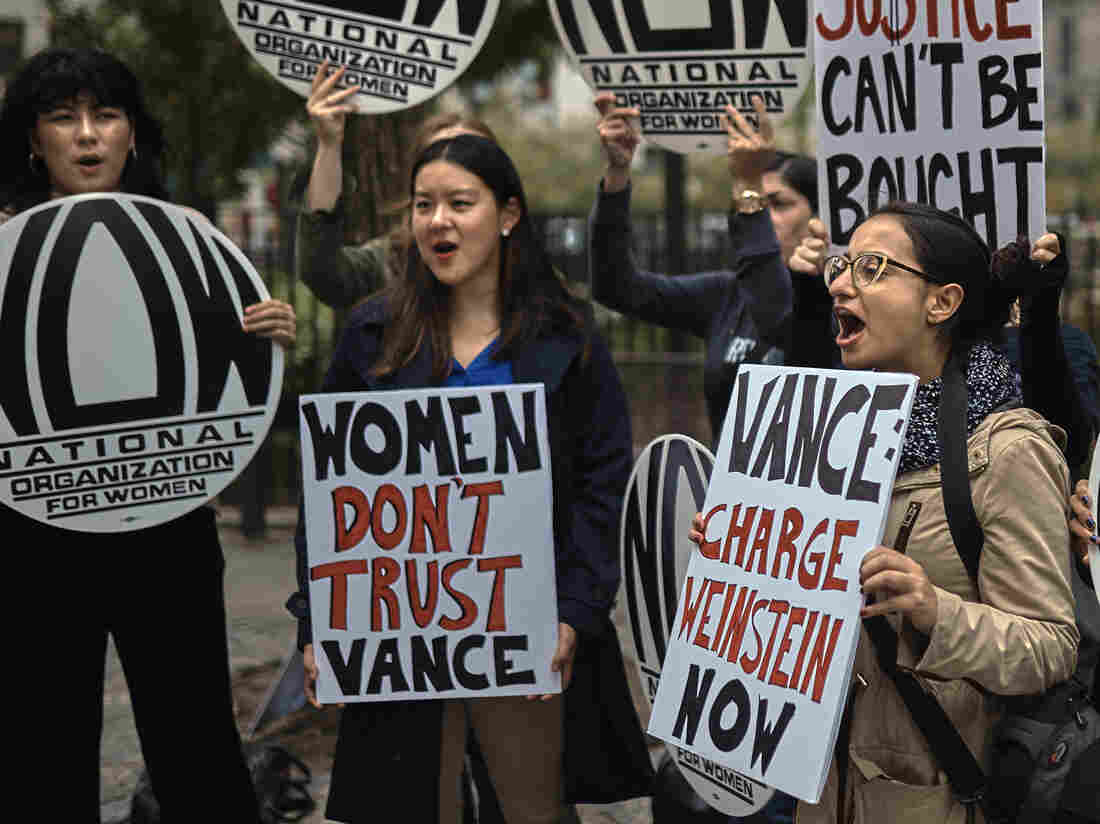 A group gathered outside the Manhattan District Attorney's office on Oct. 13 protests the DA's decision not to prosecute Harvey Weinstein in connection with a 2015 incident involving a model. Andres Kudacki/AP hide caption 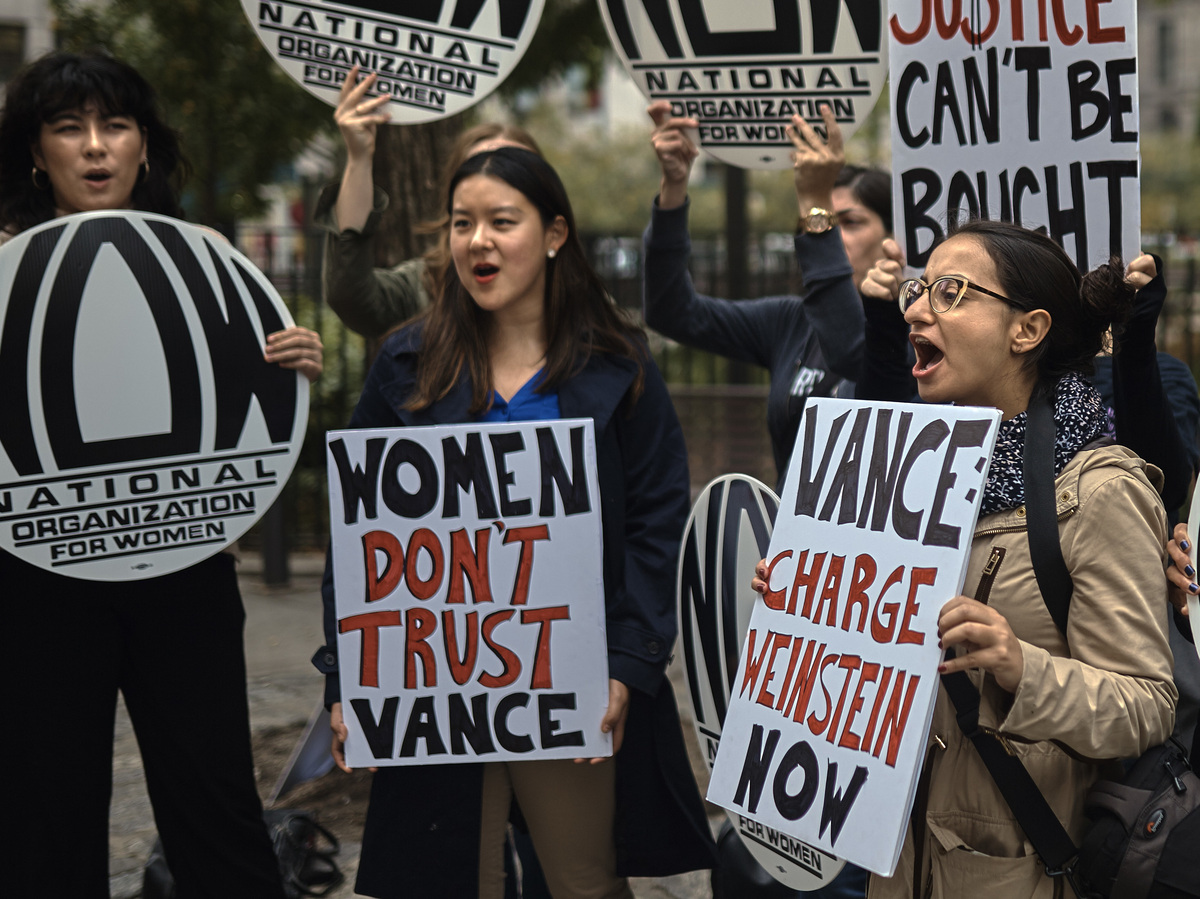 A group gathered outside the Manhattan District Attorney's office on Oct. 13 protests the DA's decision not to prosecute Harvey Weinstein in connection with a 2015 incident involving a model.

The experience of reporting sexual harassment has changed radically in a few weeks.

Widespread allegations of Hollywood mogul Harvey Weinstein's sexual misconduct touched off a torrent of other public allegations that are now toppling some powerful figures across many industries.

Now, many victims find themselves holding a very loud microphone.

That has been the case for Eden Rohatensky, a Montreal-based Web developer and musician who, until recently, dealt with workplace sexual harassment and assault alone.

"I didn't know what would happen to me if I did speak up," Rohatensky says. "There was no way for me to know. The more times that it happened, and there wasn't consequences, the more scared I became of speaking up."

Then, last month, Rohatensky posted an essay on the website Medium. Rohatensky's former employer, Vox Media, identified one of the accused as editorial director Lockhart Steele, who was then fired.

"I'm glad that it did happen, and that it's making an impact and it's helping other people. I don't regret that," Rohatensky says. "But it was surprising. It was very strange to have this type of closure in front of the world."

As more victims break their silence and discuss their allegations publicly, the power dynamic is shifting. Going public is a way of seeking redress by victims who — for whatever reason — lack faith in the normal institutional channels. And doing so has the effect of rapidly shifting the blame and shame to those who stand accused.

"I don't think of it as public shaming," says Jennifer Lawless, director of the Women & Politics Institute at American University. "I think of it as women calling out the men who behaved inappropriately and illegally."

For Lawless, this is a long-awaited moment. She recalls Anita Hill's famous testimony, decades ago, alleging sexual harassment by Clarence Thomas, during his Supreme Court confirmation.

Hill's account of sexual harassment was also a big public moment for many victims, Lawless says. But, she says, "It was easy for that to sort of die down and fade away, because in 1991 and 1992, we didn't have this instantaneous way of transmitting information."

Around that same time, in the early 1990s, Jaclyn Friedman was sexually assaulted when she was a college student. For her, going public meant etching her rapist's name on a list of "men to avoid" on a stall in the women's bathroom in hopes of warning others.

"It felt powerful; it felt like it was a thing I could do, and that maybe it was going to keep somebody safe," she says. "It felt like some tiny piece of power."

She says the outspoken victims of today are extending that "whisper network" to a wider circle. After the Weinstein allegations surfaced, a Google document listing names and allegations against media executives and others started making the rounds.

Friedman applauds that, but says she herself has yet to name her perpetrators online.

"I absolutely think it would feel empowering. It would also be terrifying. The reason I don't do it is because I expect that if I named either of them I would be sued," Friedman says.

And there are legal obstacles to making public accusations. Sexual misconduct is often hard to prove. People making accusations can be sued for libel, and so can those who repeat false allegations.

And plenty of victims still cannot speak publicly because they signed non-disclosure agreements.

Take Beth, a New York City woman who gave up her law career a decade ago, after her superior harassed her, then retaliated against her. She says she can't name her perpetrator because she signed a non-disclosure agreement as part of her three-month severance settlement.

"I want my name attached to it," she says. "And I want this guy shaking in his shoes. I want him to be scared, and I want the people at the firm who helped cover this whole thing up to be scared."

She says if she faced a similar situation today, she, too, would speak out.

In previous audio and Web versions of this story, we said people making accusations of sexual misconduct can be prosecuted for libel. The word "prosecute" is usually associated with criminal actions. We should have said sued for libel.