Accessibility links
For November, A Romance Trio For 'Hamilton' Fans (And The Rest Of You, Too) Even if you haven't seen the musical, you can keep warm this November with a delightful trio of novellas set in and around the battalion commanded by Alexander Hamilton at the siege of Yorktown. 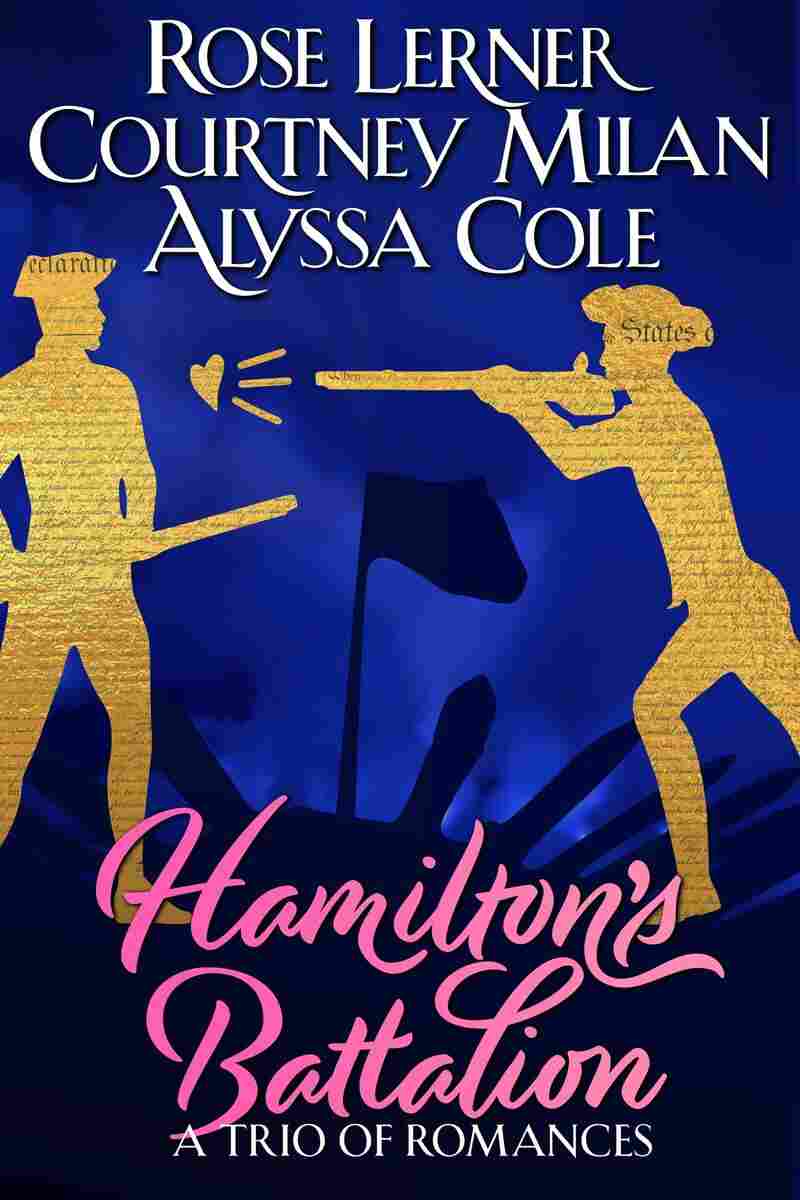 A Trio of Romances

It was only a matter of time before Hamilton mania invaded Romancelandia. Hamilton's Battalion — a new anthology from romance authors Courtney Milan, Rose Lerner and Alyssa Cole — features three novellas connected by Eliza Hamilton and her project to collect the stories of the soldiers who served in her husband's battalion at Yorktown. In the spirit of the musical, these novellas reflect the diversity of America today, though they set their stories during Hamilton's era. But true to the genre, the focus is always on the romantic relationship and a happy ever after.

In "Promised Land," Rose Lerner offers a classic romance pairing: A spy, and a heroine in soldier drag. Once upon a time, Nathan and Rachel were married — before she faked her death and ran off to join the army (as you do). They're unexpectedly reunited when Rachel recognizes the loyalist spy in their midst — it's Nathan, on a mission, and in possession of a secret that could ruin everything for her. This is a touching romance with plenty of humor — including Nathan talking his captors' ears off, and a scene in which Rachel enlists Hamilton himself to help prove to her fellow soldiers that she's a man. What sets "Promised Land" apart from other soldier/spy romances is the role the characters' Jewish faith plays in their relationship and worldview — both Nathan and Rachel are fighting for a new world where they can be Jewish and American.

In "The Pursuit Of..." by Courtney Milan, talkative English soldier Henry Latham tells Corporal — and freed slave — John Hunter that it's "a perfect night for a siege" as they fight it out hand-to-hand at the battle of Yorktown. But rather than fight to the death, John grants the Englishman a reprieve. Determined to return the favor, Henry joins John on his walk home to Rhode Island, and on the journey he talks and talks and talks some more (and tries to acquire a taste for some very pungent cheese). But a funny thing happens on the way: Henry's eyes are opened to the battles yet to be fought — and won — so that all people can be truly treated as equals. Meanwhile, John finally acquires a taste for both Henry and the godawful cheese he likes so much. And in defiance of those who say a happy-ever-after isn't realistic for gay lovers in historical romances, these two men find a way to be together, and a plausible pursuit of happiness.

Finally, in Alyssa Cole's novella, "That Could Be Enough," Mercy Alston – maid to Eliza Hamilton — has been burned by love one too many times, and as per that classic romance trope, has decided to Never Love Again. She keeps her passionate feelings under wraps, even as Eliza goes on and on about "my Hamilton" and especially when she has to listen to the bewitching Miss Andromeda Stiel relate her grandfather's story about fighting at Yorktown. That unfinished story means Mercy must keep calling on Andromeda at her dressmaking shop, listening to her talk and fighting her feelings of attraction. Andromeda, meanwhile, is busy opening Mercy's eyes and heart as they explore early 19th century New York City in a romance that will feel sweetly familiar to many readers, even if they haven't read a female-female love story before. A big misunderstanding nearly rips this couple apart — but they ultimately realize that love is indeed enough.