Accessibility links
Houston's Poor Planning And Breakneck Growth Played Big Roles In Flooding As researchers and engineers analyze the aftermath of Hurricane Harvey, it's becoming clear that Houston's runaway development had a big role to play in flooding. 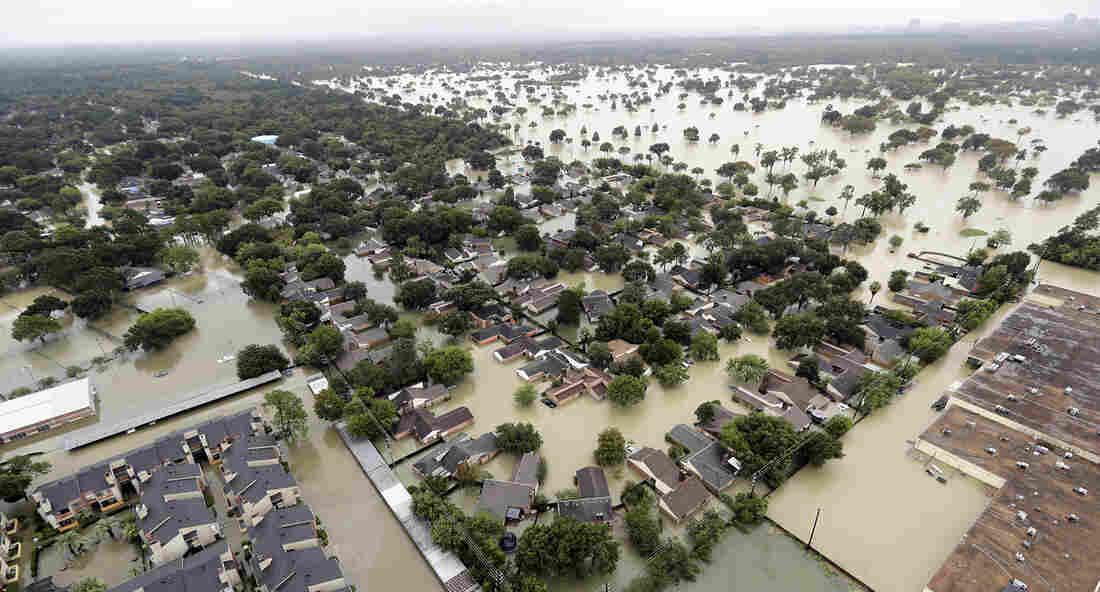 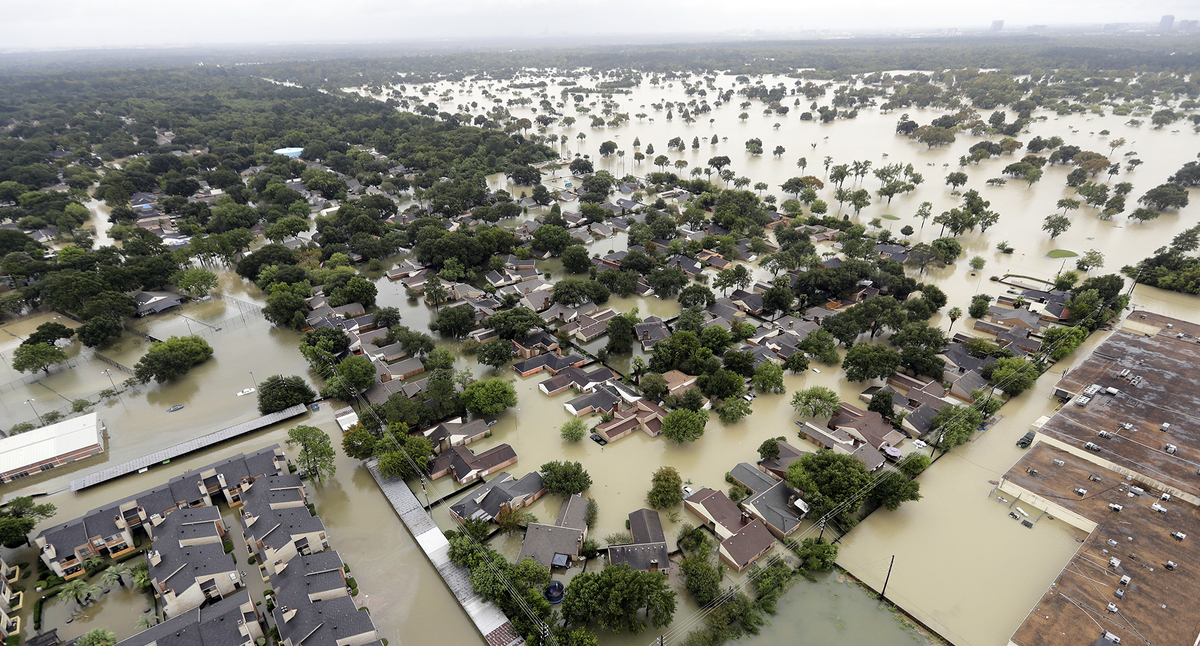 Hurricane Harvey dropped record rainfall on Houston neighborhoods like this one, near Addicks Reservoir.

Hurricane Harvey was the worst flood in Houston's history. Scientists and citizens are still piecing together why it was so bad, but it's becoming clear that a lot of the damage comes down to how people have built America's fourth-largest city.

You can see the problem from your car. Houston is a sprawling web of strip malls and 10-lane freeways.

Hydrologist Jeff East stands under one of those freeways, beneath an overpass and above the east fork of the San Jacinto River. The river is more like a trickling stream, 20 feet below. But East points to a line of seeds and debris in the grass by the highway. "Actually there's a high water mark over here," he says.

Debris left at the high-water mark is like a bathtub ring around Harris County. Along with gauges in the San Jacinto River, it shows flood levels never seen before. "This is the highest that it's been since we've been gauging the site since the 1940s," East says.

The San Jacinto is a perfect example of what went wrong. Normally it's pretty tame; the flow is about 30 cubic feet per second (a cubic foot is about enough to fill four basketballs). But during Harvey, the river was running at 80,000 cubic feet of water per second — headed south toward the city.

The San Jacinto is just one of many streams and rivers that flow into Houston. The city is kind of like a drain in a huge bathtub. People have known that for years. In the 1940s, after huge floods, the city tried to stop the water before it reached Houston. Engineers built two reservoirs, called Addicks and Barker.

Richard Hyde used to live near Addicks reservoir. Hyde's a retired petroleum geologist. He says that during Harvey, his house filled up fast. "I took a look out back and the reservoir was coming up on the back deck and heading for the sliding door window," he recalls. He got out when it reached the electrical outlets in his house. "I got 6 feet of water in the house," he says.

In the apartment he's living in now, he shows me a map of the area from the 1970s. To the west it's prairie and rice fields, the kind of land that soaks up rain. In a current map, it's now paved — houses, shopping malls, roads. That pushes more water into Houston. 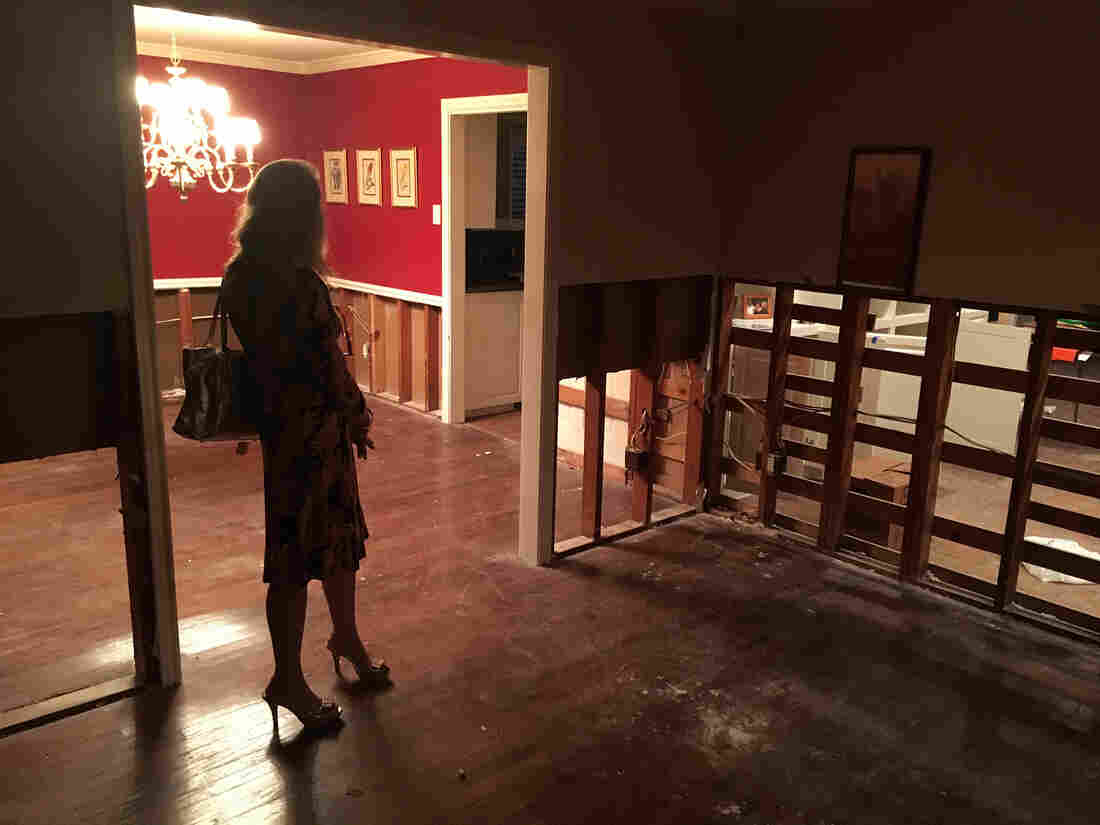 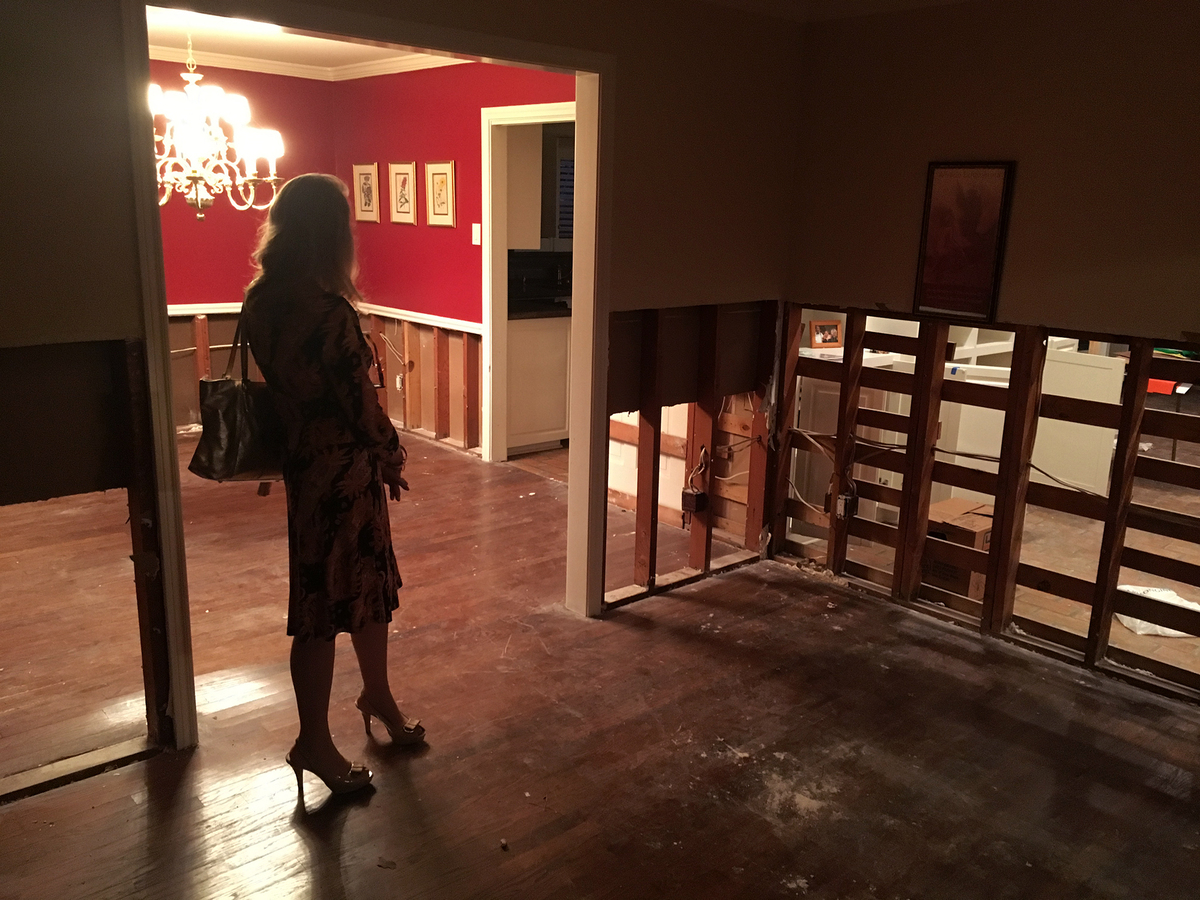 Years ago, there was talk of building a third reservoir. "They did not build the third reservoir, which was so badly needed. They built houses," says Hyde. "Houses get tax money and reservoirs don't."

At Harvey's peak, the reservoirs couldn't handle the water. Engineers opened spillways and water shot downstream toward the city through concrete-lined bayous. Runoff from paved roads and neighborhoods ran into the bayous as well.

One of those, Brays Bayou, flooded a neighborhood called Meyerland. It's upscale, but that didn't protect it. Ruined drywall and carpeting remains piled on the sidewalks.

Mary and Randy Wilkins' house is two blocks from the Bayou. "It's a wreck," says Mary Wilkins. Fans are running, big industrial size ones, drying out the mildewed walls — or what's left of them. They're gone up to chest height; it's just wooden studs. Most of the furniture is gone. "That couch was like floating throughout the house," she says.

"Every year," adds Mary Wilkins. "It just blows my mind." They say Harvey was the worst flood by far. Mary Wilkins blames overdevelopment outside the city. "They've just let them build without accounting for how their drainage was going to be addressed," she says, "so it just keeps coming downstream ... from rice field to concrete, where's the water going to go?" The Wilkinses have rebuilt twice before after floods; this time they're selling it for whatever they can get.

Sam Brody, a flood scientist at Texas A&M University, says Houston has grown to a size where it can't handle these kinds of record rainfalls. "We're piling in people with roads and rooftops and parking lots into these low-lying coastal areas and exacerbating these problems," he says. "And that is an urban, human development, built-environment problem."

You can't move Houston. So what's to be done? Officials are now talking about building that third reservoir and demolishing houses that repeatedly flood.

Brody's team is advising those officials. He says the city needs more radical changes, like requiring new homes to be built 3 feet above flood level. He says yes, preparing for future floods will be expensive — but cheaper than paying up after the next one.