Accessibility links
In 'Wonder Valley,' There's More Than One Los Angeles Ivy Pochoda's latest was informed by creative writing classes she teaches on L.A.'s Skid Row. "My L.A. experience, it was a little bit different, and I think the book sort of reflects that," she says. 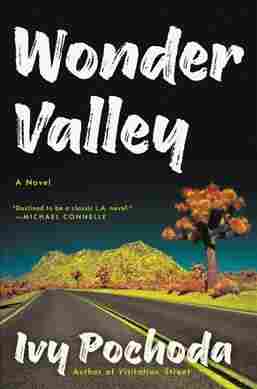 Ivy Pochoda begins her new novel almost like she's trying to break up the ho-hum of an everyday morning: In the middle of downtown traffic, there's a man jogging, without a care, through Los Angeles' crazy maze of freeways. And, oh yeah, he's totally naked. "He's just completely antithetical to everything that I imagine a morning commuter is up against," Pochoda says. "He's free, he's bucking the rules, and he's moving."

Pochoda's novel is called Wonder Valley, and it follows several different characters who all connect back to that mystery man on the freeway.

Much of the action takes place in downtown L.A. That's where one of the characters, a kid named Ren, is desperately trying to find his mom, who's in a part of the city known as Skid Row. "It's both a pretty grim environment," Pochoda says, "but also one that has a sense of community that I think is not apparent to the naked eye when you're walking around down there."

On her own relationship to Skid Row

Skid Row is between downtown, which is gentrifying very quickly, and the arts district, and it's sort of this, you know, border that you have to cross if you're going between the two neighborhoods ... I was commuting through Skid Row on a regular basis.

On the possible tension of intruding on the homeless community

I'm not exactly sure I felt a tension. I felt sort of aware that I was intruding. But I eventually started teaching creative writing in Skid Row, which is how I got a lot more involved in the community, and I became aware that, you know, it's not just this random assortment of tents and, you know, people living on the street haphazardly. There is a structure there. So, I guess the idea of coming up and saying hello and interacting is — it's a little strange because that's like going to someone's house and saying, you know, "How are you doing?"

People have, you know, beds in their tents and, you know, cooking equipment, so it is definitely someone's private property.

On what she's learned from her students

Well, what I learned is really that, you know, there's so many different types of homelessness, and I think that, you know, people assume one thing, that there's sort of this level of desperation and helplessness, whereas, lots of people that I've come into contact with who are in the workshop are, you know, you wouldn't necessarily assume that they're homeless. They're college students, or they have jobs or formerly employed, and I think that we put a pretty conventional face on homelessness when we think about it, but I've learned that you can't take anything for granted.

There's a woman in my workshop who described the plot of Ulysses to me, and at first I thought she must be kidding, and then I realized she read it and she loved it and she told me that sometimes she dreams that she's been to Ireland but can't remember why, and it's because she has read Ulysses.

Well that's actually something I overheard in my workshop, and what I think she's saying is that no matter how little you have — and a lot of these people have nothing, they have, you know, whatever fits in a backpack or shopping cart or a tent — no matter what you have, you'll always have your story. That is your sense of identity and that's what keeps you true to yourself, and as long as you can remember your story and stick by your story, and then in my workshop write your story, you can retain a sense of dignity, a sense of purpose, a sense of being and belonging.

And people will try to steal that story from you. There is always a narrative being written into Skid Row, but members of the community have to hold onto their stories or else they're going to lose their sense of identity, and the last possible thing that could belong to them properly.

This story was produced for radio by Danny Hajek and edited by Shannon Rhoades, and adapted for the Web by Sydnee Monday and Petra Mayer.