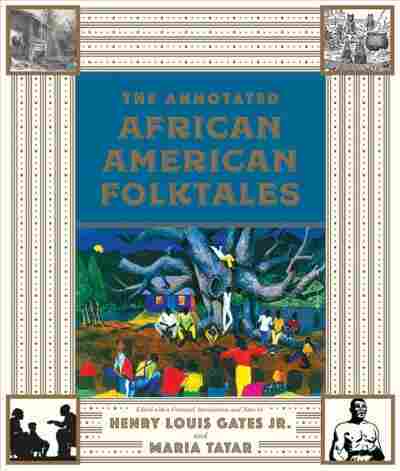 Browsing through a weighty new anthology called The Annotated African American Folk Tales is a journey across space and time. In one chapter called "Defiance and Desire," there's a section devoted to flying Africans, where there's a lyric that I was familiar with from a song Paul Robeson recorded many years ago — "All God's Chillun Got Wings."

There were also folktales told by slaves of newly arrived Africans — who, unlike the slaves, had not yet lost the ability to fly; stories of Africans who escaped slavery by flying back to Africa. The anthology is edited by two Harvard professors: Henry Louis Gates, Jr., and Maria Tatar.

"[These folktales] have that magical quality," Tatar says. "They give us mysteries wrapped in enigmas inside riddles. We have to respond to them. We have to figure them out."

On the importance of flying Africans in folktales

Gates: The relationship between flying, freedom, and death is one of the curious things about the African-American oral tradition, that you would fly away, as Paul Robeson just so beautifully sang, but you fly away after death to heaven. You know, it wasn't a kind of magic carpet when you go to another world and then return to your previous life. It was a transition in the literal sense of going from one realm of existence to another, and these stories are told with an enormous amount of admiration and respect, but also it's a musing about a form of suicide — that it was better to will yourself back home to Africa, will yourself back to the other side of the Atlantic, than to live the social death of human bondage here in the United States.

A 'Portable' Overview Of A Complex, Compelling History

Gates: Joel Chandler Harris did an enormous service. We can debate the fact that, well, he certainly wasn't a black man, and we could debate what his motivation was, and we can wonder, did African-Americans receive any percentage or share of the enormous profit that he made? The answer is absolutely not. But on the other hand, a lot of these tales would have been lost without Joel Chandler Harris.

Tatar: I was going to present the counter argument that is, did he kill African-American folklore? Because after all, if you look at the framed narrative, who is Uncle Remus telling the stories to? A little white boy, and so suddenly this entire tradition has been appropriated for white audiences, and made charming rather than subversive and perilous, dangerous — stories that could be told only at nighttime when the masters were not listening.

Gates: But think about it this way: It came into my parlor, it came into my bedroom, through the lips of a black man, my father, who would have us read the Uncle Remus tales but within a whole different context, and my father, can we say, re-breathed blackness into those folktales. So it's a very complicated legacy.

It's like links in a chain, and these chains go back hundreds of years from, starting today, back through the written tradition, crossing over to the oral tradition. And ... our job is to put them in a form in which they can be consumed by a whole new generation.

On the continued legacy of these folktales

Gates: It's like links in a chain, and these chains go back hundreds of years from, starting today, back through the written tradition, crossing over to the oral tradition. And our job, people like us, people like Maria and me, our job is to put them in a form in which they can be consumed by a whole new generation.

Tatar: I see these stories as a way of listening to the ancestry, as Toni Morrison would put it. And then I hope that this book will be a platform for making the stories new, making them our own again.

Gates: And that's precisely why we have two sets of dedications, Maria's and mine. And my dedication says "This volume is dedicated to Eleanor Margaret Gates-Hatley: L'dor va'dor," meaning generation to generation. That's my three-year-old granddaughter, and I want these tales to be hers just like my father made these tales mine.

This story was edited for radio by Fatma Tanis and Emily Kopp, and adapted for the Web by Sydnee Monday and Petra Mayer.