Accessibility links
Paul Hollywood Recounts His 'Baker's Life,' From Ginger Biscuits To Fancy Cakes Paul Hollywood shot to fame as the gimlet-eyed judge on the Great British Bake-Off. His new book is a memoir in recipes, beginning with childhood favorites and ending with special-occasion bakes. 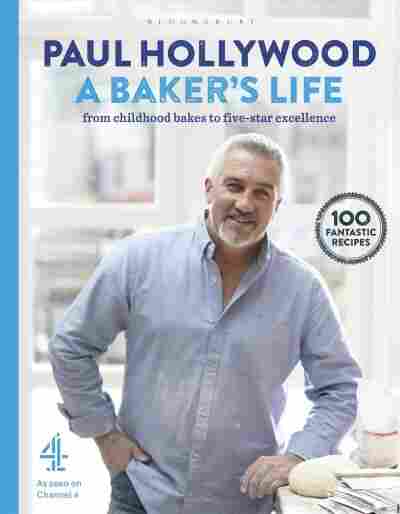 From Childhood Bakes to Five-Star Excellence

Paul Hollywood is all about the bake. He grew up in a flat that always smelled of bread, above his father's bakery in Merseyside; became a baker in his teens, then head baker at five-star London hotels, then off to resorts in Cyprus, and ultimately became a judge — the one with a twinkle in his piercing blue eyes — on The Great British Bake Off. His new book is Paul Hollywood: A Baker's Life.

He says he didn't start out to be a baker — initially, he followed in his mother's footsteps and studied sculpture at art school. "I did that for a couple of years, and it was only then that I thought, hang on, I need to earn some money. And my dad had a chain of bakeries, so I did speak to him," Hollywood says. "I had long hair at the time, I remember, I was about 18, and he said, I'll give you 500 pounds — which was quite a lot of money in the '80s — if you got your hair cut to join the family business. And that's exactly what I did."

On what he likes about baking

I quite liked the early morning work. ... And it was lovely looking back on the bakery, and looking at all the croissants and the afternoon tea, the breads, and looking at everything you've made, and thought, do you know what? I'm proud of that. And actually, when I used to go home at about midday to sleep, everyone was in work still, so it was very quiet. So I liked the fact that I was almost like a bat, you know, a vampire bat, coming out purely at night and disappearing when the sun came up.

On the importance of touch

The Bun Also Rises: Why We Love 'The Great British Baking Show'

Ready, Set, Flake: Is 'Bake Off' About To Crumble?

In this world of health and safety ... they try to encourage the bakers to wear gloves, rubber gloves when you're kneading bread. I mean, what? This is one of the oldest traditions in the world, and to get bakers to wrap up their hands so they can't feel the dough — it's that touch that you cannot teach, it's something that you have to practice, practice, practice and get used to. And once you have that touch, you can make anything.

On his mother's ginger biscuits

The thing about those ginger biscuits is, it was very early. I must've been 6, possibly 7 years old, and my mum used to make them quite a lot, actually, mainly over the weekend. But they were so delicious. A bit cookielike, and what I mean by that is, there's syrup in there so it bakes fairly quickly, leaving moisture. So when you cook this mixture out in a pan — which is what you do — so you heat it up, and then you roll the little balls in your hand, flatten them down, bake them off, and they're absolutely delicious. ... They really were the first time I ever baked. ... And that, with a cup of tea, is difficult to beat.