Accessibility links
In New Novel, 'Martian' Author Andy Weir Builds A Colony On The Moon Artemis imagines the first moon settlement as a mining town and tourist trap. "I had a lot of fun doing the world building," Weir says. 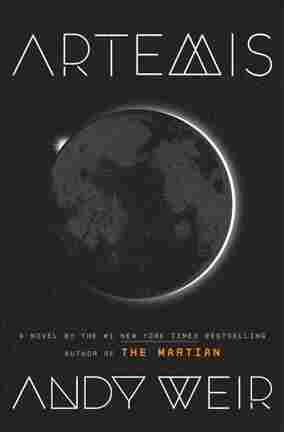 Life on the moon is no bed of roses. The coffee is weak (because water boils at a low temperature) and the food is rank (because it's hard to grow much more than algae).

The first human colony on the moon, Artemis, is essentially a small, frontier mining town and tourist trap. It's a place that attracts misfits who hope to strike it rich, including a young woman who grew up there named Jazz.

That's the premise of Andy Weir's second novel, Artemis. (The former software engineer struck it rich with his first novel, The Martian.) Weir says he modeled his moon colony after tourist towns in the Caribbean. "The money comes into the system through tourism mainly. ... You have the really ritzy, nice, high-class hotels in one part of town, and then the more, shall we say, austere living conditions of the people who live and work there."

On Jazz, who was born in Saudi Arabia but considers herself to be a citizen of the moon

I've seen this a lot with friends who are first-generation Americans, where you see the parents have the, kind of, original social norms and belief systems of the kind of mother country, and then the kids grow up and they end up completely Americanized and part of our culture. Jazz is the same thing. She and her father moved to Artemis when she was just 6 years old, and so she's grown up there and she considers herself an Artemisian. She is a citizen of Saudi Arabia, but she doesn't have much connection to the kingdom.

On where he got the idea for Artemis

I wanted to write a story that took place in the first city that was not on Earth. And I thought about Mars, I thought about lower Earth orbit, but the Moon is the obvious place to build it. If you were on a football field and you were standing at one goal line, and if Mars were at the other goal line, the moon would be 4 inches in front of you. So that is the distance scale between them. So, yeah, colonizing Mars before you colonize the moon would be like if the ancient Britons colonized North America before they colonized Wales.

On the world building process for Artemis

I did make a map. But really, cities are always formed via economics, and so I started with that. And I said: Alright, so I want to build a city on the moon. There is enough demand for tourism on the moon that it would be viable. So let's start with how do I build a city at all on the moon? Well, I don't want to transport everything there; I want to make it out of local materials. So if I'm gonna do that, well, what materials do I want to make it out of? Some research shows that there's a mineral on the moon called anorthite, which is extremely plentiful and you can just pick it up off the surface — you don't even need to dig for it. So I'm like, OK, the first thing you need to do is have a refinery, a smelting facility to turn ore into metal and oxygen. And then you build the city out of that metal. But smelting minerals takes an enormous amount of power, way more than you could ever hope to get with solar. So I'm like, alright, then we're gonna need some reactors. OK, so put some reactors on the moon.

How 'The Martian' Became A Science Love Story

And I worked forward from there. And yeah, I had a lot of fun doing the world building. That part's always fun on a book. The hard part is those pesky characters and plot and narration and stuff.

On the first book he wrote right after The Martian

So [publisher] Crown was like, "Alright, what do you want for your next book?" And I had already been a little bit into a book called Zhek. And I said, "Well, this! This is what I'm working on." They're like, "Good! Deal. Here, sign this contract. There, have it done in a year. Bye."

So I got about 70,000 words in and I just realized it wasn't good. It wasn't any good. And so, it was a very difficult decision, but I asked the publisher, I was like, "Hey, I don't think this is working. I want to write a completely different book. I want to start over with a completely different book. Is that OK?" And they're like, "Um, OK. But we're gonna want to hear about the next book first." And so I pitched them Artemis, and I'm so glad that I made that decision. It was really painful at the time, but I'm so glad I made the decision. Artemis is so much better than Zhek could have been.

Eric McDaniel, Sophia Schmidt and Ed McNulty produced and edited this interview for broadcast. Nicole Cohen adapted it for the Web.