Accessibility links
Former President Barack Obama Reported For Jury Duty, And Was Dismissed Barack Obama reported for jury duty in Cook County and was dismissed. NPR's Scott Simon says the fact that former presidents show up for jury duty says something vital about the political system. 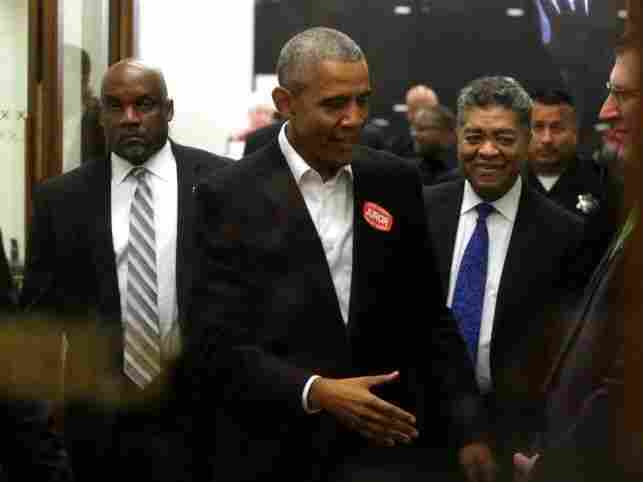 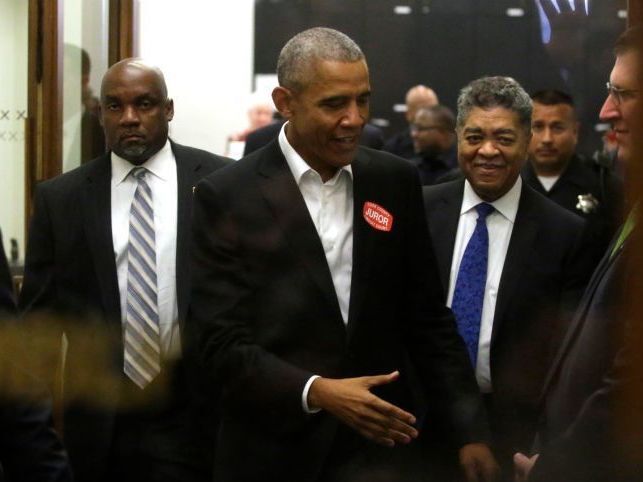 Former President Barack Obama extends his hand as he attends Cook County jury duty at the Daley Center on Wednesday in Chicago.

A retired government employee reported for jury duty this week. He seemed conspicuously qualified: editor of the Harvard Law Review, University of Chicago professor, even a Nobel Prize winner.

But Barack Obama was dismissed from jury duty, with the thanks of the Cook County Circuit Court. He'll be sent a check for $17.20 for his time, which a spokeswoman says he will return.

That might make Obama the first Chicago politician to ever return money.

According to reports, the former president shook hands all around and signed books for several of his 168 fellow jurors. "This looks like Chicago!" he told them. Sonal Joshi, a court clerk, told reporters, "He's gorgeous!"

Maybe it was the red JUROR sticker Mr. Obama put on his lapel.

Obama was dismissed from the jury pool, along with about half of the other jurors, by a random draw before lunch time.

Former President George W. Bush reported for jury duty in Dallas in 2015, and former President Bill Clinton was called to serve in New York in 2003. They were quickly dismissed, too, but made the point that they were ready to do their civic duty.

Cook County Chief Judge Timothy Evans said, "If the former president of the United States takes his time to come, anybody ought to be willing to come."

Any attorney or judge would have qualms about putting a former president on a jury — especially in his hometown, where he won 84 percent of the vote and schools are named for him. It might make what's supposed to be a jury of 12 citizens into "a jury of one," as Scott Turow, the novelist and lawyer, told us.

"No other juror would want to contradict a former president," he said.

Imagine a former president telling a fellow juror with whom he disagreed, "Oh yeah? And how many electoral votes did you win?"

"The obverse concern," says Turow, "is that one or two jurors would disagree with the president just because they disagreed with him on other matters, increasing the possibility of deadlock."

But in just showing up for jury duty, former presidents say something vital about the political system in which they were briefly privileged to occupy the highest rung. Presidents have extra responsibilities, many of which most of us can't imagine. But they have no special privileges. They are elected to uphold the law, not be above it. As Justice Felix Frankfurter said, "In a democracy, the highest office is the office of citizen."