Accessibility links
Trump And Duterte Could Reset The Shaky U.S.-Philippine Alliance The Philippines has been an on-and-off U.S. ally. For his part, Trump could help reassure Duterte that the alliance is rock solid by guaranteeing U.S. commitment to help in the South China Sea. 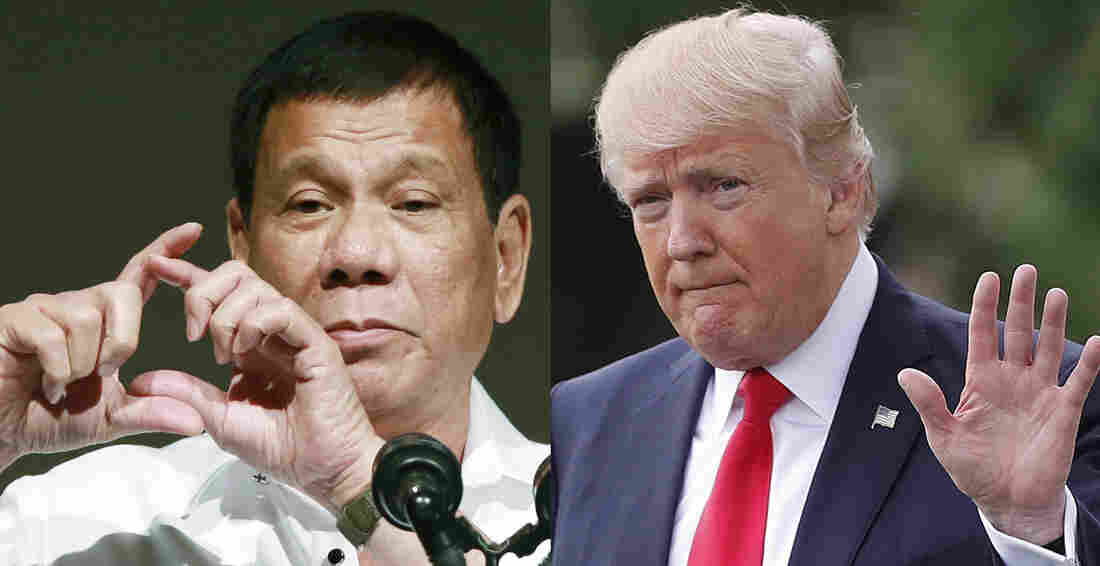 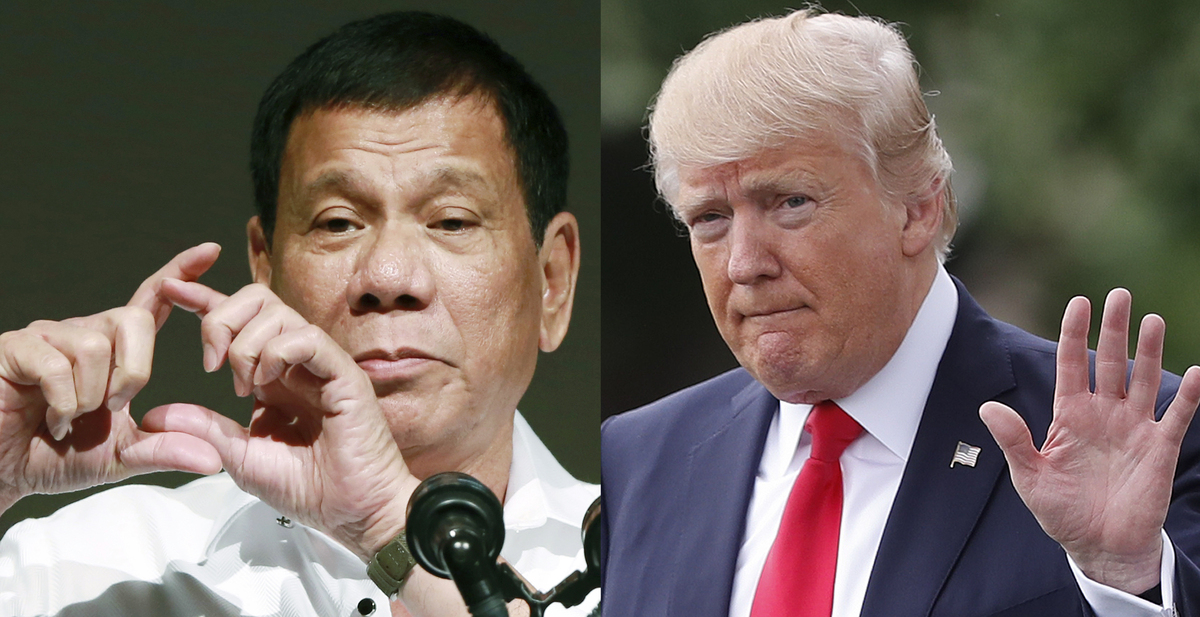 President Trump arrives in Manila Sunday night for this year's summit of the Association of Southeast Asian Nations, or ASEAN. It's the last leg of his grueling Asian trip, where he is expected to sit down for his first face-to-face meeting with the man sometimes called "The Trump of the East" — Philippine firebrand President Rodrigo Duterte.

Two leaders not shy about expressing their opinions. What could go wrong?

But in fact, the two men have already expressed their admiration for each other. And the visit may be a chance to hit the reset button on a long-standing alliance that has soured somewhat since Duterte's election.

It was just over a year ago — ahead of last year's ASEAN summit — when Duterte called then-President Barack Obama a "son of a whore" for his alleged criticism of Duterte's controversial war on drugs, which human rights activists say has left more than 13,000 people dead since it began. Duterte then followed up just a few weeks later with a state visit to Beijing where he announced his "separation from the United States," both "militarily and economically." That rattled U.S. diplomats for a time. But even though Manila has expanded its diplomatic and economic ties with Beijing, that "separation" never really happened.

"The defense establishment, the military, never really wavered in their desire for their continuing support, partnership, alliance with the United States," says Dindo Manhit, president of the Stratbase ADR Institute, a Manila think tank.

"Nothing changed on the ground, nothing, when he came back," De Castro says. "The Armed Forces of the Philippines confronted him and asked, 'What do you mean by separation?' And he said it's not a separation, doesn't mean severing our ties with the United States, just charting an independent foreign policy."

A policy based in part on Duterte's long-standing distrust of the United States. Partly personal. And partly based on the fact that he doesn't trust Washington to come to the Philippines' aid if push comes to shove over territorial disagreements in the South China Sea.

This helps explain his conciliatory approach toward China despite its territorial expansion in the South China Sea, even though the Philippines won a major victory last year when an international tribunal rejected China's claim to sovereignty over most of its waters and rebuked China for its construction of artificial islands in disputed waters. Duterte's reasoning, De Castro said, came down to economics.

"His calculation regarding the ruling is, I could use it to extract more money from China if I would just set it aside," De Castro says. But that money, De Castro argues, has been slow in coming, frustrating analysts like Jay Batongbacal, director of the Philippines Institute for Maritime Affairs and Law of the Sea, who thinks the Philippines is giving away too much.

"The partnership we have with the United States, with Japan, etc., all of that is being played down and essentially discouraged because of the need of the government to not do anything that might be seen as provocative to China," he says. "Even as China continues to pursue their development of their possessions in the South China Sea."

U.S.-Philippines military alliance could be stronger

And even though the U.S.-Philippines military alliance remains solid, it could and should be stronger, says Gregory Poling, director of the Asia Maritime Transparency Initiative at the Center for Strategic and International Studies in Washington, D.C. He describes the current relationship as "treading water."

"On things like our big joint exercises, like Balikatan, having those scaled back is damaging, it's a bad thing. Seeing EDCA, the Enhanced Defense Cooperation we signed, not fully implemented is a bad thing," Poling says. "The Pentagon and the armed forces here in the Philippines would like to be improving relations, not just maintaining the status quo.

"And they're unable to do that under Duterte. So treading water is effectively losing ground to the Chinese. But it's not as bad as people were afraid it was going to be when Duterte came to office."

And in fact, Duterte's anti-U.S. rhetoric has been tempered in the past few months, particularly in the past few days — as in this address to Philippine Marines at Taguig City:

"We remain to be the best friends with America," he said on Tuesday. "Most of you or some of you went to school in America and I do not blame you if your sentiments really remain with the power that helped us for the longest time."

Part of that softening, analysts here say, is Duterte recognizing the critical role the U.S. played in helping end the six-month-long siege of the city of Marawi on the island of Mindanao by ISIS-linked militants. The other part? President Trump isn't President Obama.

For Duterte, "President Trump respects him"

"For him, politics is always personal," De Castro says. And Trump hasn't lectured Duterte about this war on drugs. He has praised him, according to a leaked telephone conversation between the two men when Trump invited Duterte to the White House.

"For him, President Trump respects him. They're on the same wavelength," De Castro says. "Unlike President Obama, who he accused of being rude and being an intellectual. President Trump is someone he could deal with."

Poling agrees — to a point.

"Personality-wise, they are two of a kind. And that is both good and bad," he says. "Both like the pomp and circumstance more than the policy. And so they can, with, you know, a good photo op and a handshake and just being nice to each other reset the relationship in a sense."

But, he warns, "it also means there's a lot of danger because we've seen repeatedly with both men, when they go off script, they go way off script. And when they talk about policy, things can get nasty."

Neither man needs that at a time when Trump is interested in Duterte's help in getting ASEAN leaders on board a common stance toward an increasingly unpredictable North Korea. For his part, Trump could help reassure Duterte that the longtime alliance is rock solid by offering more incentives and guarantees of U.S. commitment to help the Philippines defend its maritime rights and territorial integrity in the South China Sea.

As long as they don't start talking about Duterte's war on drugs. Then, all bets are off.