Accessibility links
Robert Reich Shows Off His Cartooning Skills in 'Economics in Wonderland' "Economic concepts don't readily lend themselves to cartoons," says the former secretary of Labor, a talented cartoonist who's put a lot of thought into drawing abstract ideas like tax expenditures.

Robert Reich Shows Off His Cartooning Skills In 'Economics In Wonderland'

Robert Reich Shows Off His Cartooning Skills In 'Economics In Wonderland' 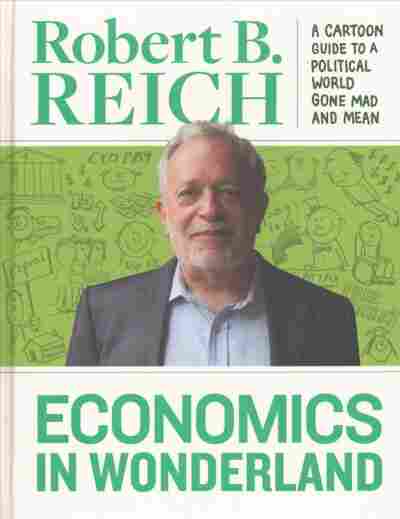 A Cartoon Guide to a Political World Gone Mad and Mean

by Robert B. Reich

Title
Economics in Wonderland
Subtitle
A Cartoon Guide to a Political World Gone Mad and Mean
Author
Robert B. Reich

If you only know Robert B. Reich as a former secretary of Labor, frequent TV commentator and author of numerous books on economic policy, you're missing out. Turns out, he's also got a remarkable knack for wielding a Sharpie. His economic cartoons are a vital part of such documentaries as 2013's Inequality for All and Saving Capitalism, due out this month. Now he's putting his artistic side front and center in Economics in Wonderland: A Cartoon Guide to a Political World Gone Mad and Mean — and I spoke to him about his cartooning life (our interview has been edited for length and clarity).

Reich tells me that as a kid, he always went straight for the comics pages of the newspaper. "I'm dating myself, but they used to have whole comics [pages] that would come with the Sunday paper! That was the age of 6 or 7, that's the first thing I looked at."

In the book you say that, having taught two generations of college students, you've noticed what you called a "subtle but unmistakable change in the way they absorb information." What's the nature of that change?

Young people today are much more visually acute than they were a generation ago. They pick up visual cues much faster. I think a lot of that comes from watching films, and videos, and the Internet. I [could] sit next to a young person, watching a movie, and they would see things that would completely escape me. One of my sons suggested about five or six years ago, "If you want to reach my generation, Dad, you might want to experiment with videos, and film, and even cartooning."

Was it hard to figure out how to draw economic cartoons?

At first, it was quite a challenge. Economic concepts don't readily lend themselves to cartoons. [They] tend to be abstract or complicated. I struggled for six months or so while I figured out how to best convey these concepts visually. 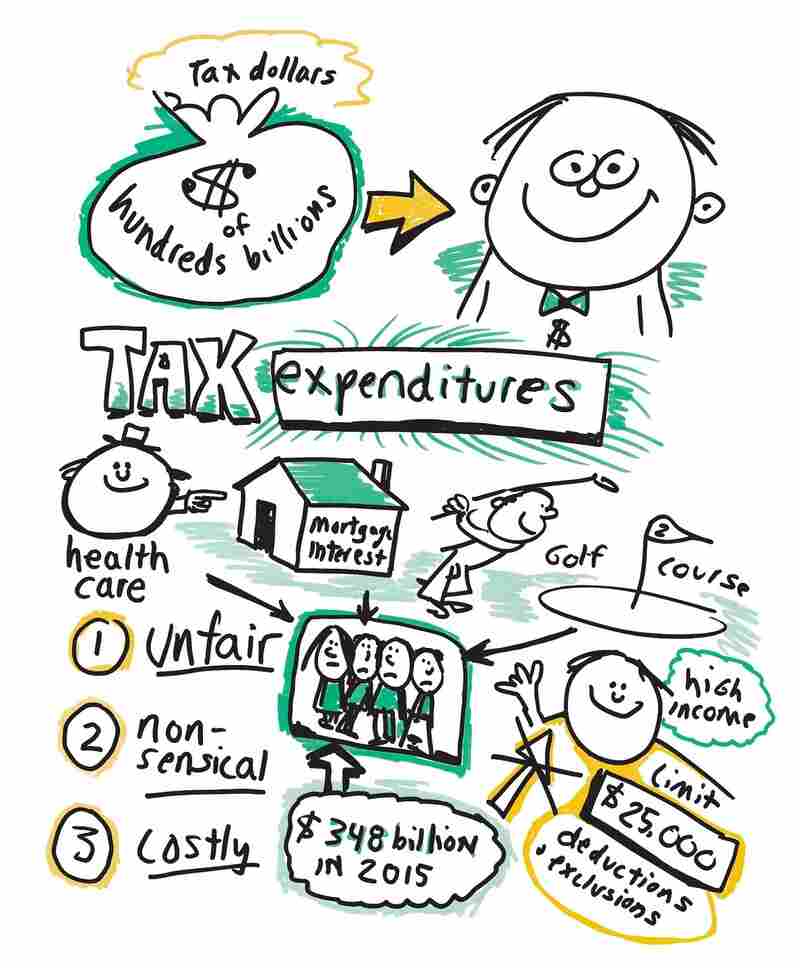 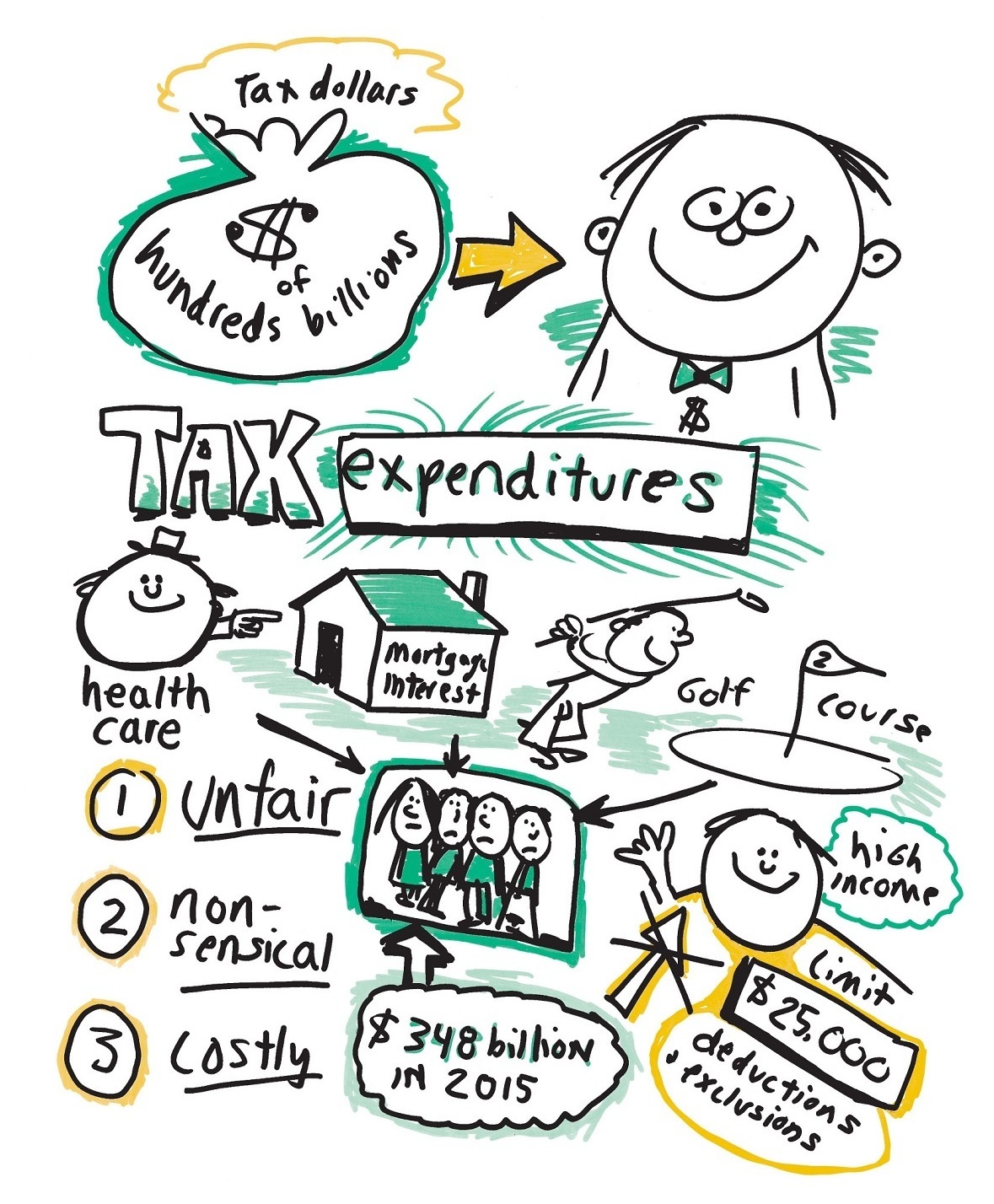 It's hard to explain abstract concepts like "tax expenditures" in cartoon form, says Robert B. Reich.

Macroeconomic concepts, in terms of total aggregate demand in an economy, the business cycle, economic growth, the determinants of economic growth, all of those things. Those are particularly difficult, because it tends to be so abstract. It's also a very contentious area of economics, particularly after the financial crisis of 2008. There's still a great deal of head-scratching about macroeconomics. Microeconomics concepts and public policy issues are far easier because they're closer to home. People have more direct experience with them.

Why do cartoons work to convey these ideas? Is it something about seeing that little face there, that hooks people in?

Yes. A face that has a little bit of emotion, or a series of faces, and then some movement. People react to faces and to bodies that are in motion. They're curious about what those little people are doing, why they're doing it.

Was there a particular concept or section in the book that you had to come back to a couple of times to figure out the best way of illustrating it?

There's one on the word of the year. Every year, the folks at Pictionary.com look for a word that trended during the year. Last year's word was "xenophobia." That was a challenge — how to express xenophobia in cartoons? The same with "patriotism." I wanted to help people understand that the concept of patriotism was not primarily about waving the flag or singing the national anthem, but had some deeper meanings. I struggled for a while about how to simply get that across.

On Page 12, Tax Expenditures, you go from big, simple shapes at the top to more complicated shapes at the bottom. How did that drawing evolve?

Most people have no idea what a tax expenditure is and they don't know that it's the same as government spending. So what I had to do, both in the essay and also visually, is make that big point very, very clear. Then to get more detailed about what that all meant: Why mortgage interest is a tax expenditure. Why tax deferred pensions are tax expenditures. And then, what was the problem with tax expenditures. The cartoon doesn't explain it [all] in itself, but I tried to give life to the essay.

What symbols or drawings serve as visual cues for people, in some of your illustrations?

Economic concepts don't readily lend themselves to cartoons. [They] tend to be abstract or complicated.

I've found that you can very simply give a sense, visually, of an almost infinite crowd by having a handful of people in the front and then showing they go far into the background. People get it really, really easily. [To show] the wall between church and state, all you need is a little [bit] of a wall, and then you can see holes in the wall. And you have religious institutions on one side, and you've got somebody standing there who's holding the American flag, but he's a little worried. You can see how simple that drawing is. The goal is to convey a lot in that simplicity.

Do you plan on using cartoons in your work in the future?

In December I'm going to do a [video of a] very long cartoon, half of an entire wall. I'm not sure I'm going to say anything. It may be just one very, very large cartoon that the camera follows, and so people can make sense of it as I go along.

What's it going to be about?

It will be about how we got into the current fix we're in, economically and politically, and how we get out. It's going to need an entire wall.

You might find yourself turning the corner and taking up two walls.

That's right, and the ceiling.