Accessibility links
A Lifetime Of Finding Peace, Purpose And Voice In The Pages Of Comics Stephanie Williams discovered comics young, drawn early to X-Men, which she saw as an allegory for the persecution of black Americans. An adult now, she co-hosts a podcast about black superheroines. 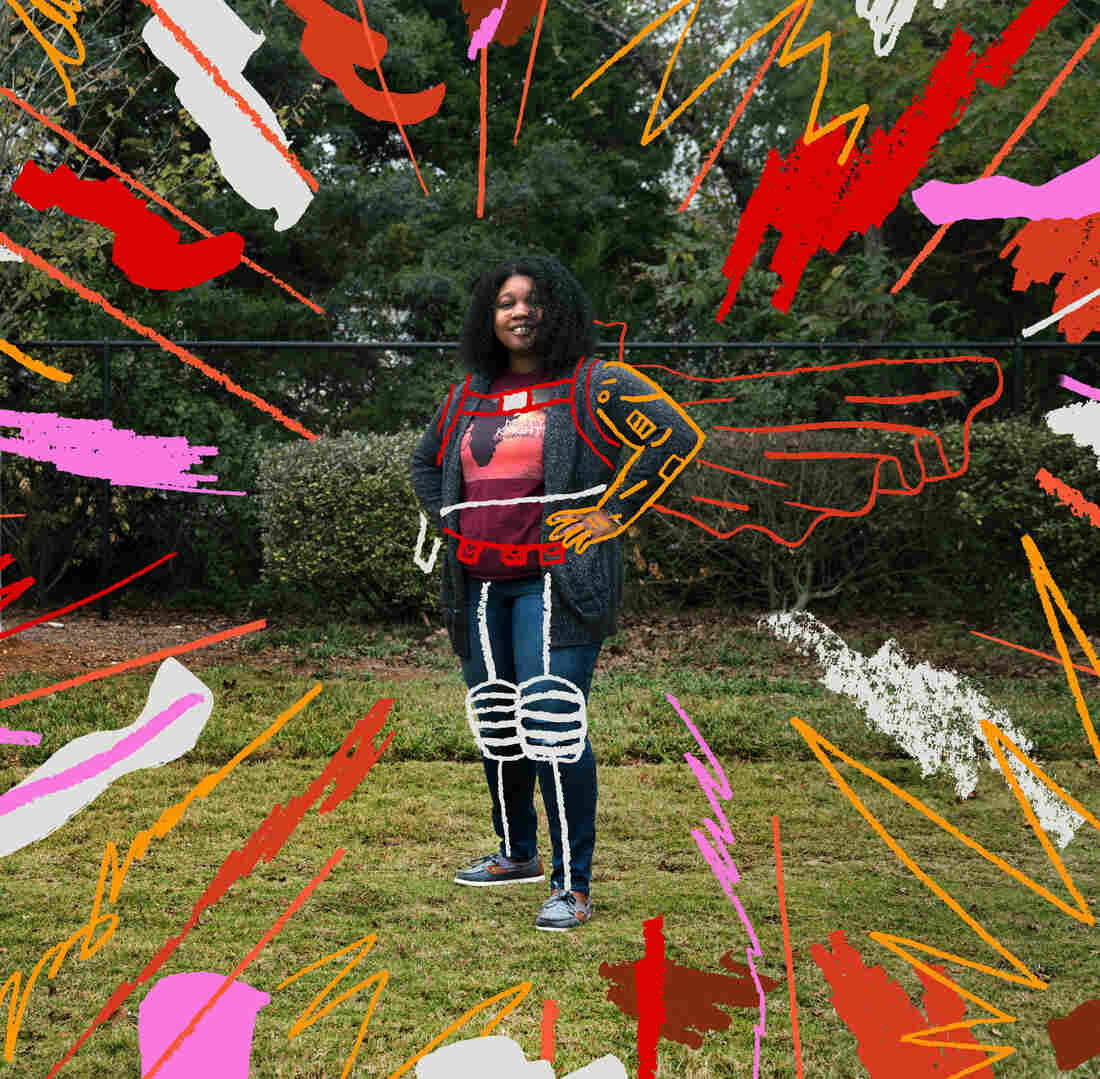 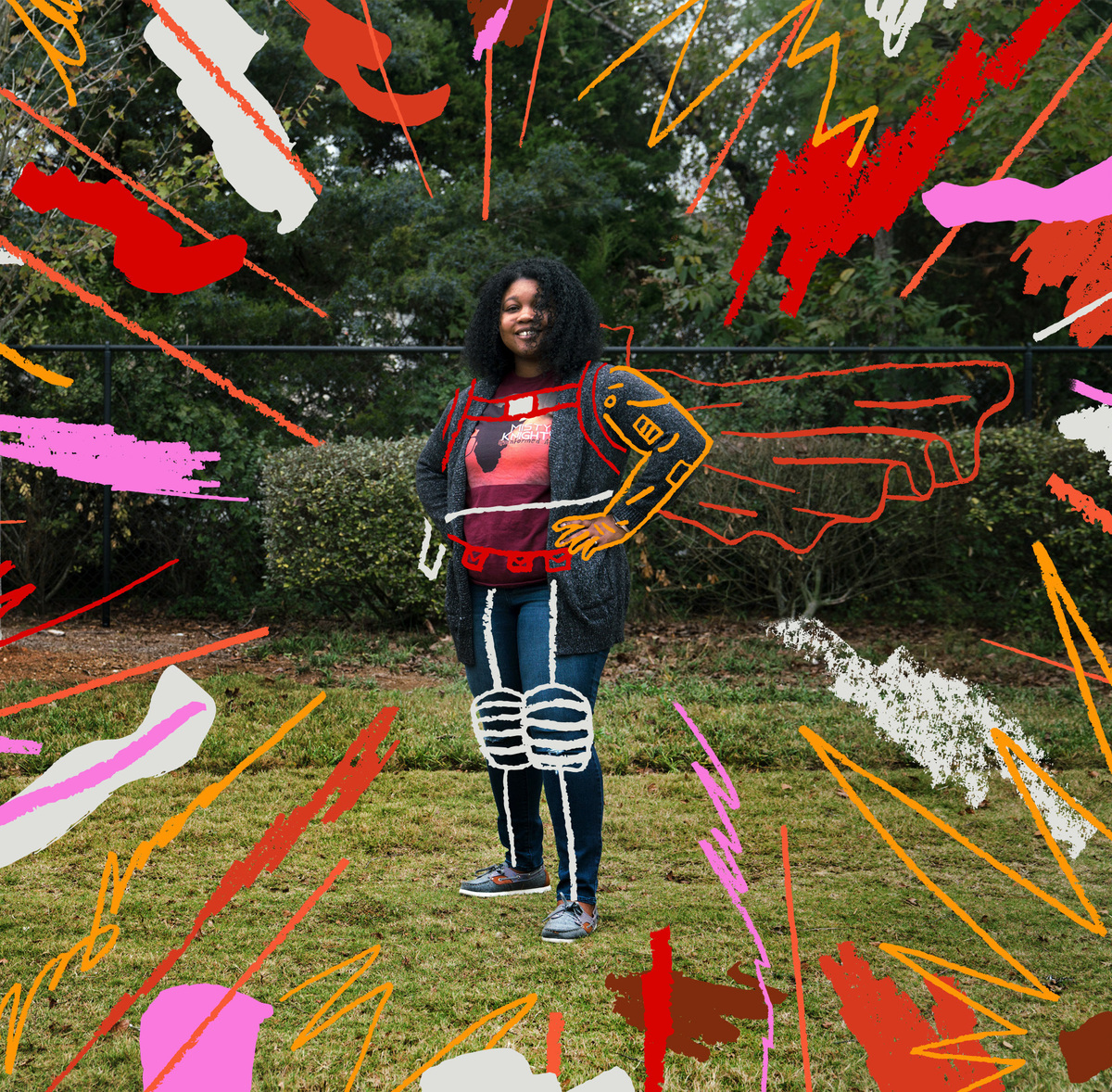 Photo illustration by Claire Harbage/NPR and Paige Vickers for NPR

Becoming a fan of something often means becoming a part of a community. And finding that group of like-minded people can feel like finding a place you truly belong. Other times, that community isn't all that welcoming.

As part of Morning Edition's exploration of fandoms, we profile Stephanie Williams, in her own words, about her love of comics. Williams, who lives in Charlotte, N.C., says her fandom has shaped many phases of her identity: teenager full of angst, a new mom emerging from the fog of postpartum depression, and now, as a strong African-American woman and parent.

I've always loved the escapism of comics and being able to just get away.

When I was a teen I was really angsty. It's crazy thinking about it now because how tough do you really have it as a teenager because you're not paying any bills or anything like that? But ... the world felt really, really tough for some reason. Like, I need to be studying for the SAT, and you gotta go to college and all this other stuff. 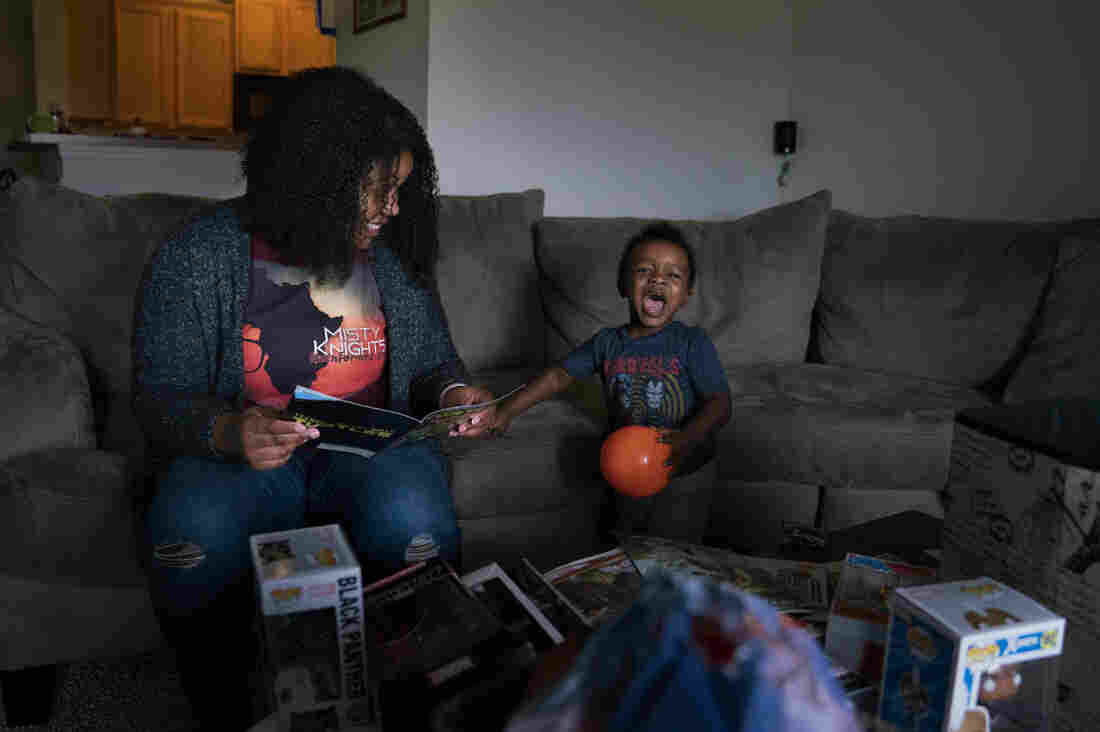 Stephanie Williams and her son Micah, 2, sit on the sofa looking at comic books in their living room in Charlotte, N.C. Claire Harbage/NPR hide caption 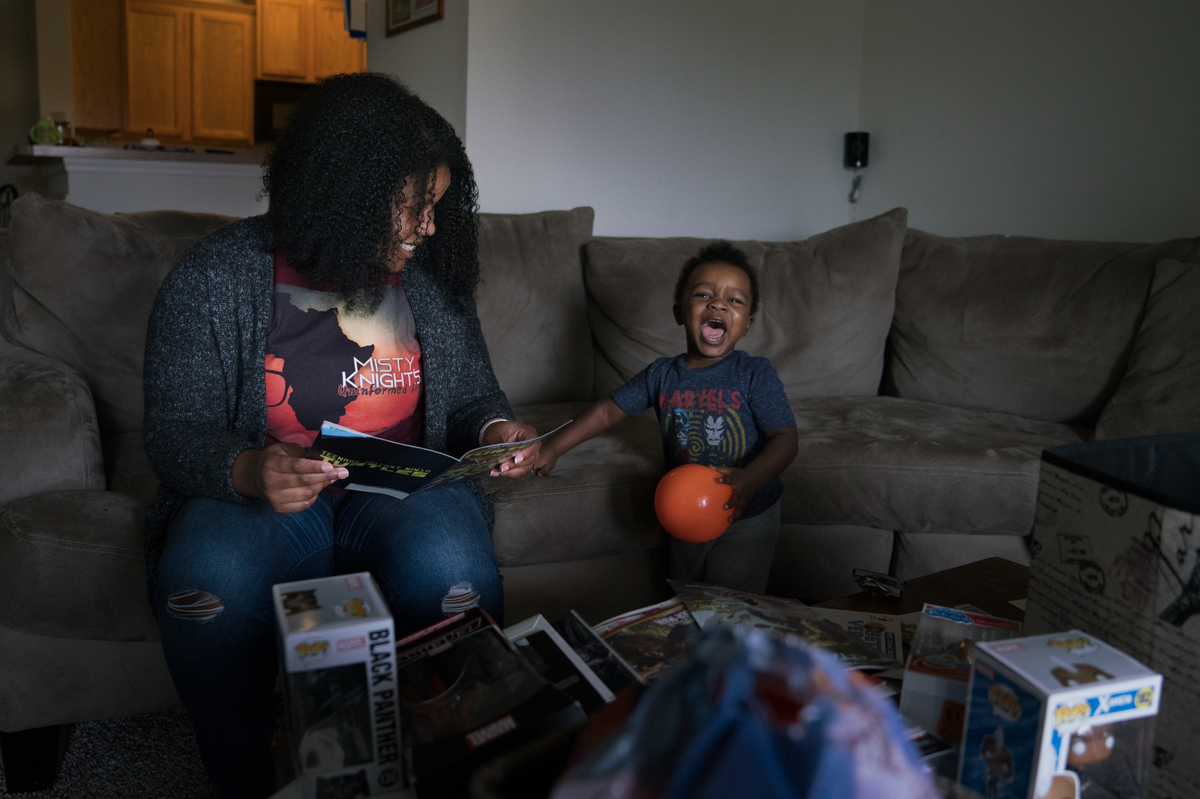 Stephanie Williams and her son Micah, 2, sit on the sofa looking at comic books in their living room in Charlotte, N.C.

So I was really good about just kind of holing up in the corner of my bed and against the wall and reading, and I just felt at peace. And after I was done reading, the world would come crashing back down.

I feel like another reason why I'm drawn to X-Men is because the X-Men for me, like, I just saw them as people of color. Because of the way they were persecuted, they were kind of stigmatized, set aside, they couldn't do this and that. I just felt like that kind of paralleled with the struggles of people of color, especially in America.

Professor X and Magneto — it didn't hit me until maybe late elementary, junior high, I was like, "Oh, wait, Dr. King and Malcolm X."

These stories are more than just fiction. There is something very real rooted in them and that's something that you can gravitate toward. 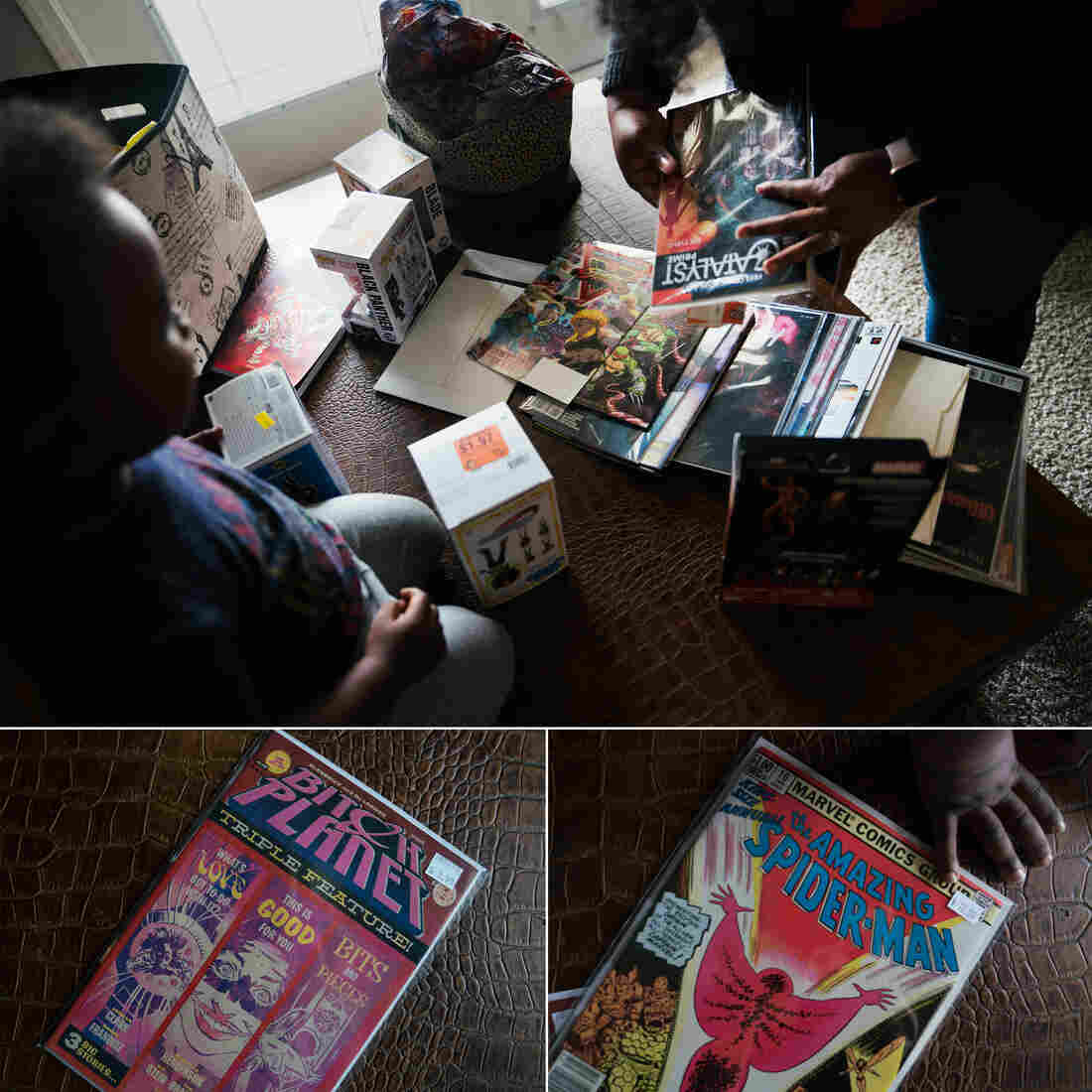 When you're passionate about something, I found, it gives you purpose. I didn't see the importance of that until I had my first child and was going through postpartum depression. And I was into fandoms and stuff like that, but I had kind of pushed that part of me away.

Prior to having him I was just really caught up in being an adult, but the fog of postpartum depression, when I was going through that, it was really hard to focus on anything. So I started picking up my comics more, and comics in general really helped me find my center. Like, it reminded me that hey, you are still somebody outside of motherhood, because people kind of forget about you and just say, "How's the baby doing?" They never ask you how you're doing. 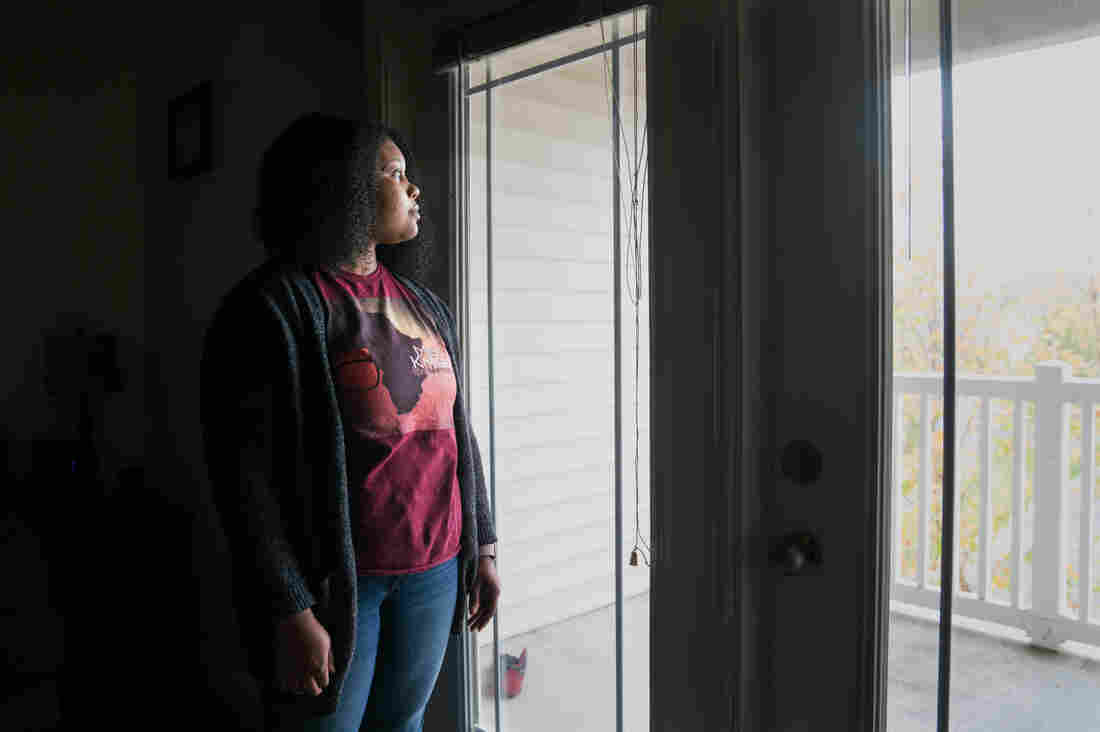 Williams looks out a door to the balcony of her apartment. Claire Harbage/NPR hide caption 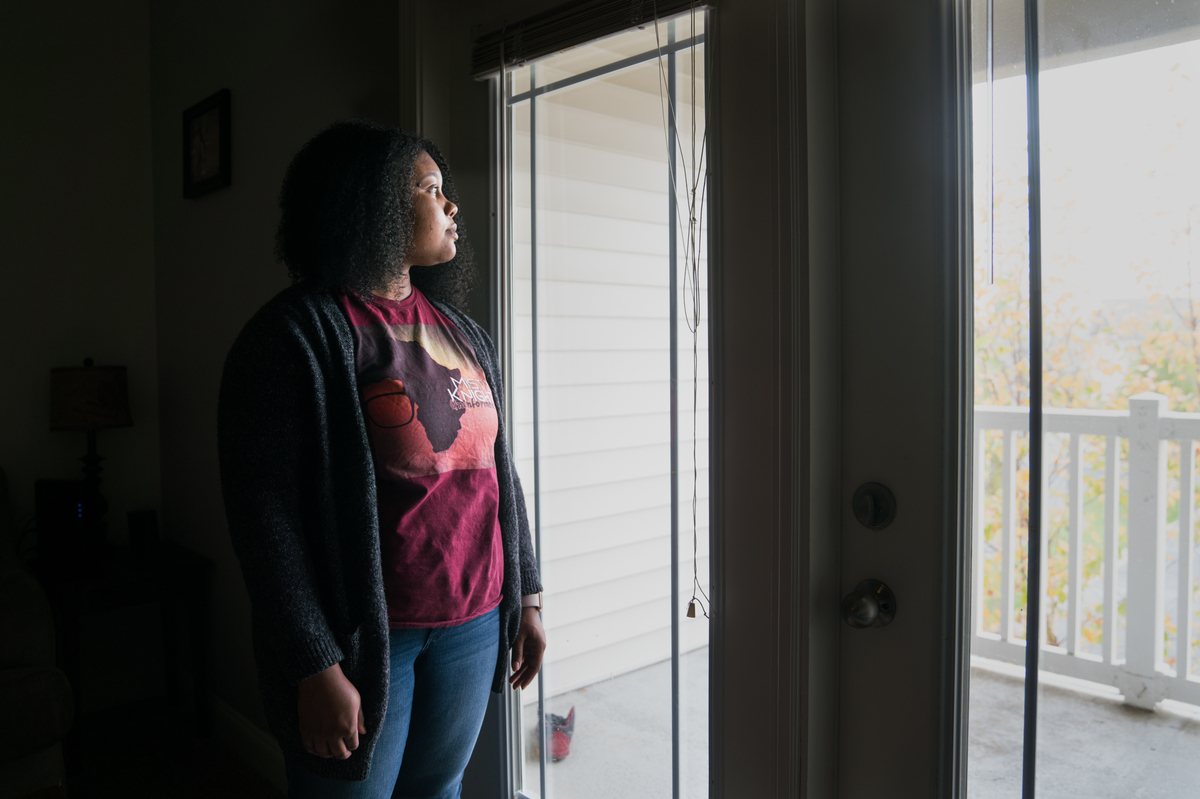 Williams looks out a door to the balcony of her apartment.

Being a mom is important, too, but he's gonna get older, and I'm gonna call him, he's not gonna pick up his phone, and that's gonna be that. I pick my comics up, they're still going to be there.

Williams says she has felt minimized in the comics community. In particular, a tweet she wrote about the lack of black women superheroes in comics went viral, with many responses challenging her expertise. It sparked a podcast, Misty Knight's Uninformed Afro, where she and co-host Jamie Broadnax talk about black superheroines.

As social media has really gotten rolling, I've noticed that when a woman says something — voicing how she felt about a comic — there's always some man waiting in the wings to swoop in and tell her how her opinion is not important. 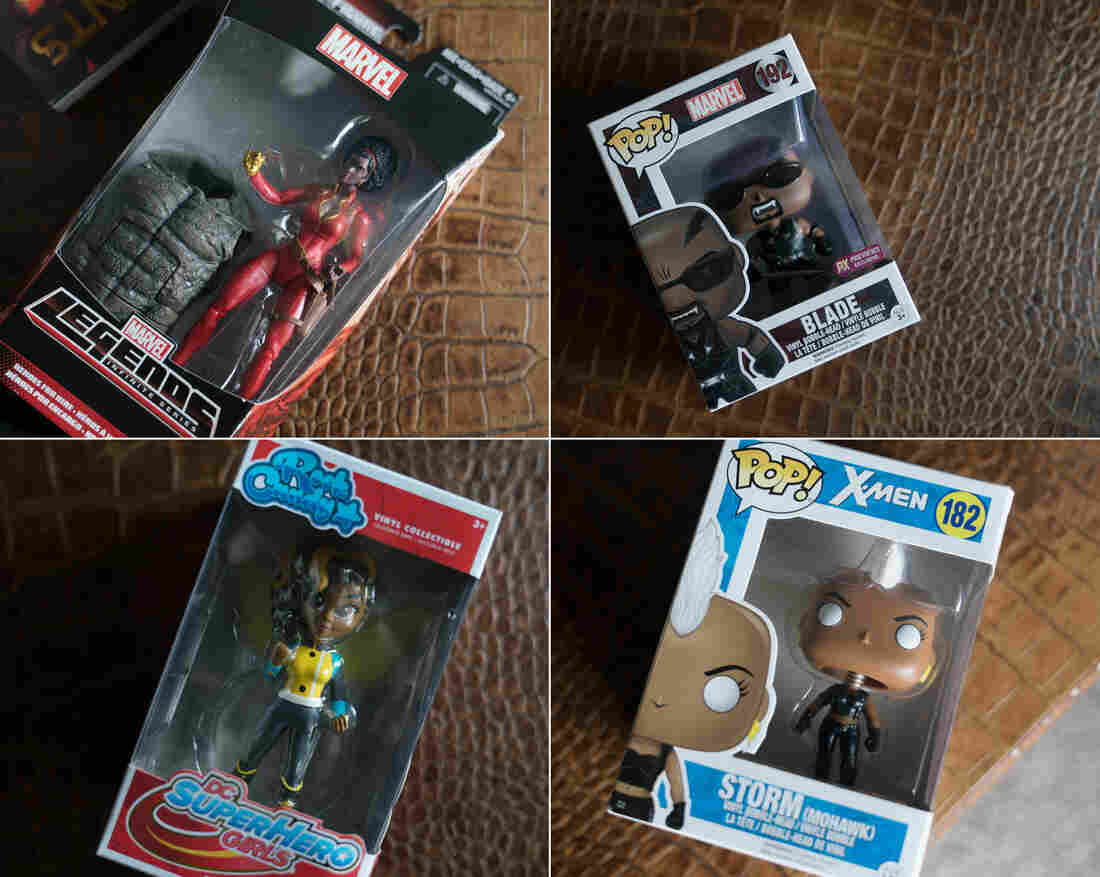 I just kind of wish Misty Knight's Uninformed Afro was around when I was younger. I was at a comic bookstore in Charlotte on a free comic book day and a man and his daughter came up to me because I had on my Misty Knight's Uninformed Afro T-shirt on. And she's just telling me how appreciative of the podcast she was, and I could just imagine myself being in her shoes and how wonderful that is to have these two black women talking about characters — and the fact that they listen to our podcast together, I was just like, "Oh, that's cool!"

Jamie Broadnax, editor-in-chief and founder of blackgirlnerds.com, and director of community outreach for Universal Fan Con, appears in the audio version of this story.

Who Gets To Be A Superhero? Race And Identity In Comics