Accessibility links
Review: Charlotte Gainsbourg, 'Rest' The French singer (and actor) has made her first album in 7 years — a testament to the power of immaculate, effortless-sounding pop songcraft, even in the face of loss. 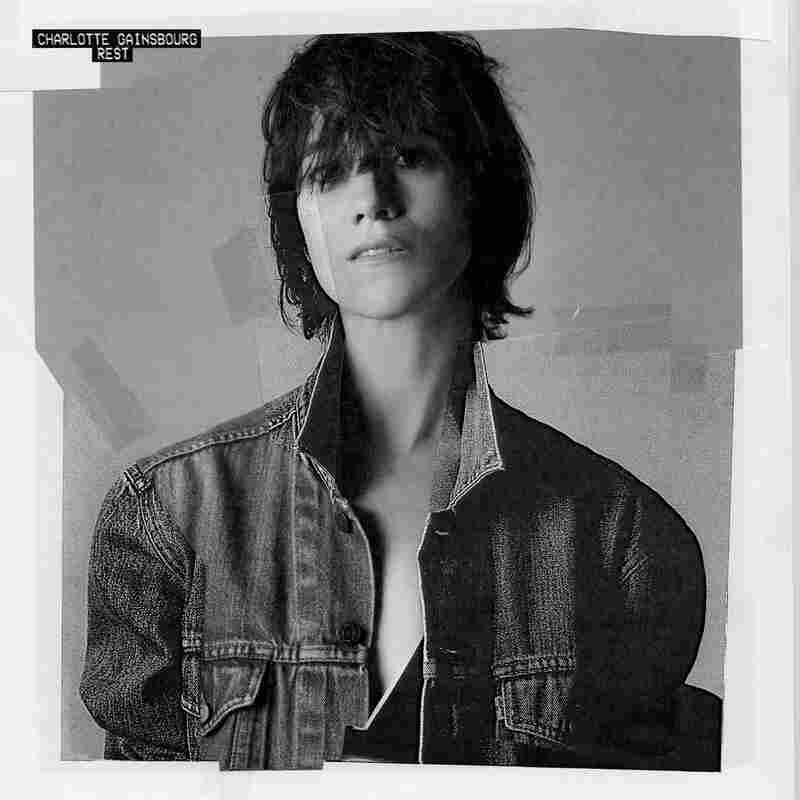 On "Kate," one of the most arresting songs on Charlotte Gainsbourg's new album Rest, the French singer and actor was inspired to write her own lyrics for the first time. But the occasion was a tragic one. In 2013, her elder half-sister Kate Barry died after falling from the window of her Paris apartment in what was ruled a suicide. Gainsbourg and Barry had different fathers—the former's was the legendary singer Serge Gainsbourg—but they share the same mother, the singer-actor Jane Birkin, and grew up together. Grappling with that, Gainsbourg renders "Kate" as a pulsing, urgent discourse on grief shrouded in symphonic synths and her own breathy vocals. She overcame her reluctance to pen the song herself not only because of the personal subject matter, but because of Serge Gainsbourg's legacy as one of France's cultural icons. "In the shadow of my father," she said recently, "writing in French was something I never dared to do."

Despite the delicacy and emotional heft of "Kate," the album as a whole is neither tentative nor monolithically mournful. "Deadly Valentine" surges confidently on a swelling, synth-disco groove worthy of Giorgio Moroder, and its edge of romantic danger is softened by a theatrical playfulness. In the song's video, directed by Gainsbourg, Dev Hynes of Blood Orange plays her lifelong lover in a narrative that's equal parts dreamy and dark. As Gainsbourg explained, "This song mixes wedding vows with an offbeat tone. I wanted to express the idea of a lifetime engagement; a couple running to church, from childhood to old age, a lifetime path. I asked my friend Dev Hynes if he would play my partner, and he very graciously agreed. It was fun finding our younger and older selves!"

Hynes is far from Gainsbourg's only impressive collaborator. The majority of the album was produced by SebastiAn — who has worked with everyone from Frank Ocean to Daft Punk — and Daft Punk's Guy-Manuel de Homem-Christo himself produced and co-wrote the album's title track. "Rest" is a fantasia in shadows and whispers. Gainsbourg, alternating between French and English, recalls "flirting in the moonlit sky," while de Homem-Christo strips down the electronic instrumentation to a minimal sketch of slinky keys and melodic sweetness. No less than Paul McCartney wrote "Songbird In A Cage" for Rest (as well as contributing piano, bass and guitar to the track) after an offhand suggestion over lunch 6 years ago turned into a dream partnership for the singer. It's one of the album's liveliest songs, built around a whiplash beat that gives way to a sumptuously hooky chorus. Meanwhile, Gainsbourg veers from robotic chanter to elfin chanteuse.

Rest is Gainsbourg's fourth album, but it's her first in 7 years. It's a long break for any recording musician, although it's certainly understood for a polymath like Gainsbourg, who also juggles a film career. If anything, her long musical dormancy—as well as the loss of her sister—has infused Rest with a renewed sense of purpose. Swirling and baroque, "Ring-A-Ring O' Roses" approaches ABBA-meets-shoegaze; "Sylvia Says" harnesses a funky, dance-pop vibe as it bubbles away with fizzy bliss. "Les Oxalis" ends the album with an epic flourish of richly layered vocals, propulsive rhythm and ethereal piano that all hang together in weightless suspension. If Gainsbourg is still worried about getting out from under the shadow of her father, she should let those worries go; gorgeous and assured, Rest is a testament to the power of immaculate, effortless-sounding pop songcraft, even in the face of loss.