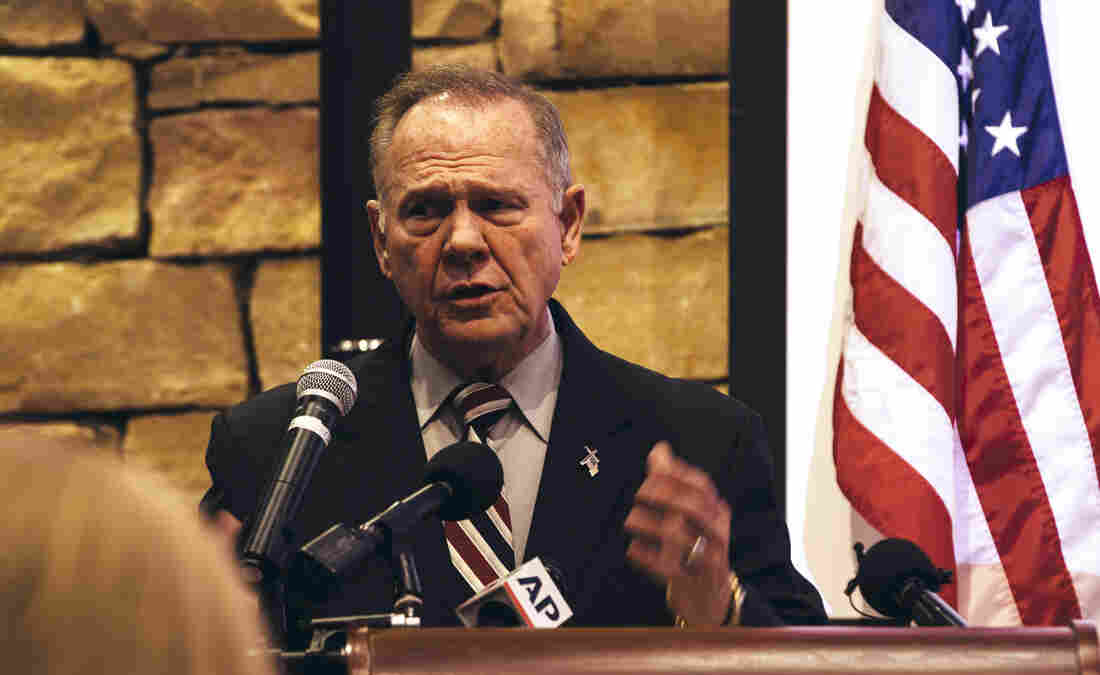 Roy Moore, the Alabama Republican candidate for U.S. Senate, has been accused of previous sexual misconduct with teenagers, which he has denied. Wes Frazer/Getty Images hide caption

Another woman has charged that Alabama Republican Senate candidate Roy Moore sexually assaulted her when she was a teen, and top Republicans now threaten to expel Moore should he win Alabama's special election on Dec. 12.

In an emotional news conference, Beverly Young Nelson said Moore groped her and tried to force himself on her in his car behind the restaurant where the then-16-year-old worked.

Nelson, appearing alongside attorney Gloria Allred on Monday, said the incident occurred in 1977. She said she pleaded with Moore, then the assistant district attorney of Etowah County, Ala., to stop.

"Instead of stopping, he began squeezing my neck, attempting to force my head onto his crotch. I continued to struggle," Nelson said, adding, "I thought that he was going to rape me."

Nelson said she either fell or was pushed out of Moore's car, which she said sped away, "burning rubber." She said she had black and blue marks on her neck following the incident, which she covered with makeup.

Moore's campaign chairman, Bill Armistead, released a statement calling attorney Allred "a sensationalist leading a witch hunt," adding that Moore "is an innocent man and has never had any sexual misconduct with anyone."

"I believe the individuals speaking out against Roy Moore spoke with courage and truth, proving he is unfit to serve in the United States Senate and he should not run for office. If he refuses to withdraw and wins, the Senate should vote to expel him, because he does not meet the ethical and moral requirements of the United States Senate."

Earlier Monday, Senate Majority Leader Mitch McConnell said, "I believe the women" and called on Moore to "step aside."

McConnell made his remarks at a news conference in Kentucky. Moore has been accused of initiating sexual contact with a 14-year-old in 1979 when he was 32. Four other women have accused Moore of inappropriate contact when they were teens.

McConnell had initially said last week Moore should end his candidacy "if" the allegations were true. McConnell had supported the incumbent senator, Luther Strange, in the primary. He said a write-in campaign for Strange is now an option.

One of Moore's accusers says she was 14 when he first approached her at the Gadsden Mall. Reporting on Monday in The New Yorker and Al.com cites various sources as saying that Moore was a regular fixture at the shopping mall when he was in his 30s. His reputation for flirting with teenage girls at the mall was reportedly "common knowledge" in the small town.

Moore has come under increasing pressure from GOP lawmakers on Capitol Hill to step aside ahead of next month's special election. He has refused, saying the accusations were "false and untrue" and threatening to sue The Washington Post, which first reported the story on Nov. 9.

Moore responded to McConnell via Twitter, saying McConnell "has failed conservatives and must be replaced."

The NRSC has pulled out of a joint fundraising agreement with Moore, and the list of prominent Republicans opposing Moore's candidacy has steadily grown.

I have now read Mr. Moore’s statement and listened to his radio interview in which he denies the charges. I did not find his denials to be convincing and believe that he should withdraw from the Senate race in Alabama.

Among the most recent is Maine's Sen. Susan Collins, who in a statement on Twitter Monday said she "did not find Moore's denials to be convincing."

Republican leaders in Alabama, however, have largely defended Moore. Alabama State Auditor Jim Zeigler said there is "just nothing immoral or illegal" about the allegations and compared them to biblical marriages. The comments drew criticism from some evangelical leaders.

Meanwhile, Republican Gov. Kay Ivey has called the allegations against Moore "deeply disturbing," but on Monday she said, "I will withhold judgment until we get more of the facts," according to WSFA in Alabama.