Accessibility links
'Why I'm No Longer Talking To White People About Race' Is A Call To Action In 2014, British journalist Reni Eddo-Lodge wrote a blog post about how tired she was of engaging with oblivious white people about race. That post went viral, and it's now the basis for her new book. 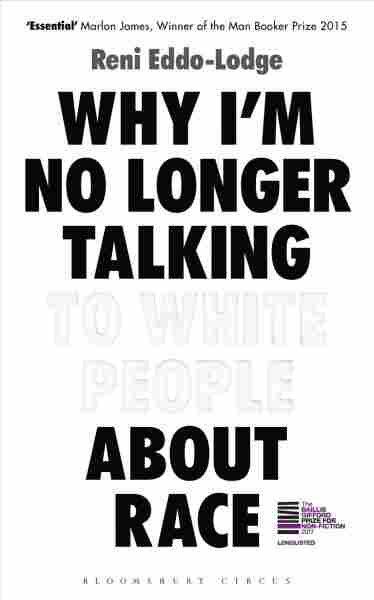 The provocative title is hard to ignore, and so is the book's cover. Seen from afar, it appears to be called Why I'm No Longer Talking About Race, which is intriguing enough on its own. You have to look closer to see To White People hiding underneath it in debossed letters. It's a striking visual representation of white people's blindness to everyday, structural racism — one of the central ideas that British journalist and feminist Reni Eddo-Lodge presents in her debut collection of essays.

"Why I'm No Longer Talking to White People About Race" is also the title of a blog post she wrote back in February of 2014. In that post, Eddo-Lodge wasn't trying to remove white people from the conversation or take them on a guilt trip; rather, she was simply saying that she'd had enough. It was an act of self-preservation. She was done with talking to white people who'd never had to think about what it meant to be white, or who showed a deep emotional disconnect when she told them about her experience as a black woman, or who — instead of listening while she spoke — were almost instinctively preparing trite counter-arguments in their heads, waiting for her to finish just to tell her that she was wrong — situations that will sound only too familiar to many people of color.

The post quickly went viral and, ironically, ever since she pressed publish she hasn't been able to stop talking about race. Readers flock to see her speak at events around the U.K; just few a days ago, organizers of an event at London's Tate Modern museum had to turn hundreds of people away from one of her events. She took to Facebook and Twitter to address the situation, apologizing to those who couldn't get in — and pointing out her frustration at being underestimated. The whole incident, she wrote, spoke to "many of the issues I've written about in my book."

In this collection of seven essays, Eddo-Lodge delves into topics like structural racism, class and feminism. But she begins with a crash course in black British history. Despite growing up in London, in school she studied black history through the lens of the American civil rights movement. It wasn't until she went to university that she learned more about her country's brutal and extensive participation in the slave trade — which inspired her to learn more about what it was like to be black in post-slavery Britain. She writes about this history with the clarity and approachability of a curious learner sharing what she's discovered, giving necessary context for everything she's going to discuss in the rest of the book. And although Why I'm No Longer Talking centers on events in Britain, it's still accessible to readers of black American history.

That's the case throughout the book, as Eddo-Lodge touches on themes that are sure to resonate with people of color everywhere. This is especially evident in her exploration of white privilege, which she defines as "an absence of the consequences of racism" — an eloquent explanation paired with real-world examples of what happens when white privilege seeps into the conversation about race, whether it's an informal chat with a new acquaintance or a wider national discussion around a racially motivated murder.

The impact of that blog post back in 2014 was a clear sign that people — both white and black — were hungry for more meaningful discussions about race. This collection of essays is Eddo-Lodge's contribution to keeping the conversation going. But she takes it a step further and makes a call to action. That call is muted at the beginning: "I hope you use it as a tool," she writes in the preface, but by the end, Eddo-Lodge is unapologetic in calling racism a white problem: "It reveals the anxieties, hypocrisies and double standards of whiteness. It is a problem in the psyche of whiteness that white people must take responsibility to solve."

It's that boldness, that straight talk which makes this book memorable. Eddo-Lodge pushes readers to recognize that racism is a systemic problem that needs to be tackled by those who run the system.

Silvia Viñas is a journalist and editor for NPR's Spanish-language podcast Radio Ambulante.