Accessibility links
White Evangelicals Conflicted By Accusations Against Roy Moore Evangelicals have long railed against the evils of secular liberalism, fueled by reports of sexual misconduct among Hollywood celebrities. Now those charges are leveled against one of their own. 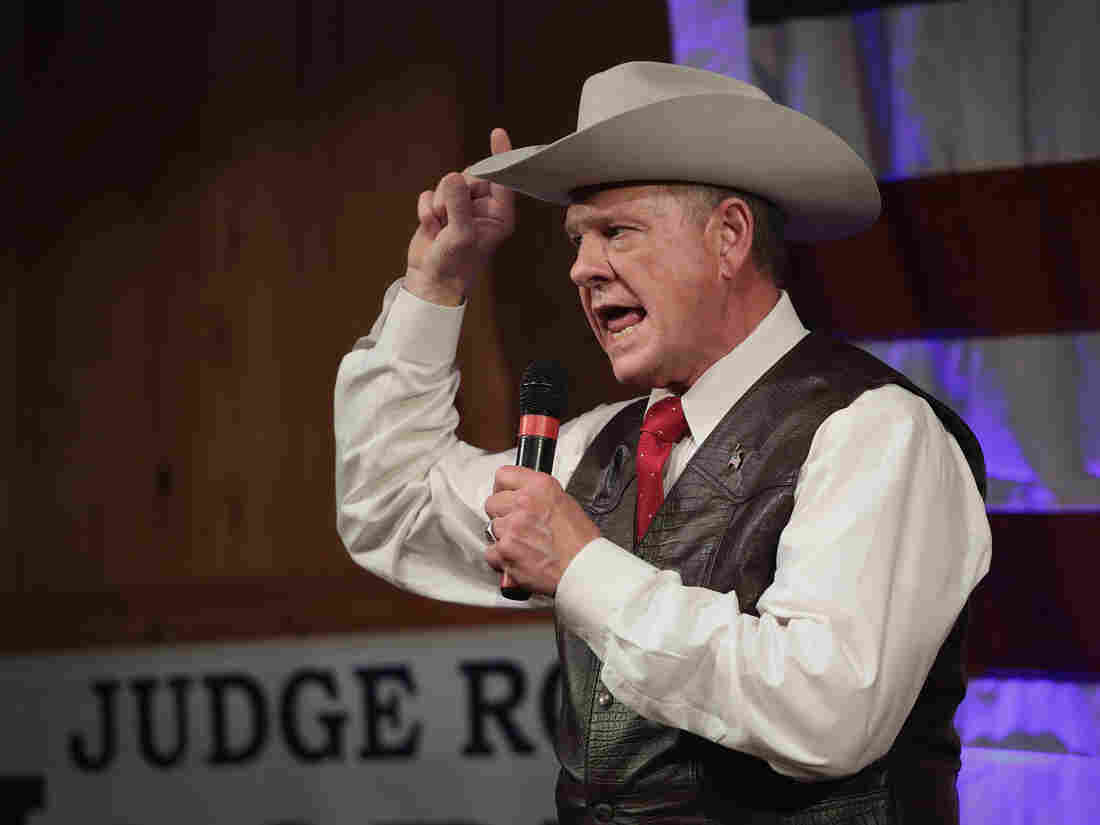 U.S. Senate candidate Roy Moore faces allegations that he acted inappropriately toward a 14-year-old girl when he was 32. Scott Olson/Getty Images hide caption 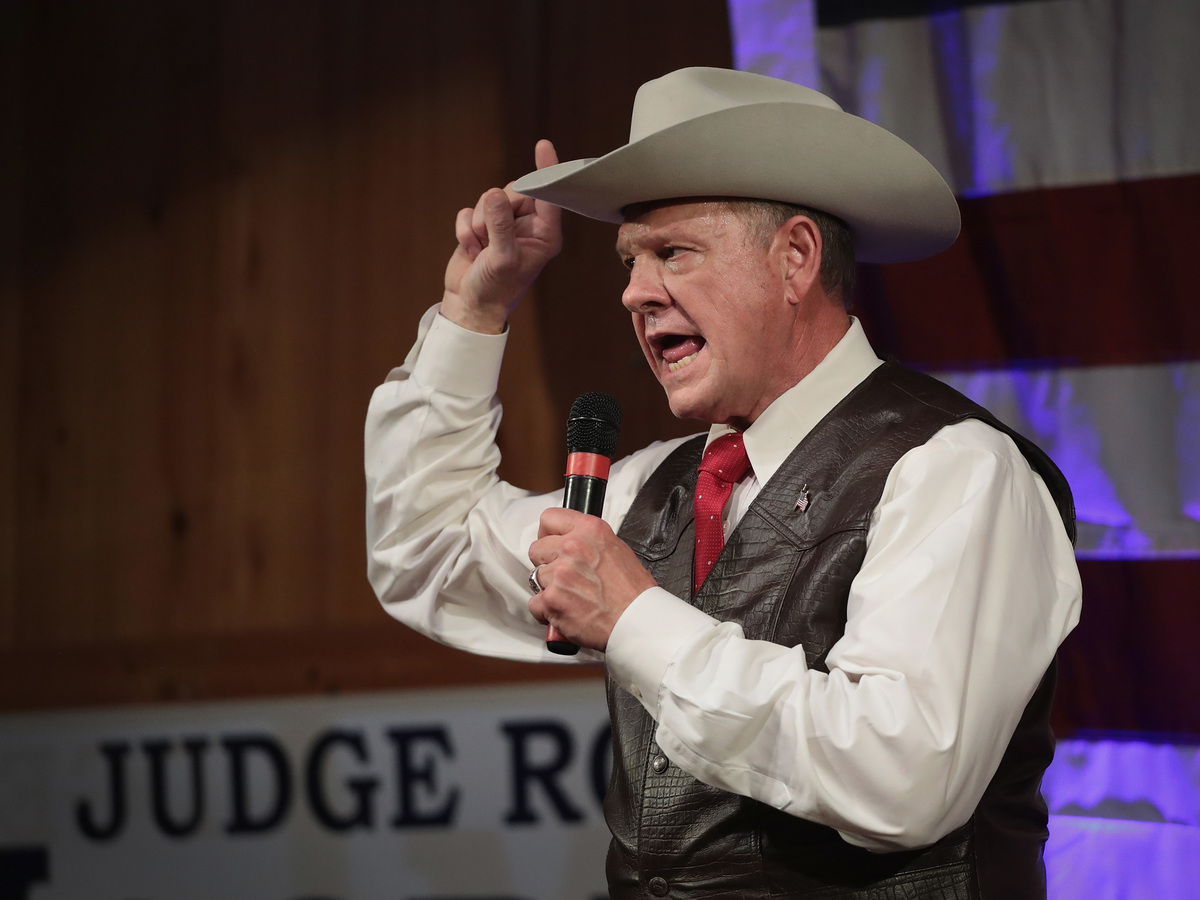 U.S. Senate candidate Roy Moore faces allegations that he acted inappropriately toward a 14-year-old girl when he was 32.

With his U.S. Senate campaign in Alabama suddenly endangered by allegations that he had sexually abused a minor, GOP candidate Roy Moore sought to turn the crisis to his political advantage by portraying it as an "us vs. them" confrontation.

"We are in the midst of a spiritual battle with those who want to silence our message," he tweeted.

Throughout his career as an Alabama judge, Moore has been seen as a staunch conservative Christian, and some of his evangelical supporters immediately rushed to his defense. One state poll last week suggested the harassment allegation has even strengthened his support among Alabama evangelicals; those who said it made them more likely to support Moore actually outnumbered those who said it made them less likely.

Outside Alabama, however, many evangelicals are troubled. Conservative Christians have long railed against the evils of secular liberalism, and reports of sexual misconduct by Hollywood celebrities have fueled that narrative. With those misconduct charges now leveled against one of their own, evangelicals find themselves in a difficult position.

"This is not something [where] we can say, 'This doesn't happen to us, because we're good and they're bad,' " says Katelyn Beaty, editor-at-large for Christianity Today, the magazine founded by evangelist Billy Graham. "This happens in every institution and in every community, and we would be naive to think it doesn't happen among, quote-unquote, our people.' "

Indeed, the evangelical community may have some issues of its own where sexual harassment is concerned. When Kathryn Brightbill read reports of Moore pursuing teenage girls, it brought back memories of what she had encountered growing up in a fundamentalist Christian community.

"As a teenager, I attended a lecture on courtship by a home-school speaker who was popular at the time," Brightbill wrote in a commentary published by the Los Angeles Times. "He praised the idea of 'early courtship' so the girl could be molded into the best possible helpmeet for her future husband."

After the column was published, other evangelical women wrote to Brightbill to share similar experiences.

"I'm hearing a lot of stories," Brightbill told NPR, "with people saying, 'I saw this play out in my church or home-school community.' Often, it involves youth pastors becoming involved with 14- or 15-year-old girls."

Even before the Roy Moore case, evangelical Christians had been challenged over their apparent tolerance for sexual misconduct among politicians allied with their cause. Exit polls suggested that about 80 percent of white evangelicals backed Donald Trump in the 2016 election, despite his multiple marriages and boasts of sexual conquest.

An oft-cited poll by the PRRI survey firm found that whereas only 30 percent of white evangelicals in 2011 thought elected officials who commit an immoral act could still fulfill their public duties, that share rose to 72 percent in 2016.

"This dramatic abandonment of the whole idea of 'value voters' is one of the most stunning reversals in recent American political history," says Robert P. Jones, the survey firm's CEO. "There's been this shift from a kind of values- or principle-based political ethic to a utilitarian political ethic, where the ends justify the means."

The willingness of white evangelicals to overlook the transgressions of their preferred politicians troubles some of their leaders. Russell Moore, president of the Ethics and Religious Liberty Commission of the Southern Baptist Convention, chided his fellow evangelicals for supporting Trump during the presidential campaign, and in the aftermath of the allegations regarding Roy Moore (no relation), he again expressed his dismay.

"Christian, if you cannot say definitively, no matter what, that adults creeping on teenage girls is wrong, do not tell me how you stand against moral relativism," Russell Moore tweeted.

He was not alone in decrying the evangelical support for Judge Moore. Ed Stetzer, executive director of the Billy Graham Center for Evangelism, referred obliquely to the Moore case during a sermon Sunday at the Moody Church in Chicago.

Stetzer was especially critical of Alabama State Auditor Jim Zeigler, who Stetzer said was "nearly blasphemous" for comparing Judge Moore's alleged dalliance with girls to the biblical story of Joseph and Mary, the mother of Jesus, because Joseph was supposedly an adult and Mary was a teenager when they married.

"A lot of people are wondering, 'What do these crazy Christians believe?' and that just fed into a narrative," Stetzer told NPR. "Somebody's just gotta say, 'This is not what we believe.' "

For some evangelical women who may be dealing with sexual harassment, the challenge presented by the accusations against Moore is especially acute.

"People who have had this type of trauma in the past are looking to see the reaction of the church," says Morgan Lee, who hosts a podcast for Christianity Today. "It's determining whether [the church] is something they can put their trust in, or [whether they] leave feeling more cynical.