Accessibility links
2 Months After Maria And Irma, U.S. Virgin Islands Remain In The Dark More than 33,000 people have applied for help from FEMA, as the territory struggles to recover from Hurricanes Irma and Maria. Nearly 73 percent of residents remain without power two months later.

2 Months After Maria And Irma, U.S. Virgin Islands Remain In The Dark

2 Months After Maria And Irma, U.S. Virgin Islands Remain In The Dark 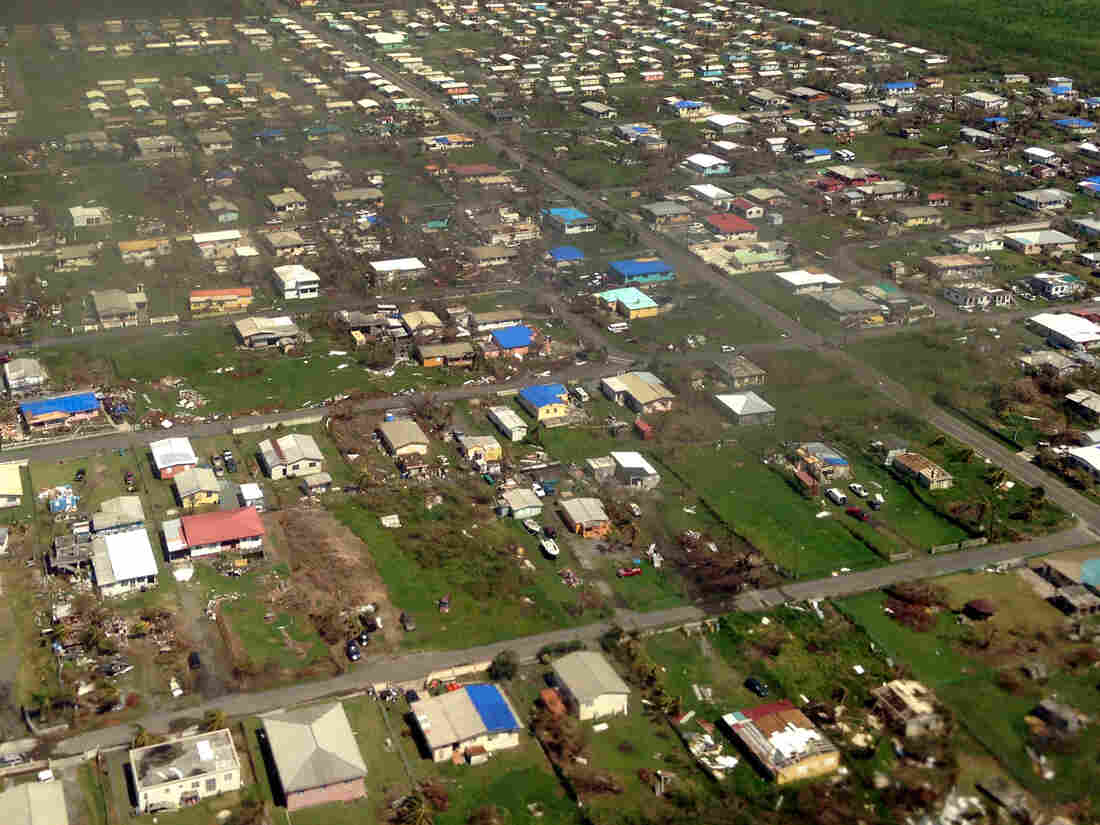 The Virgin Islands is home to more than 106,000 Americans. More than 33,000 people, which is over a third of the U.S. territory's population, are still awaiting help from FEMA. Ken Thomas/AP hide caption 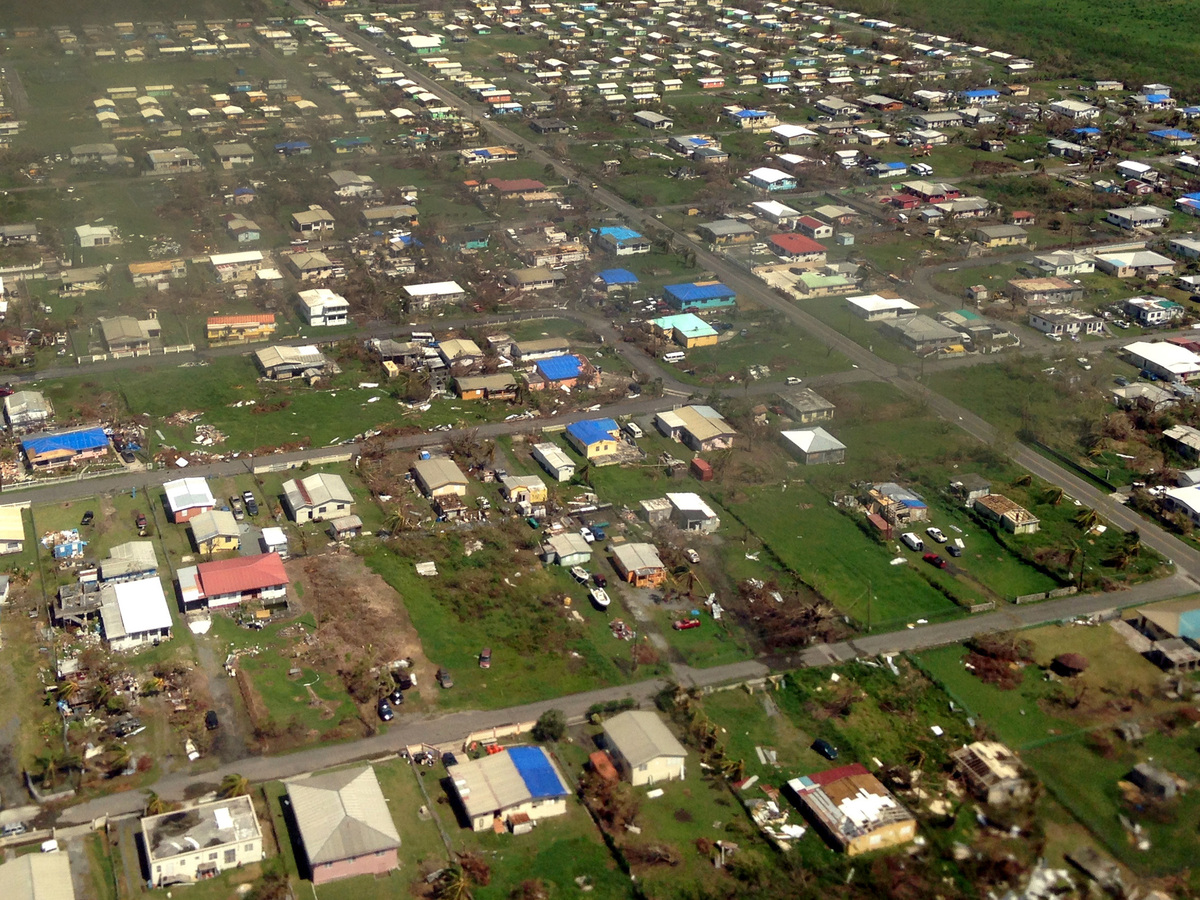 The Virgin Islands is home to more than 106,000 Americans. More than 33,000 people, which is over a third of the U.S. territory's population, are still awaiting help from FEMA.

The continuing blackouts in Puerto Rico after Hurricanes Irma and Maria have overshadowed the devastation in the neighboring U.S. Virgin Islands, where nearly 73 percent of residents remain without power two months after the Category 5 storms made landfall.

More than 33,000 people, which is over a third of the U.S. territory's population, are awaiting help from the Federal Emergency Management Agency. The Virgin Islands are home to more than 106,000 Americans, according to the most recent census data.

"The damage is just so pervasive," says Fredreka Schouten, a reporter for USA Today who returned to her native St. Croix and St. Thomas this month.

Schouten tells Here & Now's Robin Young that she could sense the severe devastation as she flew into Frederiksted, the historic port town where she was born.

"The line of beaches along Frederiksted ... [were] just pounded clean of sand to stone left from the storm surge," she says. "And then as we got closer and sort of turned to make our landing, I started to see the blue tarps covering scores and scores of homes on the southwest corner of the island."

The Virgin Islands Power and Water Authority is continuing efforts to restore electricity and reconstruct the power grid, bringing back power for more than 16,000 customers this past weekend and on Monday.

"With supplies to include poles, transformers, wire and other hardware arriving weekly, the Authority remains committed to its goal of restoring 90% of all areas across the Virgin Islands by Christmas 2017," the public utility wrote last week on Facebook. "Another 200 off-island linemen are expected to arrive over the next few days to augment the restoration effort."

The boil-water notice was also lifted last week for St. Thomas and St. John but remains in effect for St. Croix. People who don't have access to bottled water are advised to boil water for at least one minute before drinking.

Gov. Kenneth Mapp told Here & Now's Jeremy Hobson in September that the damage was so extensive because "St. John and St. Croix and St. Thomas really hold a lot of the main infrastructure, particularly St. John is reliant on the infrastructure of St. Thomas."

"There is a federal law that says that basically after disasters you rebuild to the standard that was there," Schouten says. "And there is increasing talk ... to change that and actually bill to a 21st century standard. Because their argument is this is just a waste of taxpayer money — hurricane after hurricane rebuilding the same way you always have."

In addition to exposing the rocks on the beaches, this year's hurricanes also uncovered longstanding financial issues in the Virgin Islands. The government owes more than $2 billion to bondholders and creditors, which represents the highest per capita debt of any state or U.S. territory — even Puerto Rico.

The Virgin Islands, After Irma: 'It Was Like Stepping Onto Another Planet'

Schouten says the territory's financial woes were magnified when a large oil refinery in St. Croix shuttered its doors in 2012.

"It was the single largest private employer, and they need to find other other folks too who are willing to invest in the Virgin Islands and diversify the economy," she says.

Questions also remain about how the government managed its money. Officials have increasingly relied on borrowed money to operate, and Schouten reports that at times this year, the government only had a few days worth of operating cash available.

Schouten recalls returning to St. Croix after Hurricane Hugo in 1989, when more than 80 percent of the island's buildings were leveled. The storm set the island back 20 years, and discouraged tourists from visiting, she says.

In a statement this week, FEMA urged cultural institutions to apply for disaster assistance. Schouten says there is concern that if too many American citizens leave the Virgin Islands, it will undermine the territory's recovery.

"There is a feeling that the Virgin Islands won't be the Virgin Islands if too many people who are from there and make up the place in the culture leave," she says. "But I do think that the sense from local authorities is that they are going to get assistance."